A vibrating mask may make it easier and faster to treat people with breathing problems such as emphysema.

The device is a new type of nebuliser — commonly used for inhaling liquid medicine via a mask — and features a mesh that shakes more than 100,000 times a second.

This is thought to greatly reduce the size of the medication particles, so they penetrate inflamed airway tissue more easily and reduce symptoms faster than traditional nebulisers.

The device is a new type of nebuliser — commonly used for inhaling liquid medicine via a mask — and features a mesh that shakes more than 100,000 times a second (stock photo)

After a trial in the U.S. showed the device could reduce hospital admissions and led to a 75 per cent drop in medication, a study is under way in Ireland.

Chronic obstructive pulmonary disease (COPD) is an umbrella term for lung conditions such as emphysema and chronic bronchitis that make it hard to get air in and out of the lungs as the airways become inflamed and narrow.

This causes coughing, breathlessness and wheezing and usually develops as a result of smoking, but pollution and genetics can also be implicated. Over time, the walls of the airways thicken and more mucus is produced.

The lung tissue starts to lose its elasticity and the cells deteriorate, causing air to become trapped. This makes the diseased area of the lung expand, compressing the healthier areas, and making breathing increasingly difficult. 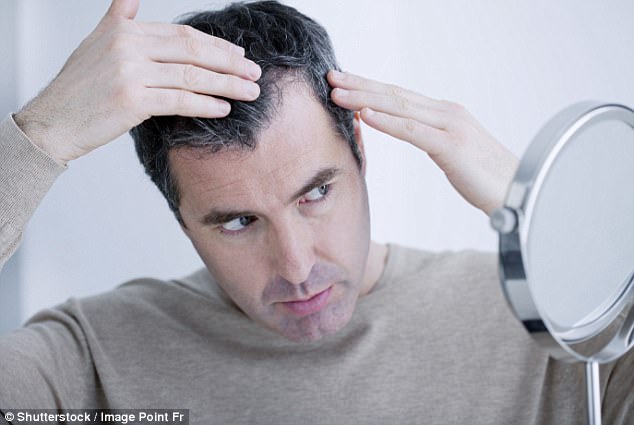 A cure for baldness might be on the horizon after U.S. scientists discovered a new way to activate stem cells — which have the potential to turn into other cell types — in the hair follicle, making hair grow

Treatment involves medication, often through nebulisers, to reduce inflammation and relax the airways. Conventional nebulisers use a motor to convert a liquid medicine into tiny droplets which are then inhaled through a mask.

The new Aerogen Solo mask has a 5mm-wide vibrating mesh with 1,000 perforations which shrinks the droplets of medicine further.

As the liquid medicine passes through the device, this mesh vibrates 128,000 times a second. The smaller droplets it creates mean the medicine is absorbed faster and in greater concentrations. This is thought to reduce symptoms more quickly and stop patients needing to stay in hospital for treatment and monitoring.

In a study of COPD patients last year at St John Hospital & Medical Center in Detroit, those who used the device had 32 per cent fewer admissions to hospital.

Doctors will compare lung capacity, symptoms such as breathlessness and coughing, as well as length of hospital stays.

Commenting on the device, Dr Richard Russell, a consultant chest physician and medical advisor to the British Lung Foundation, says: ‘Being able to deliver medication efficiently and safely is essential to improving outcomes in patients with COPD.’

He adds: ‘Patients often find nebulisers hard to use, so any novel technology that enhances the delivery and makes it easier for patients is very welcome.

‘This new technology is an exciting development and will enhance patient care.’

Meanwhile, having a flu jab could lower the risk of flare-ups in COPD patients. A new study found viral infections may account for up to 50 per cent of attacks, while more than a quarter of those affected had the flu virus.

Research in the Journal of Microbiology, Immunology and Infection compared respiratory failure rates in patients who had been vaccinated against flu and those who had not — those who’d had the vaccine had a 17 per cent lower risk, the study from Yang-Ming University in Taiwan said.

A cure for baldness might be on the horizon after U.S. scientists discovered a new way to activate stem cells — which have the potential to turn into other cell types — in the hair follicle, making hair grow.

Writing in the journal Nature Cell Biology, researchers claim that by increasing the production of a chemical called lactate inside hair cells they could coerce the stem cells in an otherwise dormant hair cell into growing.

They are now experimenting with two drugs — known as RCGD423 and UK5099 — which have separate mechanisms but both ultimately increase lactate production in hair cells when applied to the skin.

The hope is that this will lead to new drugs for baldness and alopecia.

Scientists have developed a saliva test for quicker diagnosis of endometriosis, a condition where cells similar to those in the womb lining grow elsewhere in the body.

The test detects genetic material in body fluids, called microRNAs, thought to be higher in those with endometriosis, according to a study by its U.S. developer DotLab in the journal Fertility And Sterility.

One in ten women have endometriosis, which causes pain, exhaustion and infertility. Diagnosis is often delayed as symptoms are dismissed. The home test is sent to the U.S. for analysis and is expected to be available to buy online soon.

Clothes intertwined with high-tech capsules have been designed to soothe sensitive skin conditions such as eczema.

Researchers at the Centre for Nanotechnology and Smart Materials in Portugal have been inserting essential plant oils into capsules that are hundreds of times smaller than the width of a human hair. 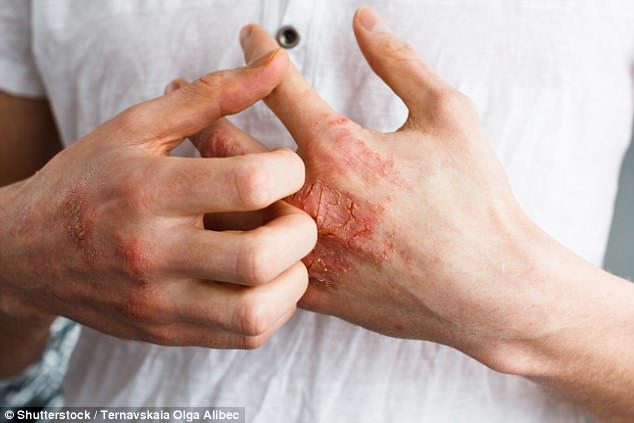 The capsules are programmed to release their contents when they come into contact with the microbes on the skin that cause conditions such as eczema.

The capsules are attached to clothing fibres using strong chemical bonds to ensure they survive washing.

Further research will be undertaken before trials on humans start.

How Viagra could help high blood pressure in pregnancy

Women who develop a common pregnancy complication may benefit from a drug normally prescribed for erectile dysfunction.

In a new trial at Assiut University Hospitals in Egypt, 80 pregnant women with pre-eclampsia — high blood pressure during pregnancy — are being prescribed sildenafil (the chemical name for Viagra), or a placebo. Maternal blood pressure, as well as the health of the foetus, will be monitored.

The drug dilates blood vessels, increasing blood flow to the penis for those with impotence. In theory it will also reduce blood pressure and resistance to blood flow in placentas.

■ There are more than 100 new drugs being tested as a treatment for Alzheimer’s. The good news is 70 per cent are disease-modifying drugs, designed to target the cause of the disease, not just symptoms, according to a report in the journal Translational Research & Clinical Interventions.

Tiny diamonds inside your teeth may help to prevent infection after undergoing root canal surgery.

But this can break and create pockets for bacteria to invade, leading to infection. Now researchers at the University of California, Los Angeles, have added diamond fragments to gutta-percha and found that, in tests on three patients who had root canal work, it made the seal more resistant.

The team suggests diamonds could be useful in a number of ways in healthcare, including boosting resistance to microbes.