This is the moment a thug kicks a homeless man in the face in a sickening attack outside a shop.

Dash camera footage shows the three thugs on bicycles approach the defenceless man sitting in a sleeping bag outside a Tesco store in Dale Street in Liverpool.

The trio approach the homeless man before one bends down in front of him and appears to be shouting in his face.

His friends remain straddling their bikes beside him as he begins angrily gesturing at the homeless man who has his arms tucked inside his sleeping bag.

The thug briefly looks away before lifting his leg and viciously kicking the homeless man.

The force causes the man’s head to bounce off the window behind him and a person in the car filming is heard exclaiming: ‘Oh my God! That’s not nice’. 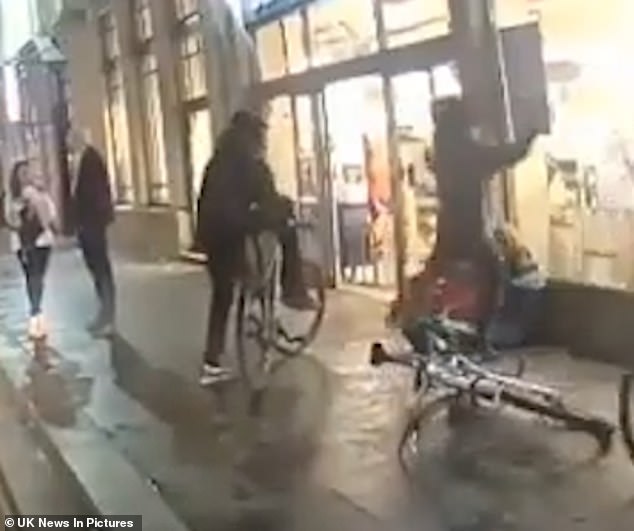 A man and a woman nearby witness the attack, and the woman covers her face in horror.

The trio then cycle away as the two witnesses come over to check if the man is okay.

The footage, which has gone viral, has sparked a furious outcry, with the video being shared on Instagram, where the caption said the homeless man was ‘left with a bleeding and most probably broken nose’. 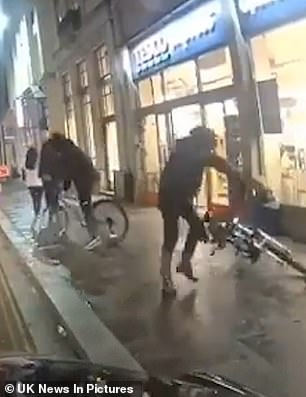 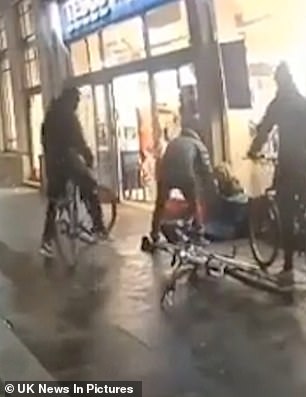 The three thugs make a getaway on their bikes while a horrified pair of witnesses watch. The homeless man sits in a sleeping bag while the thug shouts in his face

They said: ‘Someone I know has just witnessed this absolutely VILE behaviour on a homeless man outside Tesco on Dale Street.

He needs to be caught and handed over to the police because this is not okay! If anyone recognises him or has any information about him PLEASE inform the police.

‘This can be done anonymously. He can’t get away with this!’

Police said they are trying to contact the victim and have urged anyone with information to come forward.

A spokeswoman for Merseyside Police said: ‘We can confirm we are currently investigating a video circulating on social media which appears to show a man being assaulted outside the Tesco Express store on Dale Street in Liverpool city centre.

‘Enquiries are currently ongoing to establish when the incident took place, identify the man to check he is safe and well and identify the people who are present in the video.’