Sir John was speaking at a hearing of the Infected Blood Inquiry, which is looking into the infection of up to 30,000 people with HIV or hepatitis C from contaminated blood in the 1970s and 1980s.

Thousands died after contaminated blood products were imported from the US, often from prisoners, sex workers and drug addicts who were paid to give their blood in the incident which has been called the biggest treatment disaster in the history of the NHS.

The independent inquiry was announced in 2017 and began hearing evidence in 2019.

Sir John was asked during a hearing about correspondence within government when it became apparent that compensation for victims would be required.

Sir John was speaking at a hearing of the Infected Blood Inquiry, which is looking into the infection of up to 30,000 people with HIV or hepatitis C from contaminated blood in the 1970s and 1980s

1974: Some researchers warn that Factor VIII could be contaminated and spreading hepatitis.

Late-1970s: Patients continue to be given Factor VIII, with much of the plasma used to make the product coming from donors such as prison inmates, drug addicts and prostitutes.

1983: Governments in both the UK and the United States are told that Aids has been spread through blood products.

Mid-1980s: By now the blood products such as Factor VIII, were being heat-treated to kill viruses, but thousands of patients had already been infected.

1991: Blood products imported from US are withdrawn from use. The government awards ex-gratia payments to haemophiliac victims threatening to sue.

2007: Privately-funded inquiry into scandal set up by Lord Archer of Sandwell but it does not get offical status and relies on donations.

2008: Penrose Inquiry launched, but victims claim the seven-year investigation was a ‘whitewash’.

He was asked about a letter he wrote in November 1987, when he was Chief Secretary to the Treasury, where he wrote: ‘I have to say that although in terms of equity, there might seem to be some gains to be made from a positive response, it would seem to have very real dangers.

‘How could such a precedent be ring-fenced? It could lead to an open-ended commitment of huge dimensions.

‘Might it not give rise to court action against the Government because of the implication of negligence?

‘Have the law offices given a view on the possible consequences of a sympathetic response?

‘I do not feel that we can afford to offer such a response until the pros and cons have been thoroughly considered.’

He told the inquiry that he was pointing out the pros and cons must be considered in the letter, including how much compensation should be offered to victims.

He added: ‘There’s no amount of compensation you can give that could actually compensate for what had happened to them.

‘What had happened to them was incredibly bad luck – awful – and it was not something that anybody was unsympathetic to.’

His comments drew angry gasps from some present at the inquiry.

Later, he added that if Baroness (Margaret) Thatcher had been presented with an agreed settlement on compensation for infected blood victims she probably would have accepted it.

‘But underneath the legend of the unyielding Iron Lady was someone who often did yield and often did look at things on a human basis to a much greater extent than she is given credit for.

‘It may not have been universally true but in my experience it often was.’

Following Sir John’s comments, Clive Smith, Chairman of the Haemophilia Society said: ‘Sir John Major’s evidence today that the suffering and death of more than 3,000 people with haemophilia and other bleeding disorders as a result of contaminated NHS treatment is ‘bad luck’ is both offensive and complacent.

‘His evidence is a reminder that successive governments over the last 30 years have refused to accept responsibility for this treatment disaster – and the denial continues.

‘Even now, people are still dying of infection contracted in the 1980s and they are dying without justice.

‘Those infected and affected by HIV/AIDS and hepatitis C caused by NHS-prescribed infected blood and clotting factors continue to fight for accountability, proper recognition of their suffering and compensation.’

Des Collins, senior partner at Collins Solicitors, which represents some victims, added: ‘Apart from his ‘bad luck’ gaffe, Sir John was actually not without sympathy for victims this morning. Yet his evidence was as measured as you would expect.

‘What he did convey was the government in his time clearly understood there was a problem and were anxious to avoid the full cost and ramifications of a negligence action they knew would surely follow.’

Jason Evans, founder of campaign group Factor 8, said that he suspects ‘families will have a lot more questions.

‘I don’t think John Major has been particularly forthcoming in his evidence, he said. ‘His comments about bad luck just fly in the face of all the evidence – expert evidence – we’ve heard.

‘I think it just shows how uneducated he is on the matter. There are people in the room, families and victims, who are very angry, annoyed and frustrated with what was said.’

Victims have long held the belief that the extent of the contamination scandal was covered up. 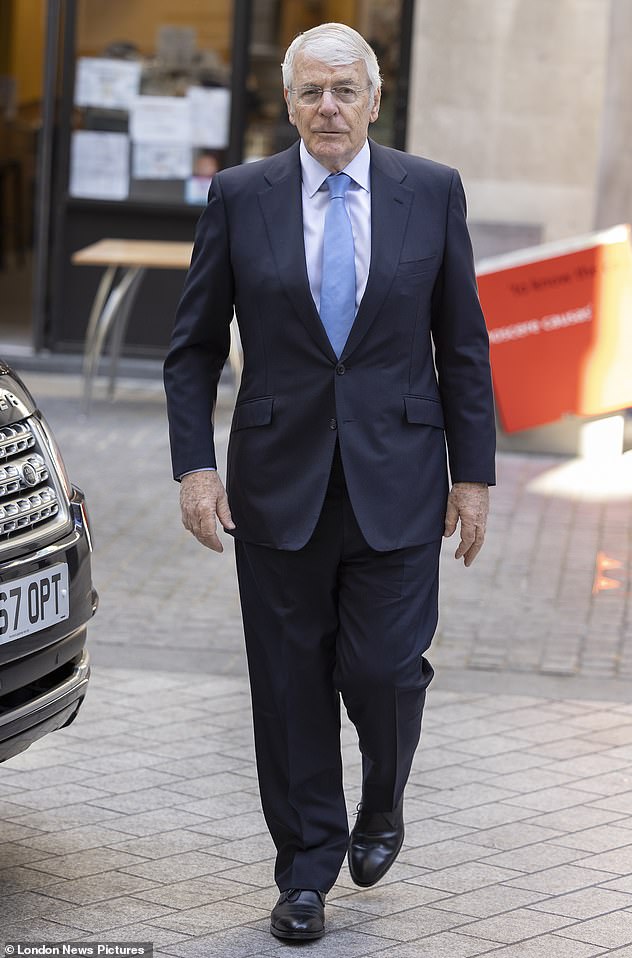 Denise Turton, whose 10-year-old son died after contracting HIV through contaminated blood products, said the comments were ‘horrible to hear’.

‘To say it’s bad luck is horrible to hear, especially after what my son went through. He lost his life, so did many others, and all he says is bad luck.

‘I can’t say what I really want to say. The only thing that is bad luck is that the Government didn’t listen.

‘They were told about the products and didn’t listen – that’s bad luck, not what happened to my son and so many others.’

In evidence heard by the inquiry at an earlier date, haemophiliac Martin Beard, 50, said that he was tested for HIV, without his knowledge, as a 14-year-old, and only told by a doctor that he had the condition during an appointment three years later.

It was not until 2006 that he first saw a 1985 letter between hospitals which said: ‘We note that he is HTLV 3 antibody positive (HIV), but is not aware of this and that you do not wish this to be divulged to him. We shall make every effort to comply with your wishes.’

He told the inquiry: ‘People are accountable.

‘I am not going to sit here and bash doctors, because I don’t believe that all doctors go into the profession to hurt people.

‘They make mistakes along the way. They are human beings.

‘They lose track sometimes of what they’re there for. But this goes higher up than that.

‘There are MPs that are accountable and they should be made to answer and I believe now is the time for justice.’