Napoli have suffered a huge blow in their chase for the Serie A title with star striker Victor Osimhen ruled out for three months with a facial injury, meaning he will miss the African Cup of Nations with Nigeria as well.

Osimhen, 22, sustained fractures to his cheekbone and eye socket during Sunday’s 3-2 defeat by Inter Milan after clashing heads with defender Milan Skriniar.

The Italian side said on Tuesday that the centre forward has undergone surgery on the injury, and will be out for three months as a result. 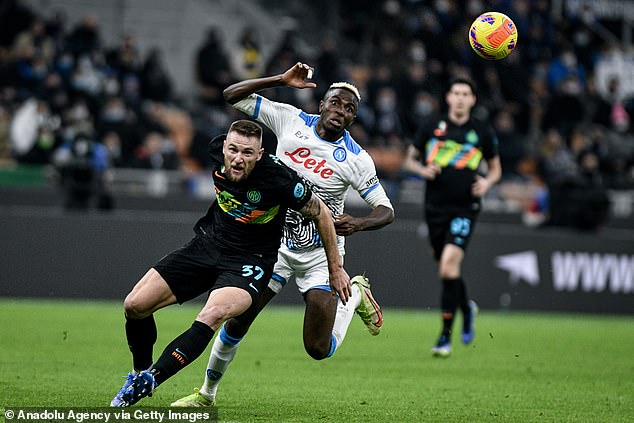 Osimhen has scored nine goals in 14 appearances for Napoli this season, and his injury serves as a devastating blow for the Serie A leaders, who top the table by goal difference after 13 games.

‘On Tuesday morning, Victor Osimhen was operated on his cheekbone and eye socket by Gianpaolo Tartaro, who was assisted by Dr Mario Santagata with Dr Raffaele Canonico also present,’ the club announced.

‘Titanium plates and screws were used in the operation. The player is doing well and will remain under observation for the next few days. 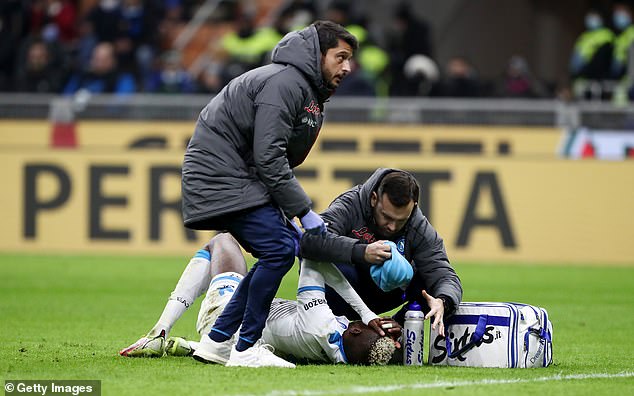 ‘Osimhen is expected to return to action in three months.’

The 22-year-old was the joint top scorer in qualifying for the delayed AFCON tournament with five goals, and has been linked with a switch to the Premier League in recent years.

Arsenal and Chelsea were strongly linked with a move for the striker before Napoli landed their man in a deal worth £74million from French side Lille.