She recently celebrated the tenth anniversary of her eponymous fashion line.

And Victoria Beckham cemented her sartorial prowess as she attended the lavish YouTube cocktail party on Wednesday evening during Paris Fashion Week while being joined by a host of stunning supermodels including Rosie Huntington-Whiteley, Cindy Crawford, Bella Hadid and Kendall Jenner.

The former Spice Girls singer, 44, exuded elegance in a sheer chiffon blouse which flashed a peek of her lace bra underneath at the star-studded bash, while her model counterparts opted for coordinating orange-red looks.

The mother-of-four, who has been making her way around the fashion weeks, teamed the revealing blouse with a pair of sharply-tailored lemon yellow trousers that cinched in her trim figure thanks to the high-waisted design.

She showed off her staggering legs due to the long-line trousers with an elegant pleat extending along the entire length, while the bottoms also helped her stand out among her fashionable peers.

Her brunette tresses were swept back into a glossy, low ponytail, with her locks teased into soft curls. Boasting a sunkissed glow, VB plumped her pout with a slick of lipgloss and framed her eyes with smoky bronze shadow.

Age-defying beauty: Veteran supermodel Cindy Crawford, 52, looked as youthful as ever at the bash, rocking a semi-sheer embellished blouse with tapered trousers as she showed the younger girls how it’s done 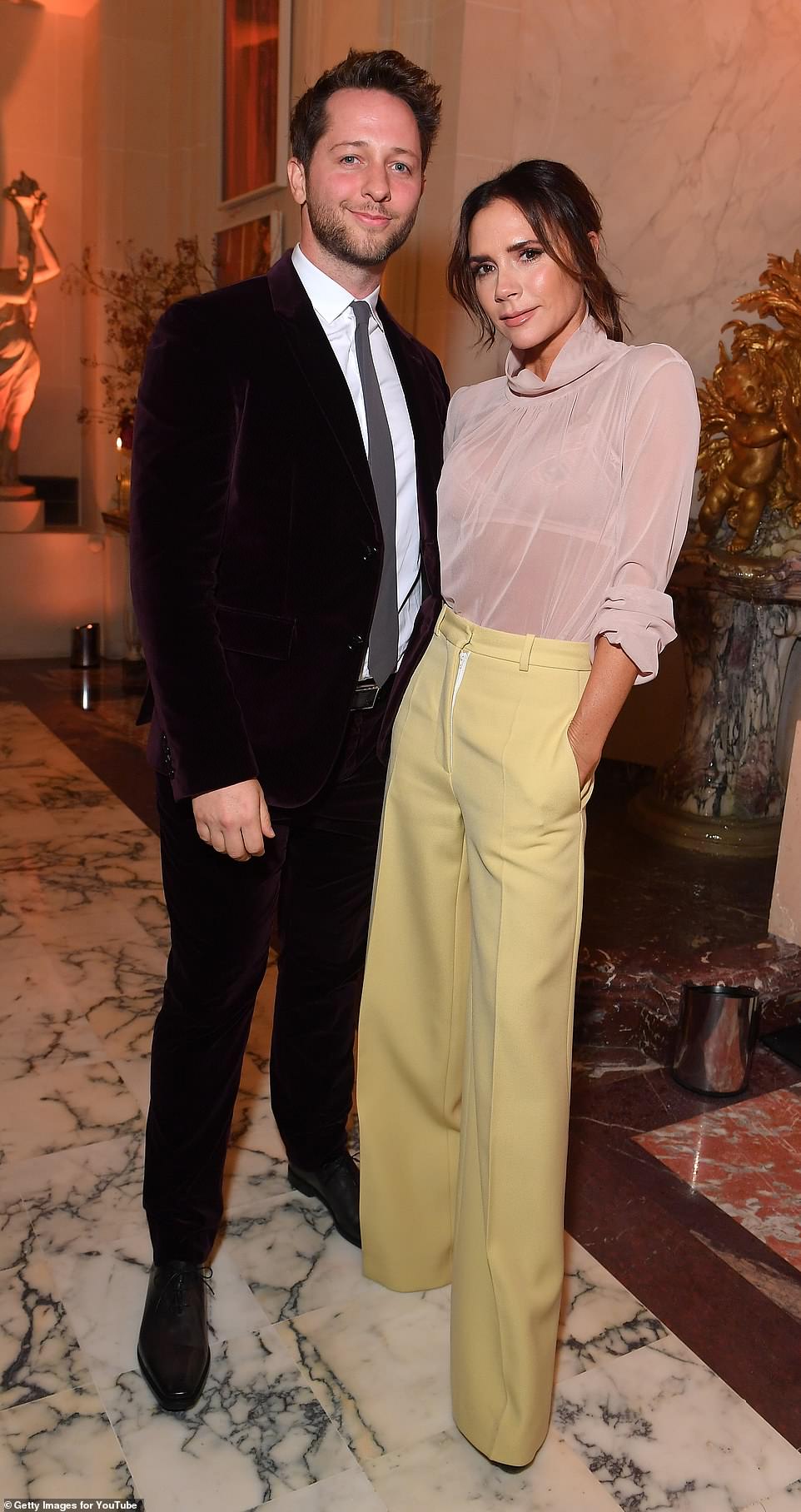 Dare to bare: The former Spice Girls singer, 44, flashed a peek of her lace bra underneath the blouse (pictured with Derek Blasberg)

Hot on her tails was Rosie, who flaunted her phenomenal physique in a red feather minidress and scarlet heels which added a touch of over-the-top drama to the already incredibly chic event.

Bella, meanwhile, opted for a demure vibe in a silky coral midi shirtdress with funky harlequin print cuffs and collar. Shunning the usual high fashion flesh-flashing, she buttoned the dress up to the neck.

Kendall was choosing from the same colour scheme as her pals yet her dazzling diamante laden look set her apart from the others in her chic and stunning look. 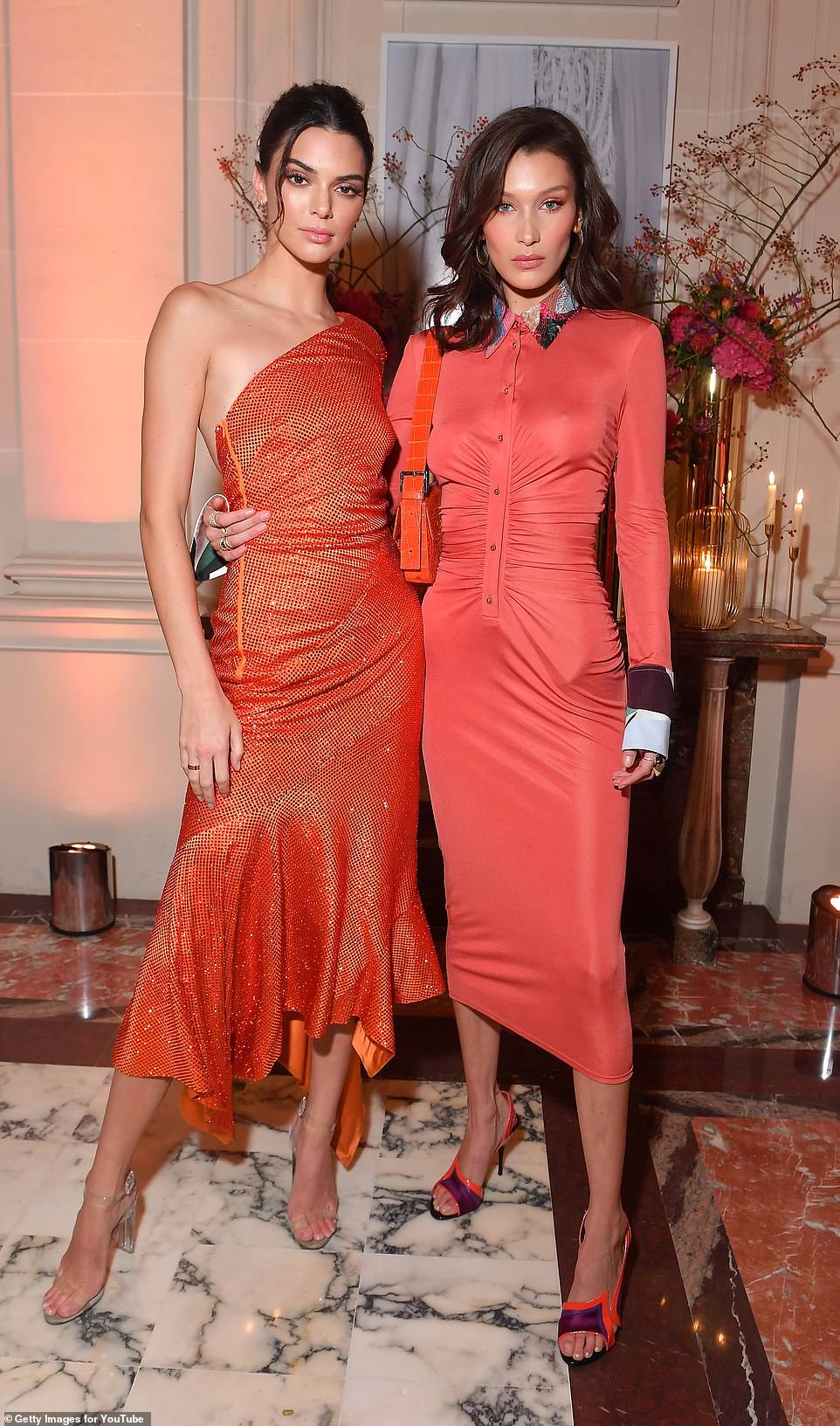 Model behaviour: The best friends flashed their best sultry pouts at the camera 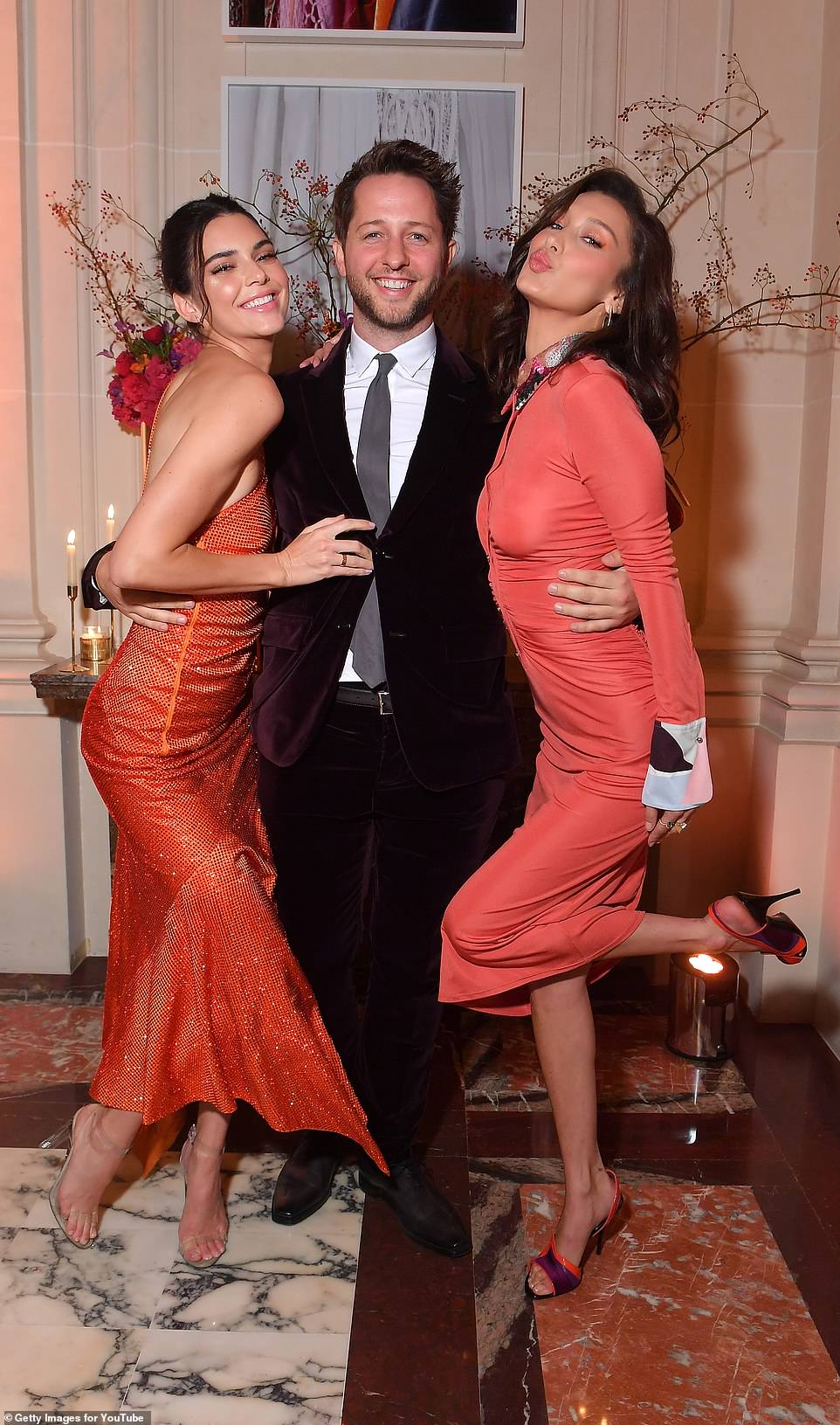 Having a whale of a time: The duo showed off their playful side as they larked around with author Derek But first, let me take a selfie! The brunette beauties happily leaned in to snap some shots 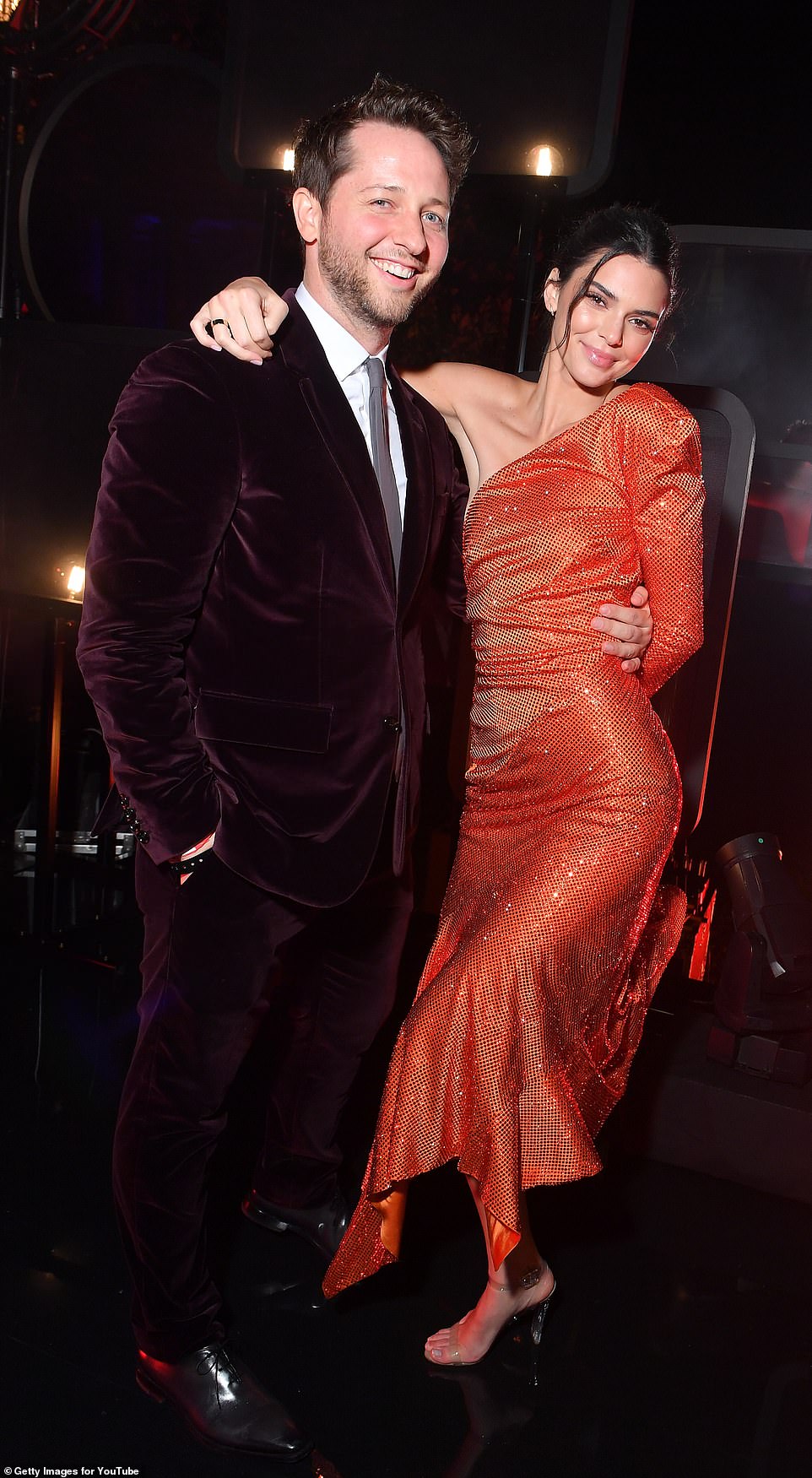 Natural beauty: Kendall let her statement dress do the talking and kept her hair and make-up understated 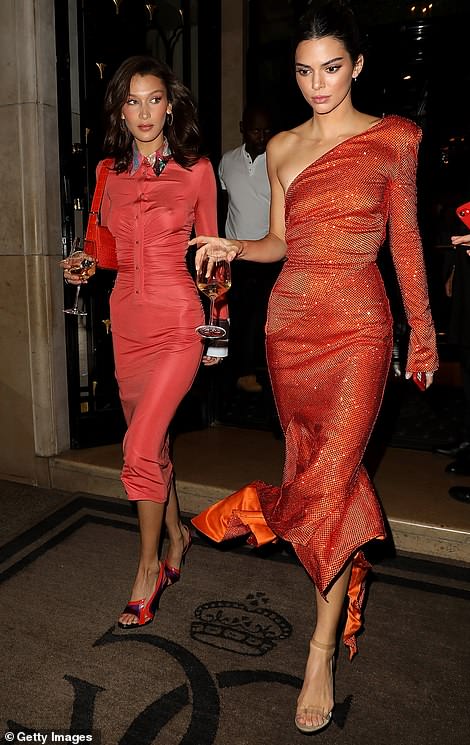 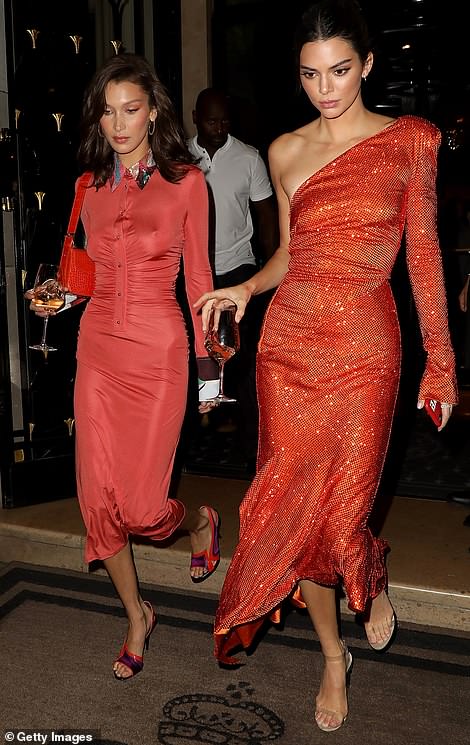 Glug glug! The girls were not content with finishing their drinks inside the event so both departed with a wine glass in hand 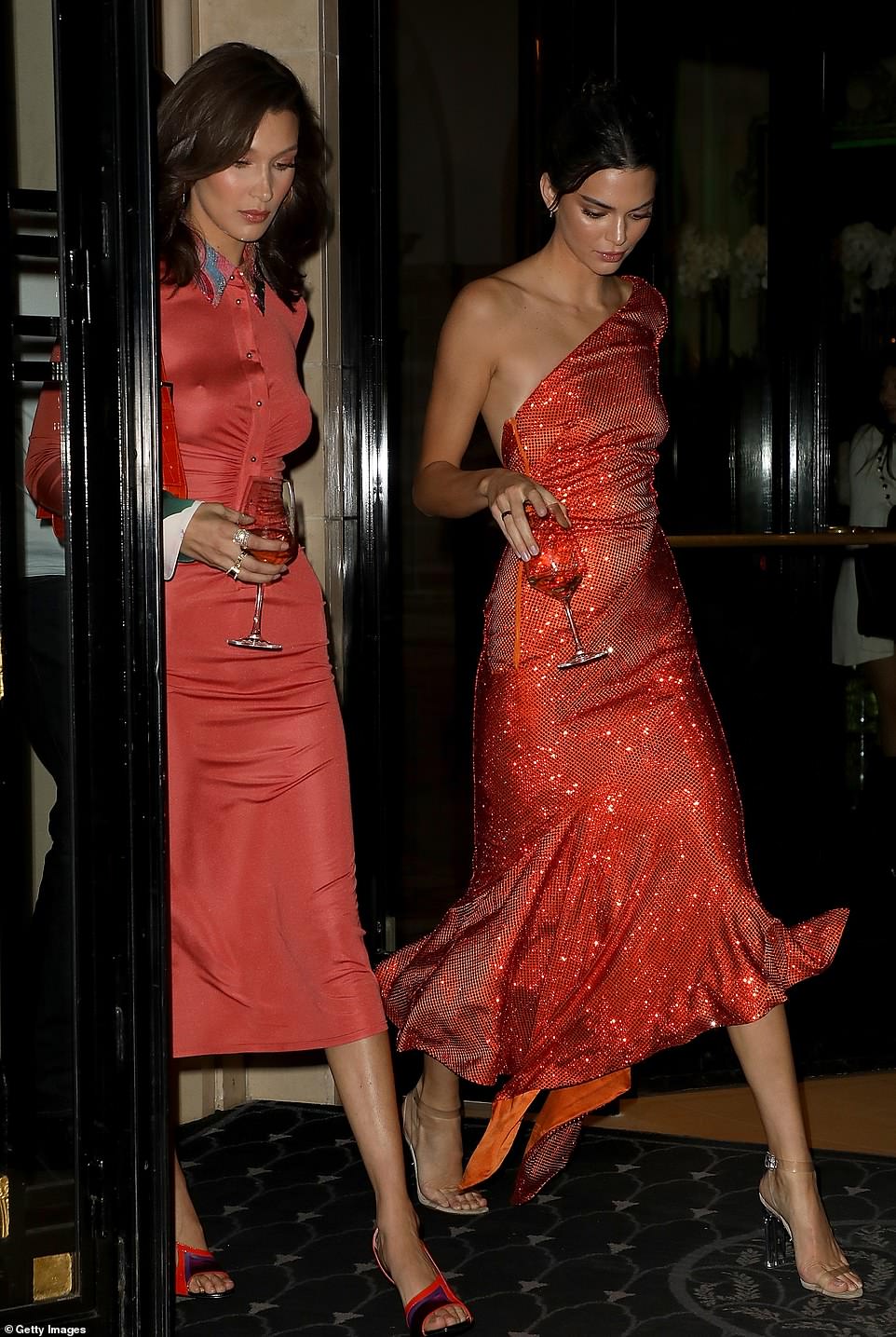 Strutting their stuff: The ladies looked phenomenal after their chic turn at the event

Sky-high: She walked out of the venue in style with her high heels coordinating with her gown

Victoria’s outing comes after she said her style evolution has been ‘a journey’ and she’s learned to keep things ‘simple’ when it comes to her personal look.

‘I never look back and cringe at anything. It’s been a journey and everything has bought me to where I am now. You know, I think it’s about keeping it quite simple, being true to who I am, and being comfortable,’ she told Grazia magazine.

While she is now known for her sartorial prowess, over her two decades in the public eye the Wannabe hitmaker has been mocked more than once for her unconventional choices.

But she hopes the good taste which she has now developed will be passed on to daughter Harper, seven, who she often brings along to fashion shows. 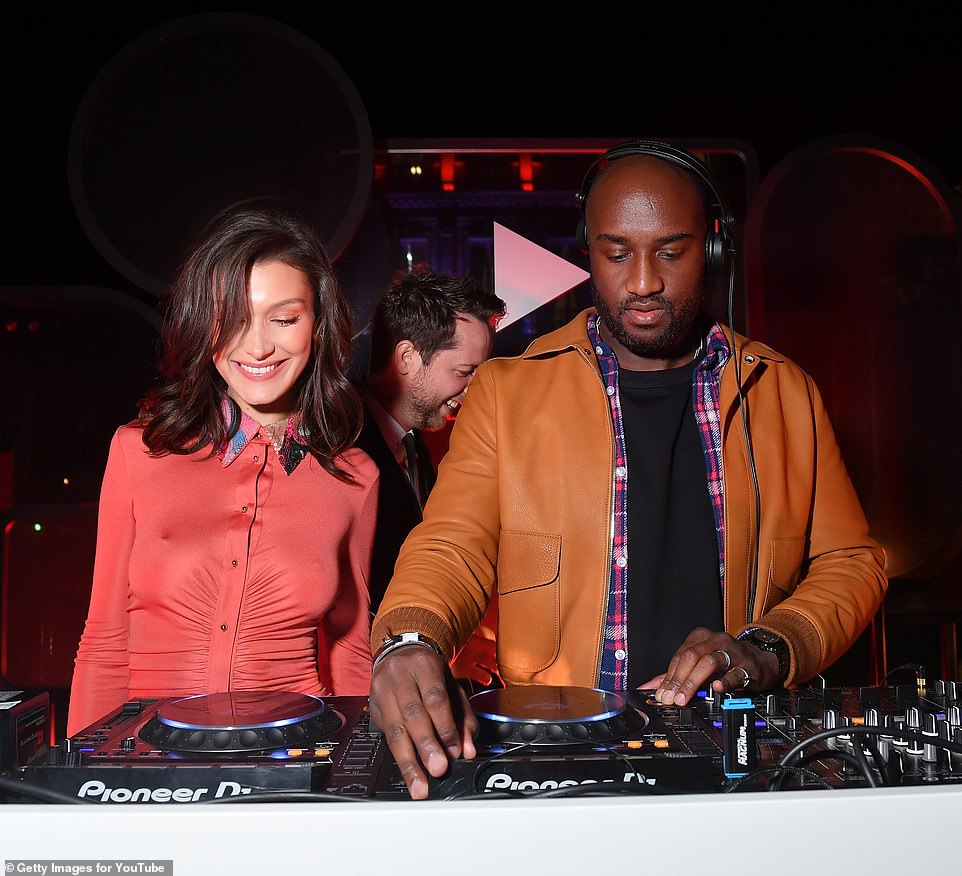 Behind the decks: Bella channeled her inner DJ as she joined designer Virgil Abloh in the booth 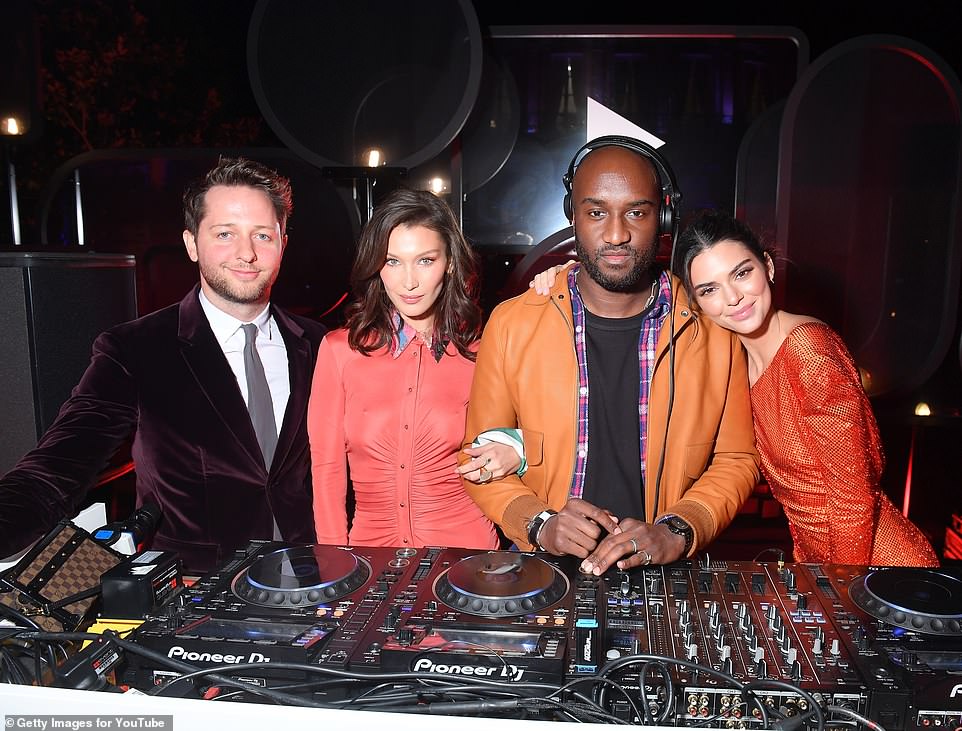 Just hanging out: Kendall and Derek couldn’t resist posing for a snap behind the decks Come here, you! Cindy and Karlie clutched each other’s hands in a warm greeting 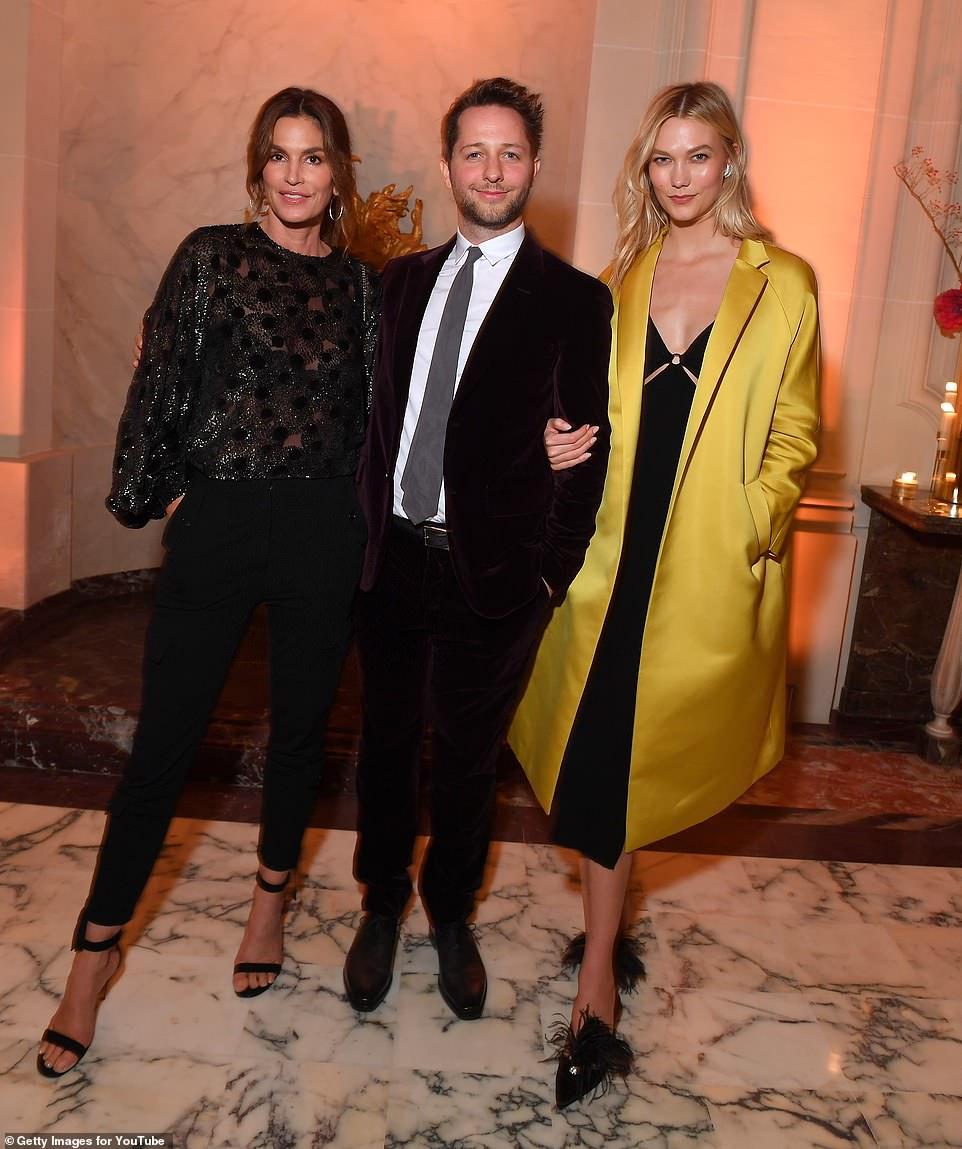 Quite the line-up: The duo linked arms with Derek for a group shot later on 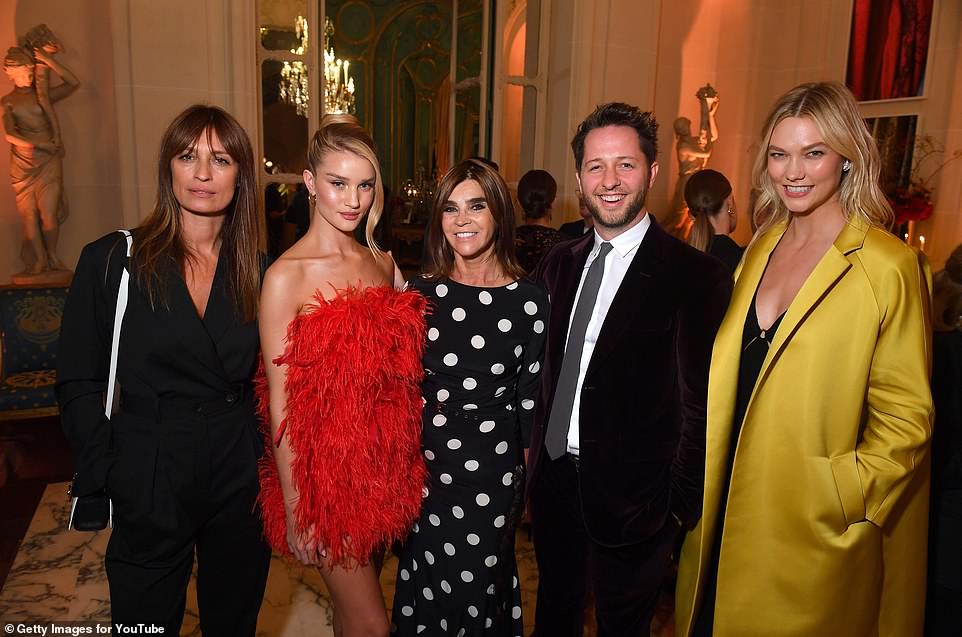 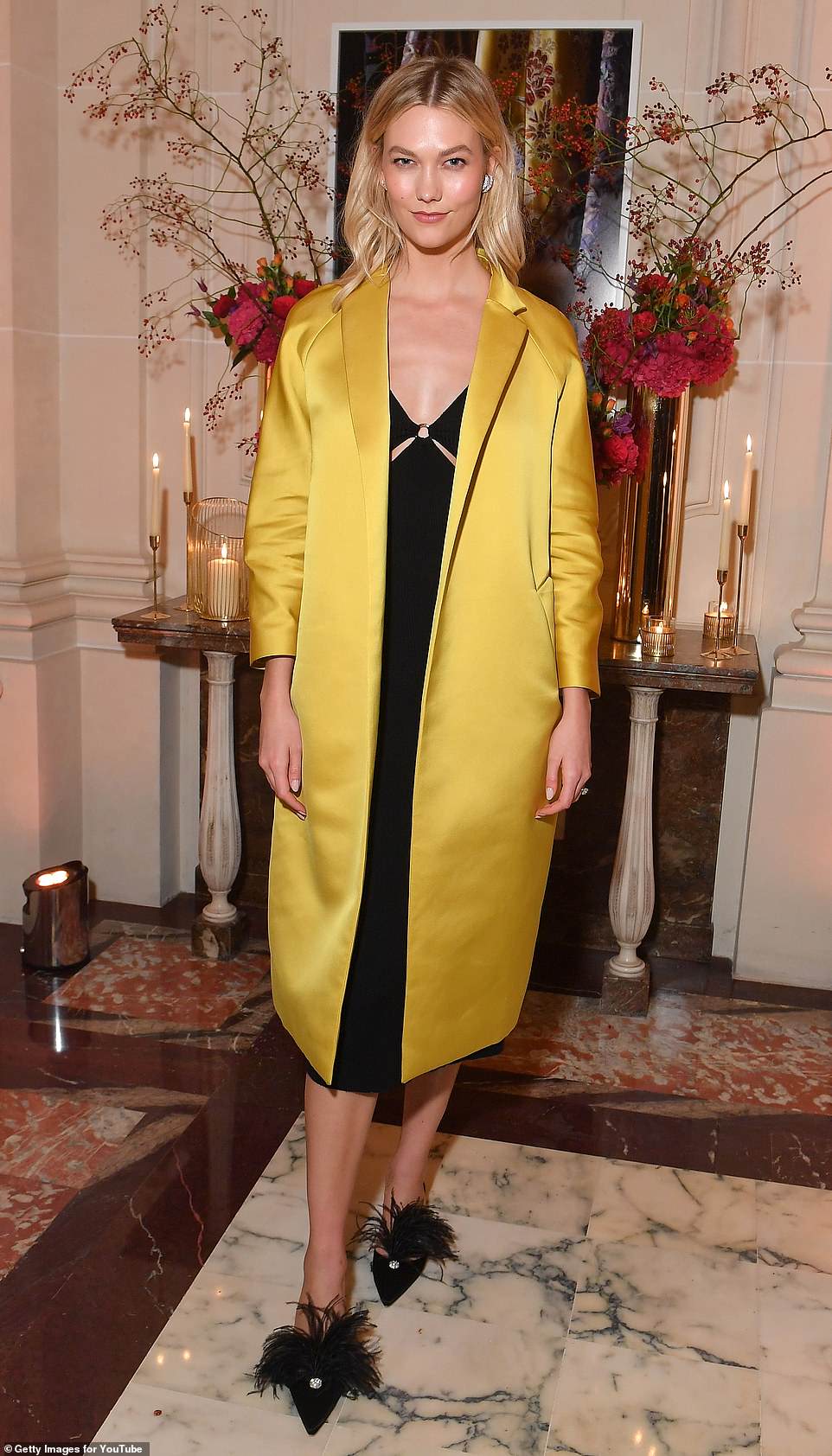 And it was all yellow: Karlie Kloss donned a cut-out slip dress teamed with feather-trim mules and a lemon cocoon coat In good company: She stopped for a snap with British Vogue editor Edward Enninful 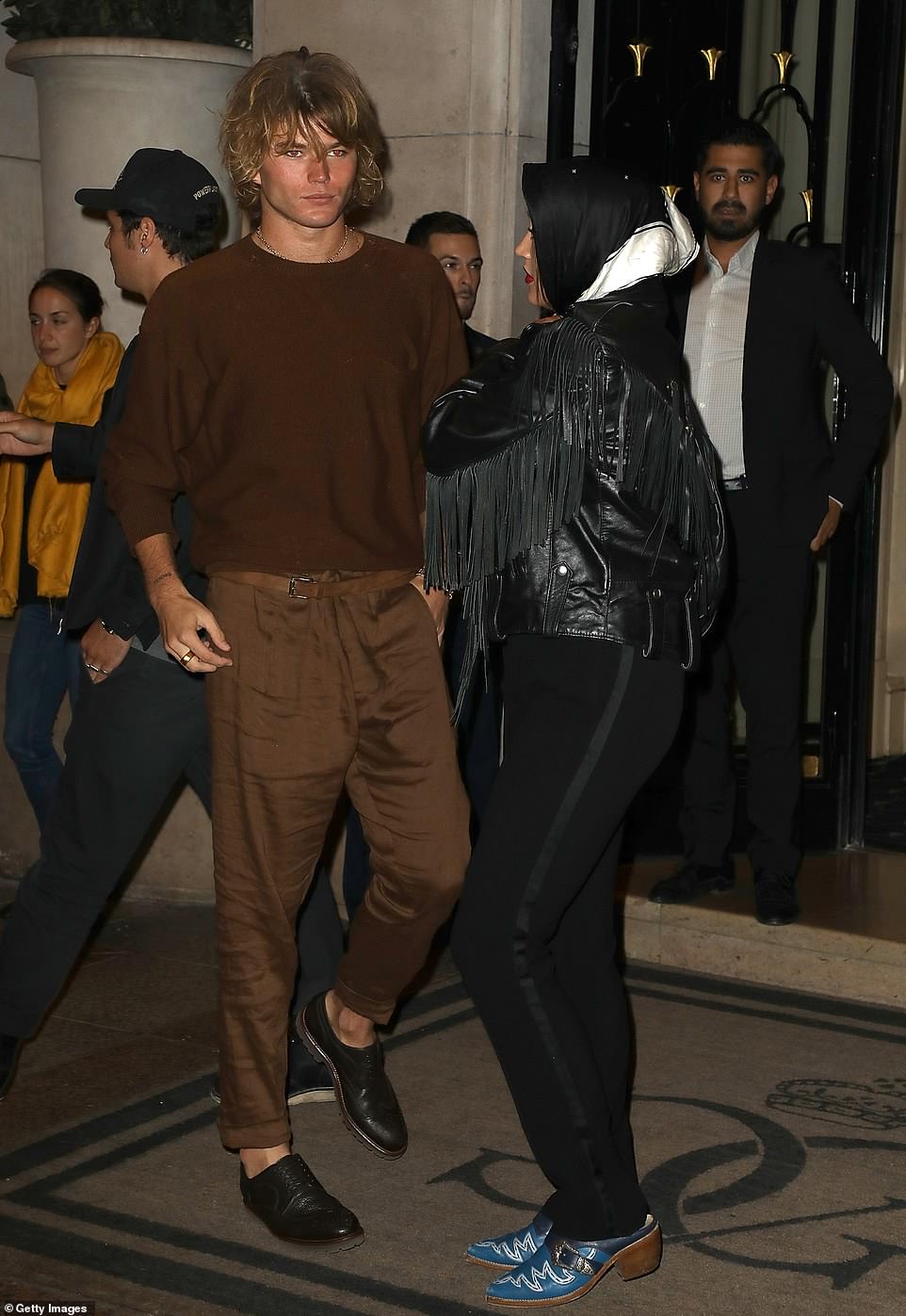 Smouldering: Jordan Barrett was also in attendance but opted for a more casual look that his peers

The Wannabe hitmaker told the publication Harper says ‘Mummy, I want to slick my hair back before lunch!’ and that she’s picking up hair-styling tips from hairdressing guru Guido Palau who she has ‘known since she was three months old’.

The mother-of-four also discussed how she balances her busy schedule, running her fashion line, with looking after her children.

‘The kids are always going to be my priority – the kids come first’ she said. ‘Nine times out of 10 I do the school run. I’m lucky that I’m the boss, so I can do that’. 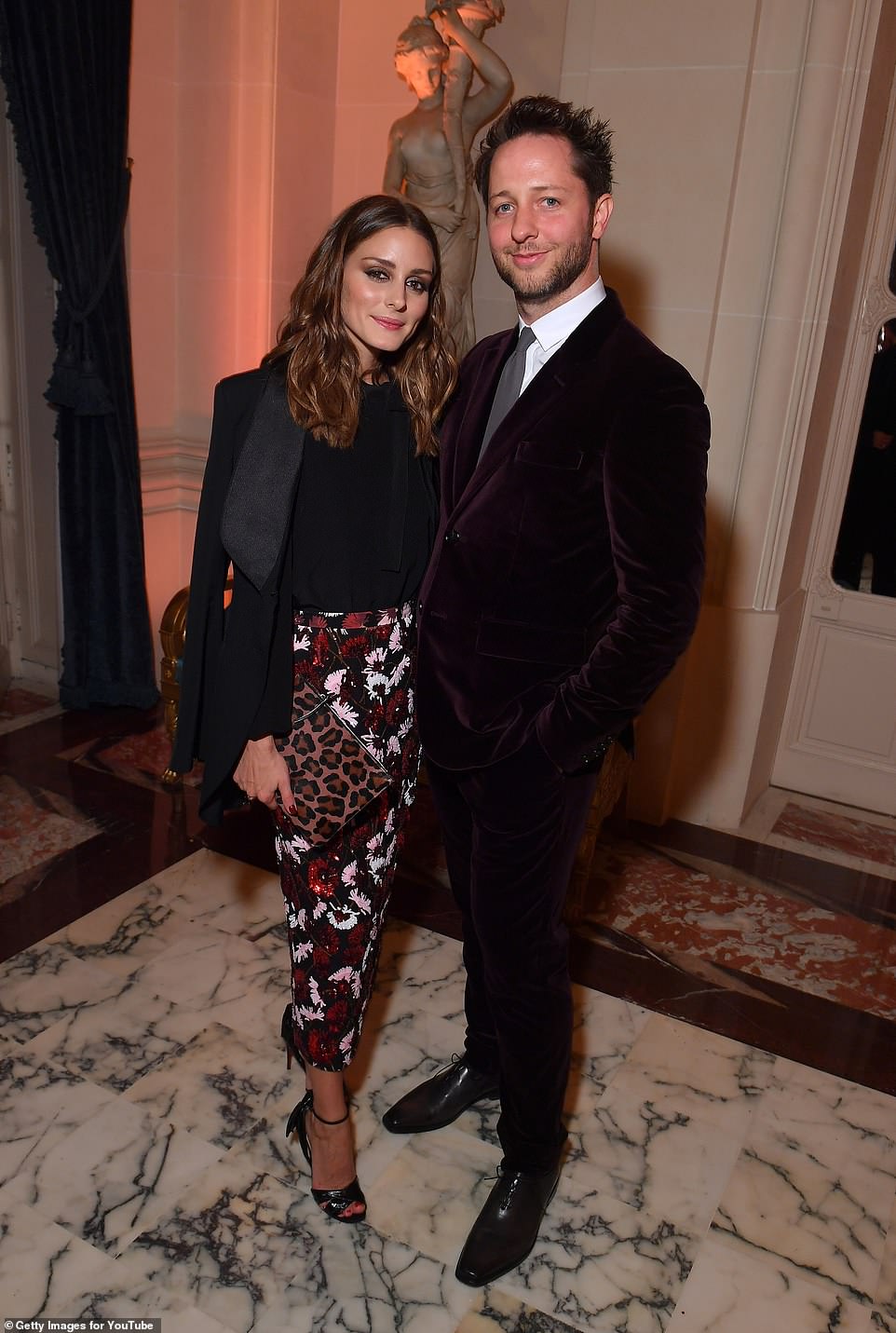 Boy-meets-girl chic: The City star slung an androgynous tuxedo blazer over her shoulders 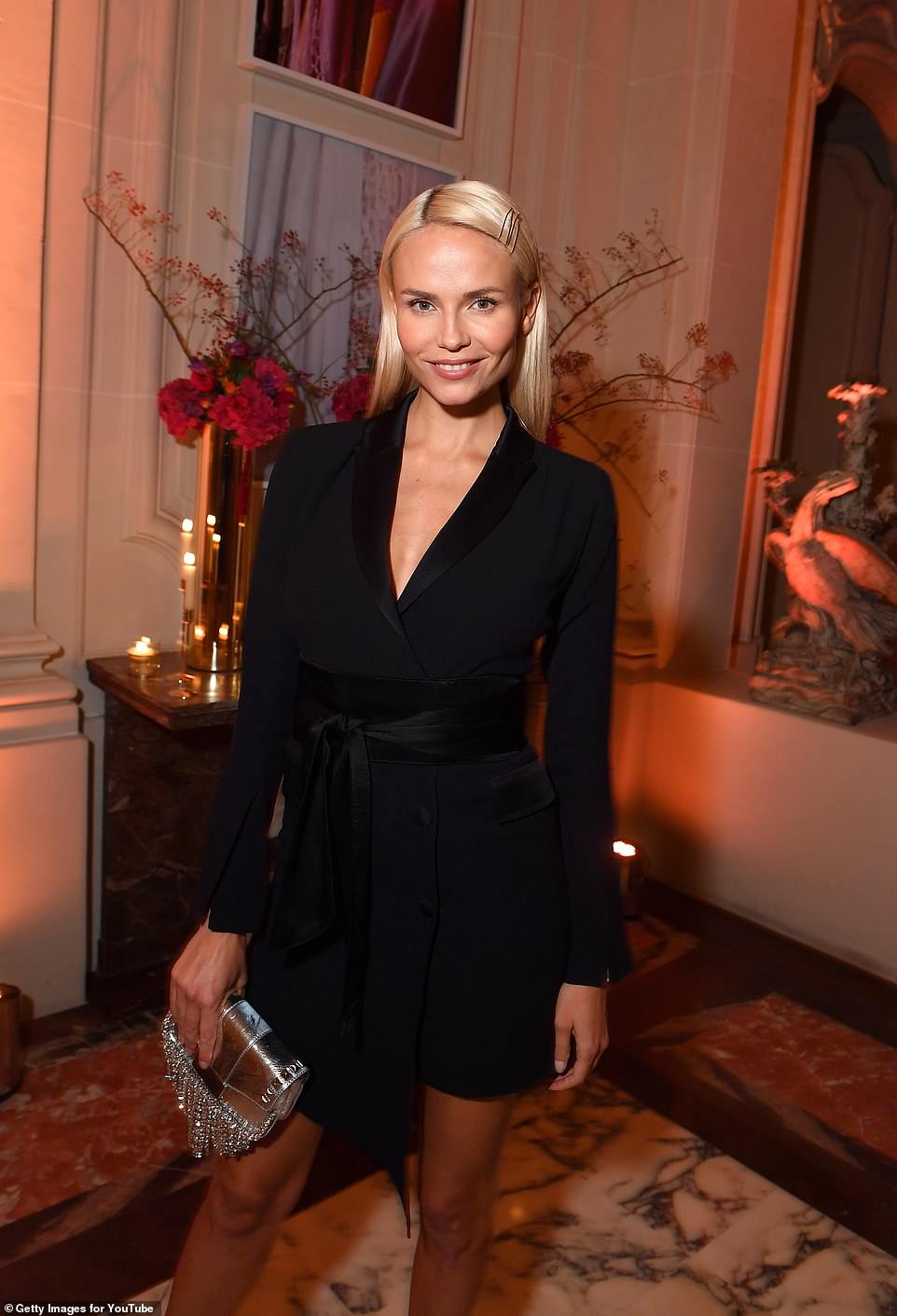 Quite the guestlist: Liya Kebede went for a boy-meets-girl vibe with her shirt and trousers combo, while fellow model Anja Rubik donned a sexy thigh-grazing minidress 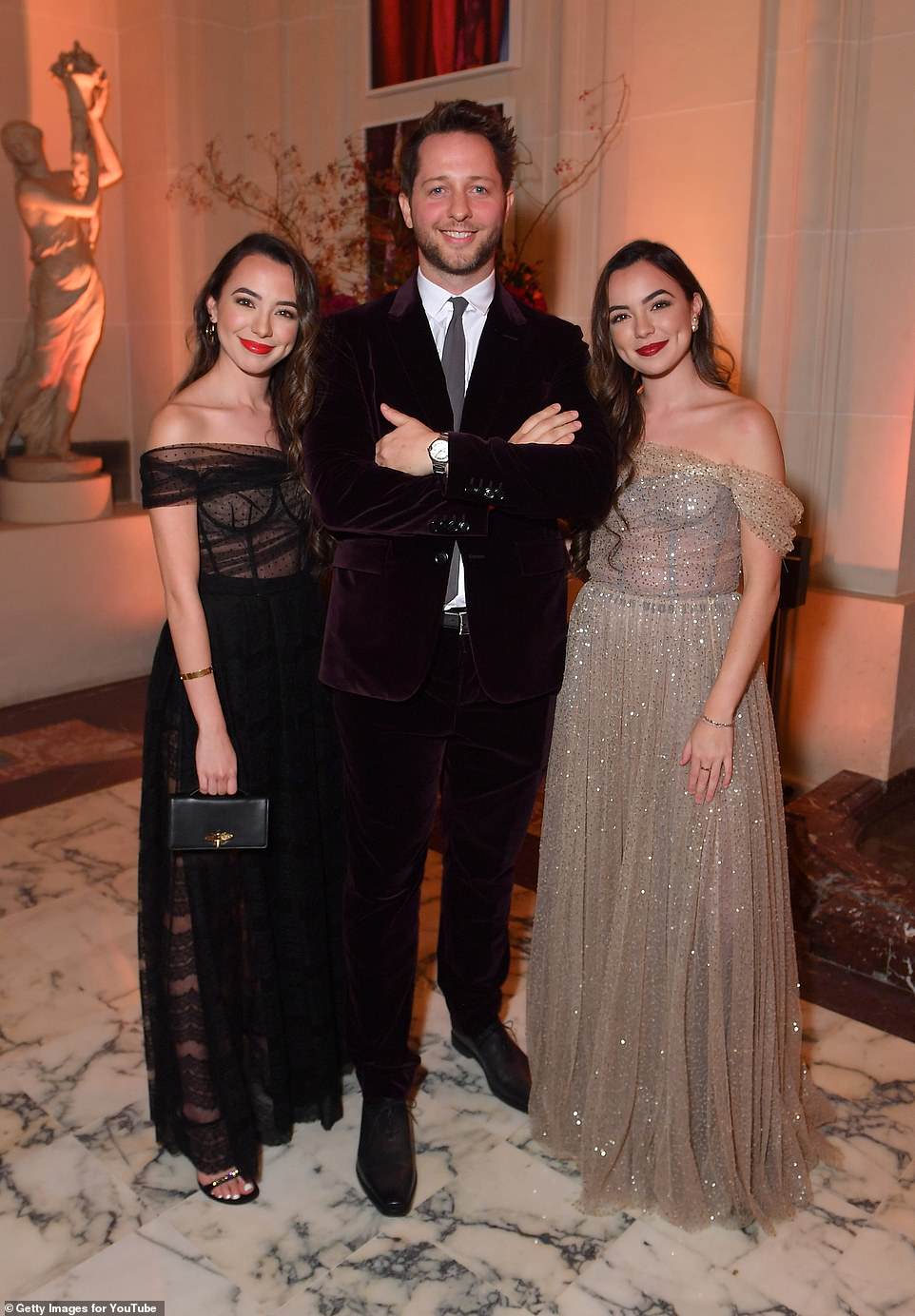 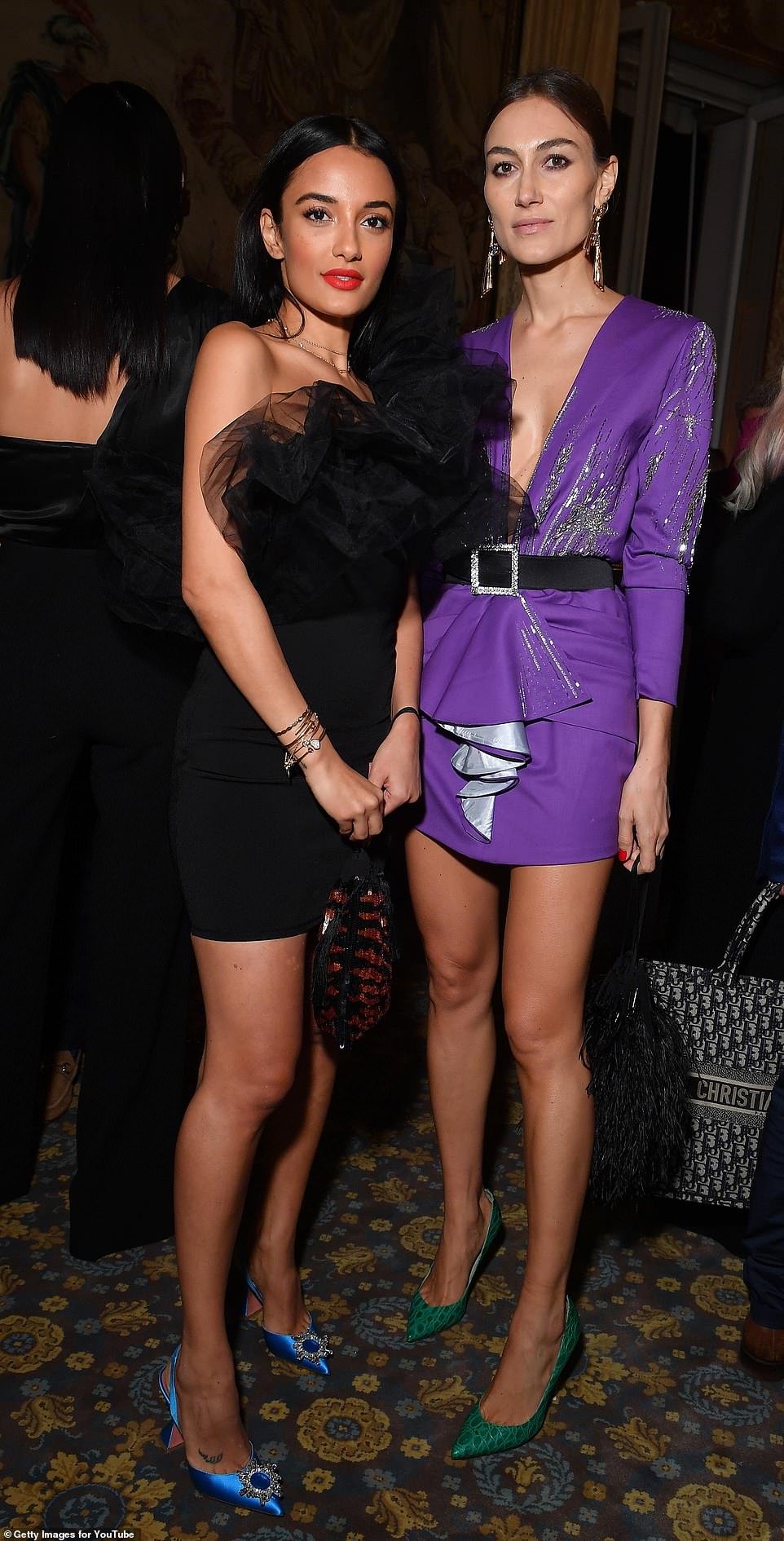 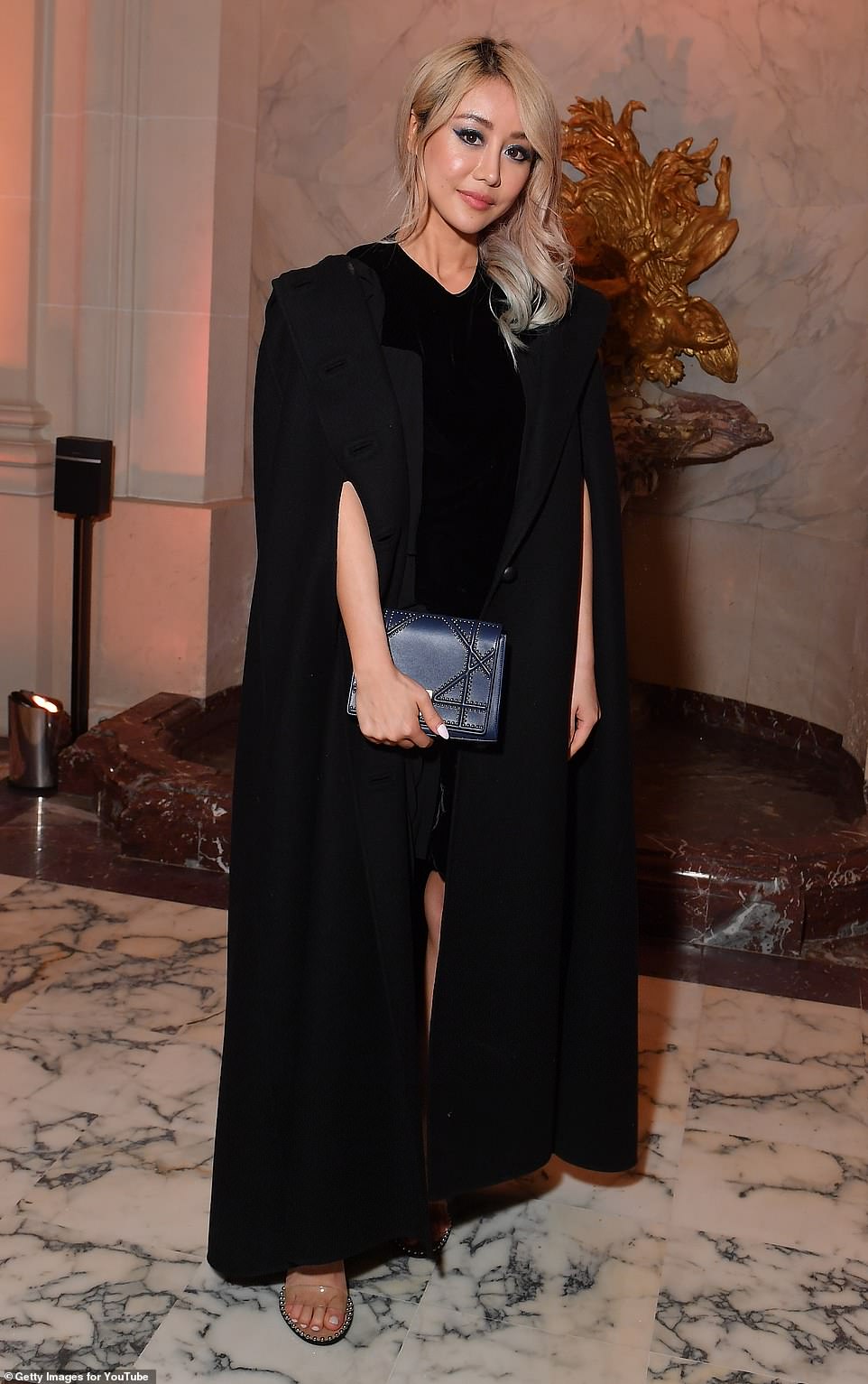 Happy days: Australian Youtuber Wengie went for a dramatic ensemble with a cape and sweeping hemline