The image was one of calculated simplicity: plain white T-shirt, ripped jeans and wellies. Compared with her usual high-fashion looks, Victoria Beckham was decidedly dressed down during a visit to Kenya this week.

For Nairobi teenager Emily Juma, it was a dream come true to meet her famous idol, though she was surprised by how ‘simple’ Victoria’s outfit looked.

What she did not know — and Victoria’s nine-strong entourage was in no hurry to reveal — was that it would cost a local worker like Emily’s mother a year’s wages to pay for that ‘simple’ ensemble: total cost £490, thanks to a £90 T-shirt from her eponymous label, £280 jeans and wellies that cost £120. 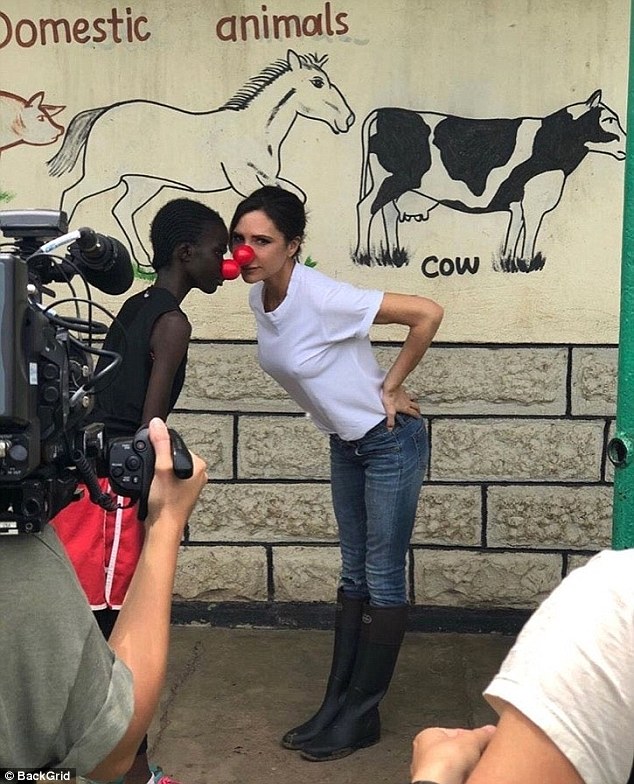 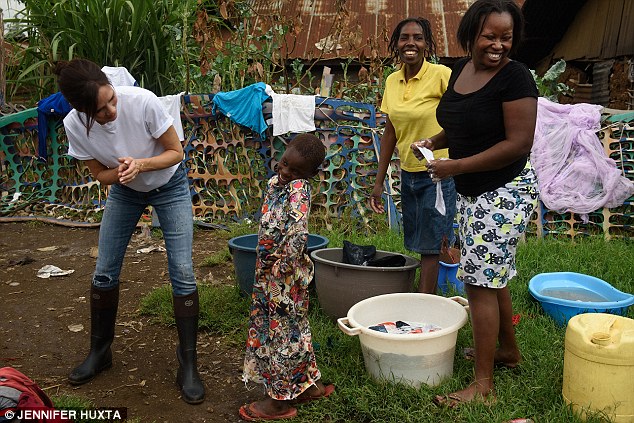 For Sport Relief and America’s version of Red Nose Day, it provided valuable publicity, as shared with Victoria’s 19.3 million followers on Instagram

For Emily, 19, lives in Korogocho, one of the Kenyan capital’s most impoverished slums, where Victoria was on a whistle-stop tour to promote two charities close to her heart.

For Sport Relief and America’s version of Red Nose Day, it provided valuable publicity, as shared with Victoria’s 19.3 million followers on Instagram.

To the residents of Korogocho — all 200,000 of them, crammed into ramshackle huts on a plot smaller than a square mile — Mrs Beckham’s visit was a once-in-a-lifetime encounter with a gilded life they will never know.

In Korogocho, one toilet is shared between 100 people. Back home in their £31.5 million West London mansion, Victoria, David and their three youngest children have an en-suite bathroom each (yes, they really do have his-and-hers powder rooms off the master bedroom), with two more to spare for their guests and staff.

If that feels too cramped, Victoria can always decamp to her sprawling Los Angeles base (with six bedrooms and nine bathrooms). 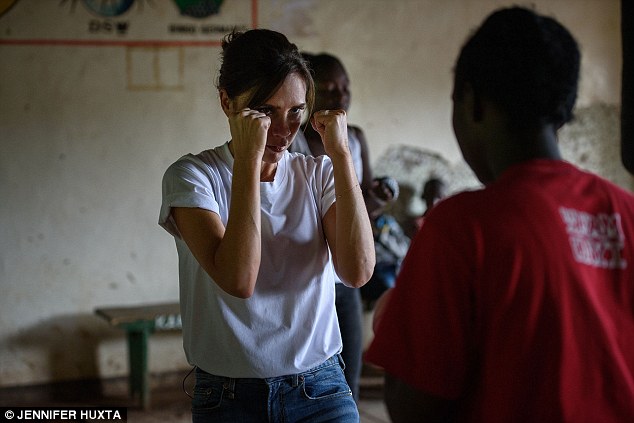 To the residents of Korogocho — all 200,000 of them, crammed into ramshackle huts on a plot smaller than a square mile — Mrs Beckham’s visit was a once-in-a-lifetime encounter with a gilded life they will never know

The move comes after an appeal fronted by Ed Sheeran in Liberia last year was accused of reinforcing ‘white saviour’ stereotypes. Miss Warner said on-location appeals would only be introduced and concluded by celebrities from now on.

It comes after the Labour MP David Lammy wrote in The Guardian that Comic Relief had ‘tattooed images of poverty in the African continent’ and ‘retains a narrow perspective that fails to convey the bigger picture of progress in the continent’.

Mrs Beckham visited the Kenyan slum with her team on Sunday to meet some of the youngsters who have benefited from BoxGirls, a female empowerment charity supported by Sport Relief.

The charity organises self-defence training for more than 800 girls from disadvantaged backgrounds, building their confidence and inspiring them to seek a better future. Venturing into Korogocho was a risk in itself. Foreign visitors are advised to stay away unless accompanied by security guards and even Kenyans from outside the slum tend not to venture in. 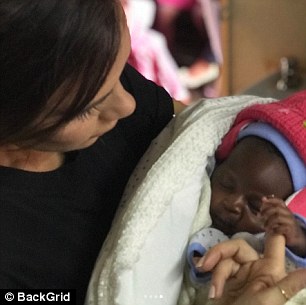 Mrs Beckham visited the Kenyan slum with her team on Sunday to meet some of the youngsters who have benefited from BoxGirls, a female empowerment charity supported by Sport Relief

Just three days after Victoria’s visit, two thugs were shot dead by police in separate incidents after they robbed passers-by.

Perhaps that goes some way towards explaining why Mrs Beckham was there for only 30 minutes. But that was long enough to inspire Emily, who has idolised the former Spice Girl since seeing her on television as a little girl.

‘Victoria wanted to find out how the girls in this slum live and she interacted with us,’ said a beaming Emily.

‘She was very friendly and took photos with some of the girls and ladies. She didn’t stay for long because she also had to attend another session.

‘To us, it was such a pleasure to meet her. We had time to express ourselves and ask her questions. But she didn’t talk much because what brought her here was the charity, so she was questioning the girls about sport and how it has helped them.’

Travelling all that way for just a 30-minute visit may seem peculiar and Victoria certainly received her share of criticism online.

It did not help that, the following day, she posted a series of pictures of herself — taken by a professional photographer — from the comfort of a five-star hotel.

Victoria and her entourage were put up in style at the Fairmont The Norfolk Hotel in the Kenyan capital Nairobi.

As the star of the show, she stayed in a £500-a-night suite, checking in under the pseudonym ‘Caroline’ — her middle name. With its heated outdoor pool, health club, spa and upmarket restaurant serving lobster and Chateaubriand, it could be a thousand miles away from the slums.

The reaction on social media was excoriating, with widespread accusations that she was engaging in ‘poverty tourism’. One angry fan wrote: ‘You had time to put on full make-up in Kenya? And your white T-shirt has no stains and dirt? Those poor Kenyans are being used as photo props.’ Another commented: ‘A photo-shoot in the middle of poverty, why not?’

Many called for her to show more diverse pictures of Kenya and fewer of her own modelling.

One said: ‘I think Victoria Beckham will get more out of this than the poor community in Kenya will get in return.’

Perhaps the most damning comment was: ‘Here is a pic of a privileged white woman making herself feel better about herself by “working” with poor folks.’

Yet it is interesting to note that the overwhelming majority of this criticism came from mostly white and middle-class people in Britain and America. In Nairobi, the people were just delighted to see Mrs Beckham. To a man and woman, they spoke of her humility and genuine interest in finding out more about them.

Margaret Wanjiro, who was pictured washing clothes in another of Mrs Beckham’s Instagram posts, spoke of the former pop star’s warmth.

The 35-year-old said: ‘She was a very friendly person and greeted everyone by hand. She looked very smart and all the kids were crowding around her.’

Not surprisingly, none of the women Victoria met had any notion of how much the simple outfit she was wearing cost.

Emily Juma praised Victoria for dressing down. ‘I think most of the time when people come to realise they’re celebrities, they tend to dress at a higher class so people can notice them,’ she said.

‘But when she came in that manner, she looked so simple and allowed us to be open with her.’

A dash of glamour goes a long way in Korogocho, as Hassan Kaplingat, a Kenyan youth worker, knows all too well. ‘Korogocho is one of the most dangerous places in Nairobi,’ he told me.

‘There are lots of robberies and car hijackings. You’ll notice that there are no banks here.

‘Many Al-Shabaab [an extremist jihadi group] recruits come from Korogocho. The terrorists spot places where people are very idle and poor. They pay families to take their sons. If you refuse to join them, often they will come back for your family. They even recruit Christians, it’s not just Muslims.’

Once her half-hour was up, Victoria left and headed for Kariobangi, a slum in Nairobi’s notorious Eastlands area, where she tried her hand at some boxing training alongside girls supported by the charity. 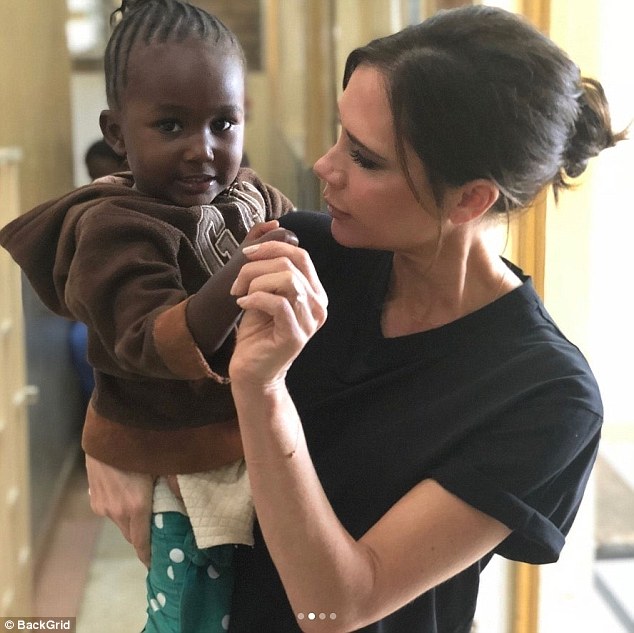 The workers at the clinic were impressed by Mrs Beckham’s ‘simplicity’, saying she had no airs and graces’

‘I’ll blame the jeans for the fact that I’m not that good,’ she wrote alongside an Instagram post.

Given her full face of make-up and immaculate hair, one can only assume that it was a less than strenuous workout.

Sarah Ndisi, who works for BoxGirls, set up an open discussion for Victoria with different girls from the Korogocho area.

While she met some of the girls’ families, it was clear that her focus was on the young ladies whose lives have been transformed by the charity. That was the message sent out on Instagram, where Victoria posted a video of herself talking to the girls.

‘So I’m just here hanging out with the girls, talking about boxing and everything that they get out of boxing — how they find it empowering, how it’s good for their fitness, their mind, and how much they’ve changed since Sarah [Ndisi] has been working with them,’ she said.

To echo Mrs Beckham’s mid-Atlantic vocabulary, no doubt it was ‘super nice’ to return to her hotel suite that evening. At 800 sq ft, it is just a shade smaller than the average British house.

However, it won’t surprise anyone to learn that she didn’t go wild in the restaurant.

For two nights running, she ordered a simple avocado and tuna salad (a snip at 1,800 Kenyan Shillings, or £12.50), turning down alcohol and settling for a glass of water instead. ‘She was very polite,’ said one of the chefs in Tatu, the hotel’s fine dining restaurant. ‘The rest of her group ordered different dishes and alcohol.’

Invigorated by a good night’s sleep in her king-size bed, Victoria headed out the next day to visit the Amref clinic in Kibera, another of Nairobi’s dangerous slums.

Red Nose Day USA supports the clinic’s immunisation project for children under the age of two who live in Kibera, which is the largest slum in Africa with 250,000 people living cheek-by-jowl.

For that visit, Victoria chose another T-shirt from her own collection, this time in black.

The workers at the clinic were impressed by Mrs Beckham’s ‘simplicity’, saying she had no airs and graces.

‘You couldn’t tell she was a celebrity,’ said a manager. ‘We are used to so many visitors and she was just introduced as Victoria, so I didn’t realise who she was until she left.

‘A lot of people came with her, including security. As you can see, our clinic is in a slum. When they came, they were in a hurry, so she didn’t sign the visitors’ book. She stayed for about half-an-hour.

‘She spent most of her time with the babies in the maternity ward and with the children.

‘You can tell that she loves children. She also went to the immunisation ward.’

Despite the flying visit, her attachment to the tiny patients was in evidence on Victoria’s Instagram feed.

Making a reference to her famous husband David, 42, she posed for the camera cradling a baby in her arms. ‘This is baby David — Victoria and David,’ she coos into the camera. ‘Look at his little hand. So peaceful.’

Later, from the safety of her car, Mrs Beckham posted a live video of her drive through Kibera, which was a hotspot for violence during Kenya’s general election last year.

Hassan Kaplingat, who grew up in the slum, is all too familiar with its risks.

‘Most of the guys here are between 15 and 25 years old and they hold guns and weapons,’ he told me.

‘It’s dangerous because they’re able to know when a person is new to the area. It’s not safe.

‘People here live on one dollar a day. It’s a hand-to-mouth existence. They live on a very low income.

‘Most people work in factories, making mattresses or slippers.’

As he spoke, Victoria and her entourage were cruising to Jomo Kenyatta airport in air-conditioned serenity, heading home to London.

Like the slum-dwellers of Nairobi, Victoria makes things to sell (though she, of course, never has to get her hands dirty herself).

Back at work, she posted a picture from her spring/summer fashion show, along with the caption: ‘The Patch Pocket Kilt is available now at victoriabeckham.com.’

The particular mid-length skirt in question retails for £1,190. Or, in Korogocho money, two-and-a-half years’ wages.