Outrage as Dan Andrews’ deputy makes wild claim the Opposition is supporting ‘NAZI’ candidates: ‘There is no excuse’

Victorian Premier Daniel Andrews and his deputy have come under heavy fire after they accused their Liberal rivals of preferencing ‘Nazis’ days out from the state election.

The final week of the election campaign turned nasty at the weekend as Labor tries to convince voters to give them a third consecutive term.

It comes as Premier Andrews and his deputy Jacinta Allan accused the opposition of preferencing Nazis and extremists on their group party ticket.

‘If there are Neo-Nazis running for this election, I want to know who they are,’ Dr Abramovich told reporters on Monday.

‘The public needs to know who they are. They are a threat to our way of life.’

On November 19, the premier said Nazis and bigots had no place in politics.

‘The Liberal Party are actively supporting candidates who espouse those views. I’m not going to name them – I’m not going to give them the satisfaction of airtime. But I am going to call it out. This is what’s at stake this election,’ he wrote.

I want to be very clear here.

Nazis, racists and bigots have no place in politics.

They have no place in our parliament.

And they have no place in our state.

The furore comes as Deputy Liberal Leader David Southwick slammed Mr Andrews and Labor for their use of the term Nazi to describe some candidates running for parliament.

Mr Southwick said it was ‘completely inappropriate and desperate’ of the government to use the term Nazi and if there were candidates running with those views, then they should be named.

‘To come out and use the term Nazi so loosely, is completely inappropriate. It’s desperate and it needs to stop,’ he told reporters on Monday.

Mr Southwick said the coalition did not want to see people with extremist views in parliament but the party had to preference Labor last in order to increase its chances of winning government.

‘We don’t have much choice in terms of who we’re preferencing … we’ve tried to put the government last because at the end of the day they’re our opposition,’ he said.

Anti Defamation Commission chair Dvir Abramovich called on the government to name the Nazi candidates and refrain from using Holocaust references during the election debate.

‘I have repeatedly spoken out against the marshalling of the Holocaust for political aims and have said that there is no excuse for public figures to play the Nazi card and to use this supercharged term as a blunt tool to score political points,’ he said in a statement.

‘When will our elected representatives understand that throwing such terms as “Nazis” is simply unacceptable and belittles the indescribable atrocities carried out on an industrial, monstrous scale in Nazi Germany and across Europe during WWII?

‘If there are candidates in this election that possess Hitler’s genocidal objectives, or are espousing antisemitic views, or are advocating the deliberate, industrialised liquidation of the Jewish community and other minorities they should be named and called out.’ 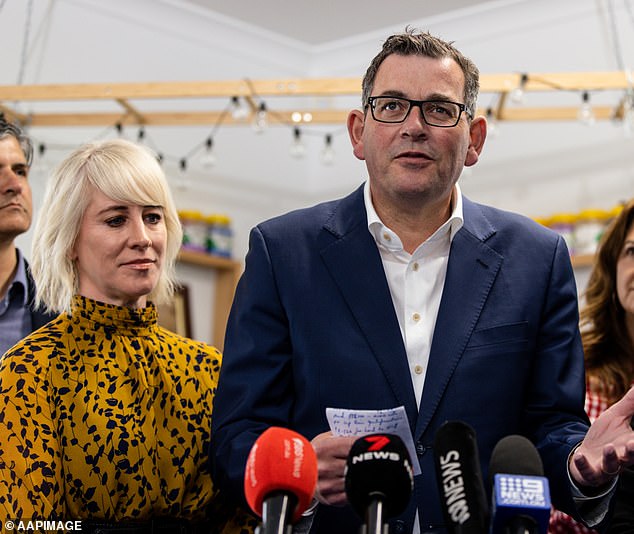 Mr Abramovich said he would stand ‘shoulder to shoulder’ with the government and opposition to make sure neo-Nazis and white supremacists are never elected to government.

‘But, more broadly, Holocaust comparisons are never valid, cheapen and drain this unparalleled event of its true horrors, and distort young people’s understanding of this inhuman period,’ he said.

‘The victims, survivors and the diggers who lost their lives to defeat this evil regime deserve better.

‘Employing Holocaust terms coarsens our political discourse that demands civility and I call on all politicians to refrain from employing such trivialisations in the future.

‘Our language is powerful enough to discuss policy differences and it is time to retire and bury, once and for all, the improper Nazi references.’