Victoria is expected to record more than 450 new coronavirus cases

Victoria is expected to record more than 450 new coronavirus cases as hundreds of anti-maskers vow to attend a rally this weekend.

The figure, which is yet to be confirmed, marks a dramatic decrease from the record 725 cases on Wednesday.

Two men have already been arrested in relation to the so-called ‘freedom rally’ which is planned to take place on the steps of Parliament on Sunday.

The protest would be in breach of the Chief Health Officer’s directions which bans gatherings of more than two people in public places.

The arrests of the men, both aged 41, came after police searched two homes in Mooroolbark and Chirnside Park on Thursday.

Harsher restrictions includes an 8pm until 5am curfew and a ban on leaving your home unless for essential reasons (pictured: The Bolte Bridge during the first night of curfew on Sunday) 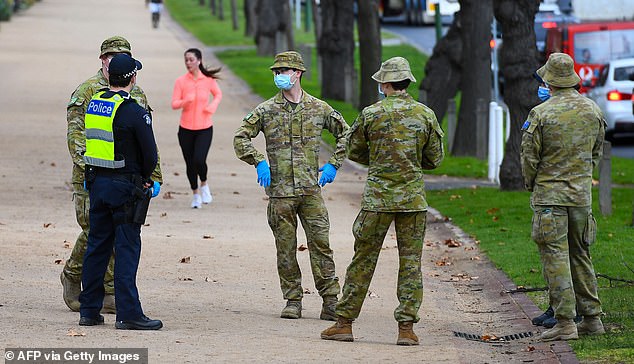 A 41-year-old male from Mooroolbark was charged with incitement. He was bailed and is due to appear at the Melbourne Magistrates Court in January next year.

A 41-year-old male from Chirnside Park was also arrested  but was released with intent to summons. He is expected to be charged on Friday with the same offences.

On Sunday, Melbourne was placed under a police enforceable curfew of 8pm until 5am until at least September 13 as part of a Stage 4 lockdown.

Melburnians can only leave their homes between these hours for work, care-giving, medical reasons or on compassionate grounds.