Victoria has recorded 394 new cases of COVID-19 on Sunday as the number of daily infections in the state continues to fall – but Premier Daniel Andrews has confirmed a record 17 deaths from the respiratory illness.

Mr Andrews said 174 of the cases were mystery cases with no known close contact who was already infected – describing them as the state’s ‘biggest challenge’.

‘They’re the ones that are incredibly challenging from a containment point of view, and that’s what’s made fundamentally necessary these really very challenging settings,’ he said.

The daily infection total dropped below 400 cases after 450 infections on Friday and 460 on Saturday, a dramatic decrease from the state’s record of 750 cases on Wednesday.

The rise to 7,854 active cases in Victoria comes as the state’s police force battles to enforce Melbourne’s unprecedented stage-four lockdown – having issued 268 fines for restriction breaches in the past 24 hours.

One case involved a man who said he was helping a friend move a television from Doncaster East to Dandenong in Melbourne’s east and was planning to stop for a burger at a fast food outlet.

Another was a man found with four male friends who were visiting him in his Mount Alexander bungalow.

Police said the reason he gave for breaching the rules on home gathering – which ban all visits in Melbourne unless they are to deliver care or urgent and essential services – was they wanted to ‘watch the footy’.

Only two people turned up to a ‘freedom rally’ to protest the lockdown in Melbourne, despite up to 400 people being expected to kick off the illegal protest on the steps of Parliament on Sunday.

Footage shows a masked protester yelling for residents to stand together against mandatory vaccinations.

A man is detained after refusing to move on during an anti-lockdown protest in Melbourne on Sunday. Victoria Police have told people planning to attend a Melbourne protest at the state’s parliament building it was a breach of COVID-19 restrictions

Earlier on Sunday, Queensland Premier Annastacia Palaszczuk revealed her state had recorded no new cases of the virus.

University of Queensland virologist Professor Ian Mackay had warned this weekend was vital for the Sunshine State in suppressing the spread of COVID-19.

‘It is a critical weekend it is possible people may have been incubating illnesses during the week and thought I will hold off to get tested until the weekend,’ he said.

‘We need to put as much time behind us as we can to be absolutely sure that there are not little clusters out there that have been percolating or incubating and about to flare up.’

One was from a returned international traveller, seven were close contacts of known cases and two were ‘mystery cases’ with no link made yet to known infections.

An infected healthcare worker was infectious on shift at Hornsby Hospital’s emergency department on Sydney’s upper-north shore, while another was a student at the Tangara School for Girls in the city’s north-west 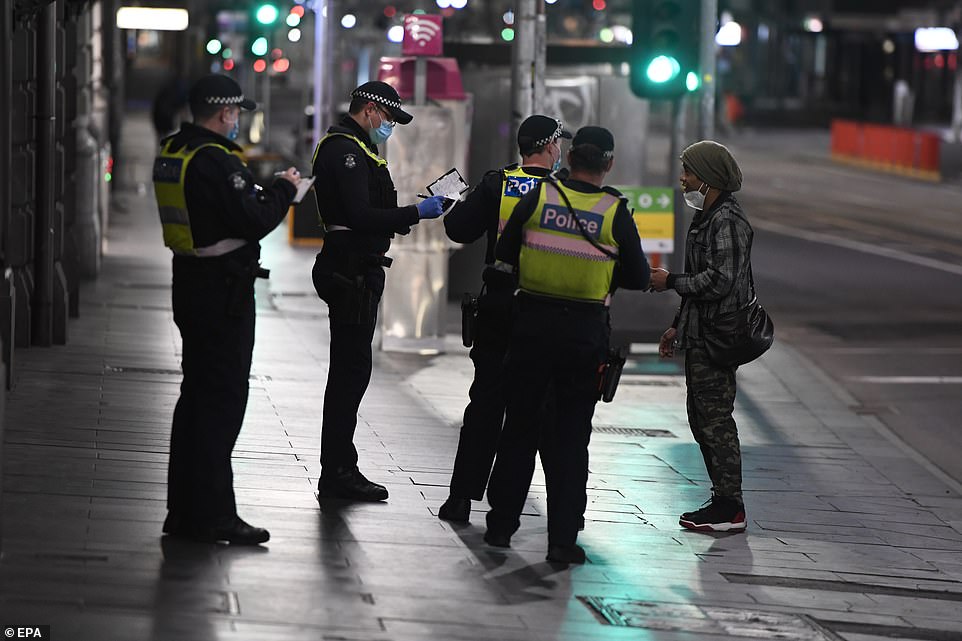 ‘Given what’s been happening in Victoria and where the country is at, we support the current state border arrangements, including here in Western Australia,’ he told ABC’s Insiders.

On Saturday Mr Andrews announced 466 new cases as the state’s COVID-19 death toll climbed to 193, with the national tally rising to 278.

Mr Andrews warned Victoria is not likely to see a steep decline in coronavirus infections for ‘a little while’ amid strict stage four lockdown.

Chief Health Officer Brett Sutton said the state was seeing a ‘stabilisation’ of cases with daily number around the 400 and 500 mark each day.

‘That is not good enough but it’s a positive that we have averted an exponential increase through the last couple of weeks,’ he said.

‘But we can’t have 500 cases every single day and the associated morbidity, hospitalisation, intensive care requirements and debts associated with that number every day,’ he said.

‘Stage four restrictions will make a difference but we won’t see them for another week or more.’

The tough stay-at-home restrictions, which include an 8pm-5am curfew for metropolitan Melbourne, have been in place for almost a week.

There are also fears Victorians could be left without medicine, alcohol and school supplies after major businesses were closed by the state’s stage four lockdown.

Australia Post was told it could keep open 200 outlets facing closure but the business is struggling to operate with just two thirds of its staff. 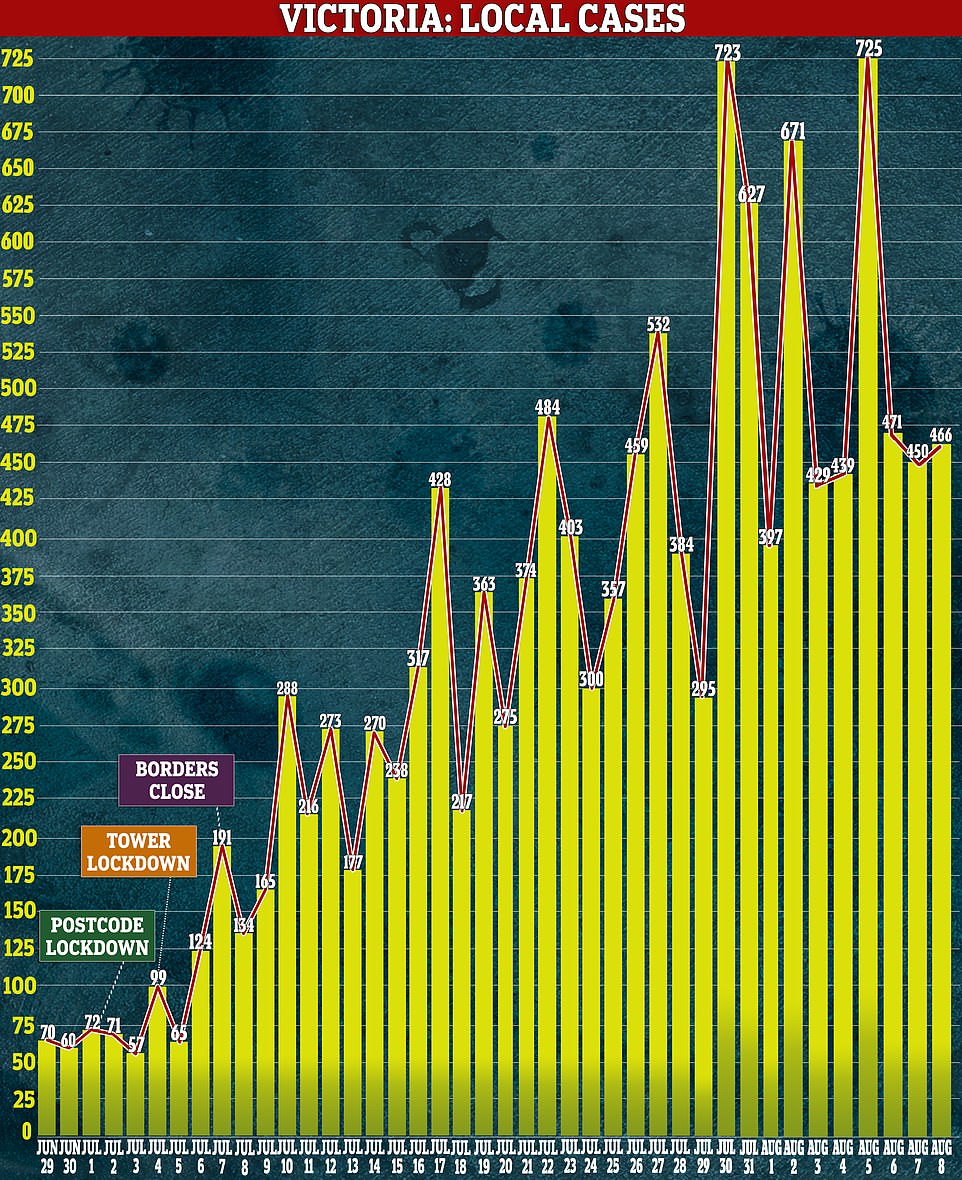 * 466 new cases, the 34rd consecutive day of a triple-digit increase

* Six of the latest deaths are linked to aged care

* 197 in the 24 hours to Saturday morning, including 39 for failing to wear a face mask and 62 for curfew breaches. 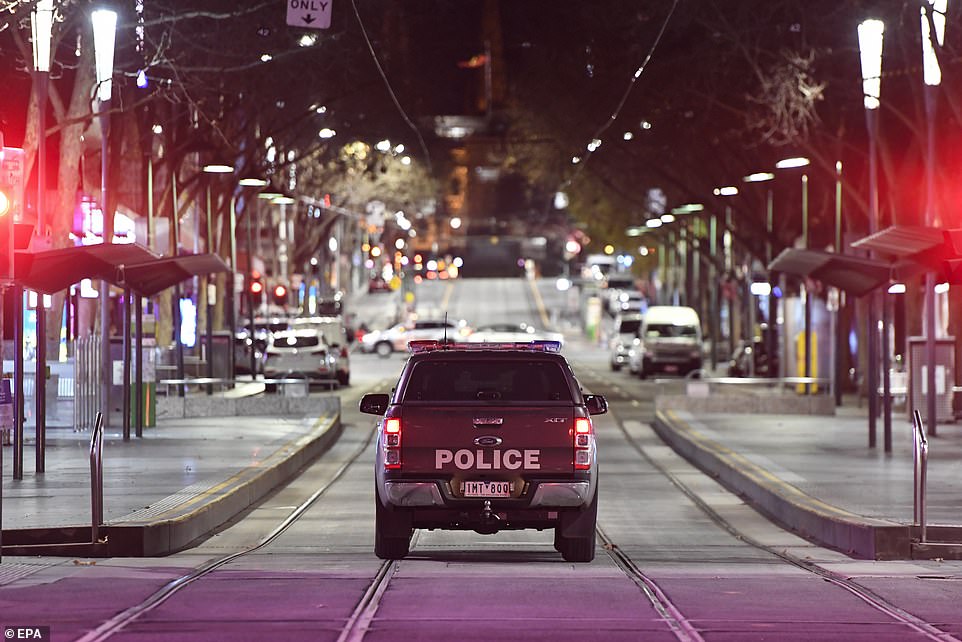 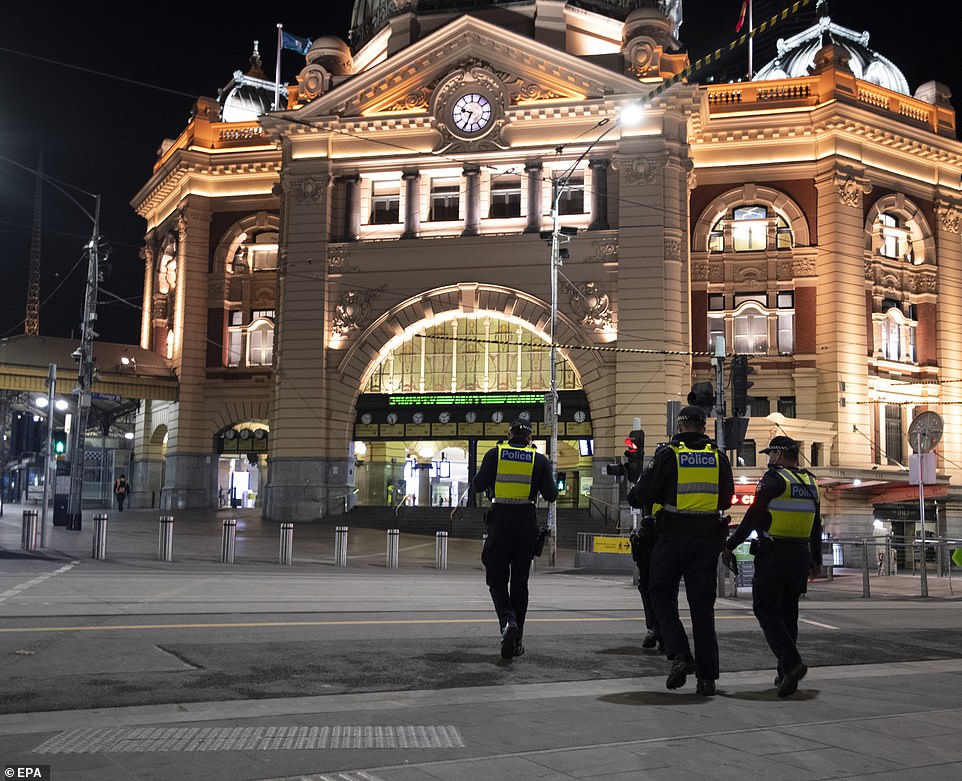 Signage for stage four lockdown restrictions, implemented to curb the spread of the coronavirus disease, is seen in Melbourne

Chief executive Christine Holgate said there could be long delays as demand for deliveries soars amid Melbourne’s strict Stage 4 lockdown.

She said that demand in coronavirus-stricken suburbs was already up 200 per cent and orders from Chemist Warehouse, Dan Murphy’s and Office Works were under pressure.

Ms Holgate said Australia Post was responsible for deliveries for 200,000 online businesses and had a team of 21,000 people in Victoria.

‘All the major medical distribution centres are based in Victoria. API, Sigma – they supply pharmacies right across the country,’ Ms Holgate told the Australian Financial Review. 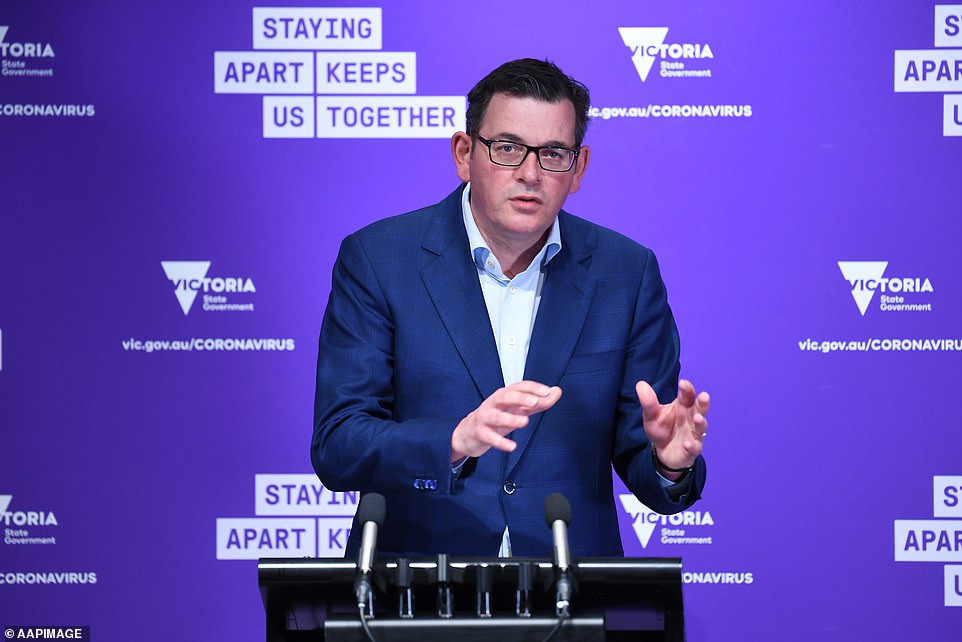 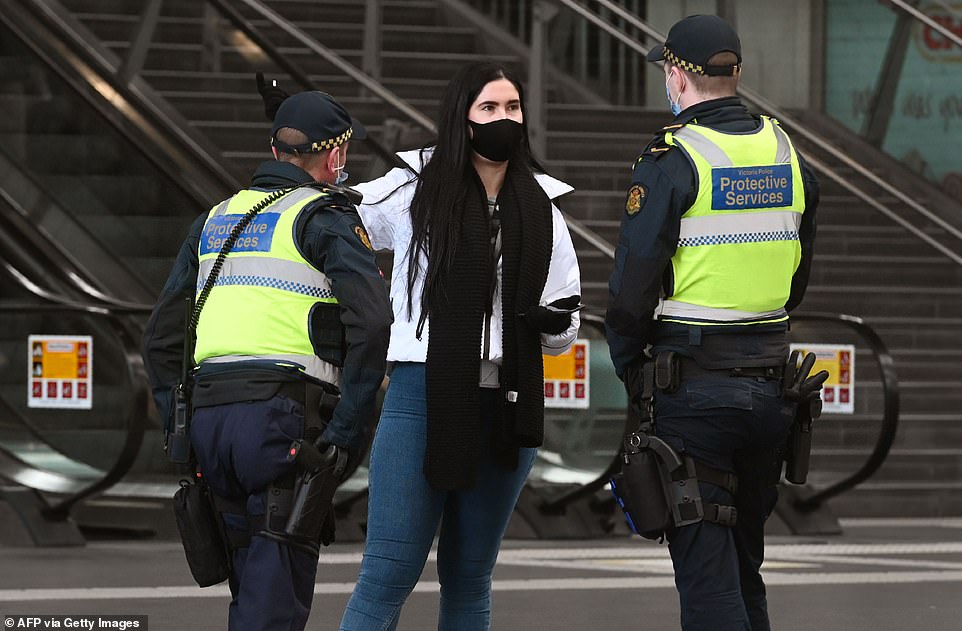 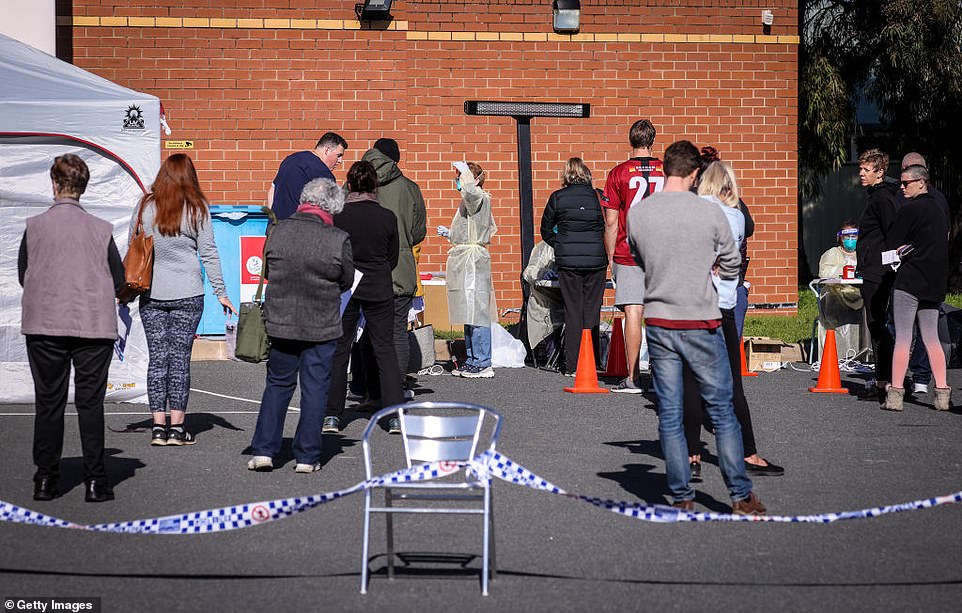 Of those cases, two were international travellers in hotel quarantine, four were locally acquired and three have no known source.

There are fears NSW is preparing for a second outbreak of infections with nine cases identified over the past week not linked to known clusters.