Victorians will finally be allowed to go on holiday and host house parties with the famously locked down state relaxing its restrictions.

Premier Daniel Andrews said home gatherings of 20 people would be allowed from June 1, as well as overnight stays at tourist accommodation.

The 20-person limit is on the number of people in the house at one time, including those who live there, so a family of five could have 15 guests.

Camping grounds and caravan parks will also open alongside hotels, but the use of communal bathrooms and kitchens is still banned.

Premier Daniel Andrews said home gatherings of 20 people would be allowed from June 1, as well as overnight stays at tourist accommodation

These will have a limit of 20 people, the same as cafes, restaurants, and pubs which last week were told they could reopen on June 1.

Victoria is the last state in the country to allow dining in, with beer already flowing and tables full everywhere else.

Mr Andrews has enforced notoriously strict rules all through the pandemic, being the first to close schools and bring in crushing restrictions – and last to revoke them.

Victorians were initially not even allowed to visit partners who didn’t live with them, until state health officials and public outcry reversed it. 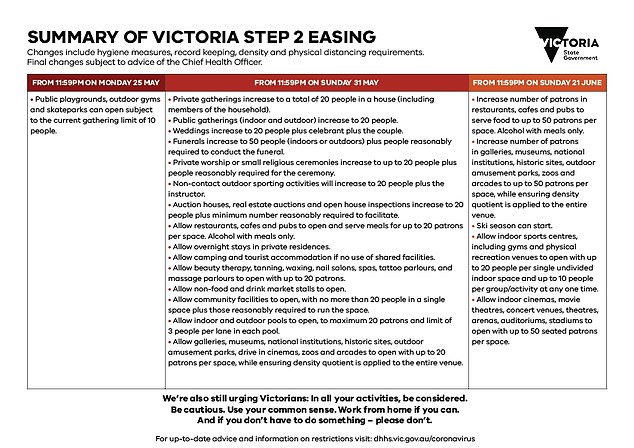 Businesses will have to adhere to strict social distancing rules which include a staying 1.5m apart and having four square metres of space per person.

Community sport can also resume, but with a raft of restrictions that make most sports impossible or pointless to play.

The sport has to be played outdoors,  and be non-competition, non-contact, and be able to be played with everyone 1.5 metres apart.

Weddings will be allowed to have 20 guests, plus the celebrant and couple, and up to 50 people allowed at a funeral in addition to the staff conducting it. 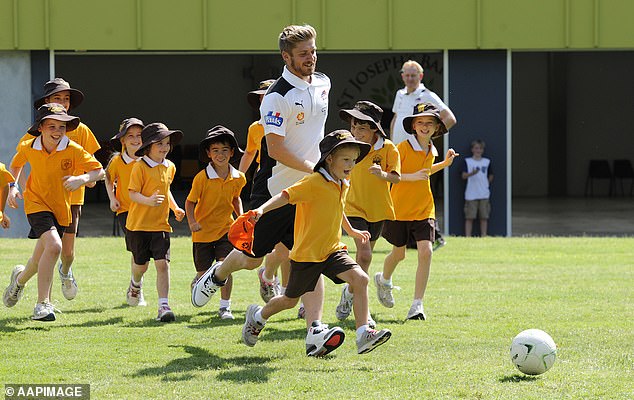 Community sport can also resume, but with a raft of restrictions that make most sports impossible or pointless to play

Up to 20 will be allowed at religious ceremonies, in addition to those required to perform the service.

‘We just can’t afford to have millions of people moving around our state – taking public transport or using the communal kitchen,’ he said.

‘Let alone when you think about the logistical challenges of getting people in and out of lifts or lobbies.’

Gyms will be allowed to open for 20 people at a time, with group exercise classes limited to 10, and cinemas and theatres open for 50 customers.

Limits on restaurants, cafes, pubs, galleries, and museums will be raised to 50 on that date as well, and ski fields will finally open.

Victoria detected nine new cases on Saturday and 16 on Friday – by far the highest in the country on those days.