Victorian Covid cases fall from record high to 1,420 with 11 deaths

Victorian Covid cases fall from record high to 1,420 with 11 deaths as hundreds of Year 12 students are throw into isolation after infected classmates sat exams

Victoria has recorded 1,420 new Covid cases and 11 deaths as hundreds of Year 12 students at two Melbourne schools were forced to self-isolate after sitting their exams with Covid-infected classmates.

The figures come after the state posted a record-high 1,763 cases on Tuesday – by far the most new Covid-19 infections in a single day in Australia since the start of the pandemic.

Both schools have sent letters to parents asking anyone who attended the on-site assessments to stay at home and ‘limit their movements’ until told otherwise.

Victoria has recorded 1,420 new Covid-19 cases and 11 deaths on Wednesday. Pictured are police patrolling Melbourne this week amid the state’s Delta outbreak

The two schools will also be closed until further notice to limit the spread of the virus.

Students sitting the GAT in 22 Covid-hit postcodes in Victoria were strongly advised to get tested for the virus before undertaking their exams this week. 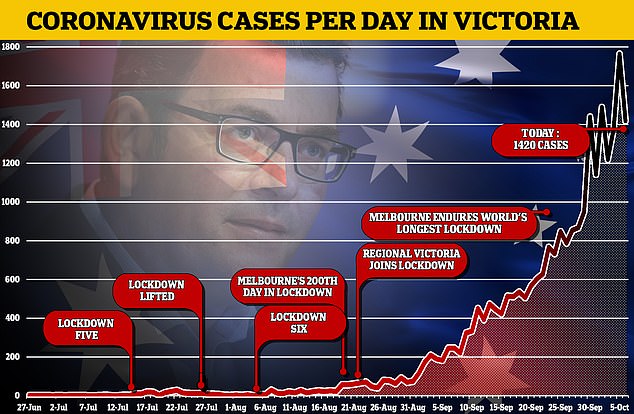 Wednesday’s figures come after the state posted a record-high 1,763 cases on Tuesday – by the most new Covid-19 infections in a single day in Australia since the start of the pandemic

As many as 100,000 Victorians are now cooped up in self-isolation as the state’s Delta outbreak continues to surge.

Supermarkets, GP clinics and public transport services are all facing mass staff shortages amid urgent calls for health authorities to cut the length of time close contacts must spend in isolation.

More than 350 workers at Australia Post have been forced into isolation after coming into contact with a known case.

Deakin University chair of epidemiology Catherine Bennett said the risk involved in shortening the quarantine period from 14 days was low.

‘Victoria has always erred on the side of caution, measures have always been based on risk, but this is now about acceptable risk,’ she said.

She claimed it would encourage residents to get tested for the virus if the mandatory quarantine period was shorter.

‘The whole idea is we move past uncertainty, and part of that uncertainty … is going down to the supermarket and ending up in isolation,’ she said.