Dash cam footage has captured the shocking moment a reckless bike rider diced with death by riding through a red light and into traffic at a busy intersection in regional Victoria.

Filmed in Bendigo on March 20 in the afternoon peak hour, the rider, who was wearing earphones, disregards a red light before colliding with oncoming traffic.

It’s understood the rider was not seriously injured, despite not wearing a helmet. 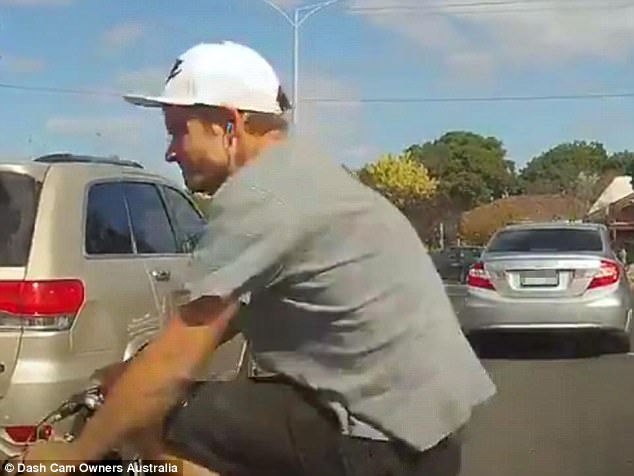 Another motorist got a close up photo of the rider, who wasn’t wearing a helmet and was wearing earphones

The terrifying footage was posted on Dash Cam Owners Australia’s Facebook page on Monday, where the video has been viewed more than 121,000 times and shared 153 times.

‘Obviously this guy was not right in the head, he rode straight into traffic and was collected by a car two lanes over from me,’ Samuel, who posted the footage, said.

‘He was up on his feet immediately and as there were plenty of people there to help, I drove on. Just because you can buy a bike for $20 on Gumtree does not mean you represent a whole community of people (cyclists). Imagine the damage this guy would have done behind the wheel of a car!’ 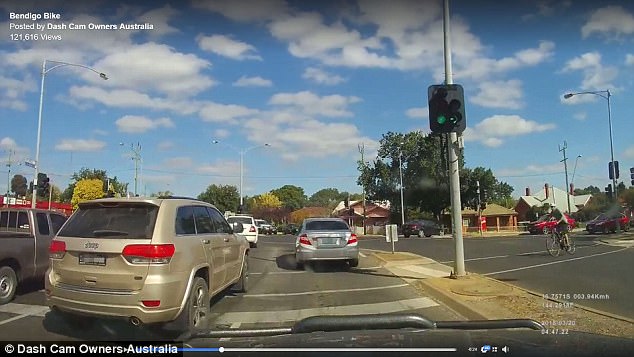 The Facebook post sparked more than 500 comments with the overwhelming majority slamming the cyclist for his stupidity.

‘Feel sorry for the guy that hit him. No sympathy for the moron on the bike though,’ one man posted.

Another added: ‘The cyclist must have left something at home before riding; his brain. Or maybe he doesn’t have one to begin with.’ 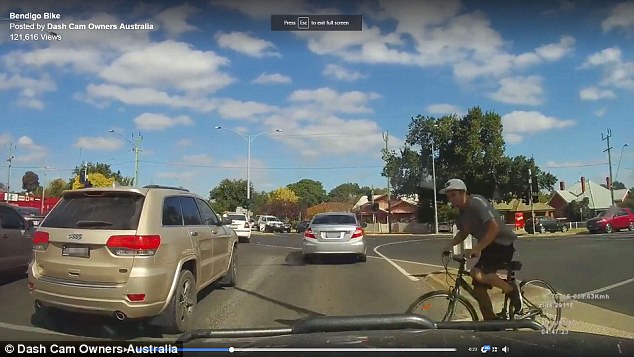 Others called for the need for cyclists to register their vehicles, like other motorists.

‘Lets collect all these stupid cyclists videos then send them all to the governments demanding cyclists be registered so when they cause crashes they are countable and they pay for the damage they cause,’ one man posted.

Another added: ‘Seems typical of most of the push bike riders out there. This is why they need a licence, registration and a number plate.’ 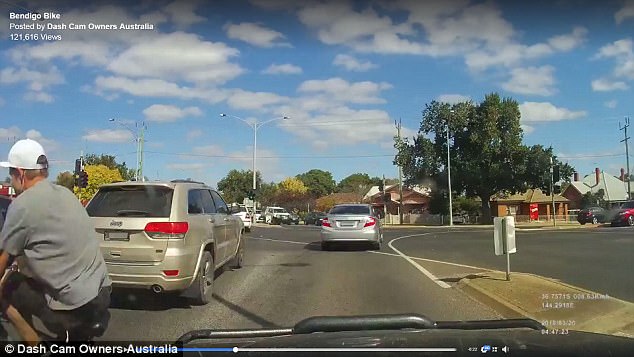 ‘Imagine the damage this guy would have done behind the wheel of a car!’ the motorist who captured the footage posted

More than 300 cyclists are seriously injured or killed in Victoria each year, according to Vic Roads.

Head injuries are a major cause of death and serious injury to cyclists, while 85 per cent of injured cyclists are over the age of16.

All bike and scooter riders are required to wear a bike helmet in Victoria.

Mandatory bicycle helmet laws were introduced in 1990, which apply when riding on roads, bike and shared paths, in bike lanes, in recreational parks and car parks.

‘Police can stop bike and scooter riders and issue a fine or a warning for not wearing an approved bicycle helmet,’ the Vic Roads website states.

It is not illegal to wear earphones while riding a bike.