Buyers have the once-in-a-lifetime chance to own a 218ft high Victorian folly as the owner who bought the tower in 1973 looks to sell it on.

Sway Tower in Hampshire is 14 storey tower house which is believed to be the tallest unreinforced concrete structure in the world. It was built in 1879 and offers incredible views across the New Forest countryside and the south coast, and even to the Isle of Wight.

The structure, in the village of Sway, has been in the family of businessman and entrepreneur Paul Atlas, 73, for the past 47 years, but he is now looking to sell it for £2.5 million.

‘Nobody has ever sold a house like this before and no one probably ever will,’ Mr Atlast told The Times. ‘I am 74 this year so I thought maybe we should have a change before we die. If people come up with the right offer we would sell it.’ 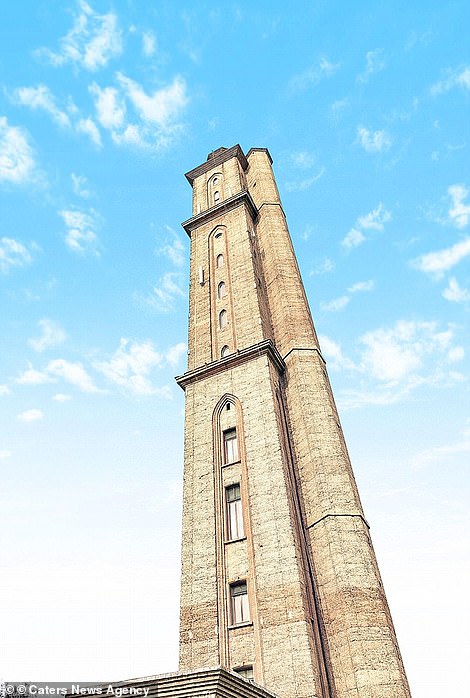 The 14 storey tower house (pictured) is believed to be the world’s tallest unreinforced concrete structure. The tower reaches 220ft into the sky and was built in the 1880s by Yorkshire barrister Thomas Turton Peterson 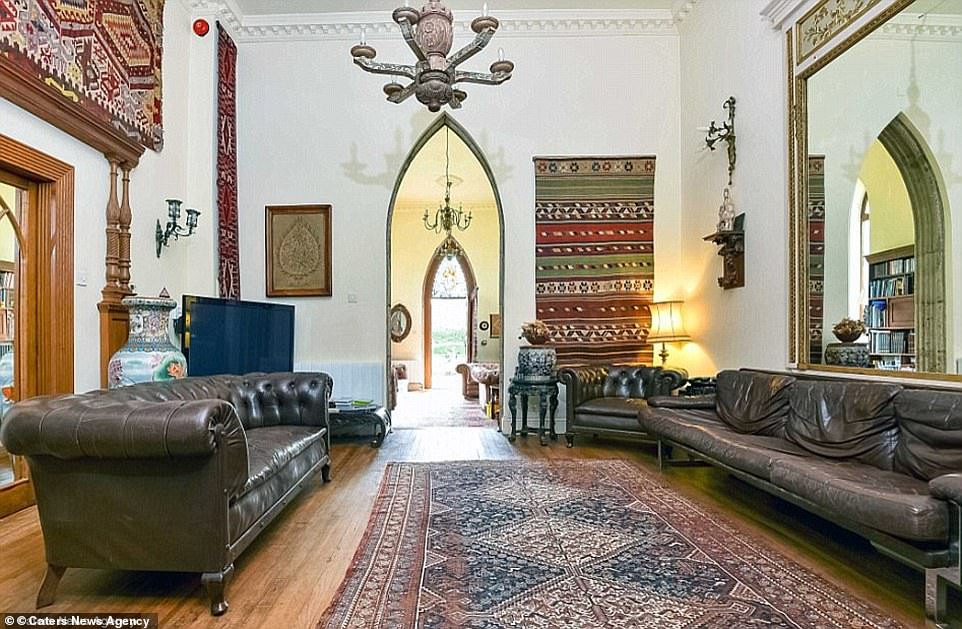 One of the sitting rooms in the 218ft structure with high ceilings and ornate furnishings. In order to get furniture up to the upper levels, windows on the east side of the tower can be removed to winch any beds or sofas up 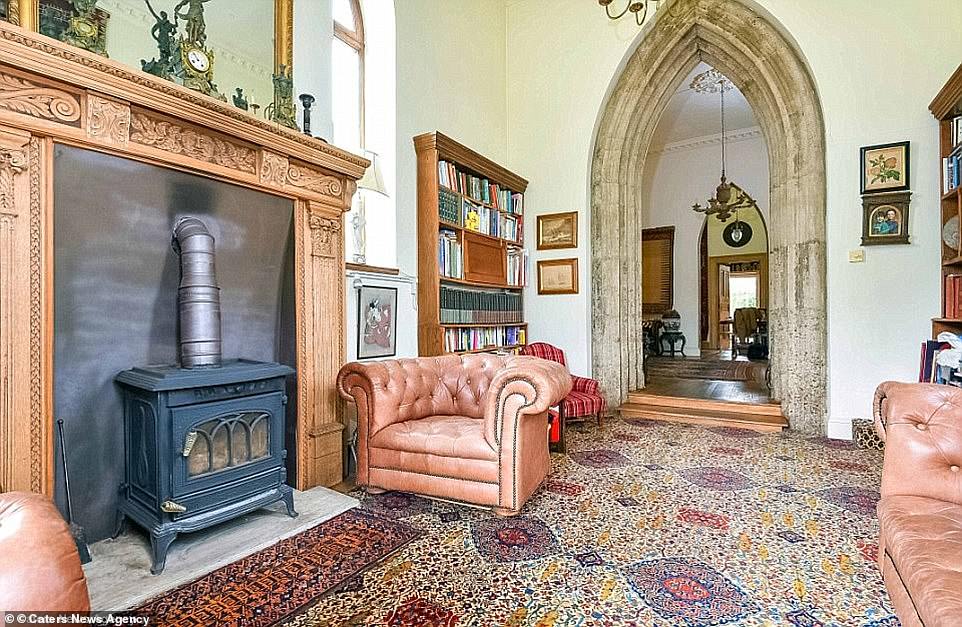 Another room to relax in the £2.5 million house that was built in 1879, showing a fire place and huge concrete doorway. The 14-storey high property, which boasts four bedrooms, three en suite bathrooms, an indoor swimming pool and a tennis court, is regarded as the county’s finest folly and has views across to the Isle of Wight. Pictured: One of the living rooms in the unique property

The property, which the owner has previously had valued at £3million, also comes with a 60ft swimming pool and a telecommunications income of £35,000 a year because its used by the emergency services and two mobile phone providers.

When Mr Atlas put the tower up for sale in 2018, he said that if a buyer could not be found within 45 days, he would begin the process of offering the tower as a prize with competition property experts WinThis.life, for just £10 a ticket.

However, this not not pan out for them, and he still owns the property and after it going on and off the market for the last few years, he is making another push to find a buyer after saying he has been ‘messed about with’ by people giving him advice on how best to sell it.

Grandfather-of-four Paul has lived in the 14-floor tower since 1995 with his wife Julie raising their two children.

Since they bought it in 1973 for £2,600 as young property developers, the Atlas’s have been busy renovating the structure ensuring that what stands now will last for generations to come.

In the mid-90s, with the backing of the local authority and heritage charities, Paul and a team of tradesmen renovated the structure after the storm of 1987 hit the south coast.

Over the years the Atlas family has used the tower for a variety of uses, It was once an elaborate ‘shed’ when it was first purchased, then a restaurant, a loss-making hotel and now finally a one-of-a-kind multi-million-pound home. The Atlas’s made it their permanent home in 1995.

Speaking to The Times, Paul said: ‘Not many people live with 14ft gothic arches. It also has its own crypt so you can stay forever. I am doing some work on the crypt at the moment, it’s quite a nice crypt, but I am not looking to be buried there.’ 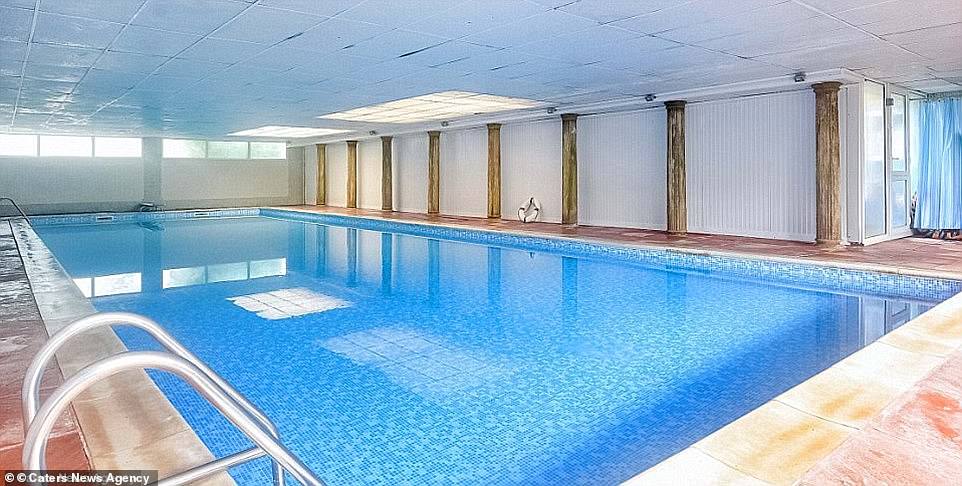 There is a large enclosed heated swimming pool within the tower, a tennis court and an extensive range of garaging with a home office 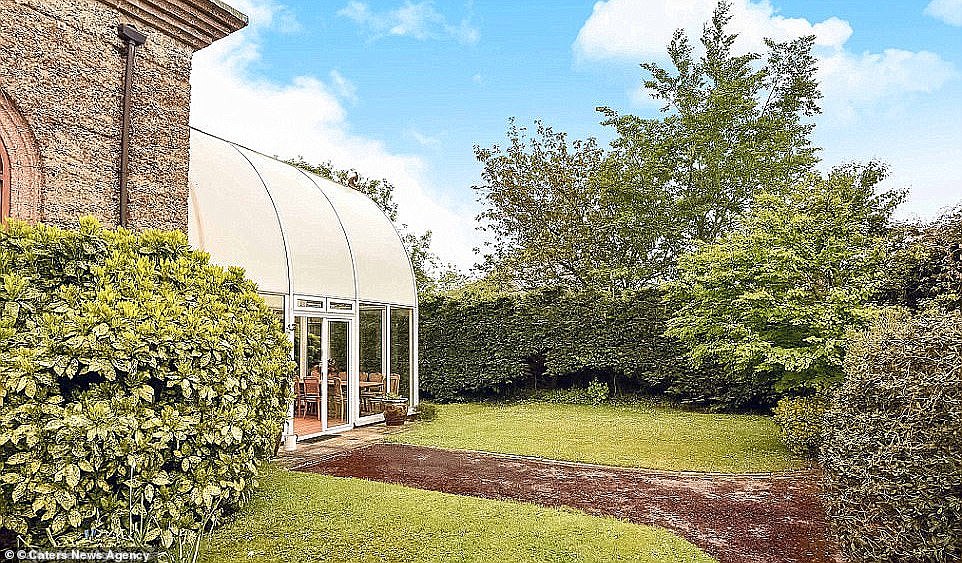 A view from the garden, which also has its own walled garden, of the conservatory

Paul said the tower is anything but an ordinary home and nowadays he restricts climbing the 330 steps to the top to once a month.

‘Each of the four bedrooms on four floors has a dressing room and is en-suite from that time, and there’s no reason someone couldn’t add more rooms if they wanted to go up. 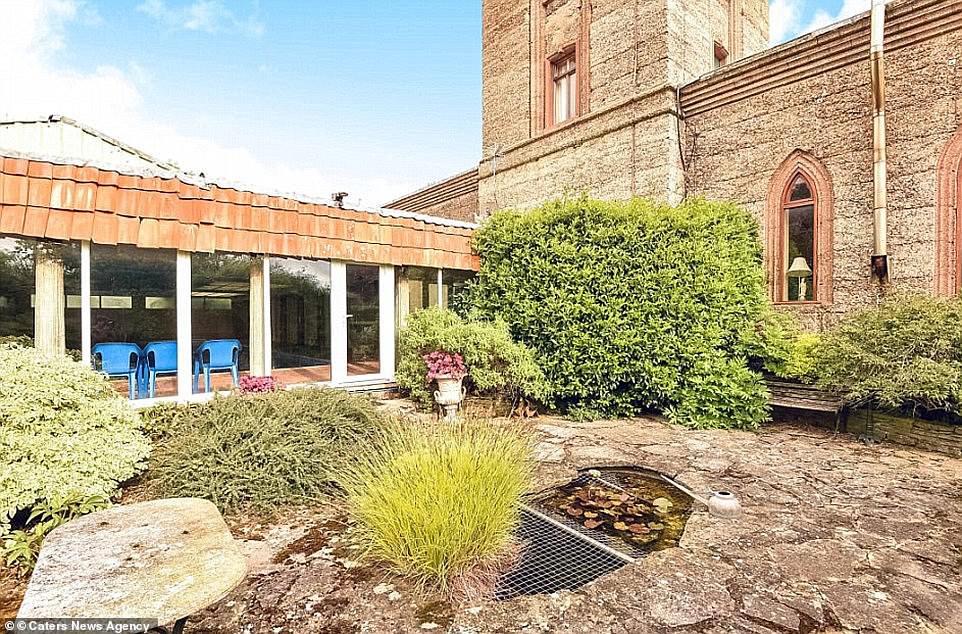 ‘We have the emergency services and two mobile phone providers that use two rooms in the tower and that again is an income of £35,000 a year.

‘We have probably spent more than three quarters of a million on the place over the years, there are 73 Iroko double glazed windows which are basically bomb proof, and there’s six inches of asphalt and four inches of waterproof render on the rooves so that’s not going anywhere any time soon.

‘The tower has been through hurricane winds and been struck by lightning about 10 or 11 times but it’s still standing, and has a lightning conductor installed so that’s fine.

‘It’s never been an ordinary home, you can’t walk into your lounge through 12-foot-high Gothic arches and think that’s normal.

‘It’s always had a good feeling about it, but we have spent 45 years there now and we feel it’s time for some fresh blood to take over.’

It was originally built in the 1880s by Yorkshire barrister and high court judge Andrew Thomas Turton Peterson.

Legend has it that Judge Peterson, a spiritualist, spoke to renowned architect Sir Christopher Wren through a medium who encouraged him to build it.

Peterson’s Folly, as the grade II listed tower is also known, was a labour of love for the man whose use of Portland cement and local gravel and oxide of iron in the building process give the tower its unique look.

From working in India Peterson developed an interest in mysticism and when he died in his 90s in 1906 it is believed he hoped those ascending the tower could reach some enlightenment about their place on Earth. 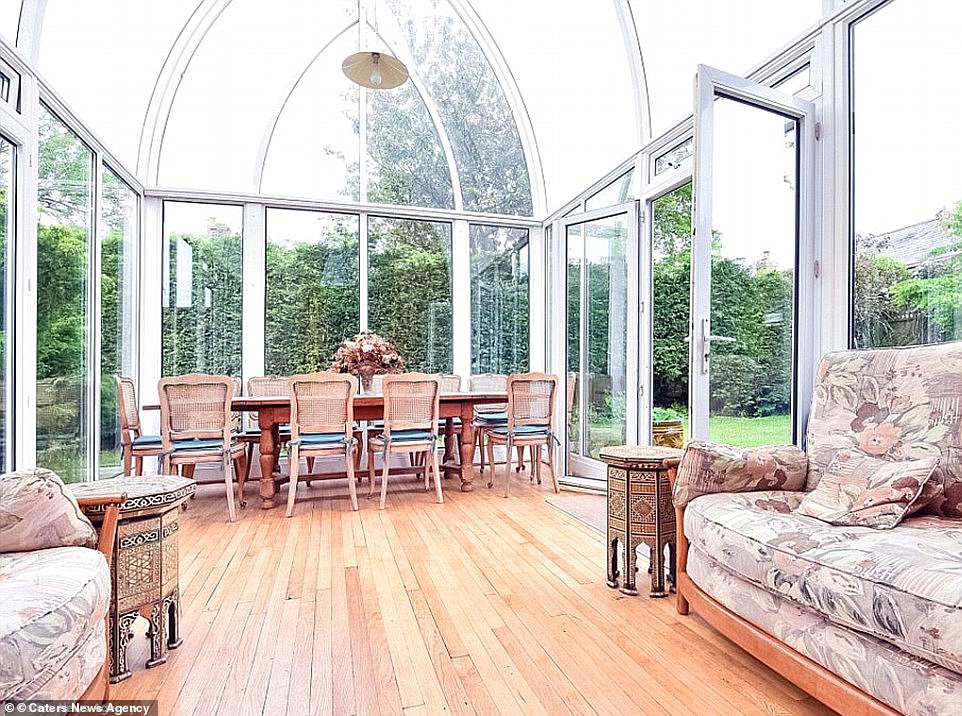 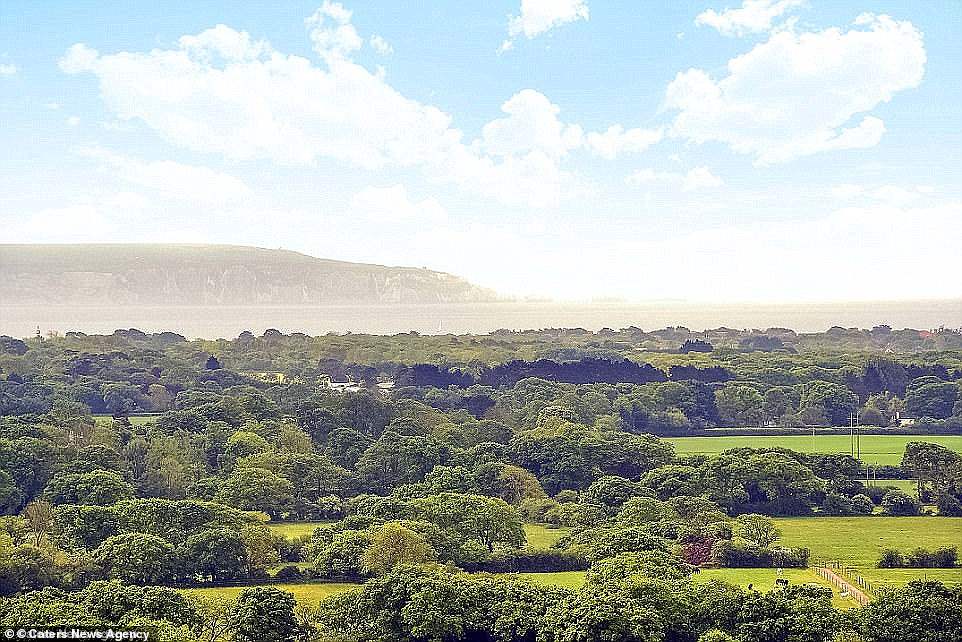 Views from the tower to the coast offer unspoilt views of the countryside and the Solent. The structure which took five years to build by a team of more than 40 men boasts stunning views across Hampshire and the Isle of Wight

It has 330 steps in a spiral staircase to the top

Three quarters of an acre of walled garden

It has several outbuildings, a double garage, two reception rooms on the ground floor, which is shaped like a crucifix.

A charitable employer Peterson also said an admission fee should be charged which would go towards some small cottages he had built for the labour force which helped construct the tower, at a cost of £30,000 at the time.

Entrepreneur Paul said he first took over Peterson’s legacy using the proceeds he made from selling and transporting a Bentley to New York.

Paul, who has bought and sold goods and furniture all his life, said: ‘When we opened as a hotel we had some pretty important guests come to stay including the speaker of the House of Lords and celebrities from stage and screen.

‘We’ve got a rather nice guest book that comes with the tower.’

Paul’s wife Julie said when the family first moved the tower was mostly occupied by pigeons and jackdaws.

She said: ‘One jackdaw became part of the family believing that I was his parent, he spent most of his time on my shoulder telling me what to do.

‘The spiral staircase was like a helter skelter so we cleared out the tower and it took two lorries to move the debris. After this the tower quickly became an office, a sewing room, a woodworking shop and even a garden shed.

‘The swimming pool and garden took up most of our time and of course our two children growing up.

‘We kept the tower tidy and enjoyed amazing views of the Solent, Isle of Wight, winter with the snow on the fields, watching cows driven down the lane to the farm for milking and in June the light summer evenings were spectacular.

‘We opened our doors to our new gorgeous hotel and restaurant in 1991, this was the most exciting time for all of us, our guests were very varied and enthusiastic about this amazing tower, its place in history and construction.

‘Nobody complained about the stairs and they forgave us for not offering room service. We made for being new to the business by offering a very special small restaurant run by two talented young chefs at the start of their careers.

‘The fascination with tall buildings endures, in the recent census the tower has a special position of being the tallest building in Britain occupied by one family.

‘Life in the tower has settled down and we became dog owners at our son’s request and walked more frequently in the New Forest. We also keep fit by going up the 70 stairs to the bedroom at night.

‘We all tended to communicate with each other by using our landline at first, or even walkie-talkies, now the mobiles help us, as they are always in our pockets.’