Victorian homes without power as heatwave grips the state

Thousands of Victorian homes are without power on Monday as a heatwave continues to grip the state.

About 68,597 homes were plunged into darkness overnight, as Victorians sweltered through the hottest night in years, with mercury not falling below 30C until 4am.

Power was restored to the majority of homes shortly before 5am on Monday, but about 18,000 remained without power.

Temperatures in Melbourne are expected to peak at 35C on Monday, with the city centre already soaring to 28C by 6am.

Towns without power stretch across the state, with the Bellarine Peninsula one of the hardest hit 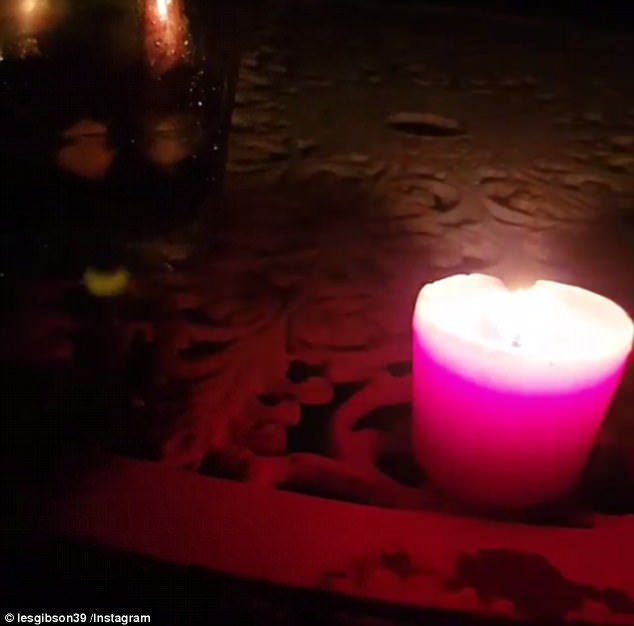 The power outage stretched to the Mornington Peninsula and Geelong.

The Bellarine Peninsula was one of the hardest hit, with more than 15,000 homes in beachside towns down.

The state continues working to restore power to homes still without power.

There is some relief in sight for Victorians on Monday, with a cool change expected to roll in about 3pm.

A thunderstorm is also likely in the afternoon.

Many have taken to social media calling for more to be done on their power being restored. Some towns have reached temperatures of 45C

Minister for Energy, Environment and Climate Change Lily D’Ambrosio said the power outages were due to a ‘new record set for the highest demand.. smashing previous record in 2014’.

‘Nothing to do with insufficient supply, of which we had plenty today,’ she said.

‘We know how frustrating these power outages are for those affected… but there was sufficient energy supply available in Victoria’.

MP D’Ambrosio admitted there were some breakdowns in equipment owned by private power distribution companies.

‘I expect the power companies to fix those faults immediately,’ she said. 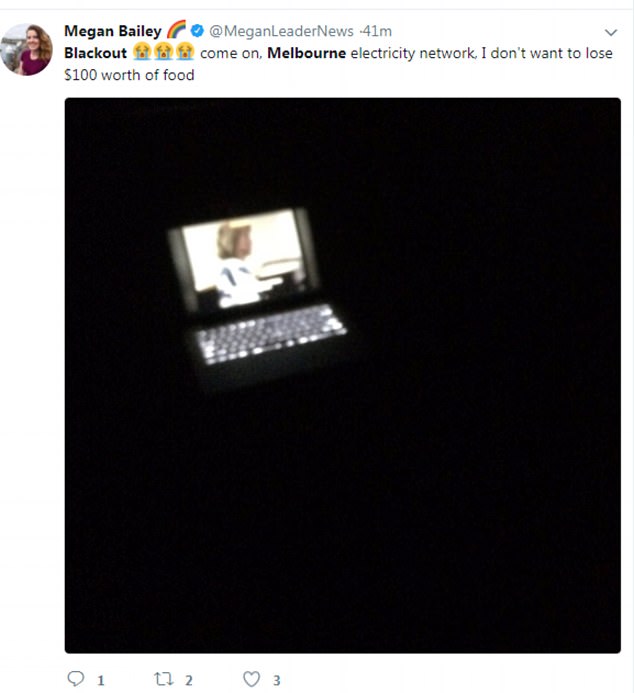 ‘I don’t want to lose $100 worth of food,’ one woman took to social media to say

Spectators at the Australian Open men’s final on Sunday night have also had to endure a stick game as Melbourne sweats through the back end of an unbearably hot Australia Day long weekend.

‘You don’t really get the chance to recover after the 39 degrees very well so it does make it very stressful on the body.’ 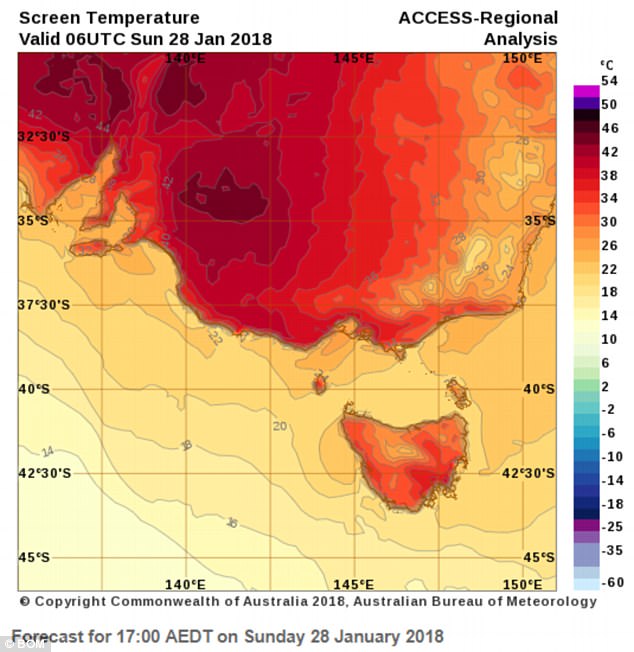 ‘You don’t really get the chance to recover after the 39 degrees very well so it does make it very stressful on the body.’ 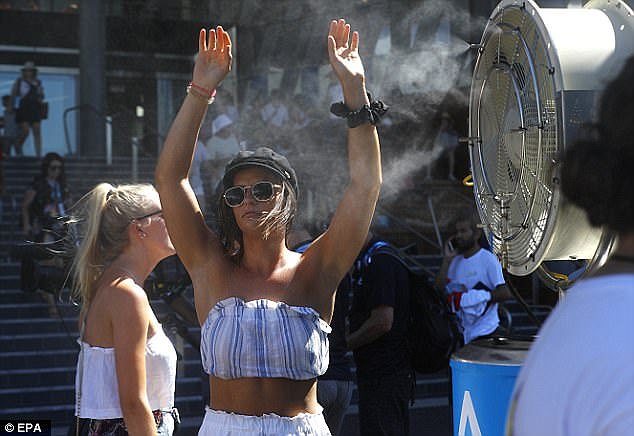 Temperatures soared about 40C on Sunday evening, causing more than 48,000 people to lose power and 15,000 spectators to sweat through the Australian Open men’s final

Fuse faults, the extreme heat and increased demand are to blame for the power outage.

Walpeup had the highest temperature in Victoria at 5.25pm with 45.7C.

‘It’s unusual that you’ll have high temperatures combined with the very high humidity,’ he told AAP. 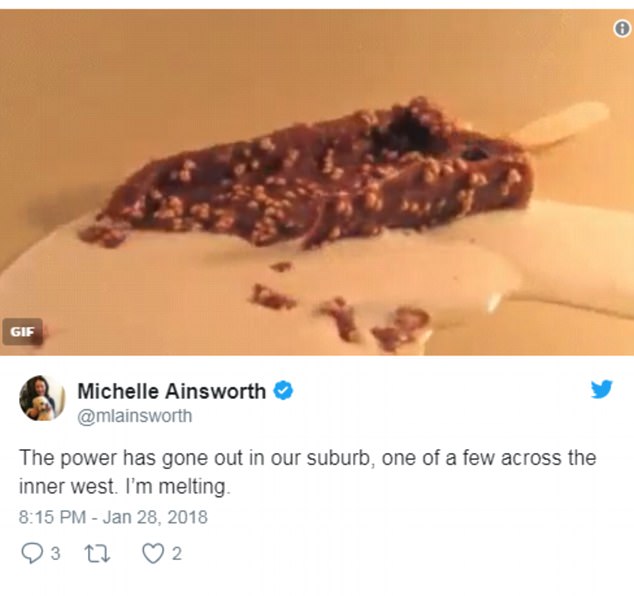 ‘The power has gone out in our suburb, one of a few across the inner west. I’m melting’

‘It doesn’t often get this humid when you’ve got temperatures around 40C.’

Australian Open officials have confirmed they will review the extreme heat policy at the end of the tournament after a number of players made complaints.

Serbia’s Novak Djokovic said the conditions were on the verge of being unplayable and France’s Gaels Monfils said he felt like he was dying on court.

France’s Alize Cornet needed treatment after lying down on the court in her defeat by Elise Mertens. 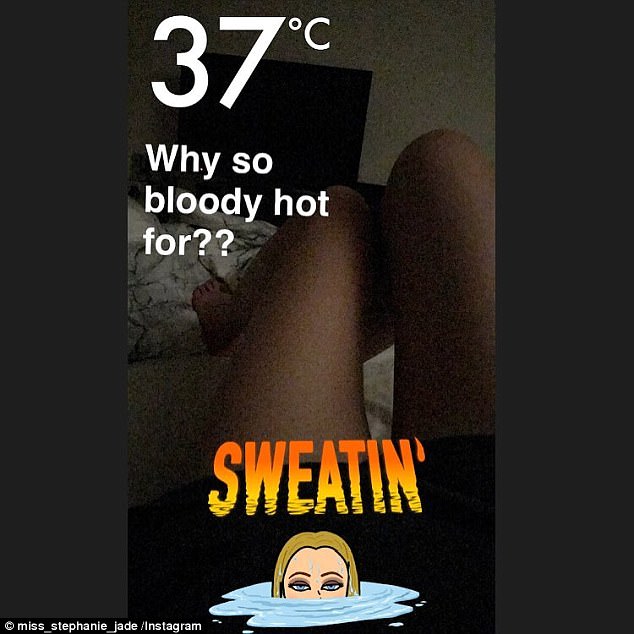 ‘Why so bloody hot for?’ one woman took to social media to ask

‘No power for more than 9 hours now on Melbourne’s hottest day,’ one woman saidd

‘Hottest day and night of summer so far. Power off till 11pm,’ Adam Logan said

‘All of Bellarine Peninsula has power outage again,’ Greg Smith said on Twitter