Victoria’s secrets: From a toothbrush for her hair to tequila to pep her up and a VERY messy bedroom

She recently celebrated the tenth anniversary of her eponymous brand with a tongue-in-cheek video sending up some historic outfit choices – and joked that her microphone was sometimes switched off during her singing career.

Now Victoria Beckham has offered a further glimpse of her surprisingly self-deprecating sense of humour on her own online video channel.

The YouTube account will go live today with a seven-minute video documenting her recent trip to New York for the launch of a new fashion collaboration with Reebok.

The Spice Girl-turned-fashion designer has promised the channel will offer an ‘opportunity to see the real me’ – including everything from candid family scenes to revealing insights into her beauty regime.

‘It’s a dump’: Victoria Beckham in her New York hotel room. The Spice Girl-turned-fashion designer has promised the YouTube channel will offer an ‘opportunity to see the real me’

It certainly has some surprises. Out and about, the mother-of-four is rarely anything less than impeccably turned-out, but when the doors are closed, it’s a very different state of affairs.

At one point in the video, she opens her bedroom door at New York’s The Mark Hotel and warns her guests: ‘My room is a dump.’

The suite, complete with kitchen, is littered with bedding, discarded slippers, water bottles and all the trappings of a very busy visit.

The king-size bed is unmade, a suitcase lies open in one corner, and in the bathroom there are multiple make-up bags – one branded with the initials V B – as well as cotton wool pads and countless bottles of lotion. 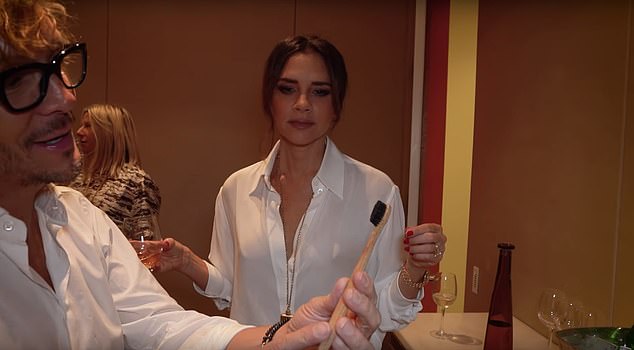 Victoria’s secret: The ‘edge brush’ wielded by stylist Ken Paves. It’s not exactly a toothbrush – even if it looks like one – but a tiny implement used by stylists to tame fine, fly-away locks around the hairline

Victoria then shows the camera two wardrobes of clothes before unveiling the rest of the chaos.

She says: ‘You can see why I drive my husband crazy, because he is super-super-tidy.

‘I’m a germophobe, everywhere has got to be super-super-clean. I mean I will disinfect everywhere, but I am a bit messy, what are you going to do?’

As she walks into the bedroom, she adds: ‘This would be giving David a panic attack right now, a full-on panic attack.’

In a 2015 interview David admitted: ‘I can’t settle in at night before everything is tidy.

‘I will stay up until one o’clock in the morning making sure everything is tidy, whether it’s vacuuming or putting things in the dishwasher.’

She also reveals a surprising secret to her glossy hair – a toothbrush. Her hair stylist, Ken Paves, who has long been a fixture in Victoria’s life, appears in the video showing off the secret tool of his trade, deployed to make last-minute tweaks to the star’s casually-undone style. 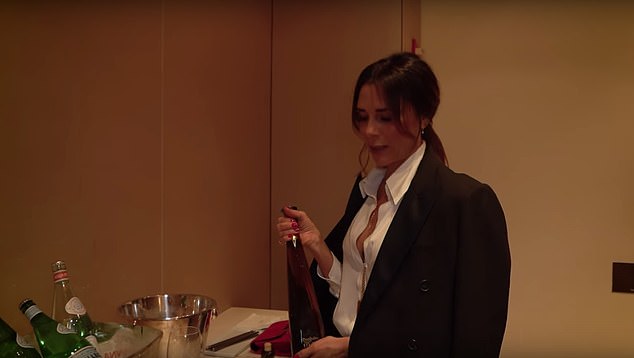 While she is known for following a disciplined diet and exercise regime, when jetlag hits, Victoria has a secret weapon up her sleeve – a bottle of tequila (pictured: Don Julio tequila)

In fact, it’s not exactly a toothbrush – even if it looks like one – but an ‘edge brush’, a tiny implement used by stylists to tame fine, fly-away locks around the hairline.

Later in the video, Victoria looks distinctly less glamorous than usual when she allows viewers to see her with two tissue paper-covered clips holding back her hair to keep her fringe in perfect shape before she goes out.

And while she is known for following a disciplined diet and exercise regime, when jetlag hits, Victoria has a secret weapon up her sleeve – a bottle of tequila.

But she doesn’t go for any old stuff. Her drink of choice is Don Julio 1942, which retails at £120 a bottle. During her packed New York schedule, she arrives at the galleries of auction house Sotheby’s for a drinks reception.

‘We are all a little bit jet-lagged,’ she says. ‘We got up at four o’clock this morning so we thought, “Just take the edge off”.

‘I take my mate Don with me most places, because even when you’re really tired, really not in the mood, Don will get you through.’ Followers of the designer on Instagram will know she recently took a hip flask of her favourite tipple to a performance of Tina: The Musical – having been warned she might not like the wine.

Victoria also delivers a message about the importance of kindness and supporting other women at the launch for a fashion collaboration with Reebok.

And at the heart of it all is her seven-year-old daughter Harper, who stayed at home in London while her mother made the four-day whistlestop trip to New York.

Victoria says: ‘I think that as women we should celebrate the way we look and try and be the best version of ourselves, and not be too hard on ourselves. Be kind, to each other, as well as yourself.’

‘It’s about who is the kindest girl in the class, and about feeling good about yourself and celebrating that and supporting other women as well.’

Victoria has previously spoken of her school days in a negative light, revealing she was bullied because she was ‘different’ from the other children.