This incredible video shows delighted motorists screeching to a halt to scoop up bundles of cash after armed robbers blew up an armoured security truck on a motorway.

One grinning man can be seen stuffing a large wad of cash down the front of his trousers and another with both his arms full of money as drivers fight to gather up the loot.

The motorists appeared incredibly pleased after at least a dozen robbers with high-powered weapons ambushed the GS4 truck on a motorway slip road in Cape Town, South Africa at 6.30pm yesterday.

Members of the public scooped up cash from a G4S security van which was ambushed by a gang of heavily-armed raiders in Cape Town, South Africa 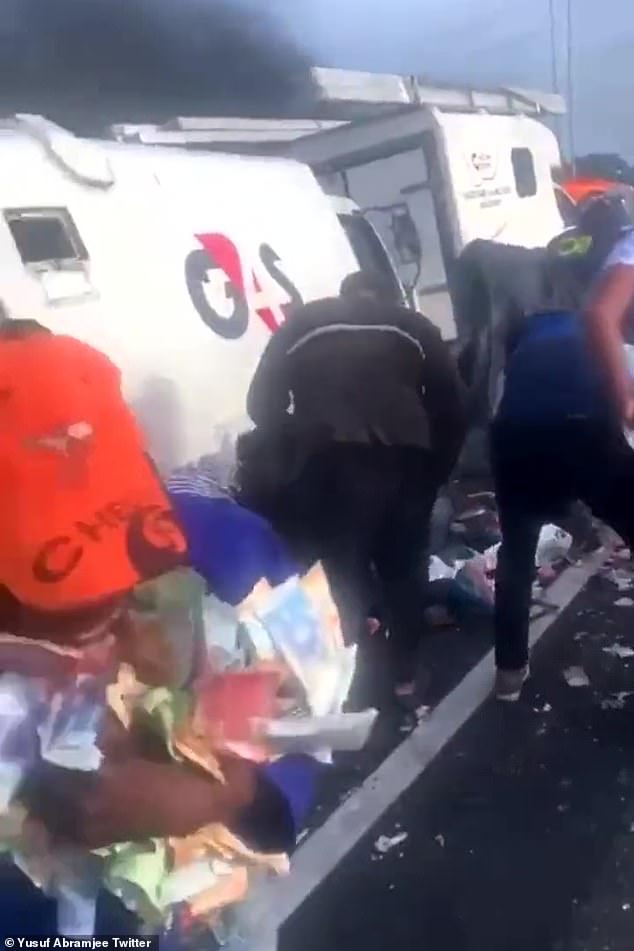 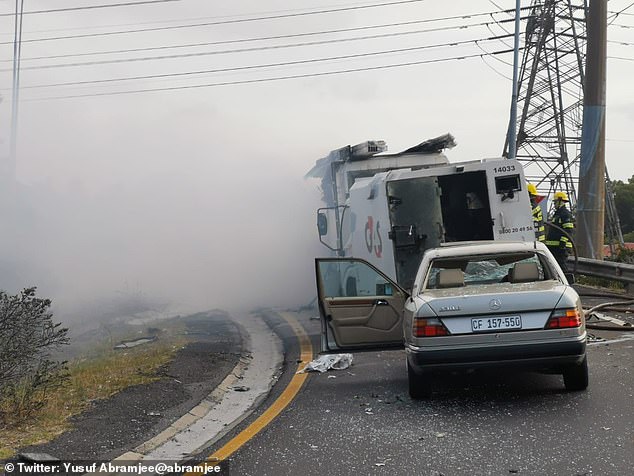 Both the driver and the guard suffered gun-shot wounds before the robbers used high explosives to blow open the side and doors of the truck to get at the money.

After several minutes grabbing as much money as they could the raiders fled and motorists caught up in the traffic jam behind decided that it was their lucky day and took their place.

They abandoned their cars and ran to the abandoned truck and helped themselves to the left overs filling their pockets and underpants and even rucksacks with cash.

Armed police turned up quickly and opened fire on one of the robber’s getaway cars and shot two men and made four arrests while the rest of the gang escaped at high speed.

As soon as they heard the approaching sirens, the members of the public filling their pockets fled the scene.

One suspect had a gunshot wound to his buttocks and another to his right thigh and they along with the two shot security guards were rushed to two different hospitals.

Police spokesperson Lieutenant Colonel Robert Netshiunda said four people were arrested while a number of others fled with an undisclosed amount of money in cash.

He said: ‘It was reported that a Jeep which was driving along the N7 stopped abruptly in the middle of the road causing a light delivery vehicle to collide with the cash van. 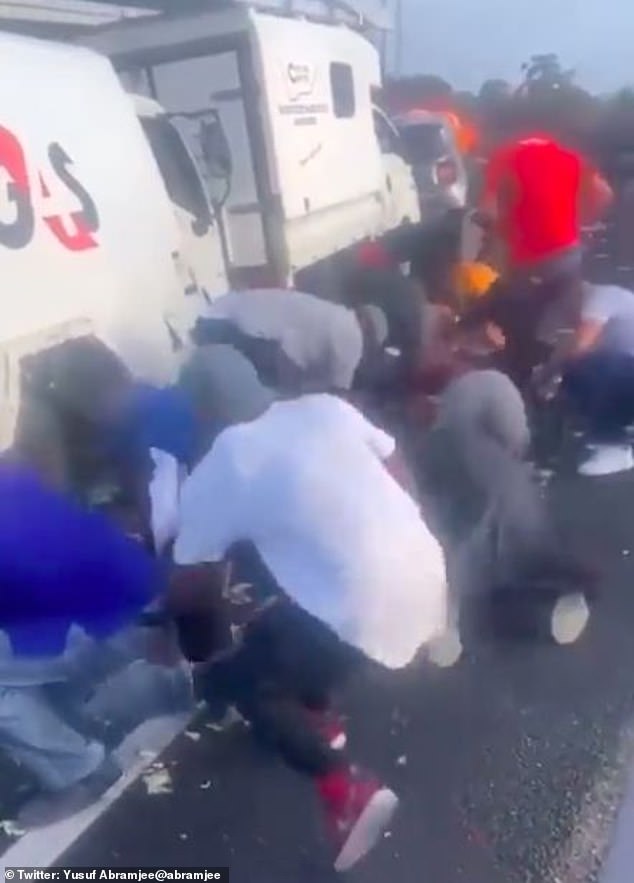 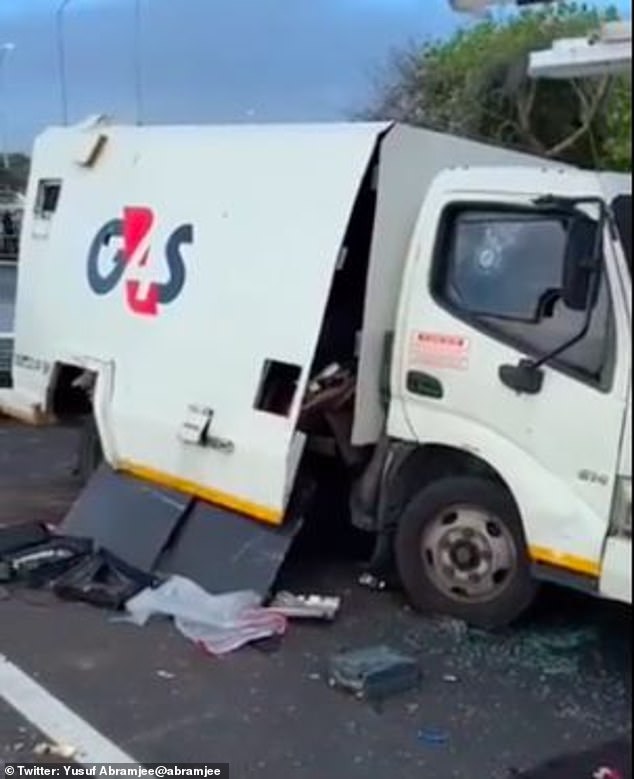 ‘The suspects are alleged to have used explosives to blow the safe open to get at the money before a shootout occurred with the police’s National Intervention Unit.

‘Both the security guard and the driver of the G4S cash van also sustained gunshot wounds during the ordeal and were taken to hospital for emergency treatment’.

The four arrested men will appear in court charged with armed robbery, attempted murder and the illegal possession of firearms, ammunition and explosive devices.

A manhunt is underway for the rest of the armed gang who are believed to have had automatic rifles, machine guns and revolvers as well as high explosives to blow the safe.

The South African Police Service warned all looters to return the money to a police station or risk being arrested for theft themselves if they are identified for stealing at the scene. 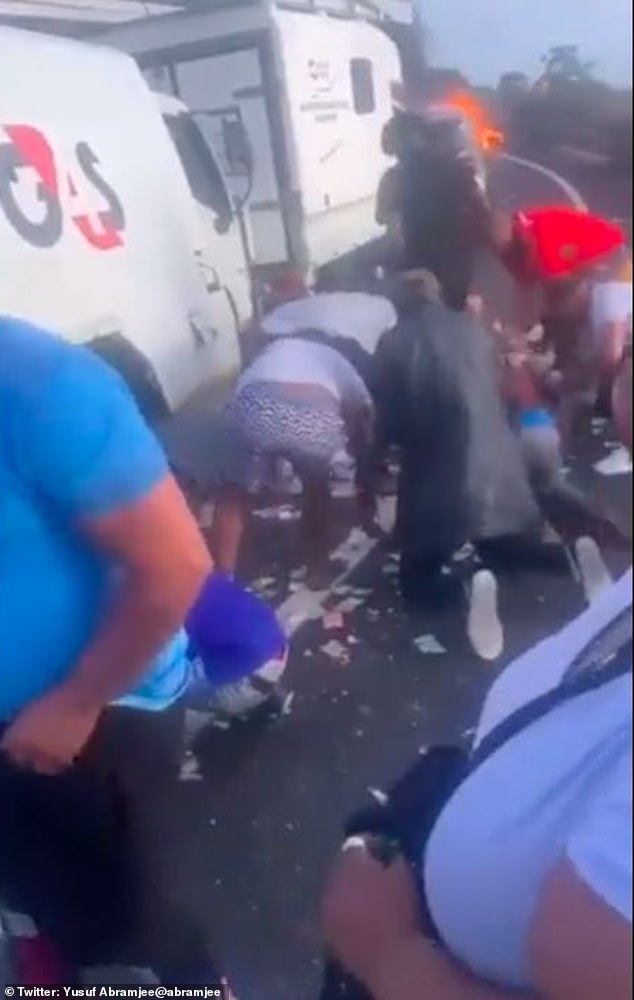