Mark McGowan can stake a claim to being the most combative politician in Australia with his hardline policies and belligerent battles with enemies.

He infamously barred the rest of the country from entering Western Australia for the better part of two years during the Covid pandemic and launched a blistering attack on Peter Dutton when he replaced Scott Morrison as Liberal leader.

But two decades ago the WA premier was yet to cultivate his fierce reputation and adopt the blunt, uncompromising style for which he is known.

The 2000 short documentary The Bell Tower, posted on Youtube by film-maker Mark Regan who made it as a student, reveals a quiet, shy version of the state leader.

Mark McGowan , circa 2000, as he appears in a student’s short documentary and presents as a comparatively soft spoken awkwardly hunched commentator who does not punch hard

Mr McGowan, then 32, cuts a less than imposing figure as he sits awkwardly hunched answering questions in a low nasal monotone.

The tower was built by the Liberal state government of then-premier Richard Court to celebrate the new Millennium, and widely panned at the time.

Mr McGowan, who was first elected to parliament in 1996, aged just 29, is so softly spoken that his answers initially are barely audible.

With his hands clenched firmly in front of him the impression is of a nervous job interviewee, which is reinforced by a cutaway of the young film-makers watching Mr McGowan with much more relaxed postures. 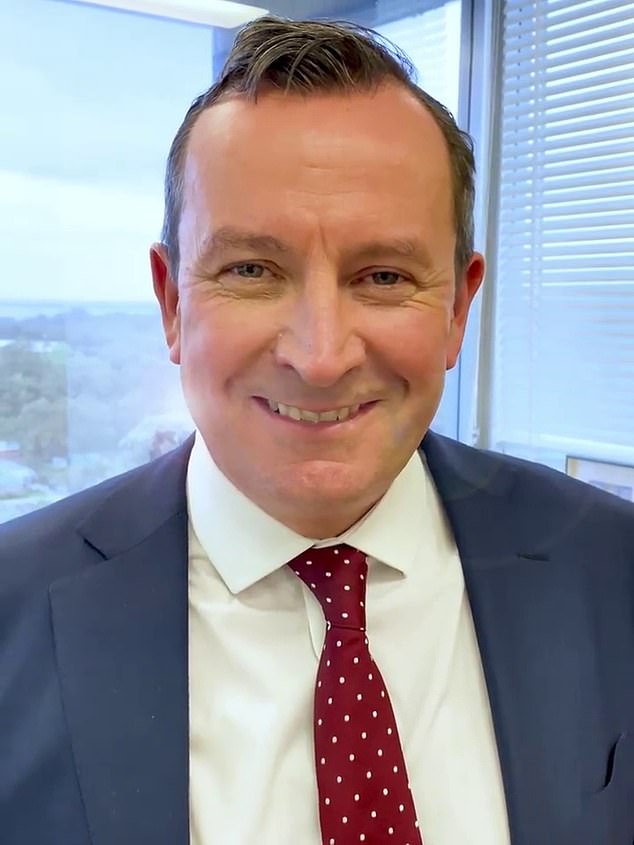 At one point in his continuously delivered stream of thought, which avoids direct criticism of any government figure, Mr McGowan seems to lose confidence and stumble in what he is saying.

He suggests Perth already has enough manmade attractions such as Burswood Casino (now Crown Perth), which ‘appeals to a huge numbers of people who are interested in that sort of social and… ah… umm… gambling activity’.

It’s a far cry from the extremely confident persona Mr McGowan now projects, and his willingness to make himself the centre of attention.

An example was in July last year, when to announce the removal of face mask mandates, the premier posted a close-up video of himself peeling off a mask to the thunderous theme music of 2001: A Space Odyssey and then smiled as if in a toothpaste commercial.

The old footage also revealed he has undergone a radical cosmetic transformation.

While his hair is still short and as it receded early he still has the same hairline, has lightened with age and is much less slicked-down.

Mr McGowan now doesn’t normally wear glasses except for reading and his suits, shirts, and ties are lighter and use more colourful shades than the dark ensemble he sported in 2000.

He now stands open-chested at press conferences batting down reporters and even dismissively questioning the intelligence of Mr Dutton.

‘I actually don’t think he’s that smart, I’ve seen him present on things I don’t really pick up there’s much there as opposed to Scott Morrison who is a clever guy,’ Mr McGowan said.

‘I don’t pick up that Peter Dutton is fit to be Prime Minister.’ 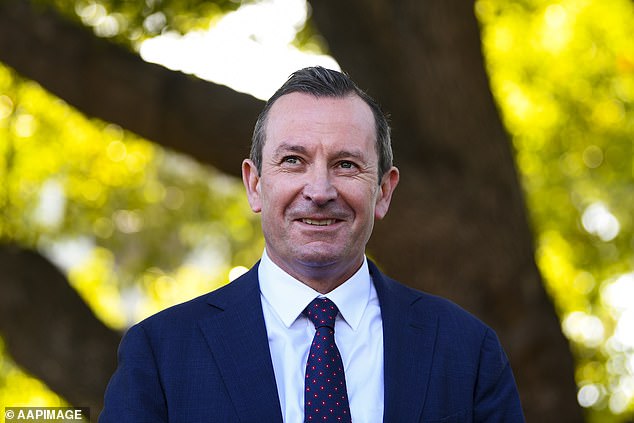 West Australians have electorally embraced Mr McGowan’s assertive style of leadership, giving Labor dominance in a state that has even shown up in the last federal election

Mr McGowan’s alpha-male style appears to be paying dividends in WA where his popularity is little dimmed since the crushing electoral victory he achieved in 2021 when Labor won 53 of 59 lower house seats.

‘Mark showed what leadership looked like in a crisis, Scott Morrison didn’t and he kept on doing that over and over again,’ she said.

Mr McGowan, who on the back of the mining boom has overseen a $5.7 billion surplus over the last financial year, has even started to give backhanders to fellow Labor premiers.

He recently called into question Victoria’s decision to host the Commonwealth Games with that state mired in ballooning debt.