That’s why a video which was leaked Wednesday showing him lose his temper and drop F-bombs during the August 29 taping of his nightly political talk show is so surprising.

The left-leaning O’Donnell is seen growing increasingly agitated at his staff over an earpiece malfunction.

The eight-minute clip was obtained by the web site Mediaite.

It shows O’Donnell vacillating between his normal on-air demeanor and a boiling rage as he introduces a segment about President Donald Trump.

‘What’s going on, why am I losing this, why don’t I have sound,’ an annoyed O’Donnell says.

‘Who’s asking for a Labor Day rundown in my ear?’ 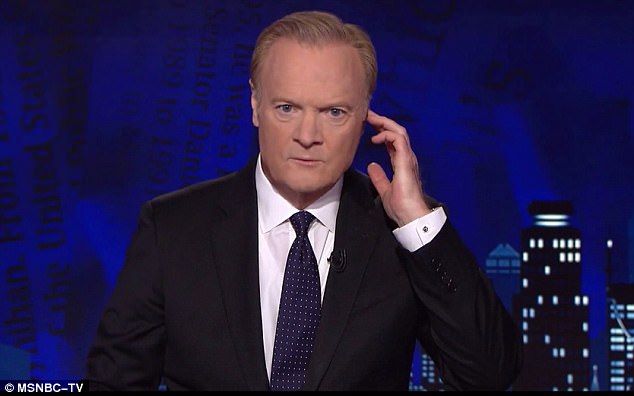 ‘God dammit,’ he says, shaking his head as his anger rises.

In the next segment, O’Donnell reads the script off a TelePrompter before saying: ‘There’s insanity in the control room tonight.’

He is visibly trying to restrain himself as the chaos continues.

‘You have insanity in my earpiece,’ O’Donnell says before using profanity.

The host completely loses his composure seconds later when he blows up on his staff over noises coming from the studio.

‘Stop the hammering!’ O’Donnell hollers at his team.

He then gets up out of his chair and continues the tirade.

‘Stop the hammering up there. Who’s got a hammer? Where is it? Where’s the hammer?

‘Go up on the other floor. Somebody go up there and stop the hammering.

He then references his boss, MSNBC President Phil Griffin.

‘Call f***ing Phil Griffin, I don’t care who the f*** you have to call. Stop the hammering. Empty out the goddamned control room and find out where this is going on.