The Weld County District Attorney’s office has released hours of interview footage in the Chris Watts case, including the moment he was told he had failed a polygraph test.

Video of the moment reveals that Watts managed to keep his composure after he was very bluntly told by a member of the Colorado Bureau of Investigations that his answers were not truthful.

That agent then began the process of trying to draw a confession of out of Watts, who after talking for some time eventually shut down the interview and demanded to see his father.

Watts then confessed to killing Shanann to his dad Ronnie, who stayed in the interrogation room as the two agents returned and rubbed his son’s back while he told them he had murdered his wife.

At that time, Watts denied killing daughters Bella and Celeste, a crime he would not admit to until entering his plea deal at the Weld County Courthouse more then two months after the senseless murders. 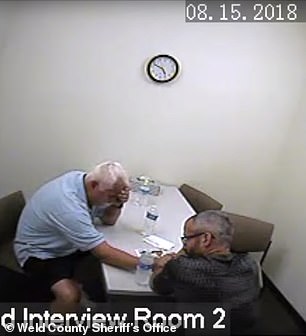 Caught: Video shows the moment that Chris Watts tells his father he murdered his wife Shanann after failing a polygraph test (Watts revelation on left, his father’s reaction on right) 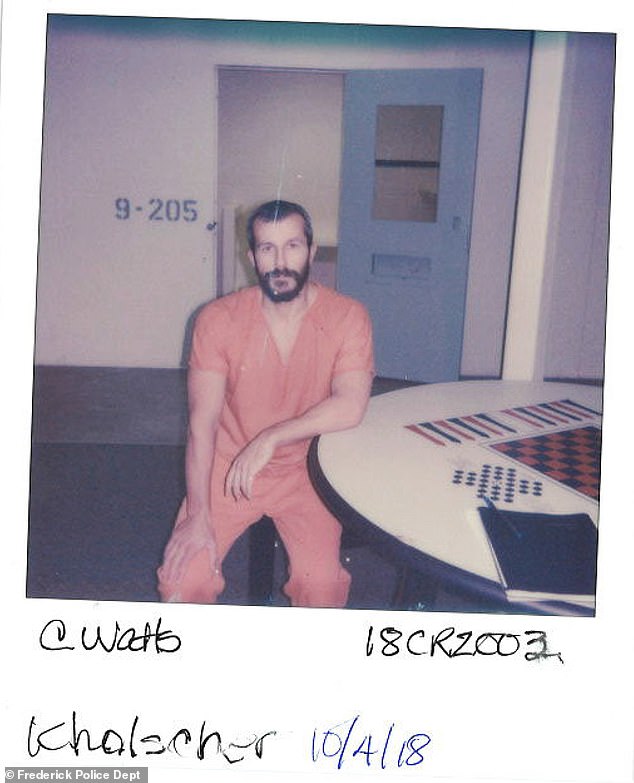 Diabolical: ‘It is completely clear that you were not honest during the testing. And I think you already know that. You did not pass the polygraph test,’ an agent tells Watts (above)

‘It is completely clear that you were not honest during the testing,’ Agent Tammy Lee tells Watts in the video.

‘And I think you already know that. You did not pass the polygraph test.’

Prior that that Agent Lee was seen with Watts in a video discussing his family and relationship with wife Shanann, whom he spoke about in the past tense despite her body having not be discovered at that time.

‘It honestly just makes me sick to my stomach because this is something that I would never do,’ said Watts the day before the polygraph.

‘There’s no way I would harm anybody in my family at all. I am telling you the absolute truth.’

After being told he had failed the text, Watts at first replied ‘OK,’ before adding: ‘I didn’t…I didn’t lie to you on that polygraph…I promise.’

The agents then repeatedly asked Watts to tell them where his family was, but he refused to cooperate and answer the question.

‘If I could have my babies back home right now, I would…I want them back…I want everybody back…that is the God’s honest truth,’ said Watts.

He then revealed that he had cheated on Shanann, a fact that investigators had already been alerted to by a superior at his workplace, who was in the process of sending authorities emails between Watts and Nichol Kessinger.

Agents then tried a different approach, pointing out that Watts’ father had flown across the country to be with him and was in the lobby.

Watts was then asked if he really wanted to lie to his father.

This tactic proved to work, and soon Watts was requesting that he be able to speak to his father.

Agents then informed Ronnie that he would be recorded and filmed if he went into the room with his son, which he acknowledged at the time.

Ronnie was not prepared however to hear what he did, with Watts soon telling his father that he killed Shanann.

‘Oh my God,’ says Ronnie, dropping his head into his hands.

‘She hurt them,’ Watts told his father.

‘And then I killed her.’

Watts then told agents a similar story, claiming that Shanann choked the girls to death and he killed her after witnessing the act.

‘The evil that I saw when I walked behind Shanann when she was [choking daughter Celeste],’ said Watts.

That too turned out to be a lie. 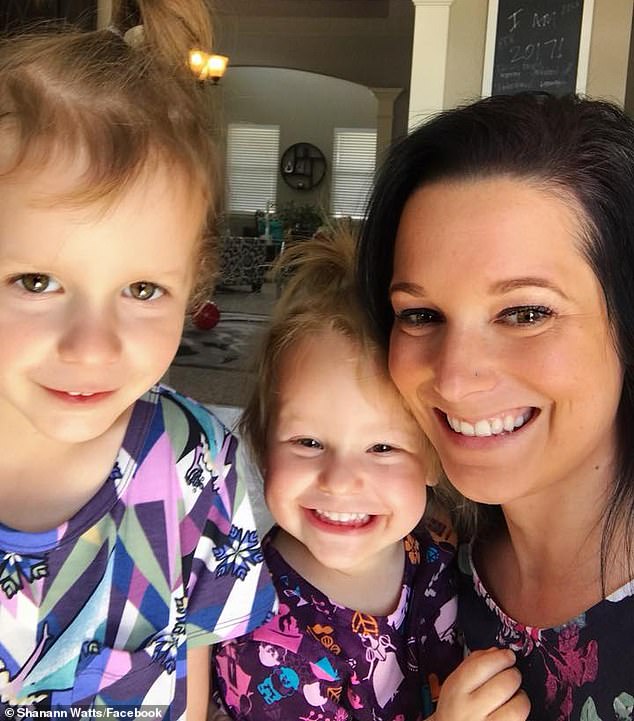 Family: He initially claimed Shanann killed the girls and he murdered her in retaliation, telling his father: ‘She hurt them. And I killed her’ (Shanann with Bella and Celeste just before the murders)

In the lead up to the tragic murders, Watts had taken his daughters to a birthday party on the afternoon of Sunday, August 12.

While Bella and Celeste played in the pool, their father started texting co-worker Kodi Roberts.

At 5.06pm that evening, Watts set in motion his plan for disposing of his wife and daughters’ bodies. He texted Roberts that he would be making the drive out to one of the more distant oil fields that was managed by his company, Anadarko Petroleum Corporation, the following day.

It is the same location where the bodies of his family members were discovered.

He noted that both girls were eager to see their mother, who was due to return home later that night.

Frank Rzucek stated in an interview with police that he spoke with both Watts and Bella, who was eating cold pizza and candy.

He admitted to assuring his daughter that she would see her mother in the morning.

She said that Saturday Watts had asked her to mind the children while he attended a Rockies game. It was later revealed that he was actually on a date with his mistress, Nichol Kessinger.

The babysitter said that while watching the girls, Shannan called at 7.50pm to check on the children while she was away and later posted a photo.