David Walliams is facing new criticism after a 2007 video showing him ‘humiliating’ young men by pulling down their underpants on stage re-emerged on social media.

The bad-taste footage from a BBC documentary features the comedian in a Little Britain stage show in Australia.

The clip which can still be seen on YouTube shows Walliams as predatory gay former children’s entertainer ‘Des Kaye’ groping three males said to be aged 16-18 on stage in a game of ‘hide the sausage’.

The cringe-worthy video features him inviting the audience members on stage where he simulates buggery and appeared to kiss their bare buttocks. 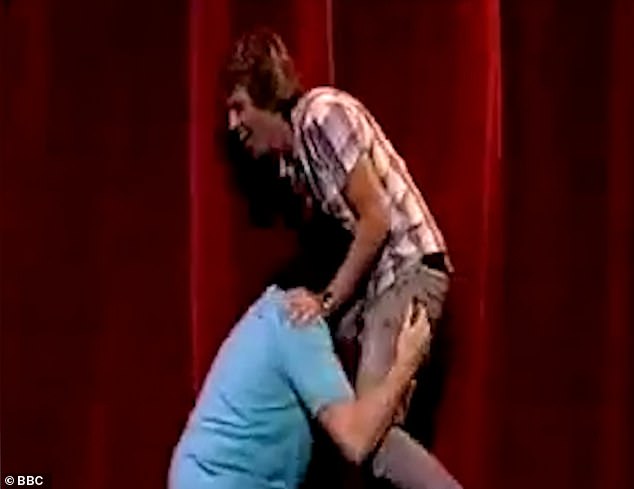 Walliams plays the role of ‘Des Kaye’, described as a predatory former kids’ TV entertainer, who humiliates young men when they come on stage by pulling their pants down 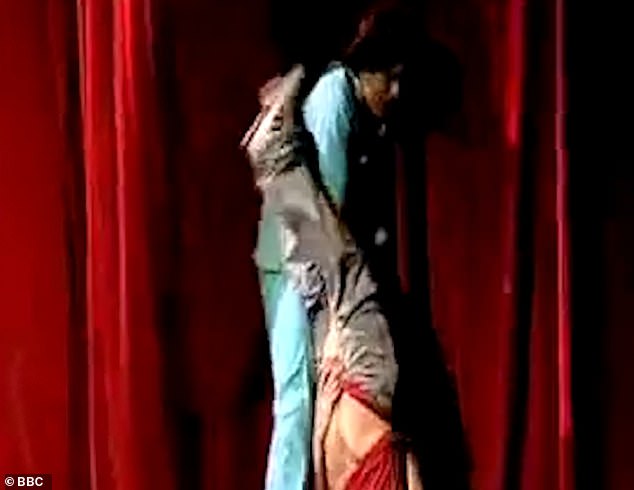 The footage has emerged from a BBC documentary featuring Little Britain on tour in Australia 13 years ago, which the BBC has said has not been available on any platform since 2007

The routine begins with Walliams, now 48, asking a volunteer to come up onto the stage and getting them to confirm their age.

When one answers 16, the controversial comedian says, ‘Bingo’, before adding: ‘You’re a big boy for 16 aren’t you – that’s what I’ll tell the judge.’ 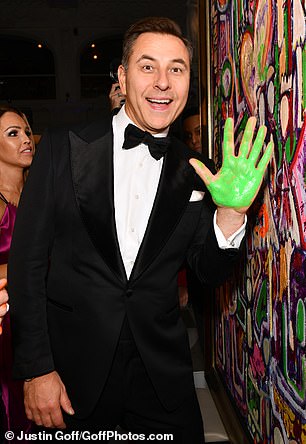 He then kisses the boy on the lips before playing his game of ‘hide the sausage’, which involves him lunging for their trousers, dry humping them and leaving them with exposed buttocks and grappling to keep their genitals covered.

The footage has been blasted by a number of critics who say it portrays a stereotype of gay men as predatory.

‘Williams portrayal of a predatory paedophile is not funny. It’s sickening and unacceptable. That sketch should not be repeated anywhere. It should be withdrawn from public viewing and filed in a film archive so that future historians have evidence of what passed for ‘comedy’ only 13 years ago.

‘Some viewers will have interpreted Walliams as playing the trope of gay men as predators and paedophiles.

Even though Walliams supports the LGBT+ community, his depiction plays into the hands of those who wrongly equate homosexuality with the exploitation of young people,’ he added.

The clip was filmed as part of a BBC documentary narrated by comic Rob Brydon, called Little Britain Down Under, which followed the show’s tour of Australia in 2007.

During filming Walliams read a letter he says was sent to him by a sex abuse victim who criticised his Des Kaye character. 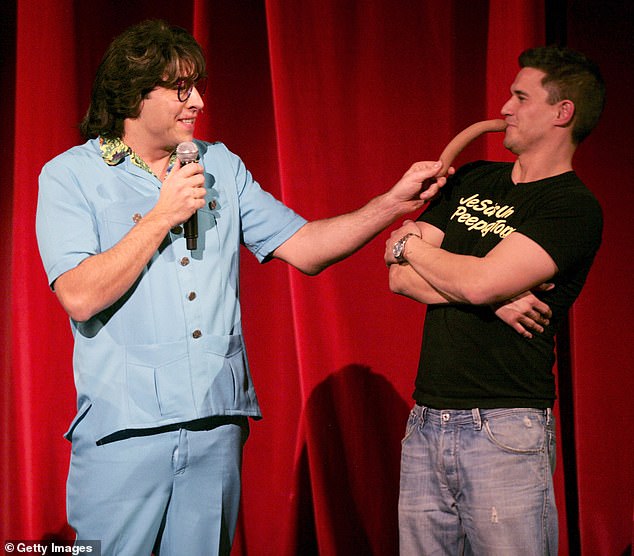 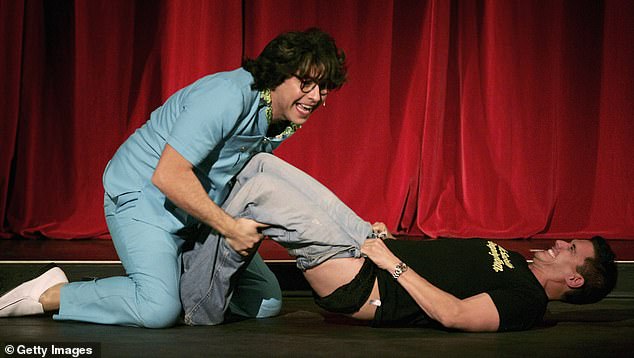 Almost exposing him to the 3,500 people in the audience, he said: ‘That was not meant to happen. You were not supposed to see gonad. A*** crack, yes. Gonad, no.’ 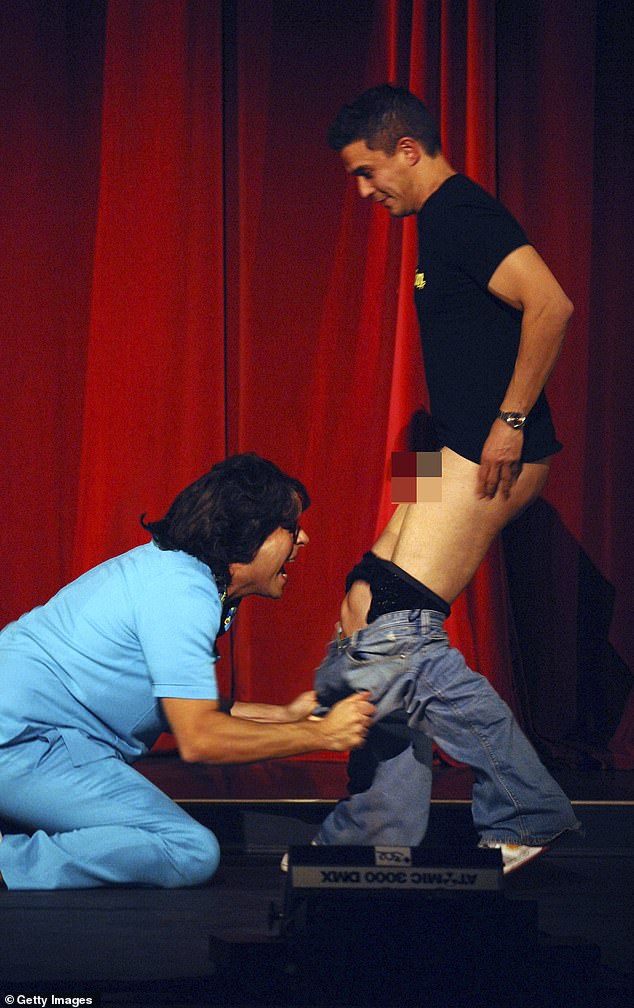 But he defended the sketch by saying: ‘To me there are no subjects you can’t make fun of because if you make that line then you have to get rid of all comedy.’

In a separate recording during another part of the tour, he said: ‘I love cruelty, it’s my favourite thing in the world.

Walliams performed the same sketch many times in 2006 when he and comedy partner Matt Lucas toured the UK on their Little Britain Live Tour.

During a Little Britain Comic Relief Gala at the Hammersmith Apollo in London in November 2006, his character pulled down actor Jeremy Edwards’ jeans and his underwear to near disastrous effect.

Almost exposing him to the 3,500 people in the audience, he said: ‘That was not meant to happen. You were not supposed to see gonad. A*** crack, yes. Gonad, no.’

Walliams did the same to Mark Ronson at a charity event three years later and was forced to apologise to the DJ and music producer saying: ‘Mark is a cool, calm character. To put him in that position was out of his comfort zone.’ 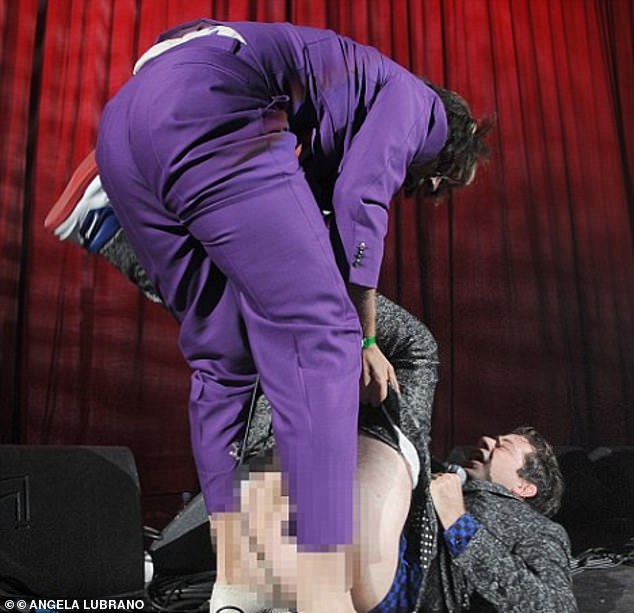 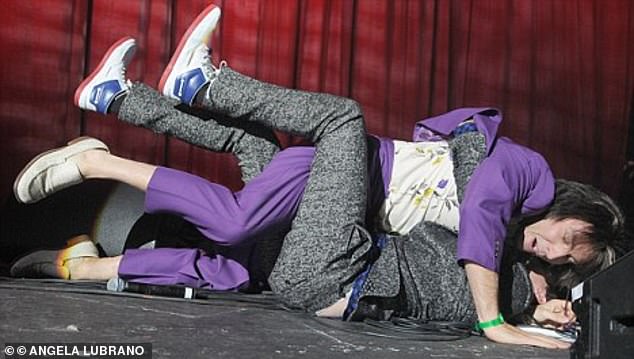 During the performance, the two wrestle on the floor and despite his best efforts Mark Ronson can’t stop Walliams from pulling his trousers down in front of a cheering audience 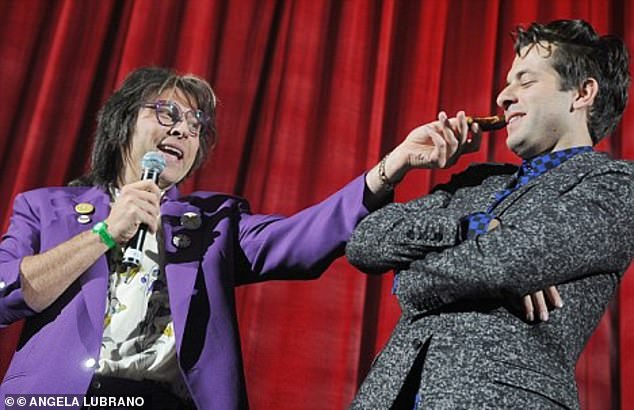 After the sketch Walliams, seen on stage interviewing Ronson, said of the music producer: ‘Mark is a cool, calm character. To put him in that position was out of his comfort zone’

Walliams’ co-star Lucas talks about the controversial sketch in his 2017 autobiography and revealed that some audience members brought on stage reacted violently.

He said: ‘David did his audience participation bit in the first half, as children’s entertainer Des Kaye – Wicky Woo!

‘During a game of ‘Hide the Sausage’, he would almost always wrestle the trousers off some poor lad.

‘You could never get away with that today. In fact he didn’t always get away with it then. Sometimes David would get a clout for his troubles and I’d see him in the wings afterwards, nursing a sore ear.’

It comes after Little Britain was removed from BBC iPlayer, Netflix and BritBox last month amid the Black Lives Matter protests amid concerns about Walliams and Lucas ‘blacking up’ to play characters.

After it was pulled, Walliams tweeted: ‘Matt & I have both spoken publicly in recent years of our regret that we played characters of other races. Once again we want to make it clear that it was wrong & we are very sorry.’

He has said in the past regarding Little Britain that they would ‘definitely do it differently’ in today’s cultural landscape.

And in 2018 he said that some elements of the show were outdated but did not specify which, telling the Radio Times: ‘It’s hard to say specifically how it would be different. There’s all kinds of tolerances that change.

Walliams got into a war of words last week with food writer Jack Monroe over his children’s books which Monroe called ‘classist fat-shaming nonsense.’ 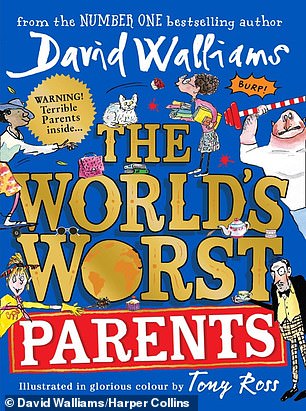 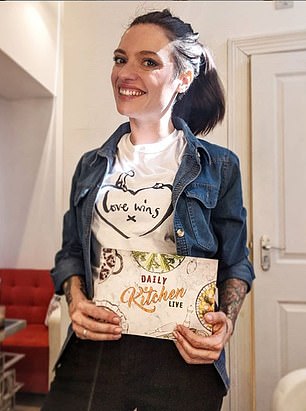 Reviewing the books, the critic underlined what she called negative portrayals of working class characters and an apparent reliance on racial stereotypes and the use of the word ‘fat’ as a ‘derogatory description, pretty much throughout.’

The author’s publisher HarperCollins responded in a statement: ‘David Walliams’s books have a diverse readership which is reflected in their content. He writes about the real worlds of children using comedy as a way of confronting many difficult topics, from the ground-breaking ‘The Boy in the Dress’ to ‘Gangsta Granny’, and which should be considered in the wider context of the overall stories.

‘In his World’s Worst… series he writes cautionary tales using surreal humour to champion underdogs, deflate the pompous and denounce bullies. David Walliams’s books have transformed countless non-readers into booklovers and got families reading together.’

Twitter users also expressed fury after a link to the video of Walliams performing his Des Kaye routine was posted on social media.

One Twitter user @frombaby2bronte tweeted: ‘This is horrendous.’ while

@HerRoyalHeinous said: ‘Humiliating young men as part of his (act) is such a laugh isn’t it? Unamused face.’

Another user @funontheshore said: ‘Jesus that’s horrific. Asking them if they enjoyed it afterwards too as part of the power trip. Yuck.’

John McChrystal who tweets under the name @IneluctViz said: ‘Thought I couldn’t dislike this ‘comedian’ more than I do already. Very unfunny. Appalling.’

Conor Martin whose account is @Conorjmartin96 said: ‘He’s always been odd but wtf.’

Tom Carr of @ItsMeTomC added: ‘This is wayyyy too far even in 2007 let alone nowadays.’

However, a number of users stuck up for the comic.

Fair4All wrote: ‘They’re grown men. Get a grip (pardon the pun). David Walliams is a very controversial comedian, so if they volunteer to go on stage, they should know what to expect.’

Walliams declined to comment on the Des Kaye sketch.

The BBC said: ‘We won’t be commenting on this, but for your background the content is not available on the BBC and has not been pulled recently, having last aired in 2007.’