Terrifying video posted to Instagram on Thursday shows a Toronto man putting his life on the line to rescue his cat stranded on a neighbor’s balcony.

The footage, filmed by a man in an opposite apartment block, shows the devoted pet owner inching across a narrow ledge on the high-rise building in Liberty Village in order to reach the feline.

At the beginning of the clip, the cat’s owner can be seen seen with another friend on their own balcony, seeming to discuss whether or not to embark on the risky rescue operation.

At first, the man struggles as he attempts to climb over the railing of his balcony

Deciding to venture forth to retrieve the kitty, the man then sets off but struggles as he attempts to climb over the railing of his balcony.

He nearly wobbles and falls, before steadying himself and continuing in his quest.

The brave owner then edges along the narrow plank and reaches his cat and pulls it into his arms.  He carries the kitty back to safety by returning along the ledge. 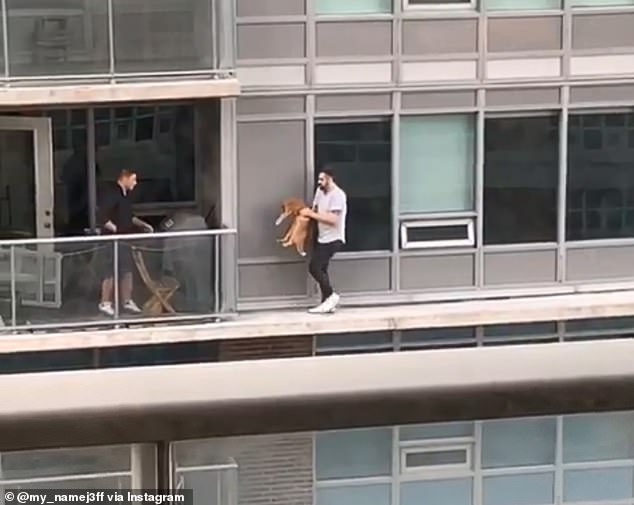 Speaking later with blogTO, the owner – who wants to remain anonymous – says he saw that his fluffy male cat was distressed on the neighbor’s balcony.

‘He was trying to squeeze back under the glass and getting stuck almost, I was afraid he was going to hurt himself,’ the owner explained.

The man knocked on the neighbor’s door, but no one was home, and he realized he needed to act quickly.

He has now been hailed a ‘hero’ for the selfless devotion he showed to his beloved animal. 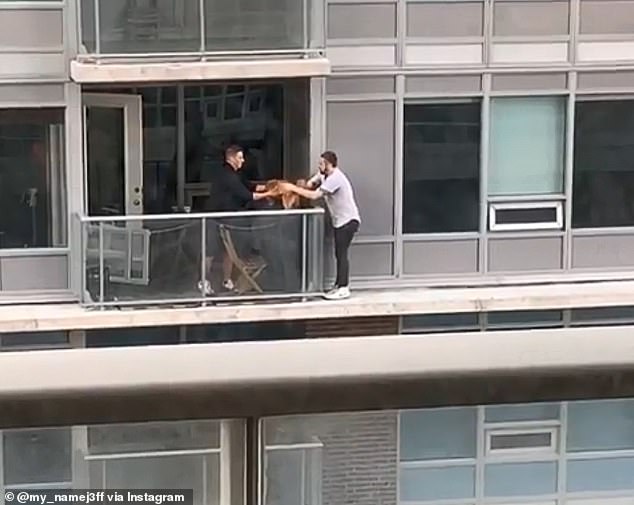 The man then hands the cat to a friend, with the rescue mission a success