This is the shocking video showing a man accused of raping a pregnant woman and a four-year-old child being lynched by an angry mob as cops try to intervene.

The bloody scene was recorded in the municipality of Soledad, in the northern Colombian department of Atlantico and the suspected rapist later died in hospital.

The lynched man, nicknamed ‘Boca de Perro’ (Dog mouth), was an alleged serial rapist, who was accused of raping at least four victims, including a four-year-old girl and a pregnant woman, according to local media.

The gruesome video shows the man already on the ground and covered in blood.

This is the shocking video that shows a man, who is accused of raping a pregnant woman and a four-year-old child, being lynched by an angry mob as cops try to intervene in Colombia

The man starts to move and gets up while locals can be heard shouting: ‘He’s still alive.’

Police officers in fluorescent yellow vests arrive at the scene and stand near him, firing shots into the air to get the mob to back off, but they cannot stop the furious crowd from continually attacking him with rocks and metal rods.

Local media report that the two officers had to call another patrol car to finally stop the angry mob.

They finally managed to get the alleged rapist to a nearby hospital, where he later died from multiple head traumas.

Hours before the violent scene, a 17-year-old girl had told family members that the man had just raped her in a rural mountain area.

The mother of the unnamed teenage girl said: ‘He warned her not to tell anyone because he knew she had two brothers and where they lived. He said if she ratted him out he would kill us all.’ 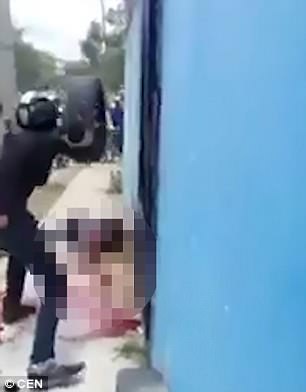 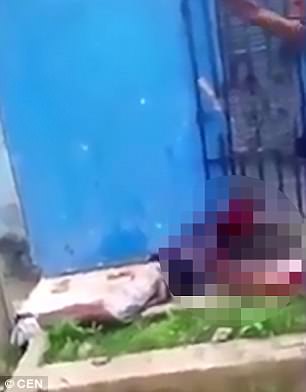 The lynched man, nicknamed ‘Boca de Perro’ (Dog mouth), was an alleged serial rapist, who local media say has been accused of raping at least four victims, including a four-year-old girl and a pregnant woman

The mother went on to say that the aggressor did not use a condom and smoked cannabis and snorted cocaine as he abused her daughter.

According to locals, it was not the first report of its kind about the man, and tired of the inaction of authorities, they decided to take matters into their own hands.

The accused rapist was hiding in the mountains, where locals say he had a den set up with a mattress on the floor and girls’ clothes strewn around.

According to the accounts of the women, they were intercepted as they walked through a rural area, threatened with a knife and dragged by the hair to his mountain lair.

‘Dog Mouth’, who has not yet been formally identified, was also accused by a 23-year-old Venezuelan woman who says he ‘raped her from behind’. When she went to the police she said they would not register her complaint because of her nationality.

A family member of the lynched man described him as a peasant who had arrived in the city only a few days ago. They said: ‘He didn’t deserve to die like that, it’s inhuman, not even for an animal, even if the accusations are true.’