Just days after President Donald Trump declared that he was never friends with pedophile Jeffrey Epstein, footage has emerged of the two at a private party back in 1992.

Producers at Morning Joe unearthed the video, which shows that Epstein was a guest of Trump’s at Mar-a-Lago in November of that year and was surrounded by a group of models and cheerleaders.

It was one of Trump’s final private parties before the financially-strapped real estate scion turned his residence into a members-only club.

Epstein brought his then-girlfriend Ghislaine Maxwell along for the outing, years before she would use the club as a hunting ground for underage girls according to court documents.

In one video, the women described in court documents as Epstein’s pimp can be seen dancing behind Epstein and Trump as they assess the dozens of young females who had taken over the club that night.

‘Look at her back there, she’s hot,’ Trump tells Epstein.

Pedophile Epstein briefly feigns interest in the ‘hot woman,’ and soon after is seen doubling over with laughter when Trump whispers something in his ear.

Three’s company: Donald Trump (center)  is seen partying with Jeffrey Epstein (right) and his then-girlfriend Ghislaine Maxwell (left) in 1992 at a private party at Mar-a-Lago 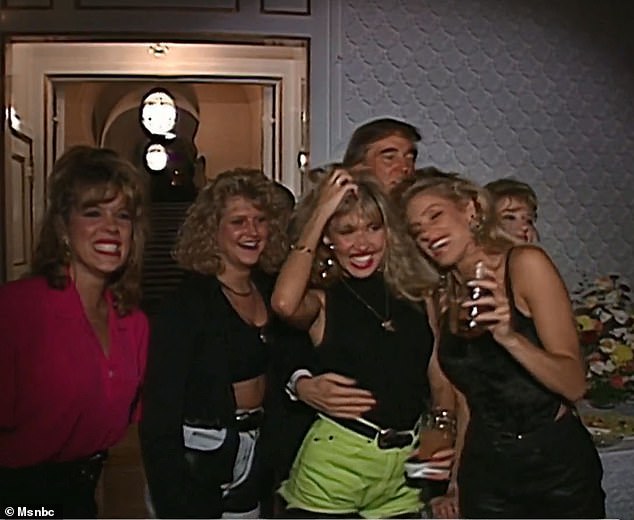 Fan-tas: Trump (above with guests at the party) turned his residence into a private club after facing financial hardships in the early 1990s 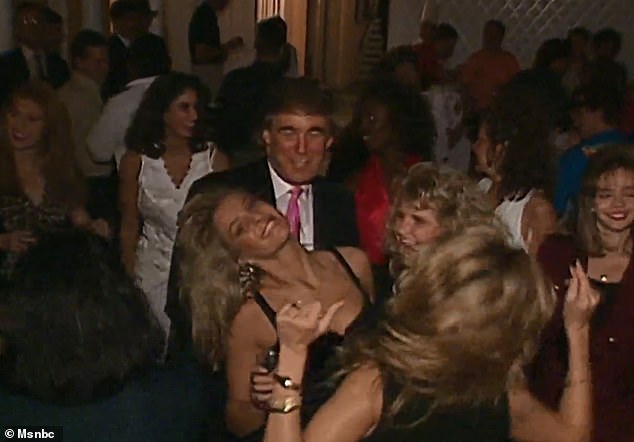 Doing the tan-tan: The footage was uncovered by producers at Morning Joe, and also shows Trump dancing with a bevy of young models who were on hand that night (above) 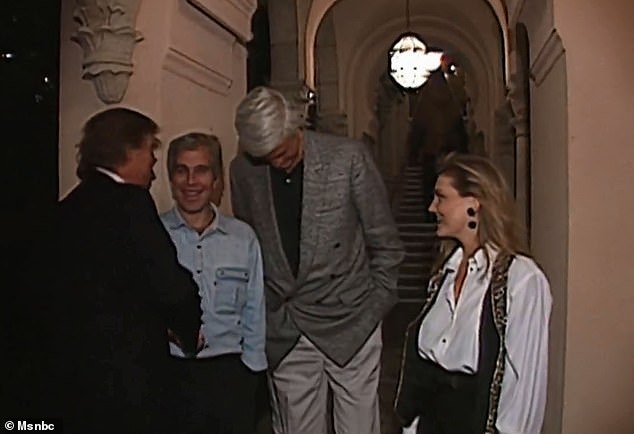 Future hunting ground:  ‘I had a falling out with him a long time ago. I wasn’t a fan. I was not a fan of his. That I can tell you,’ Trump said of Epstein last week (Epstein and Trump shake hands above) 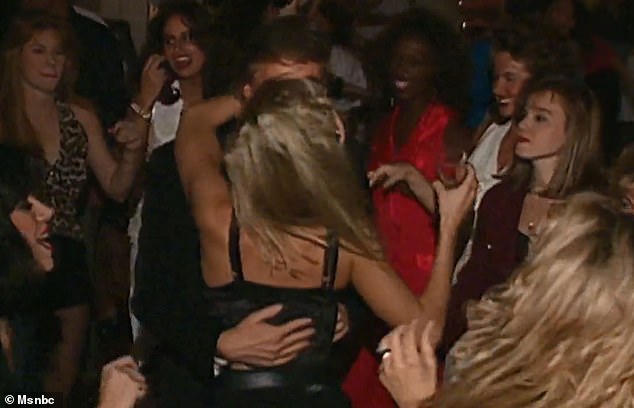 Leather daddy: He even appears to kiss one (above), just a few months after finalizing his divorce from first wife Ivana Trump and while on-and-off with Marla Maples

President Trump insisted he wasn’t friends with Epstein after he was arrested for sex trafficking last week.

A majority of the footage shows Trump dancing with the bevy of beauties on hand that evening.

He even appears to kiss one, just a few months after finalizing his divorce from first wife Ivana Trump.

The kiss is a bit of shock given the fact that Trump clearly states that he is aware NBC is filming the footage.

He was dating Marla Maples at the time, though the two were famously on-and-off for years.

A few months after the video was shot she became pregnant with his fourth child, Tiffany.

There is no evidence that Epstein had been charged or even accused of a sex crime involving minors at the time of this party.

The event looked remarkably similar to one that was attended by 28 young women from a ‘calendar girl’ competition,  The New York Times reported.

George Houraney, a Florida-based businessman who ran American Dream Enterprise, said that he put the event together at the behest of Trump, and was shocked at what he saw when he arrived at Mar-a-Lago that night.

‘I arranged to have some contestants fly in. At the very first party, I said, “Who’s coming tonight? I have 28 girls coming.” It was him and Epstein,’ said Houraney.

‘I said, “Donald, this is supposed to be a party with V.I.P.s. You’re telling me it’s you and Epstein?”‘

A man who looks similar to Houraney can be seen at one point in the video, along with a woman who could be his business partner Jill Harth. 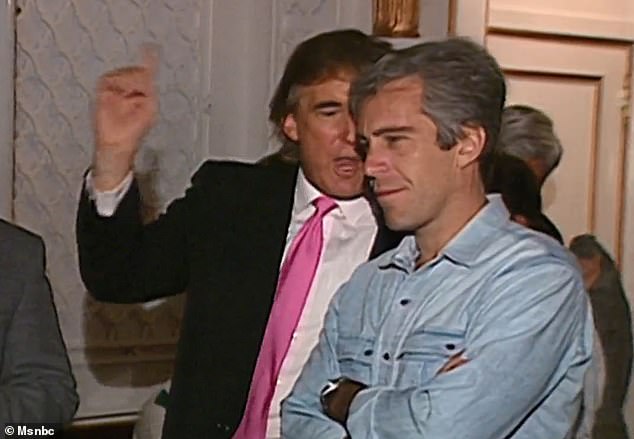 Old school: Seven years after this party, Maxwell recruited at least two underage spa workers from Mar-a-Lago for Epstein, according to court filings (Epstein feigns interest at a woman Trump describes as ‘hot’) 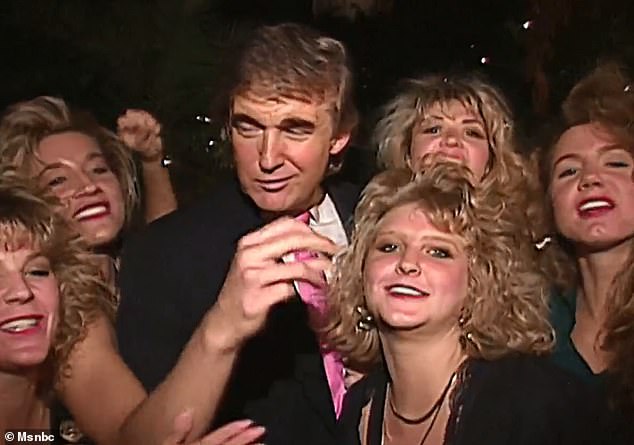 Trump poses up with the ladies in the footage, which he acknowledges is being filmed by NBC at one point 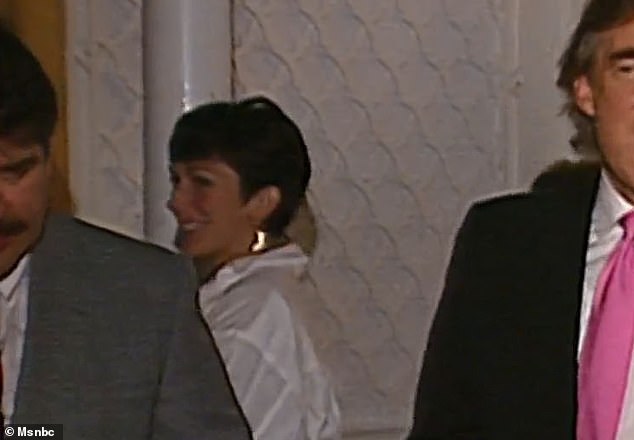 One year prior, Maxwell had lost her father Robert when he mysteriously died while aboard his yacht, Lady Ghislaine. She is seen behind Trump at the party 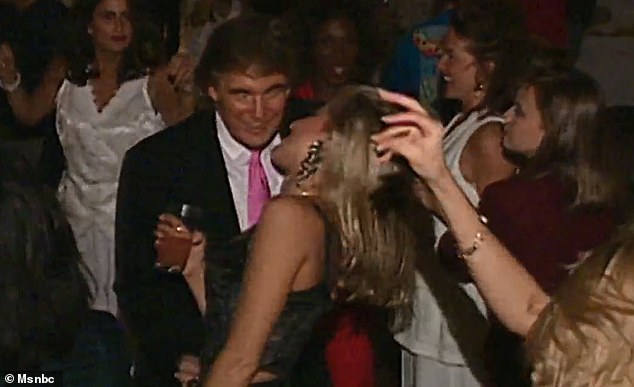 Two months after this footage was shot, Marla  became pregnant with Trump’s fourth child, Tiffany. Marla and Trump, who were famously on-and-off in their relationship, were dating at the time of the party

Houraney also said that he warned President Trump about Epstein, telling him that he ‘pretty much had to ban Jeff from my events.’

President Trump did not seem concerned though according to Houraney.

‘I said, “Look, Donald, I know Jeff really well, I can’t have him going after younger girls,”‘ recalled Houraney.

‘He said, “Look I’m putting my name on this. I wouldn’t put my name on it and have a scandal.”‘

Houraney was partners with Jill Harth at the time, both professionally and romantically, who would go on to file a lawsuit against President Trump claiming he sexually harassed her for years after their first meeting.

President Trump has denied that allegation.

He would eventually ban Epstein from the club, though he was never an actual member.

A former campaign worker said that he was told this ban was put in place when President Trump learned that Epstein had tried to recruit one of his workers.

And the relationship between the two soured to the point that Epstein actually blamed President Trump for the investigation into his alleged sexual abuse of young girls.