Disturbing video footage shows wild salmon swimming though the Columbia River with their bodies partly dissolved as a result of last month’s extreme heatwave in the Pacific North west.

As a result of the historic heat wave that crippled the Pacific Northwest over the past two months, wild salmon are dying from record high water temperatures, suffering from red lesions and white fungus that have broken out all over their bodies, according to a newly released video.

The footage, released by the non-profit organization Columbia Riverkeeper, shows a group of sockeye salmon swimming in the Columbia River stressed from heat.

The video was taken on July 16 at the Little White Salmon River, a 19-mile long portion of the Columbia River in Washington state. 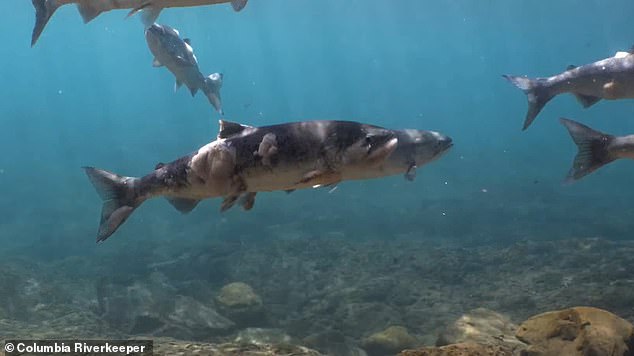 Wild salmon are dying from record high water temperatures, suffering from red lesions and white fungus all over their bodies, according to a newly released video

‘The sockeye here are dying. They are suffocating,’ Don Sampson of Northwest Tribal Salmon Alliance said in a narration.

‘You can see they are in lethally hot water. We’re in a salmon crisis and it’s time for Congress to act.’

In an interview with The Guardian, Brett VandenHeuvel, the executive director of Columbia Riverkeeper, said the salmon were swimming upstream in the river from the ocean when they suddenly changed course, likening it to escaping ‘a burning building.’

The video was taken on July 16 at the Little White Salmon River, a 19-mile long portion of the Columbia River in Washington state

He also compared it to a person running a marathon in 100 degrees Fahrenheit temperatures, but for the fish, it’s a life or death situation.

‘The difference is that this isn’t recreation for the salmon,’ he added. ‘They have no choice. They either make it or they die.’

It’s likely that the salmon, which were on their way to spawn, will not be able to do so and wind up dying from complications as a result of the heat stress.

Earlier this month, researchers said the heatwave – caused by a ‘heat dome’ that hung over the Western US and Canada and spiked temperatures to 121 degrees Fahrenheit in some spots – killed over 1 billion sea creatures, DailyMail.com reported.

Although the heatwave and climate change have played a massive role in the dire situation experienced by the salmon, VandenHeuvel added that dams that have held up water flows and caused water temperatures to rise added to the situation.

It’s unclear how many salmon have died from the conditions, but there are ‘tens of thousands’ in the Columbia and the Lower Snake rivers.

Sampson told The Guardian that the conditions reminded him of 2015, when roughly 250,000 sockeye salmon died in the Columbia and its offshoots after a hot summer.

Sampson said the situation is likely to get worse in the coming months, something VandenHeuvel agreed with, pleading with lawmakers to take action.

‘I see this as a deeply sad vision for our future. But I also see it as a call to action. There’s mitigation measures we can take to save the salmon, to cool our rivers,’ VandenHeuvel added.

‘And if this video doesn’t inspire some serious reflection, then I don’t know what will.’