Three people, among them a 7-year-old girl, were wounded in a daytime shootout at a Cleveland gas station that was captured on surveillance video on Tuesday and released to the public on Sunday.

The shooting took place at around 5pm on Tuesday at a gas station located at the intersection of Waterloo Road and East 156th Street, according to Cleveland.com.

Police arrested four men in connection with the shooting, including two men who were shot. A total of more than 50 rounds were fired during the incident.

Investigators say the shooting started as an attempted armed robbery.

In the video, the driver of a black SUV parked at the pump is seen returning to his car after walking out of the convenience store having purchased items.

Surveillance video from a Cleveland gas station shows a shootout between suspected gang members on Tuesday. In the image above, a gunman opens the passenger side door of a black SUV and shoots a man inside 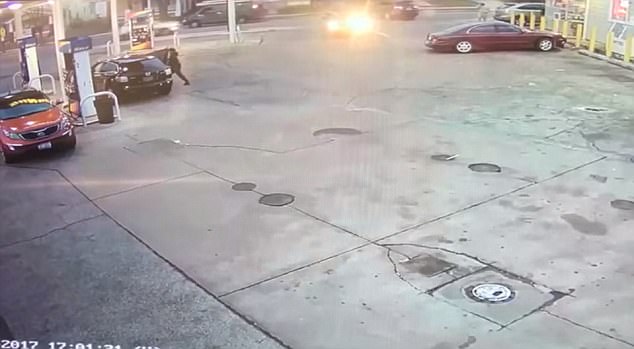 The passenger inside shoots the gunman who opened the passenger side door, wounding him in the stomach 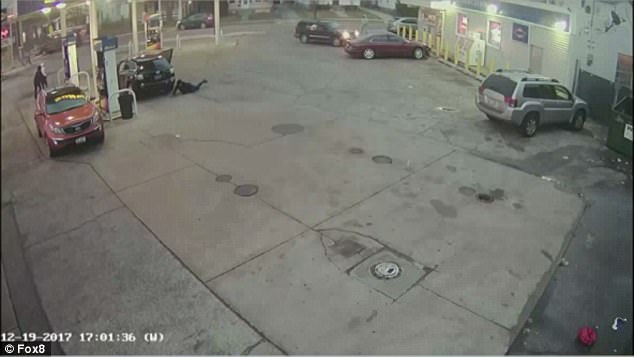 In the top left corner, a man in black is holding the driver of the black SUV at gunpoint while a wounded passenger crawls on the ground. In the top right corner, another gunman is seen firing shots into the gas station 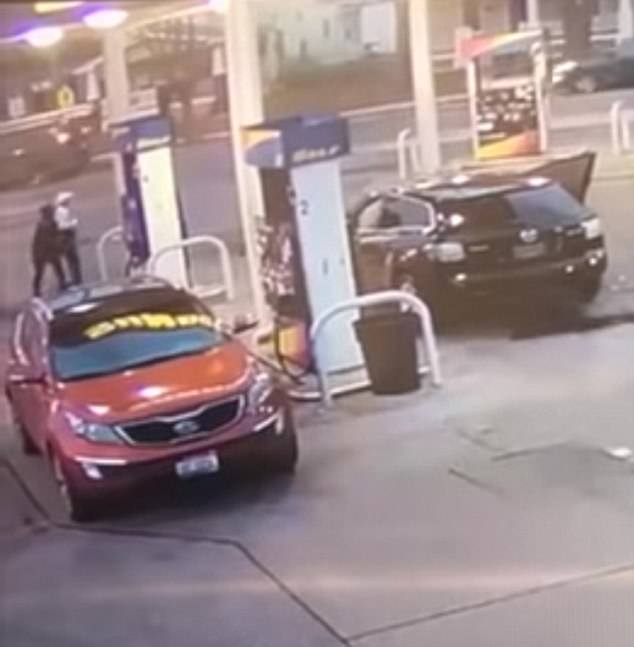 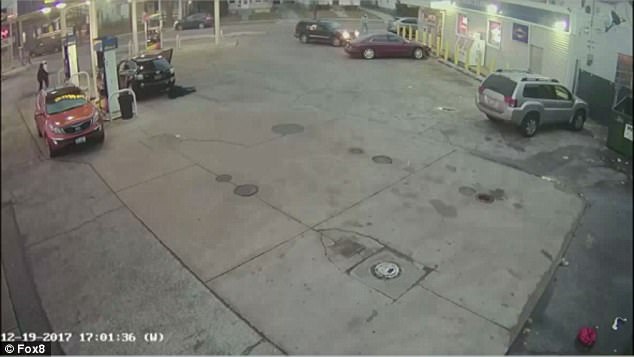 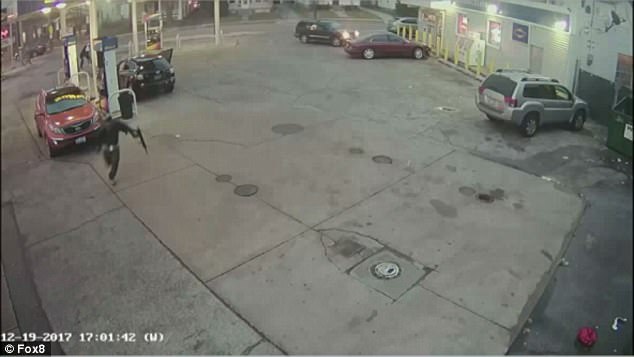 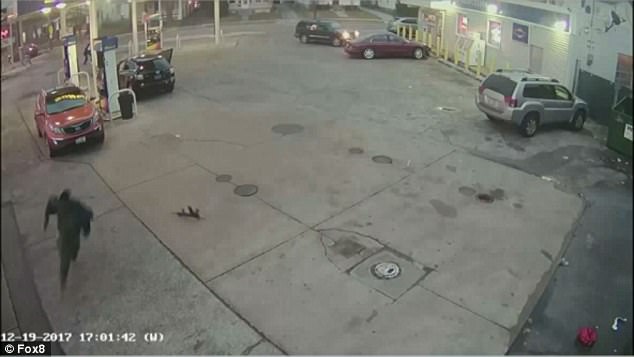 The wounded passenger then drops the AK-47 and runs toward another gas station, where he collapsed

The driver is then accosted by an armed 30-year-old man who holds him at gunpoint.

The armed man then uses the driver as a human shield.

Meanwhile, two other men, ages 18 and 27, are seen running toward the SUV.

The 27-year-old man is armed with an AK-47 assault rifle.

He is seen in the video opening the passenger side door of the SUV and firing at a 25-year-old man inside. 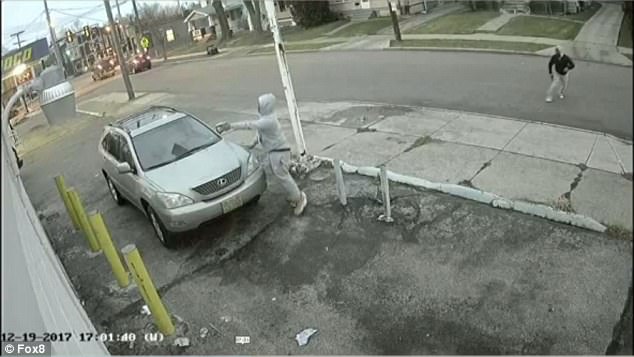 The image above shows two other suspected gang members who were involved in the shootout. This image was taken from a surveillance video from behind the gas station where the shooting took place 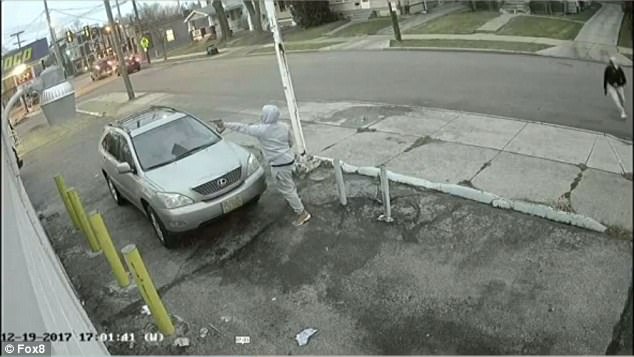 Police arrested four men in connection with the shooting, including two men who were shot. A total of more than 50 rounds were fired during the incident 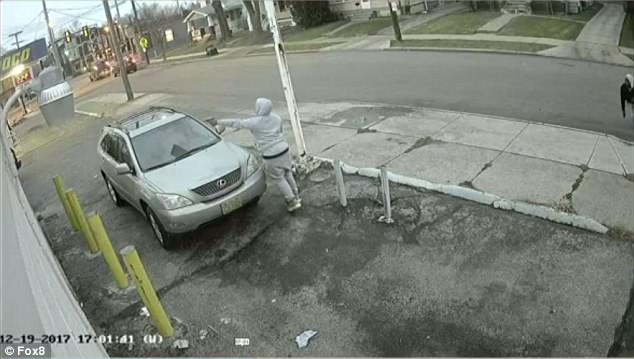 Investigators say the shooting started as an attempted armed robbery 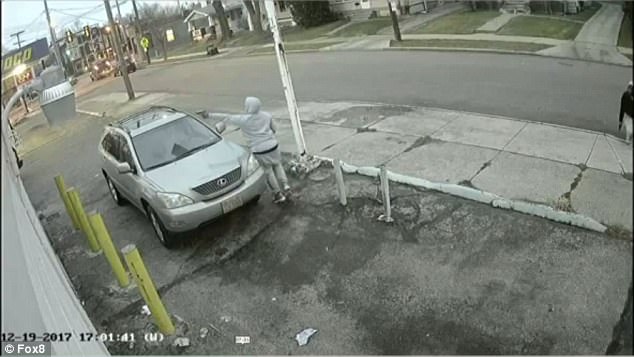 The passenger is hit in the back and the mouth, suffering serious injuries, though he did return fire, striking the 27-year-old gunman in the stomach.

The passenger is then seen getting out of the car and picking up the AK-47. He then fired several shots with his handgun while running from the gas station.

He dropped the AK-47 behind the gas station and kept running, according to Cleveland.com.

He left a trail of blood as he fled to another gas station a block away, according to police.

Investigators say the wounded passenger collapsed inside that gas station with his handgun tucked into the back of his waistband.

He was taken to a local hospital for treatment.

Meanwhile, back at the first gas station where the shootout unfolded, the 30-year-old man pushed the driver of the black SUV to the ground.

The driver managed to escape unharmed. Police are searching for him.

The 18-year-old gunman then ran toward the black SUV, which was abandoned at this point, and apparently looked for something to steal.

After the shooting stopped, the 18-year-old fled the scene on foot. The 30-year-old and the 27-year-old drove off together toward a local hospital to get treatment, police said. 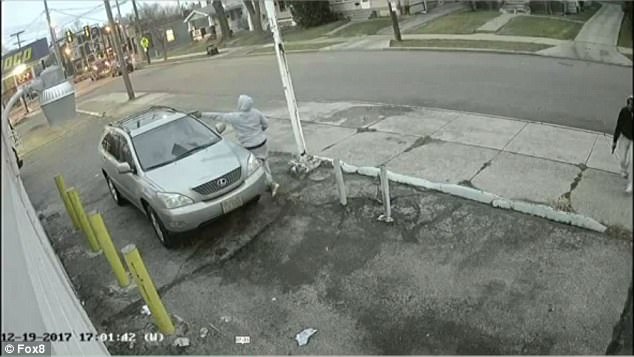 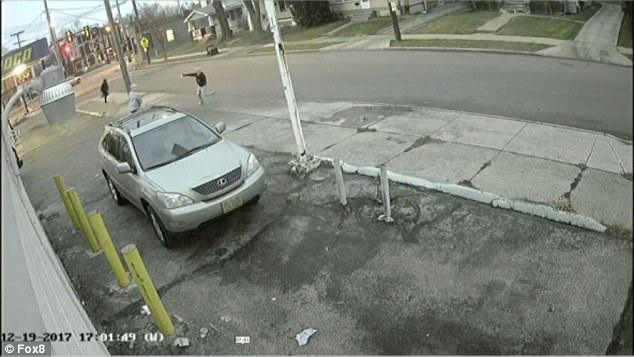 As the shootout ended, the three men are seen fleeing the scene. Police believe two of the men tried to meet up at the home after the shooting

The driver of the SUV eventually returned to his car and sped off.

The girl who was injured had a bullet graze one of her fingers. She is seen in the video getting out of her father’s burgundy car parked just a few feet from the gas station convenience store during a lull in the shooting.

‘It was a miracle she wasn’t killed,’ Cleveland Councilman Mike Polensek said.

‘I told her that her guardian angel must have been watching over her.’

The 18-year-old man who was arrested in the shooting is believed to be associated with a local gang. 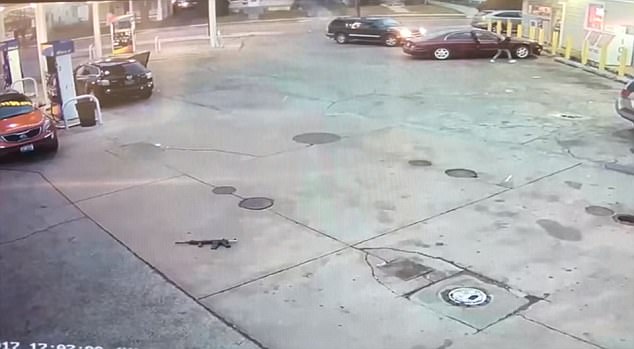 During the shootout, a 7-year-old girl was grazed by a bullet as she was sitting in her father’s burgundy car (top right) 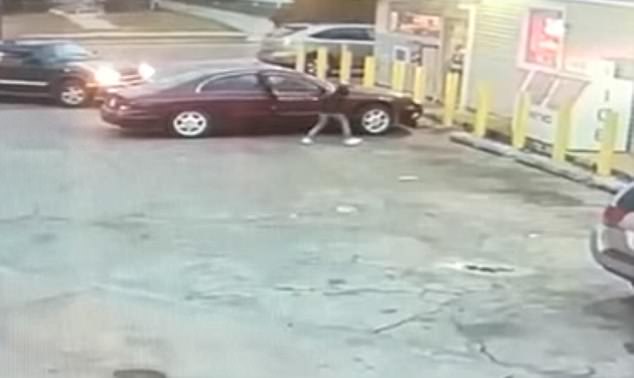 The girl is seen walking out of the car after she was hit by the bullet. A local politician said it was a  ‘miracle’ she wasn’t killed 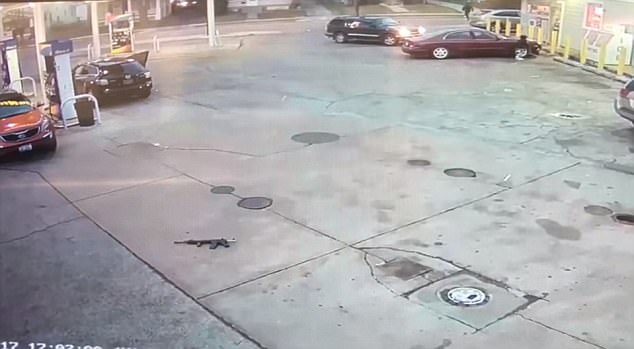 As the wounded girl walked into the convenience store, an AK-47 used in the attempted armed robbery is seen lying on the ground

Police believe the three men met up before the robbery at a nearby home.

The third member of the group drove and parked behind the station, police say.

Minutes after the shootout, an unidentified man who was not involved in the shooting is scene driving into the gas station parking lot and walking away with the AK-47 assault rifle left at the scene.

Meanwhile, police believe that the 18-year-old and the 30-year-old were trying to meet up at the same home where they met before the incident.

Police officers entered the home and arrested the 18-year-old, who was standing outside.

Thinking that the 30-year-old was inside the home, police called for a SWAT team that surrounded the home until 4:30am on Wednesday.

After searching the home, police were unable to locate the 30-year-old, though investigators said they found two guns.

‘I’ve never seen anything like this before, and I’ve been doing this a long time,’ Polensek said of the crime in the Collinwood section of Cleveland.

‘These hoodlums know the police aren’t out there patrolling as much as they used to be.’