The Los Angeles Police Department this afternoon released body camera footage showing a US Marine veteran with his hands raised in the air being shot in the head with a rubber projectile during a Black Lives Matter protest in May.

CJ Montano was taking part in what started as a peaceful protest sparked by the killing of George Floyd on May 30 in the Fairfax district in Los Angeles when he said tensions escalated as officers confronted the marchers.

Montano, 24, previously said he had his hands up and was talking to some of the officers, offering to try and get other protesters to stop throwing rocks and bottles at them, when he was shot with several rubber bullets.

Body camera video released by the LAPD shows Black Lives Matter protester CJ Montano, 24, had his hands raised when he was shot in the head with a rubber bullet on May 30 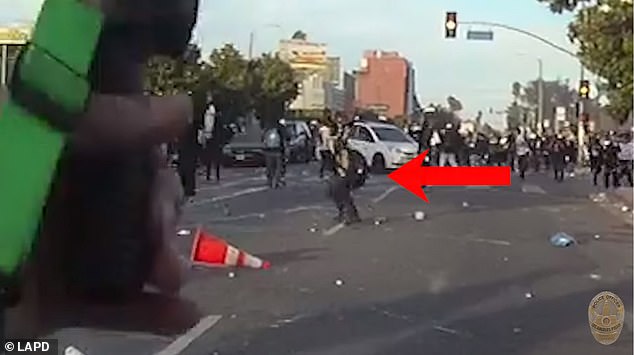 Montano, a US Marine veteran, collapsed to the ground as other protesters fled 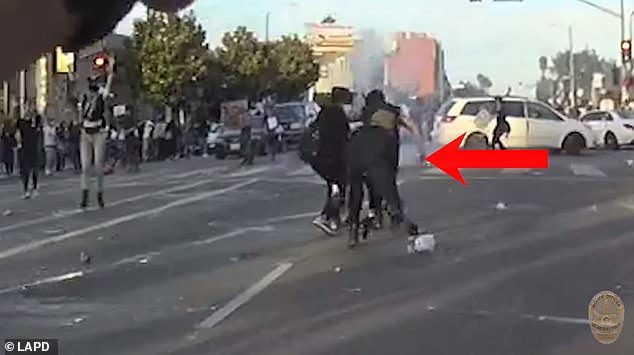 One of the non-lethal projectiles struck Montano in the head and caused severe bleeding, compounded by his being on blood-thinning medications. He was taken to a hospital suffering from serious injuries.

Footage taken from the cameras of officers on the scene show a figure with his hands visibly raised, said to be Montano, standing in the street between police and protesters.

‘Less-lethal up,’ officers in body armor are heard calling out, referring to rubber projectiles.

Montano appears to back away when he is struck and collapses to the ground.

The officers continue shooting on the crowd, sending protesters fleeing. 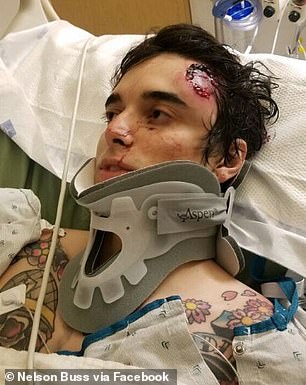 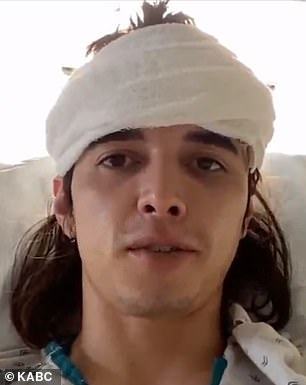 Montano was taken to a hospital with a massive wound on his head (left). He reportedly suffered temporary vision, hearing and memory loss

The video released by the LAPD includes a slowed down and enlarge version of the body camera footage, which clearly shows the US Marine veteran raising his hands, then covering his head on impact and falling to the ground.

‘I fell on the ground and I was trying to cover up the wound and crawl away,’ he told the Ventura County Star. ‘Other protesters ran out and picked me up and dragged me out.’

He was taken to a hospital to be treated for injuries to his head, including bleeding on his brain.

‘I’m not trying to go out there to harm anyone or bring a bad name to police officers,’ Montano, with his head wrapped in bandages, told KABC from his hospital bed days later. ‘But I’m trying to bring good to the people that deserve it.’

An LAPD spokesperson said Montano’s shooting is being investigated by the agency’s Force Investigation Division as ‘categorical use of force – unintentional head strike with an impact device.’ 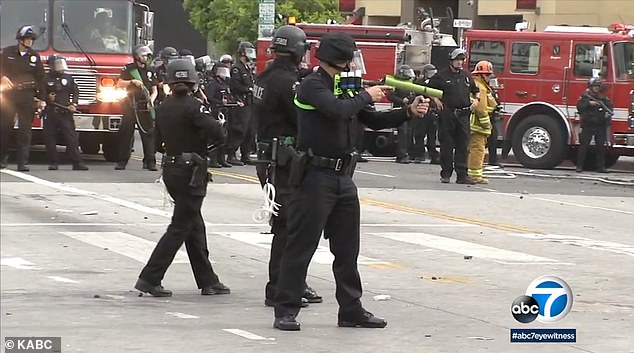 Montano said the protest in the Fairfax district of LA started out peacefully, but the arrival of police officers caused tempters to flare 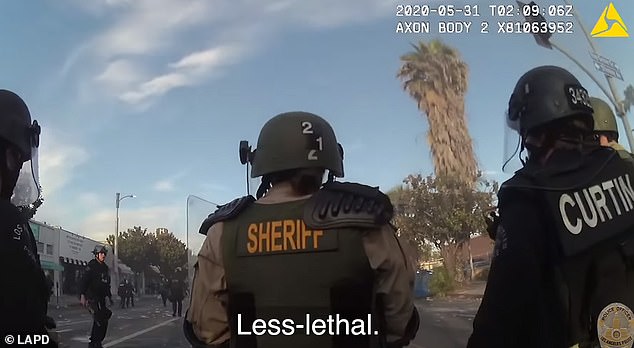 LAPD spokeswoman Capt. Gisselle Espinoza said that over the past two months, investigators have made repeated attempts to interview Montano, ‘but so far he’s refused those attempts.’

Josh Rubenstein, public information director for the LAPD, said that once the investigation into the use of force is complete, its findings will be forwarded to the chief of police, who will in turn make his recommendation to the civilian board of police commissioners.

It will be up to the board to decide whether the officers’ ‘use of force tactics met the high standards expected of all LAPD officers,’ Rubenstein said.

The spokesperson noted that the internal investigation is in its ‘very early stages’ and could take up to a year to complete.