Police in California have released body camera video showing an elderly man being led away in handcuffs following a protest at a waffle eatery in Fresno that opened for dine-in service on Mother’s Day in violation of the city’s stay-at-home order.

Fresno Police Chief Andy Hall said in a statement that accompanied the video that the officer, who was not named, acted within the law and business patrons obstructed him as he carried out his job.

The incident resulted in 73-year-old Tom Miller Sr, described by his family as a Vietnam War veteran with a host of health problems, being detained and placed in the back of a patrol car in handcuffs.

A protest at the Waffle Shop in Fresno, California, on Mother’s Day resulted in a man being taken away in handcuffs by police 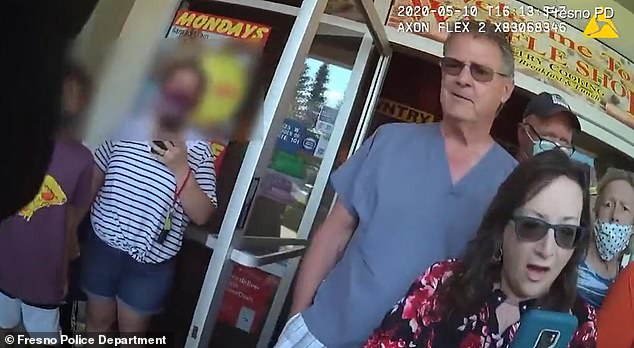 Tom Miller Sr, 73 (pictured in a grey T-shirt) allegedly blocked an officer’s way as he he was assisting Code Enforcers with issuing a citation to the owner of the breakfast restaurant 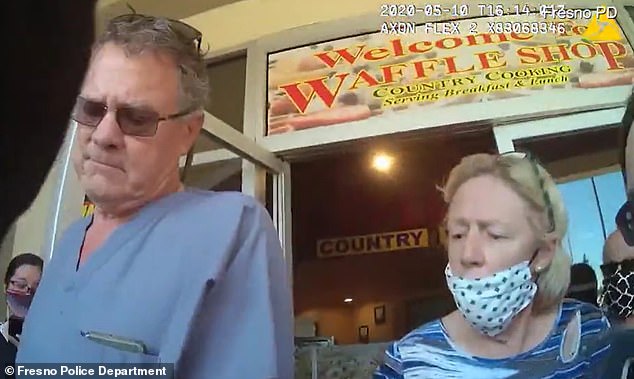 Tom and his wife, Kelly (right), were in a crowd of people supporting the eatery’s decision to welcome diners inside the Waffle Shop, despite the city’s shelter-in-place order 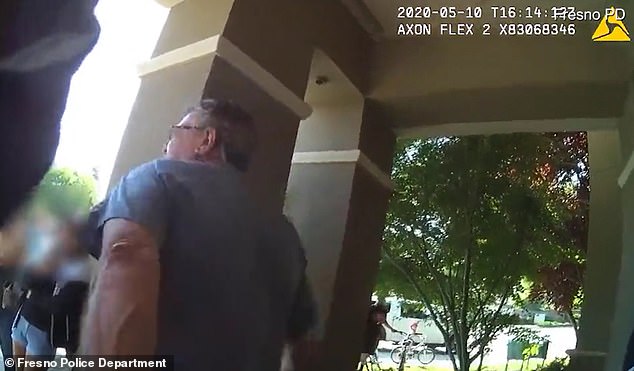 After the responding police officer was allegedly bumped, he placed handcuffs on Miller 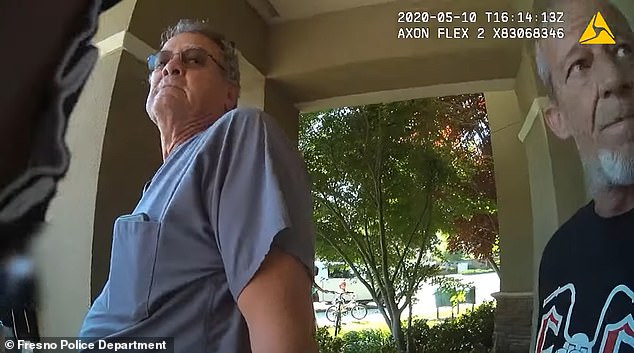 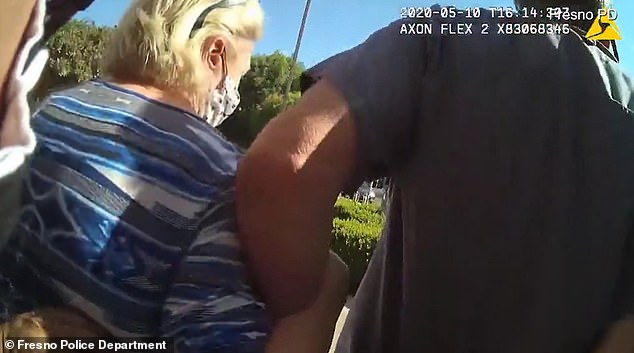 Wife Kelly refused to let go of her husband’s arm, telling the officer that he is a Vietnam veteran suffering from diabetes and heart condition

Miller was ultimately let go without any charges.

The body camera video shows the officer arriving at the Waffle Shop on Figarden Drive at around 8.40am on Sunday to assist City Code Enforcement Officers in issuing a citation to the owner of the breakfast restaurant for allowing diners to eat inside the establishment.

The City of Fresno has a shelter-in-place order in effect, under which restaurants are only allowed to prepare and serve food for delivery or carry-out in an effort to halt the spread of the coronavirus.

The Waffle Shop was slapped with a $1,000 fine last week for violating the emergency order and opening its doors to patrons, after receiving a warning from the city.

On Sunday morning, the breakfast eatery once again welcomed diners in defiance of the shelter-in-place order. 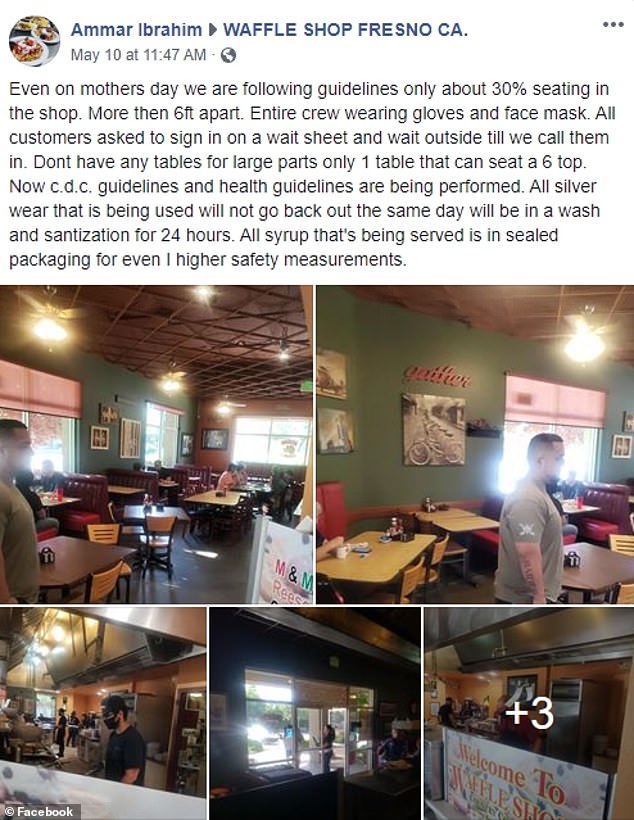 Ammram Ibrahim, the owner of the Waffle Shop, had decided to open his business to dine-in service on Mother’s Day, after receiving a warning and a fine 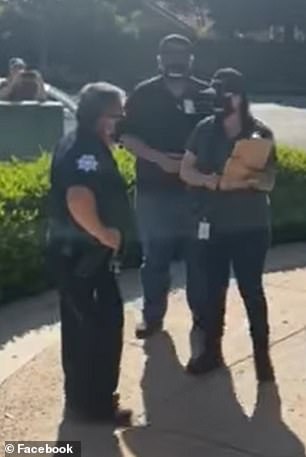 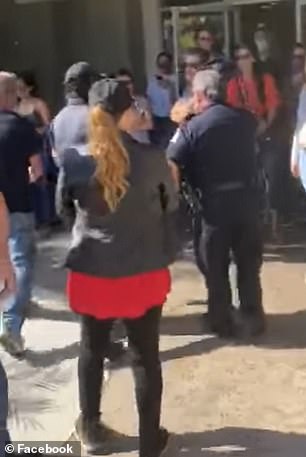 A bystander captured the confrontation between the officer and the crowd on a cellphone camera. After watching that video, the local police chief stated that he was ‘concerned’ 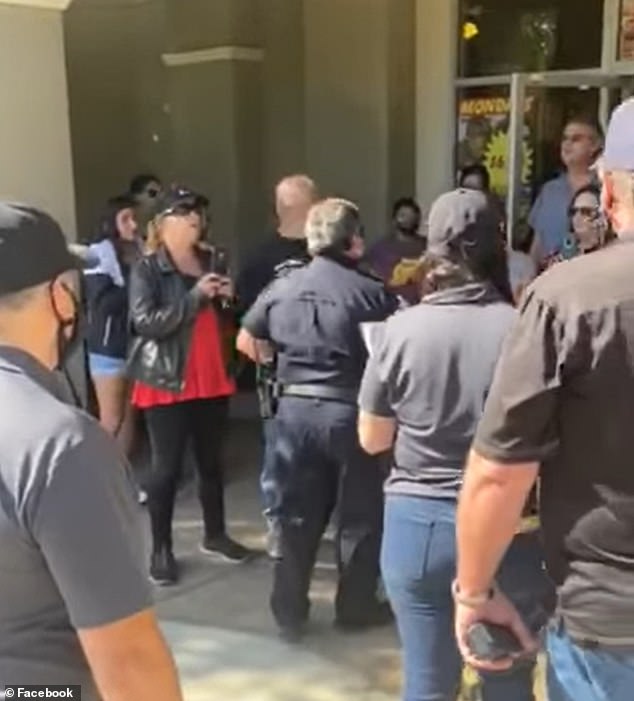 The responding officer is seen in the cellphone video being surrounded by protesters, with Miller in the grey shirt standing in the doorway

Code enforcers promptly arrived on the scene to issue another fine, but were allegedly blocked from entering by a group of angry protesters.

That is when police were summoned to help the city officials, resulting in a confrontation, which was captured on a bystander’s video, as well as on the responding officer’s body camera.

The police footage shows the officer approach the eatery, telling the crowd standing outside blocking the entrance, ‘OK, folks, make a way.’

The crowd reacts with anger, with one woman telling the cop, ‘They don’t have to let you in.’

The officer replies, ‘Do not interfere with my job.’

The officer tries to make his way towards the entrance but is blocked by the people and appears to bump into at least one person.

He then comes face-to-face with Miller, who stands in the doorway next to his wife, Kelly.

He pulls on Miller’s arms and orders him to put his hands behind his back, but the man appears to pull away from the officer.

A few seconds later, the officer restrains Miller’s arms with handcuffs and leads him away toward his patrol vehicle, with the man’s wife clinging to him and refusing to let go.

‘That’s a violation of his civil rights, you stupid bastard,’ a woman shouts in the background. 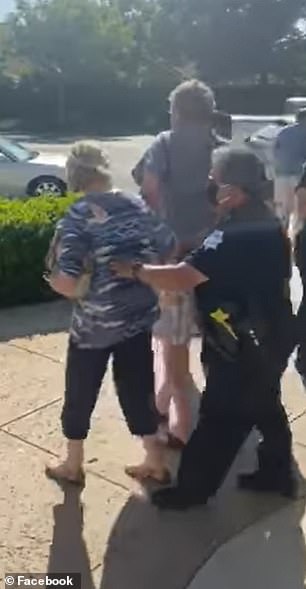 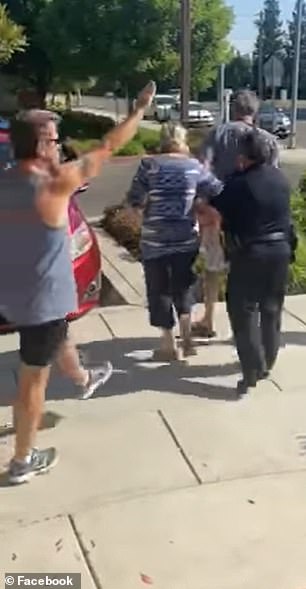 Miller is seen from a different angle being led to the officer’s patrol car, with his wife clinging to his arm. On the right, a bystander appears to mock the police by performing what appears to be the Nazi salute

As the officer approaches his vehicle, he again orders Kelly Miller to let go of her husband’s arm.

‘He has served four tours in Vietnam. He’s a diabetic. He has a heart condition,’ the woman tells the officer as he places Miller in the backseat.

Bystanders could be heard hurling foul-mouthed insults at the officer.

When news of the confrontation first emerged, Chief Hall released a statement saying he reviewed a cellphone video from the scene and was ‘concerned over the manner in which this incident was handled.’

He added that he immediately ordered an Internal Affairs investigation.

In a follow-up statement released on Monday, Hall threw his support behind the responding officer, writing: ‘after a thorough review of this incident, it does appear that the officer was acting lawfully while assisting code enforcement. It also appears that the individual in this case did obstruct the officer in his duties that his detention of this individual allowed for code enforcement to complete their duties. As a result, the individual was only detained and was released without any further charges beings filed.’

Hall prefaced this by explaining that he has ordered his officers to seek voluntary compliance with the shelter-in-place order and make no arrests without his approval.

The chief complained that his department ‘is being placed in the middle of opposing political view points of how the City operates during the COVID-19 pandemic.’

Hall continued, writing that regardless of his or his officers’ personal beliefs, they have a sworn duty to uphold and enforce the laws ‘until a judge rules them to be unconstitutional.’

On Monday, the owner of the Waffle Shop, Ammar Ibrahim, posted on Facebook that he was issued a $5,000 fine over the Mother’s Day violation and will go back to serving carry-out only.