They marked their engagement with a series of formal portraits shot at Buckingham Palace.

But it seems the real fun began after hours for Princess Eugenie and Jack Brooksbank, as the pair were filmed dancing in a bar at their engagement party.

In a video shared online by Instagram user Will Wells, the wine merchant can be seen twirling Prince Andrew’s youngest daughter around the room to the sound of Bruno Mars’ hit Marry You after the day’s formalities were over.

The young couple are still wearing the same outfits they donned for their official portraits and TV interview – a smart blue suit and a £1,800 Erdem dress – in the video, captioned simply ‘Jack & Eug’ alongside a series of kissing emojis.

They can also be seen embracing on the dance floor, while another snap shows them grinning at a table at the private even, surrounded by glasses of wine.

Official portraits: The he couple plumped for a more down-to-earth option in the form of Press Association Jonathan Brady for their engagement photographs, released on Monday

The 27-year-old Princess’s long-term boyfriend Jack, 31, popped the question in Nicaragua earlier this month with the unusual ring; a padparadscha sapphire surrounded by diamonds.

The sparkler bears a striking similarity to the one Eugenie’s mother, Sarah Ferguson, was presented with by her ex-husband Prince Andrew, when they became engaged back in 1986 – although Fergie’s ring was set with a pink Burma ruby.

Eugenie and Jack are now set to exchange vows in the autumn at Windsor Castle – in the same chapel that will play host to Prince Harry and Meghan Markle’s nuptials in May.

But unlike Harry and Meghan, who enlisted celebrity photographer Alexi Lubomirski – who has snapped everyone from Julia Roberts to Angelina Jolie – to take their enagement photos, the couple plumped for a more down-to-earth option in the form of Press Association photographer Jonathan Brady. 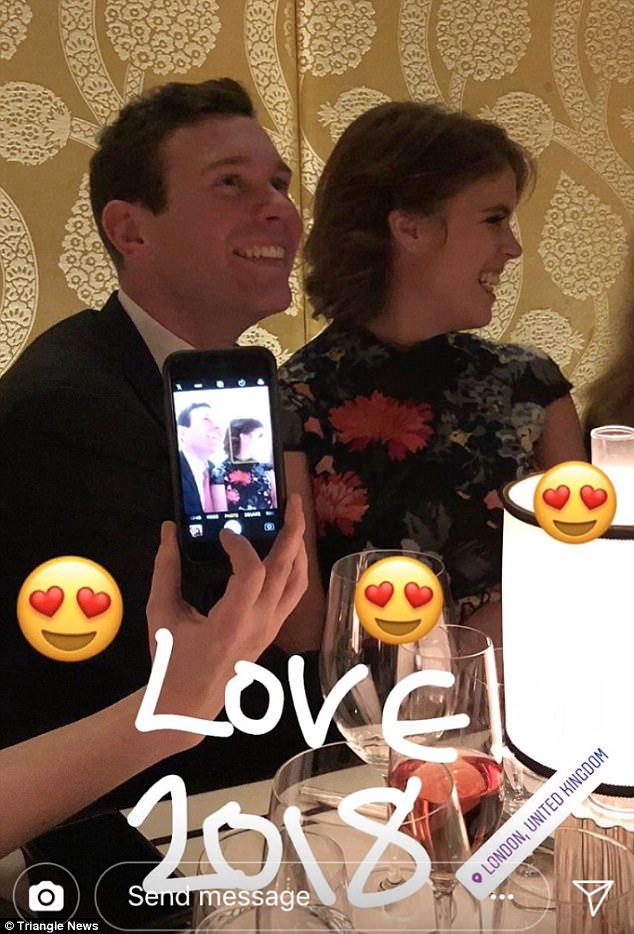 In another snap which appears to have been taken in London, the pair are seen enjoying drinks with friends at a table surrounded by glasses of wine 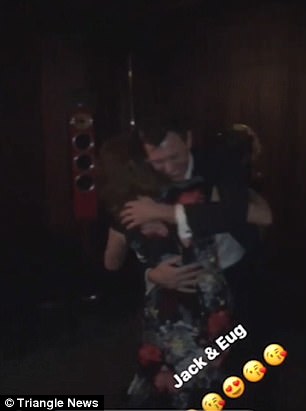 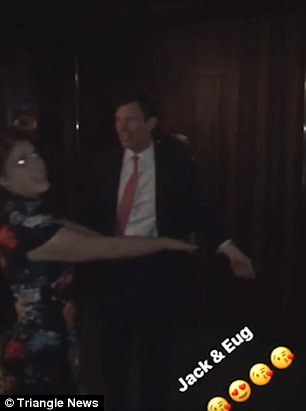 Eugenie showed off her thrifty side by recycling a floral dress by Erdem she previously wore for a photo shoot with Harper’s Bazaar in 2016, teamed with Jimmy Choo shoes.

her delight with the public in three tweets, which were retweeted by the Duke of York.