Comedian Tom Arnold recorded an hour-long encounter with two Secret Service agents that took place in the living room of his home, where the agents had come to interview him about his tweets that were threatening President Donald Trump.

In October, in response to Trump praising Montana Rep. Greg Gianforte for once body-slamming a reporter, Arnold tweeted: ‘I say put up or shut up @realDonaldTrump Me vs You. For America. First body slam wins. Any Rally. Any Time. Between now & the midterms. #FridayFeeling.’

Agents visited his home on October 25, as they were hunting for the person who sent mail bombs to the president’s political rivals, to ask him about his tweets. 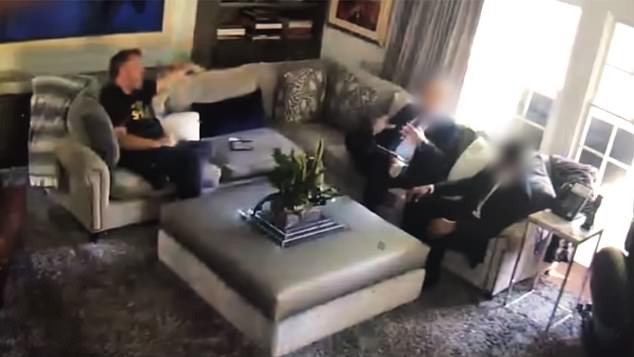 Arnold recorded the incident and shared the video with Mother Jones, telling the magazine the agents, who were not named by the publication, knew they were being recorded via his security camera.

In the encounter, the agents assure Arnold he is not being singled out.

‘We go out on any and all tweets and Facebook posts or any type of threat,’ one said. ‘We don’t just focus on – it doesn’t matter if you have 100 followers on Facebook or 500,000 followers…We have to do our due diligence.’

The actor, who shot to fame during his marriage to Roseann Barr, was asked a series of questions: Did he have any plans to attend a Trump rally? (no, he said) Not even for publicity? (no) Did he have plans to fly to Washington to confront the president? (no) When was the last time he fired a gun? (for a film) Did he know how to make IEDs? (No.) If he saw Trump, would he have an ‘impulse…to swing at him?’ (‘I’m not a crazy person.’)

Arnold has become a bete noir to the president and has claimed – although not yet given evidence – of seeing outtakes of Trump’s old NBC show ‘The Apprentice,’ where Trump allegedly uses a racial slur.

Arnold told agents he recognized they were just doing their jobs and answered them politely, telling them he had known Trump for years – they used to hang out at the Playboy Mansion together – but he had broke with his friend when Trump started pushing a conspiracy theory that then-President Barack Obama was not born in the United States.

One of the agents told Arnold they were not as much concerned that the actor would do something, but that his posts would incite others to agent in violence.

The agent said: ‘We’re not the First Amendment police… You’re free to say whatever you want to say within certain boundaries… In your type of case, what we’re concerned with a lot, too, is the audience it can reach, that it could incite somebody to do something.’

‘You see a lot of times when we’ve had previous attempts on the president’s life, they got motivated by somebody… So that’s the worry,’ the agent noted.

Arnold, who has 250,000 followers on Twitter, told the agents he would ‘stay away’ from tweets and statements that could be misinterpreted.

But after Cesar Sayoc, the suspected pipe bomber who mailed incendiary devices to Trump’s political rivals – turned out to be a supporter of the president, Arnold wondered if anyone in the Secret Service ever gave Trump the same talk.

‘After all,’ Arnold told Mother Jones, ‘he needs it far more than me.’ 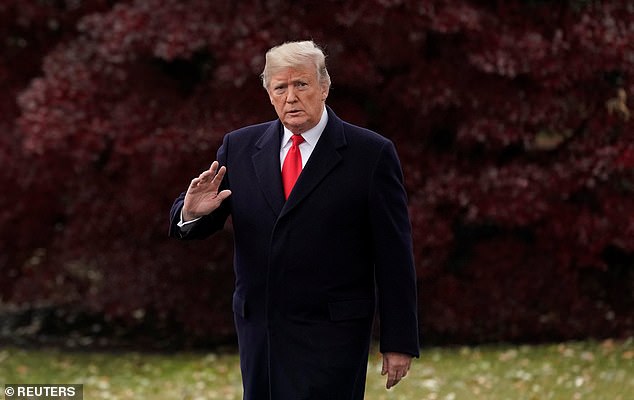 Arnold said he and President Trump go back years 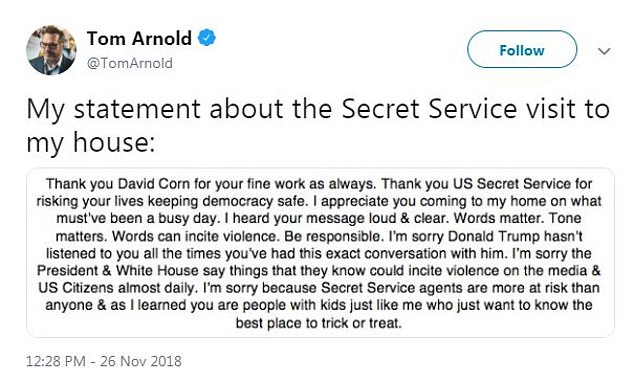 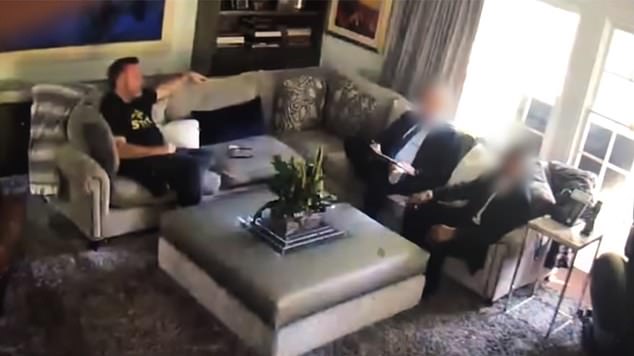 Arnold posted a statement on Twitter Monday about the visit to his home.

‘Thank you US Secret Service for risking your lives keeping democracy safe. I appreciate you coming to my home on what must have been a busy day. I heard your message loud & clear. Words matter. Tone matters. Words can incite violence. Be responsible. I’m sorry Donald Trump hasn’t listened to you all the times you’ve had this exact conversation with him. I’m sorry the president & White House say things that they know could incite violence on the media & U.S. citizens almost daily. I’m sorry because Secret Service agents are more at risk than anyone & as I learned you are people with kids just like me who just want to know the best place to trick or treat,’ he wrote.