Vienna’s Christmas markets will sweep you off your feet

This is one of Europe’s great cultural capitals that still trades off its imperial past. The great hero Emperor Franz Joseph I (1848-1916) left Vienna looking suitably regal — and it remains pretty much unchanged.

The city’s ups and downs since World War I add a thrilling historical backdrop, with its proud residents far keener to talk about Mozart’s years here than Hitler’s.

NOW’S THE TIME Spring and autumn are popular (avoid July and August) but there’s a lot to be said for going in the run-up to Christmas when there are more than 20 twinkling markets, with more than 1,000 festive stalls, plus the Christmas in Vienna concert season which starts on December 17.

ORDER, ORDER! This is absolutely not a stag-night sort of place. The streets are clean, the people polite — and the public transport system seems to work on trust. No one checks your ticket, but everyone buys one.

Throw in the superlative art, opera and architecture and you’re looking at glorious long weekend territory — although you will only scratch the surface. 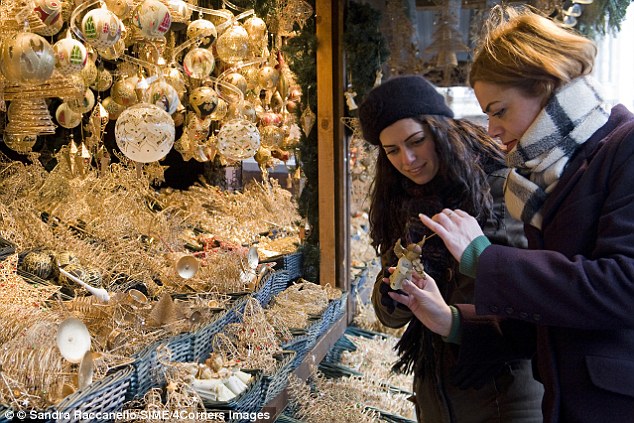 Twinkling: More than 1,000 festive stalls pop up across Vienna in the run-up to Christmas

ESSENTIAL ART You get two for the price of one when it comes to the art — because it is exhibited in magnificent palaces worthy of the admission price on their own.

The Belvedere — two Baroque mansions facing each other across a sloping formal garden — is where you’ll find Gustav Klimt show-stoppers, including The Kiss, while the Kunsthistorisches Museum contains the fourth largest collection of paintings in the world.

Work began on the current building in 1304 and since then it has brushed off two Turkish sieges, Napoleonic bombardment and the full might of American bombers and Russian artillery towards the end of World War II.

Karlskirche is regarded as Vienna’s finest Baroque church, but if you want something more manageable, yet just as elaborate, then St Anne’s Church in Annagasse is perfect and you’ll probably have it all to yourself.

MUSIC FOR THE SOUL Spoilt for choice, of course. Check first for tickets at the Vienna State Opera house (Staatsoper), a glorious building that reflects the grandeur of the Habsburg era; the Vienna Boys’ Choir performs every Sunday during mass at the Hofburgkapelle and you’ll be bombarded by smartly dressed salesmen offering you tickets to Strauss and Mozart concerts in venues all over the city.

TEA AND CAKE Why Austrians aren’t the fattest people on earth is a mystery.

They eat vast quantities of bread and dumplings and their cafe culture includes wolfing down cakes of all shapes and sizes. 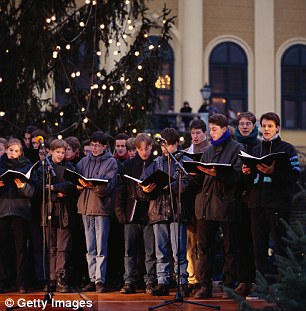 On song: A choir in Vienna at Christmas time

You won’t go far wrong at Demel on the Kohlmarkt shopping street or Justizcafe on the roof of the Palace of Justice.

HORSING AROUND Last year, the Spanish Riding School celebrated its 450th anniversary — and now it has its first female rider. There are guided tours of the stables and at weekends the Lipizzan horses perform in the winter ring at the Imperial Palace. Do the tour, but the actual show can be laboured for those who aren’t in love with all things horsey.

DINNER IS SERVED Oswald und Kalb (oswaldundkalb.at) on Backerstrasse serves the best wiener schnitzel in town — and its traditional boiled meat isn’t bad either. Family run and unpretentious, this is a great introduction to Austrian cuisine.

Zu den drei Hacken, on Singerstrasse, is meant to be the oldest restaurant in Vienna. You’ll eat spectacularly well and the local wines are exquisite.

Huth on Schellinggasse is a more modern brasserie and also comes highly recommended.

BAG A BARGAIN On Saturday mornings, the Naschmarkt flea market should not be missed.

One end is devoted to food from around the world, the other to antiques, bric-a-brac and junk. Vendors make up the prices as they go along and it’s a great chance to experience Vienna’s multicultural communities, many of whom don’t speak a word of English. 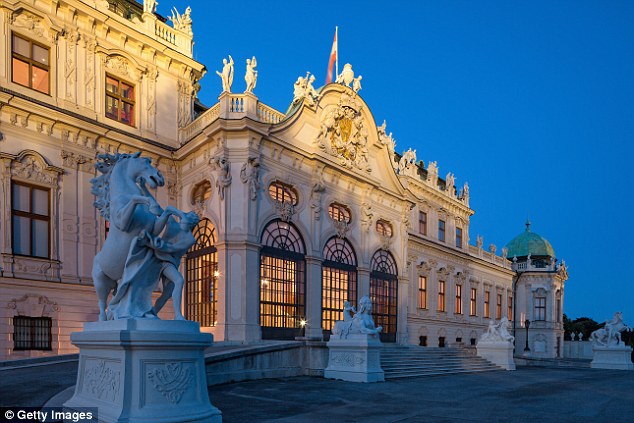 Masterpieces: The Belvedere displays Gustav Klimt show-stoppers, including The Kiss

WHERE TO STAY There are cheaper hotels than the Ritz-Carlton, but you won’t find better service or greater comfort. Made up of four former palaces and within easy walking distance of everything the city has to offer, this is an ideal base.

There’s a spa and indoor pool; rooftop bar, superb restaurant (the Sunday brunch is legendary) and atmospheric bar where smoking is not just allowed but positively encouraged (the ban in Austria does not come in until 2018). The Ritz-Carlton (ritzcarlton.com, 0043 1 31188) has doubles from £250.

A WORD OF ADVICE Hire a guide from the tourist office and make sure he or she takes you on a tram. When the little man is red, do NOT cross the road — Austrians take a dim view of such lawlessness. Wrap up warm, the wind bites as it blows along the Ringstrasse.

Travel Facts: Plan your own weekend in Vienna

Easyjet (easyjet.com) flies from Gatwick to Vienna from £67 return.