Man killed ‘by Hannibal Lecter fan who bashed in victim’s head with a hammer’ was found to have had his LIVER removed, German court hears as trial begins

Nhat T. reportedly confessed to brutally murdering a fellow student at a university in Germany by smashing him with a hammer and hacking his body to pieces

The trial of a ‘Hannibal Lecter’ fan who reportedly confessed to smashing a fellow student’s head in with a hammer, before hacking the body to pieces, has begun in Germany.

When the body was found, chopped up and stuffed into plastic bags, the victim’s liver had been removed with a sharp instrument and is now missing.

The victim’s head was found under a bridge.

Lawyer Christian Stuenkel, who represents the family of the victim, said: ‘Hannibal Lecter was the biggest idol of the accused.

‘He watched all the films and series again and again.’

The suspect, who was only identified as 24-year-old Vietnamese student Nhat T., has appeared for the first time in the district court of Gera in the German state of Thuringia.

Nhat T. was found to have searched ‘Hannibal Lecter’, ‘secure killing methods’ and ‘psychological illnesses’ around 30,000 times on the internet before the murder.

Like his hero Hannibal Lecter, the main character in the series of novels written by Thomas Harris and which have become very successful films, Nhat T. was handcuffed as he was led into the courtroom.

Lacking Lecter’s trademark face mask which covers his mouth and nose, Nhat T. hid his face in his hoodie.

In August 2018, the Vietnamese student, who attended university in the central German city of Jena, gave himself up to the cops and reportedly admitted to killing his 27-year-old Chinese classmate Chenxi L. on August 24 last year. 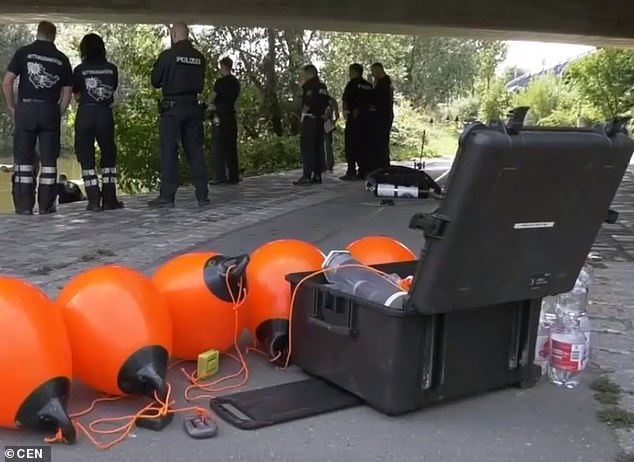 Divers found some of the victim’s body parts in the River Saale. The victim’s head was found under a bridge 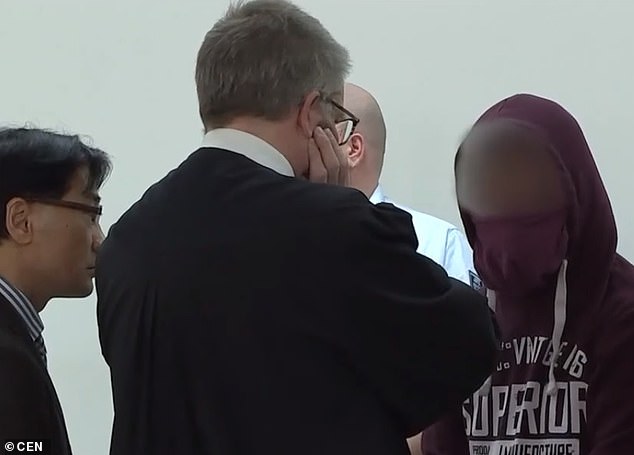 Prosecutors believe that Nhat T. may be suffering from schizophrenia and a mental assessment by a court psychologist has been ordered to find out more about the Vietnamese student’s state of mind

According to the prosecutors, Nhat T. lured Chenxi L. into his student flat by telling him that a package had arrived for him, turning up the music volume and striking him with a hammer.

He then allegedly chopped his body to pieces in the bath and stuffed them into plastic bags.

During the trial, the court hopes to find out what Nhat T. exactly did with the body of Chenxi L. after he allegedly smashed his head in with a hammer.

Some body parts were found by a special diving team in the River Saale while the victim’s head was found under a bridge.

Prosecutor Martin Zschaechner confirmed that the victim’s liver was missing from its body and an autopsy showed signs of it being removed by a sharp instrument like a knife.

As the liver was never found, prosecutors believe the suspect might have eaten it given his great fondness of his hero Hannibal Lecter. 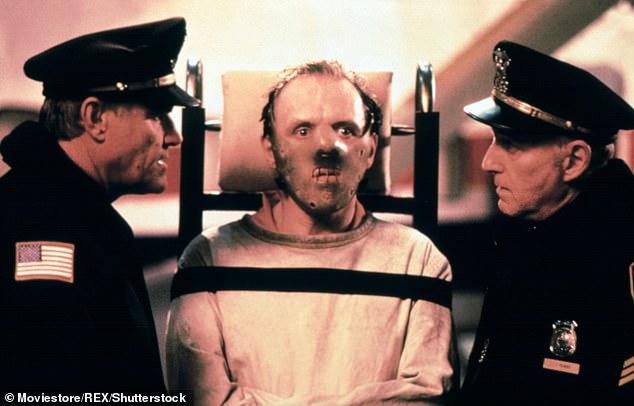 Nhat is said to have idolised notorious cannibal character, Hannibal Lecter, and was found to have searched ‘Hannibal Lecter’, ‘secure killing methods’ and ‘psychological illnesses’ around 30,000 times on the internet before the murder

‘The liver was selectively removed [from the body].’

The prosecutor may have been referring to the 1991 ‘The Silence of the Lambs’ film, when the infamous cannibal psychiatrist says his famous line: ‘I ate his liver with some fava beans and a nice chianti.’

A mental assessment by a court psychologist has been ordered to find out more about the Vietnamese student’s state of mind.

Before the murder inside student housing accommodation in Jena, the suspect allegedly watched ‘The Silence of the Lambs’ several times and the sequel ‘Hannibal’.

Investigators also suspect that the student acted out of greed as he stole the victim’s computer and mobile phone and ordered expensive goods on the internet using his money.

The trial is ongoing.