Viewers were left ‘terrified’ after seeing footage of a man who found himself trapped in the belly of an escalator in channel 5’s ‘Eaten by an Escalator.’

In last night’s episode, the documentary looked at the horrifying moments the everyday machines have caused chaos by spiralling out of control.

In one clip shown of a busy metro station in Istanbul, Turkey, commuters are using a static escalator like a normal staircase when suddenly, it springs into life, just as someone steps into a huge gaping hole that unexpectedly opens beneath his feet.

The man desperately tries to hold onto the handrail but eventually, plummets into the mechanism and the stairs close over him.

An hour later he is freed and taken to hospital with minor injuries, but those who tuned in were shocked after seeing the clip.

‘No one will ever go on another escalator again after watching this programme,’ wrote one, while another penned: ‘This is enough to make everyone take the stairs in future.’

Footage showed a man from Istanbul, Turkey, getting swallowed alive as a hole unexpectedly opened beneath him in last night’s episode of channel 5’s Eaten by an Escalator: When Machines Bite Back 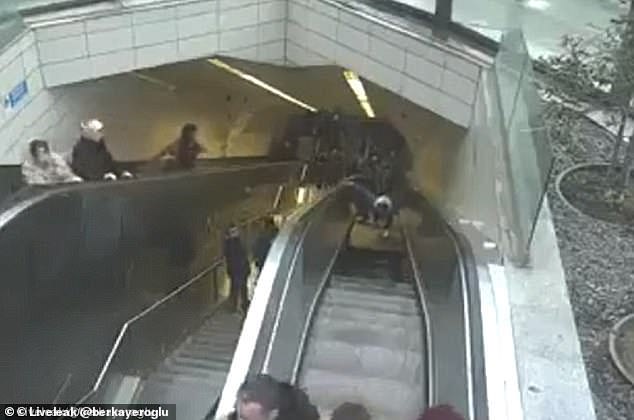 Viewers were left in shock after seeing the clip, with one declaring ‘this is all my fears rolled into one.’ Pictured, the video footage

Many viewers agreed that after watching the documentary. they will be taking the stairs in the future

‘Never wanting to take an escalator ever again,’ joked another, while a further added: ‘This is terrifying me.’

Istanbul Metropolitan Municipality had reportedly put up a warning sign near the broken escalator before the accident occurred – but it failed to prevent people from using it.

In further footage, husband and wife Leslie and John Tufarolo had attended a rally in Washington DC when they boarded the escalator at L’Enfant Plaza Metro Station.

Suddenly there was a loud noise and the escalator started to speed up, throwing people off as it accelerated forwards.

A terrified Leslie was slammed to the ground and trapped behind a barrage of bodies before being helped up by John.

‘We probably got a good half way down and it was crowded, and we heard this funny noise, like a metallic clicking sound – and then it just let go,’ explained John. ‘It kept getting faster and faster, you could see people stacking up at the bottom.

‘At some point I was at the front and got thrown off the side and ended up tumbling on the ground.’

The cause was later determined to be brake failure due to the weight and unusually large number of passengers aboard the escalator at one time. Thankfully no-one was seriously injured.

And viewers were quick to take to social media to express their concerns about using escalators in the future. 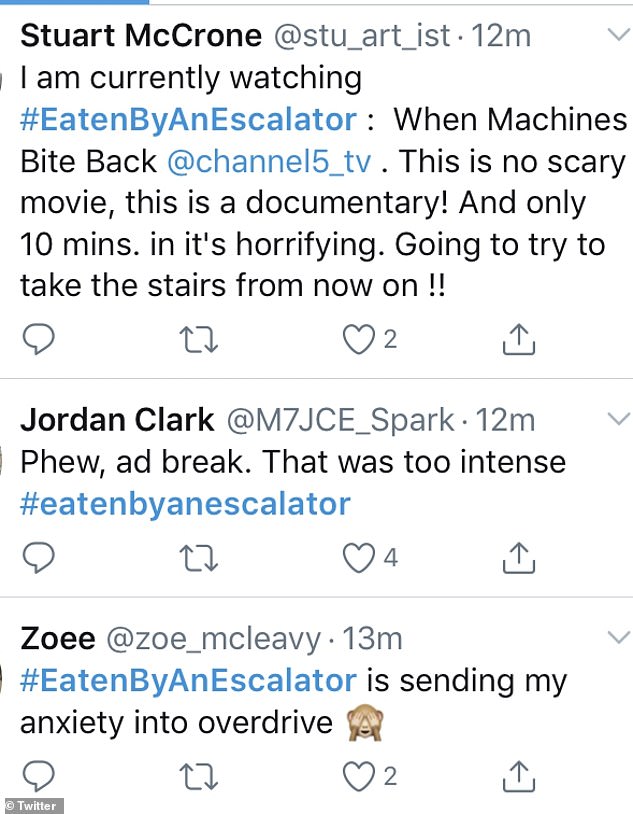 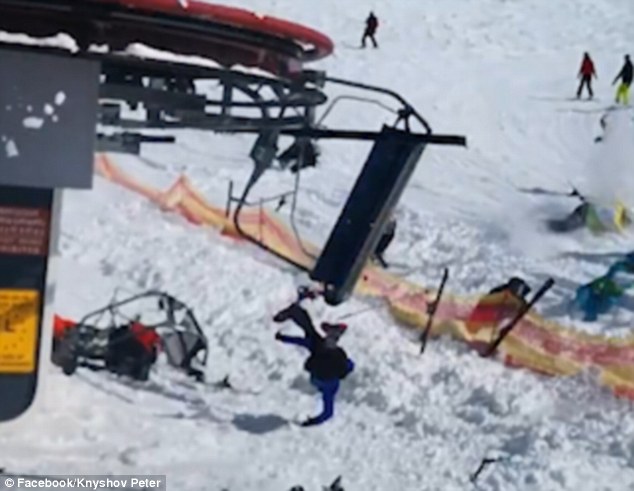 The documentary also features ex lift operator Ed, who witnessed a malfunctioning lift – operating much faster than normal – which sent skiers flying in all directions

‘This is why we tell kids to have their laces tied up properly when we use the underground on school trips,’ wrote one, while a second commented:

‘I am meant to be going to London for a day out tomorrow. Think I’ll take the stairs!’

A third added: ‘I hate lifts they are absolutely one of my irrational fears where they just fall straight down. I never hated escalators but this is WILD,’ while a further declared it was all their ‘fears rolled into one.’

The documentary also featured ex lift operator Ed, who witnessed a truly terrifying incident at a ski resort in Georgia back in March 2018.

Whilst he and his friends queued at the bottom for a ski lift, it suddenly juddered and then moved into reverse. Ed heard the auxiliary engine cut in as the lift began to pick up speed.

The people in the chairs were catapulted backwards and thrown into the ground, and many more chose to jump from their seats.

‘The speed was picking up, they were getting a lot faster and people weren’t able to jump off in time,’ explained Ed.

‘People were going flying, there was no control, the chairs were going backwards and they started to get caught inside the station. There was a big pile up with people underneath. It was a pretty scary thing to witness.

‘At that point we didn’t know if there were survivors, injuries…it was chaos.’

He added: ‘All the people around were in disarray, shouting, screaming and crying. We did see people knocked out cold underneath the massive wreckage.’

There were minor injuries and a few people airlifted to hospital but shockingly, and luckily, as far as I’m aware, everyone survived.’ 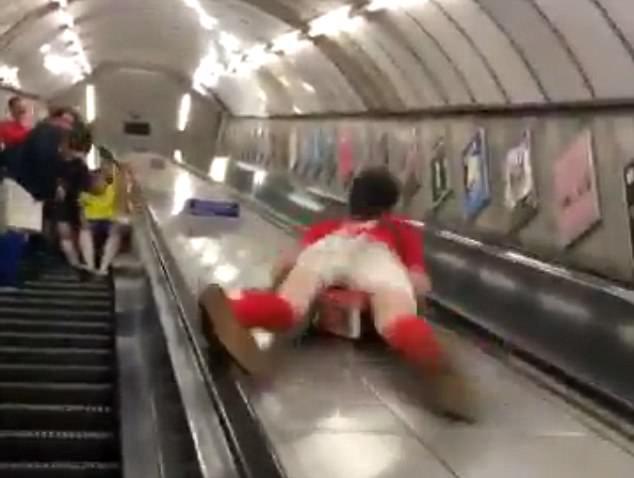 Freddie, 22, from Tonbridge, Kent, took a sore one between the legs at the start of the video, as his mate cried with laughter 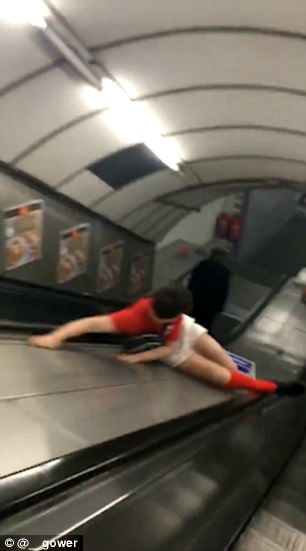 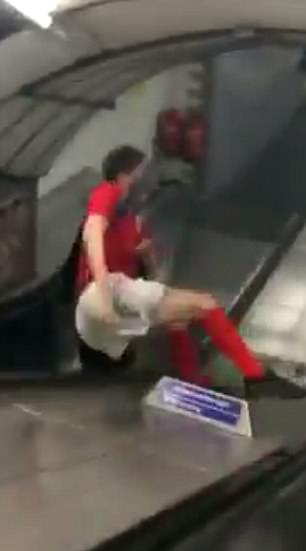 As he gathers pace, he smashes his private parts into one of the emergency stop button, as his friends cry with laughter

Another incident showed footage of Freddie, whose decision to slide down a Tube escalator backfired in spectacular style.

The 22-year-old from Tonbridge, Kent leapt onto the metal chute between two escalators as a prank at London Bridge.

‘I was drunk, wasn’t thinking straight and was in a jokey mood,’ he explained. ‘I’ve always wanted to do it to be honest. You see like a long slide and you think “that’s fun” – that’s just a bigger slide isn’t it.’

But it quickly went wrong as he first smashed his private parts into one of the emergency stop buttons, while his friends looked on horrified.

‘I caught myself on the first box,’ he said. ‘When I hit it I tried to get off but it turned me around. I put both hands out and something so sharp threw my hands.

‘It hurt more to try and stop myself than it did going down the escalator – and that’s when I went straight forward and bounced like a diver.’

‘When I did do a flip, I really hoped I’d land it well, but I banged my head on the escalator.

Freddie slid a further 40ft and then was catapulted into the path of an oncoming commuter. He instantly regretted the stunt and warns people against similar antics.

Eaten by an Escalator: When Machines Bite Back airs Monday, 12th August at 10pm on Channel 5