Viewers rave over ‘suffocating’ Channel 4 drama I Am Nicola

Viewers have been left in tears over Channel 4’s new drama I Am Nicola, with many praising lead actress Vicky McClure for her ‘raw’ and ‘real’ performance.

The partly-improvised series struck a nerve with many viewers who felt they could empathise with Vicky’s character Nicola, who is in a coercive relationship with her boyfriend Adam, played by Perry Fitzpatrick.

The Nottingham native said earlier this month that she hopes the three-part series, written and directed by Dominic Savage, will give women the strength to leave toxic situations.

Viewers were struck by the programme last night, with one posting on Twitter:”#IAmNicola just feels suffocating to watch. Great performance from @Vicky_McClure’

Viewers were left stunned after watching the Channel 4 drama starring Vicky McClure and Perry Fizpatrick, with many calling for them to be awarded for their performances

Another shared: ‘Superbly acted by them both. Can’t help thinking about all those watching this thinking “this is me”.’

The programme followed hairdresser Nicola who is stuck in a controlling and toxic relationship with partner Adam.

Viewers watched as he told her what to wear, accused her of cheating on him with little evidence and shouted at her in front of her friends.

Many said they were struck by the ‘realness’ of the programme, which is the first in three part drama series. 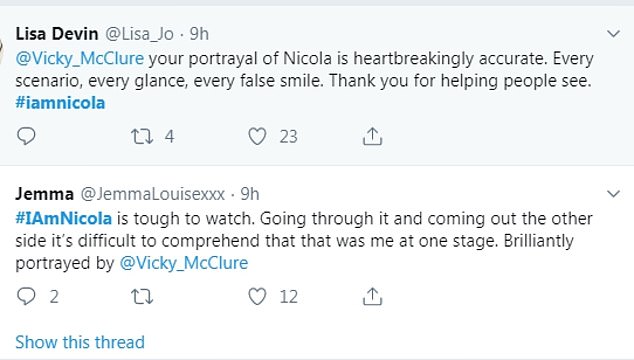 Viewers flooded Twitter with praise for the first programme in the three part drama, with many posting that they empathized with the main character Nicola

‘Just watched #IAmNicola on catch up,’ one tweeted,’Tough and emotional watch but important. Vicky McClure is incredible, as is Perry Fitzpatrick who plays her partner. Amazing acting. The fact that it was all improvised is absolutely brilliant.’

One commented: ‘Reckon both men and women will be able to relate to #IAmNicola even if you’re in denial take a step back and realise #coercivebehaviour is not right either way. If you are the victim or the person acting it out….get help now.’

‘#IAmNicola is tough to watch,’ another posted,’Going through it and coming out the other side is difficult to comprehend that that was me at one stage. Brilliantly portrayed by @Vicky_McClure.’

One commented:’This actress is amazing and real. Breath of fresh air and highlights something in this that is personal to me.’ 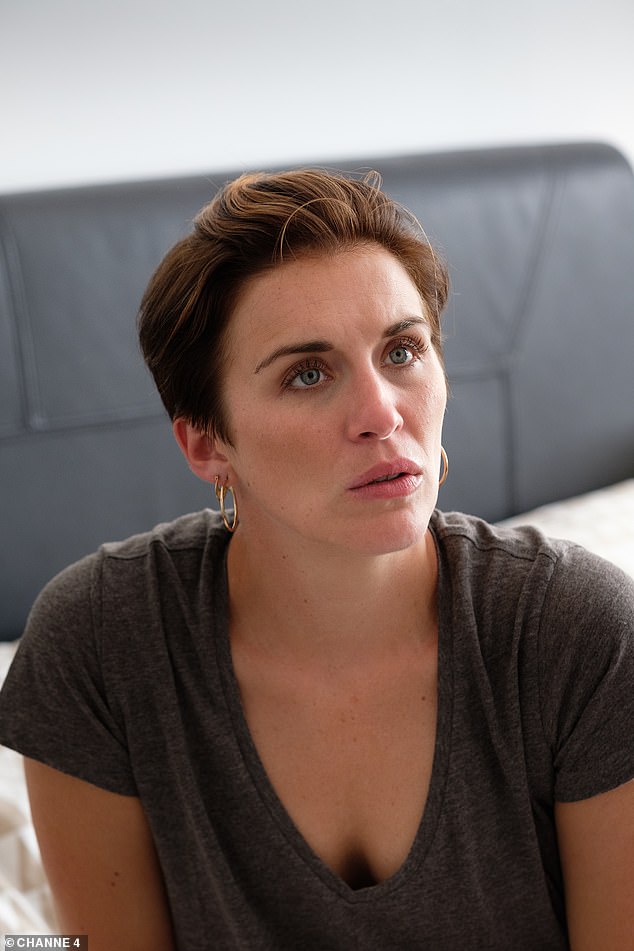 Vicky stars in the Channel 4 drama as Nicola, who is stuck in a coercive relationship with her partner Adam 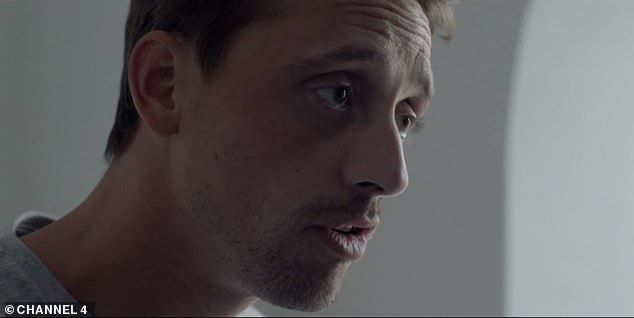 Viewers were struck by Perry Fitzpatrick’s performance as controlling boyfriend Adam, who told his girlfriend what to wear and accused her of cheating on him

‘All the awards for Vicky McClure and Perry Fitzpatrick please!!’ another posted,’ Both performances were absolutely incredible wow.’

‘@Vicky_McClure your portrayal of Nicola is heartbreakingly accurate. Every scenario, every glance, every false smile. Thank you for helping people see,’ one tweeted.

Another said:’I was in a controlling, mentally abusive relationship. This is bringing back so many horrible memories.’

‘Quite hard to watch. Was in an identical situation, and it may be over 25 years ago since I walked but it kind of stays with you. The suicide threats were always the worst. The ultimate guilt trip.’

Vicky previously revealed that she drew upon a former ‘controlling’ relationship filled with ‘jealousy’ for her latest acting role. 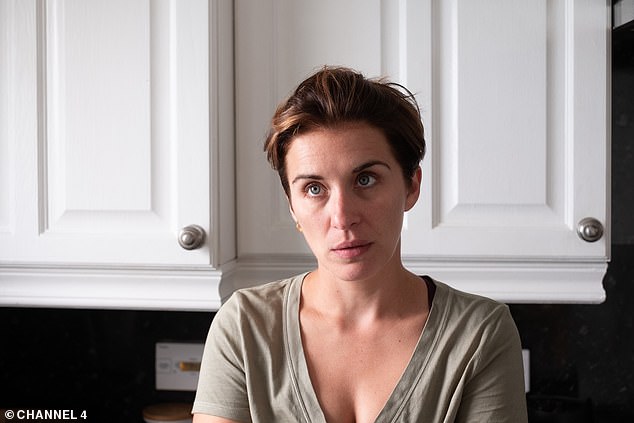 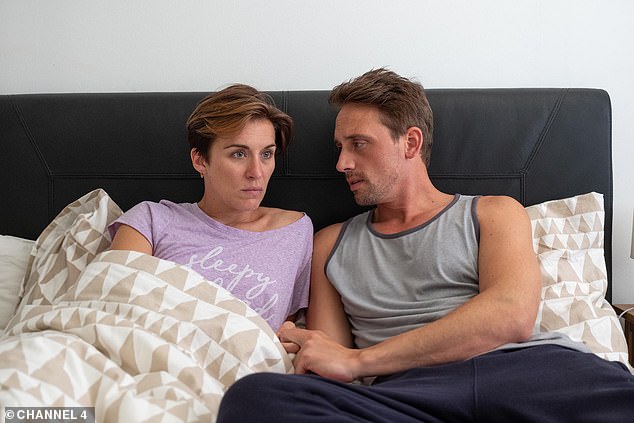 Speaking to The Mirror, Vicky, who is now happily engaged to Jonny Owen, shared how the storyline had parallels to one of her previous relationships.

The BAFTA award-winning actress said: ‘It’s not a carbon copy of my life but it’s something I’ve experienced in relationships, where there’s been issues with trust or jealousy, feeling controlled. It’s a mixture of what I’ve heard from friends.’

Speaking about how the partly improvised TV show could have a positive impact, she shared: ‘I’d love to think someone would watch it and afterwards think, “I know I’m not happy, there’s versions of that I’m experiencing”.

Vicky added: ‘Maybe we can help through telly. A lot of people get therapy through TV.’