Channel 4 viewers were not impressed by a millionaire looking to buy an expensive home in London on last night’s Britain’s Most Expensive Houses.

Karl Chu, a London-based luxury shoe maker, called on estate agent Paulina, at Sotheby’s, to find him his dream bachelor pad, with his eyes set on Mayfair.

In last night’s show Karl visited three apartments priced between £6.75million and £11million, eventually deciding to make an offer on the most expensive property, even though it was located in Ovington Square and not Mayfair, because it had a ‘winter terrace’.

But the wealthy man was not afraid to make his demands known, and complained the first apartment’s hallways were too ‘straight’ and that the lights were ‘too light.’

The 4,700 sq ft flat, which boasts six bedrooms and four bathrooms, also includes four reception rooms and spa facilities, but viewers were put off by the dark decor and said it looked like somewhere you’d go ‘to have a dental treatment.’

And people found Karl, who said he loves smoking cigars and makes shoes out of crocodile skin, ‘dreadful’ and said they felt sorry for Paulina.

Karl Chu, pictured, a London-based luxury shoe maker, called on estate agent Paulina to find him his dream bachelor pad, with his eyes set on Mayfair on last night’s Britain’s Most Expensive Houses 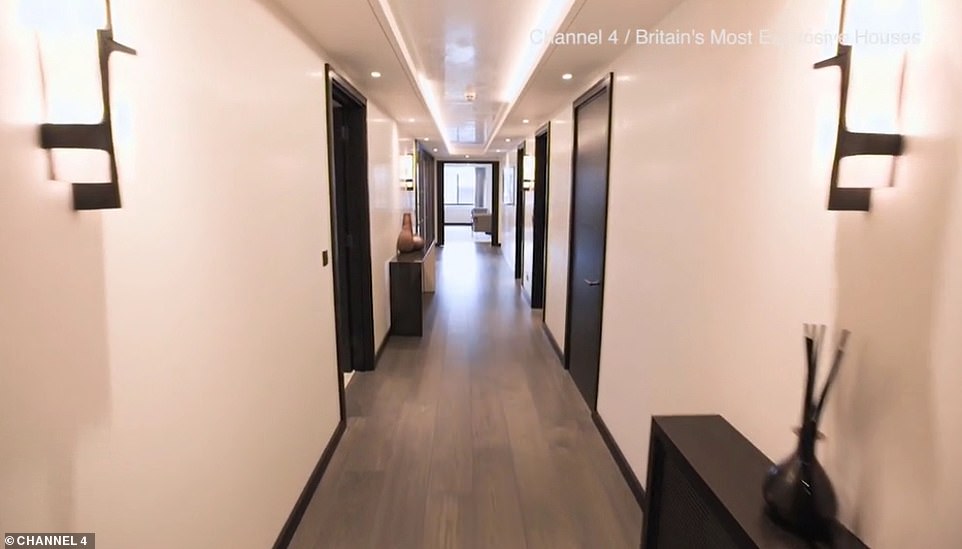 Karl was not convinced by the ‘straight’ and bright hallway of the first apartment he visited, which he said was not ‘cosy’ or ‘welcoming’ enough 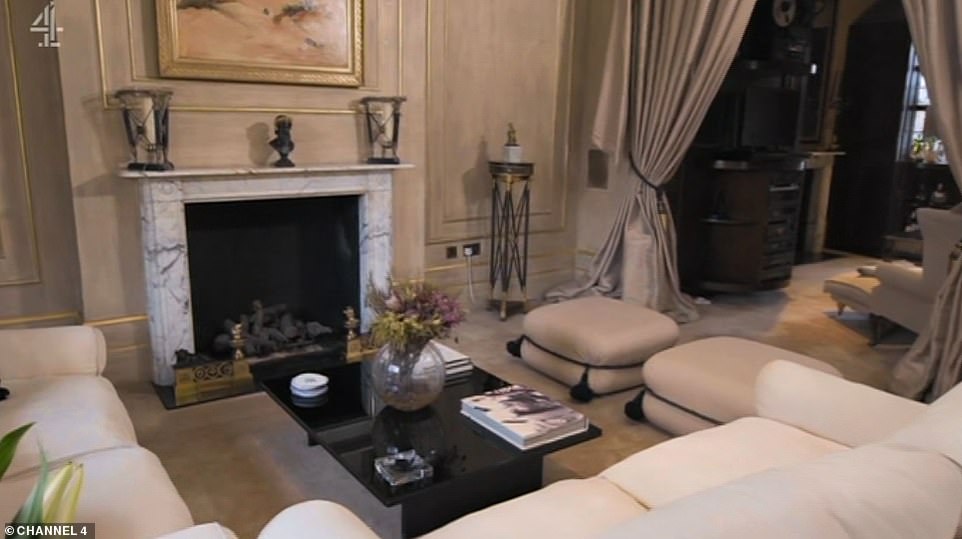 Karl decided to make an offer on a £11million dix-bedroom flat in Ovington Square because it had a balcony, something he was particular adamant he needed

The estate agent herself described Karl as an ‘absolutely extraordinary man’.

Karl, who studied electronics, worked for Microsoft and investment banks including Goldman and Sachs and developed an expensive taste for shoes.

The millionaire said he decided to take a ‘shoe-batical’ two to three years ago in order to learn how to make the accessory himself.

He said he now specialises in making shoes out of ‘exotic’ leathers, including crocodile shoes, jackets and wallets on Savill Row.  And a single pair of his shoes can sell for over £20,000.

‘We’re selling them to the guys who are “recession proof”,’ he said, adding his clients include celebrities and politicians how fly privately and enjoy the finer things in life.

Initially, Karl said he was looking for a three-bedroom bachelor pad with plenty of space in the centre of Mayfair.

‘Karl is very much attracted by the London lifestyle,’ Paulina explained.  ‘He likes foods, he likes good whisky, cigars and good clothes,’ she laughed, adding ‘what can be better?’

The first flat Carl visited was a £8.75million flat above the Curzon cinema, which came furnished with premium fixtures. 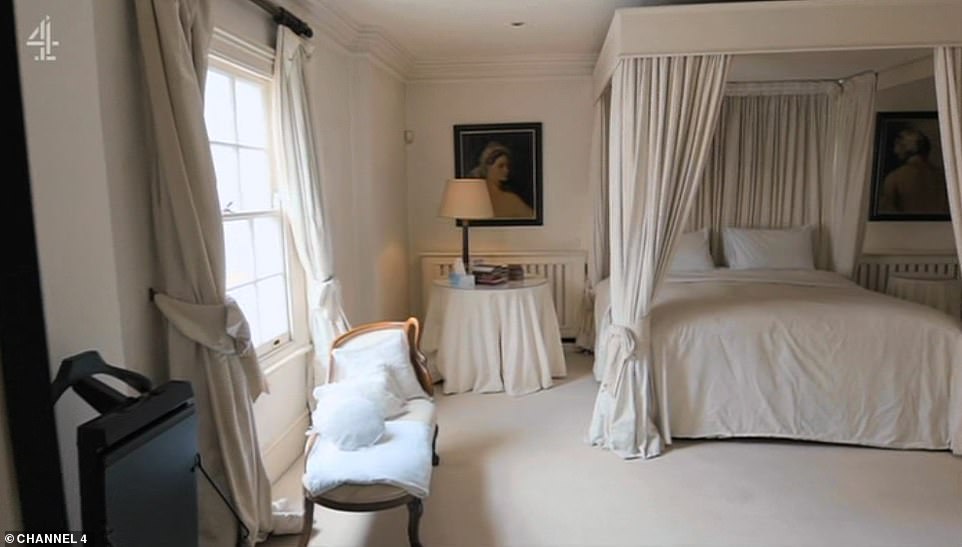 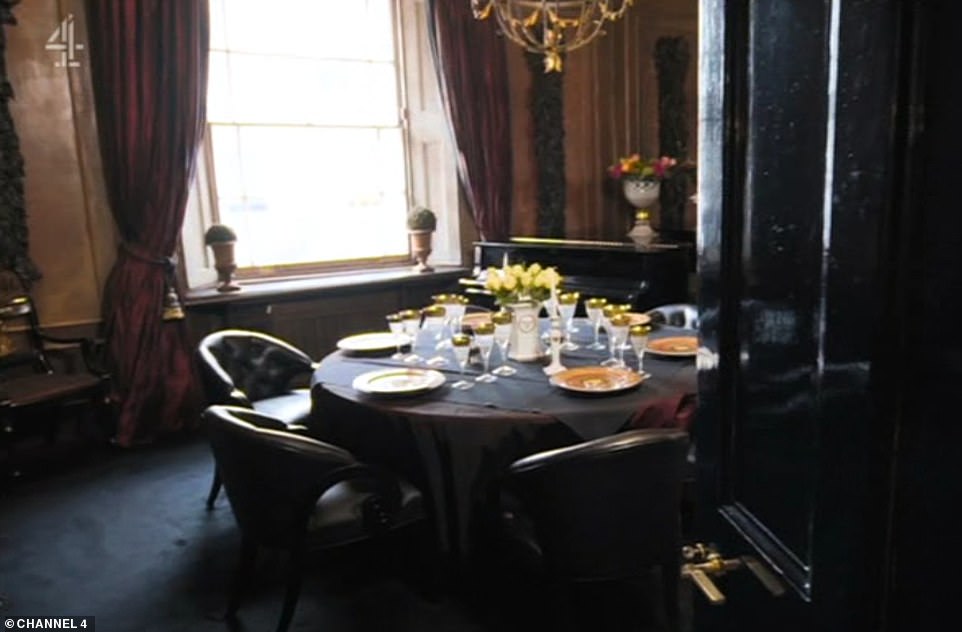 One of the four reception rooms was a dark dining room which particularly seduced Karl, who was looking for a ‘bachelor pad’ 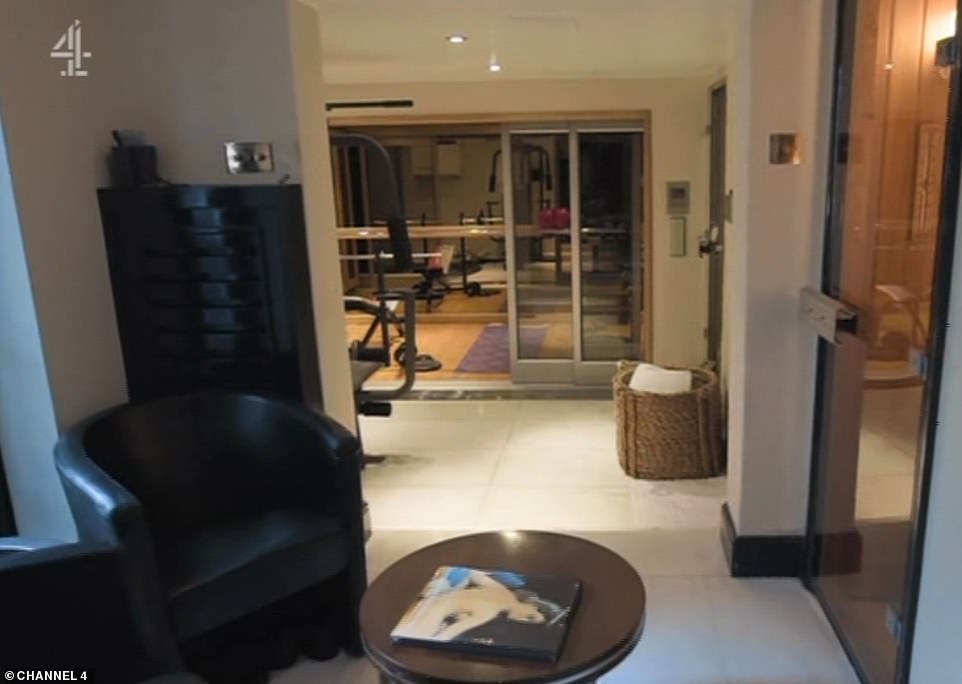 The luxury London flat came with spa facilities and its own gym, pictured. Karl admitted it was 20 to 30 percent over his budget

The 2,700 sq ft open plan flat counted three en-suite bathrooms and each came with bespoke wardrobes in each room, costing £25,000.

It also came with a designer kitchen with an integrated wine cooler, premium appliances and a row of ovens which impressed foodie Karl.

However, the millionaire was disappointed by the lack of terrace on the property, which he said was one of his must-haves.

He also said he didn’t find the flat welcoming and criticised the hallways for being ‘too straight.’

Paulina moved on to showing another Mayfair apartment just around the corner, costing much less, at £6.75million.

The flat was 600 sg ft smaller, but the cheaper price was attractive to Karl, who seemed to be seduced by the property enough to forgo the terrace. 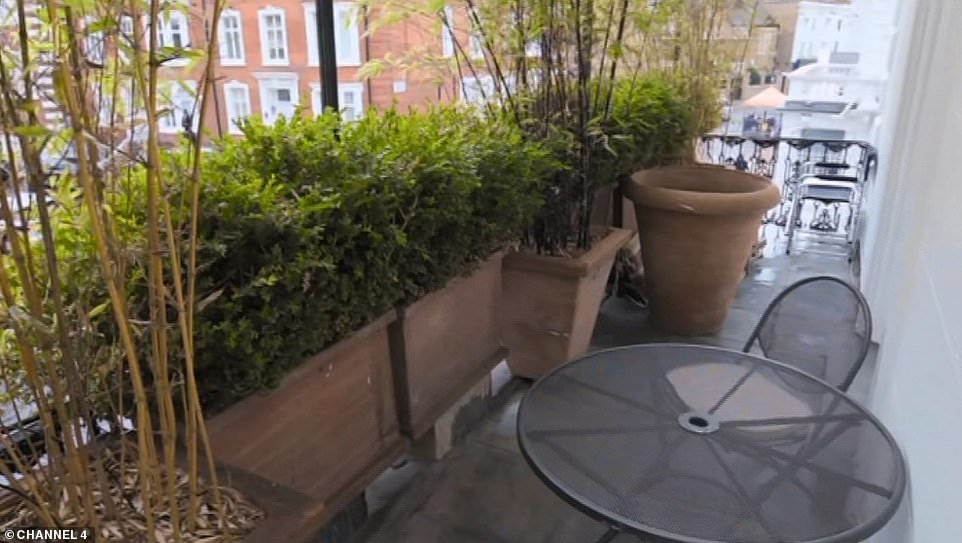 The flat’s small terrace particularly convinced Karl to make an offer on the property, even though it was not in his preferred location 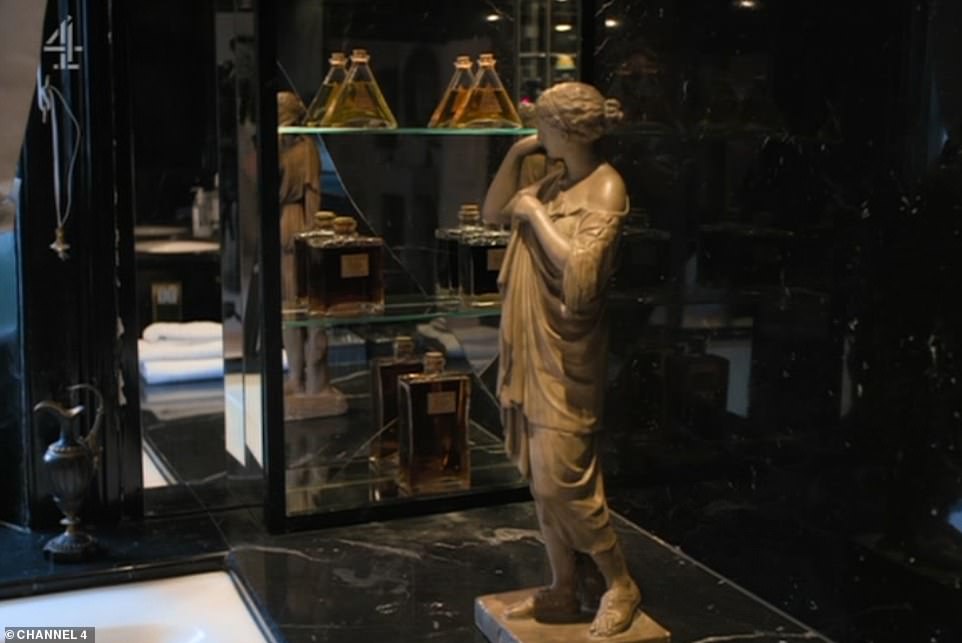 The apartment belonged to the same owner for 42 years, but h was now ready to sell and Karl was seduced by the dark aesthetics of the property 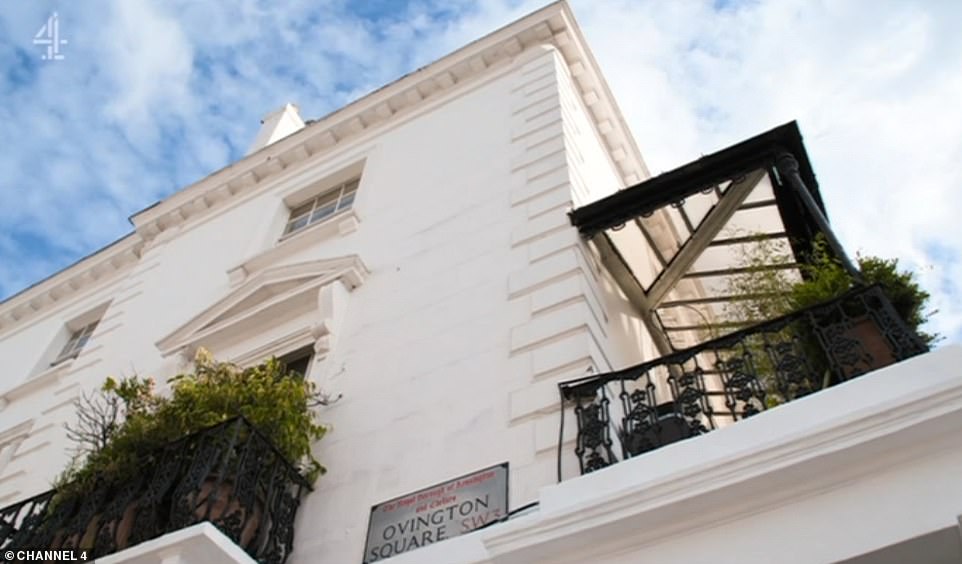 The flat was located in a beautiful Victorian building located at the corner of Ovington Square. Paulina said it was a risk to show it to Karl because it was over its budget 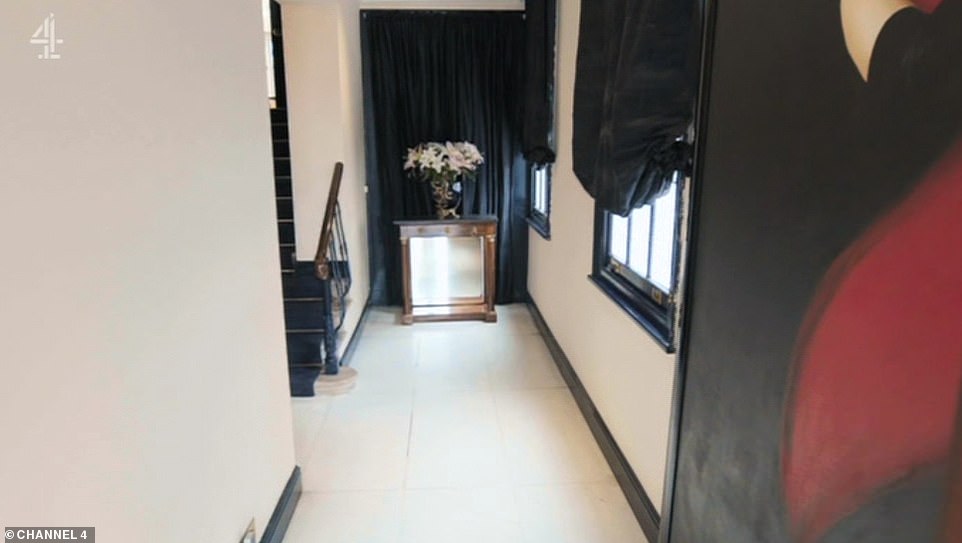 The property had striking white and bold dark features throughout, and Karl was particularly enthusiastic about purchasing this flat

It came with two bedroom and an open plan layout.  ‘I definitely like the layout of this one,’ Karl said, adding it was ‘lovely.’

Karl liked the flat so much, he considered turning the study into a cigar lounge rather than having a terrace.

He was also pleased with the fact the flat is located only ten minutes away from Savill Row, where Karel works.

But Paulina had another ace to place, and decided to take a risk by showing Karl a property which was located further away from Mayfair, and cost nearly double what the second flat did.

She took him to Ovington Square to show him a six-bedroom-house, which comes with four bathrooms, spa facilities and a small terrace. 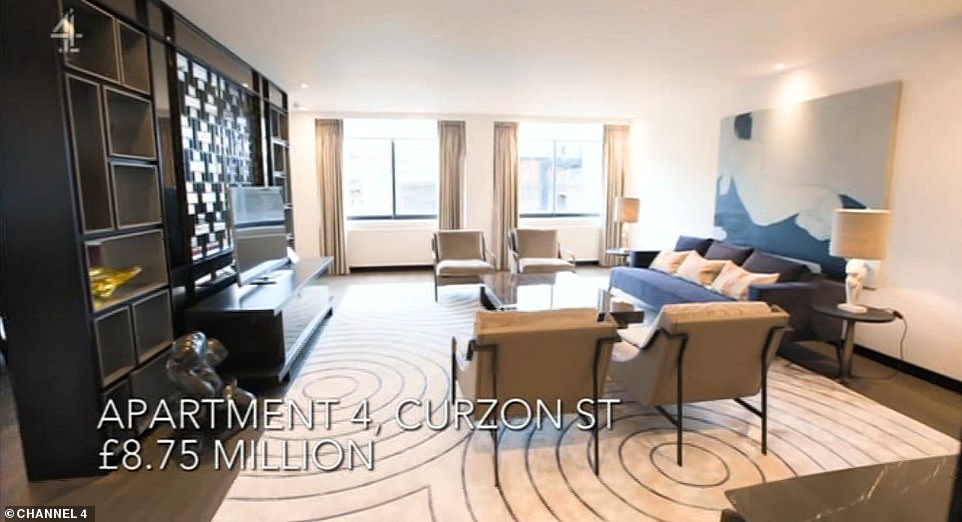 Another flat Karl saw was located above the Curzon cinema in Mayfair and cost £8.75million for 2.700 sqft. But it did not include a terrace 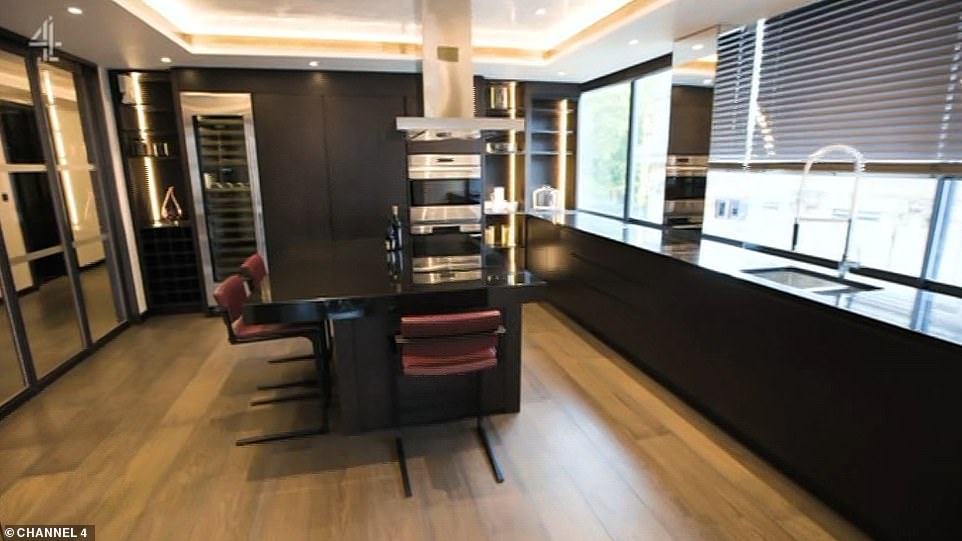 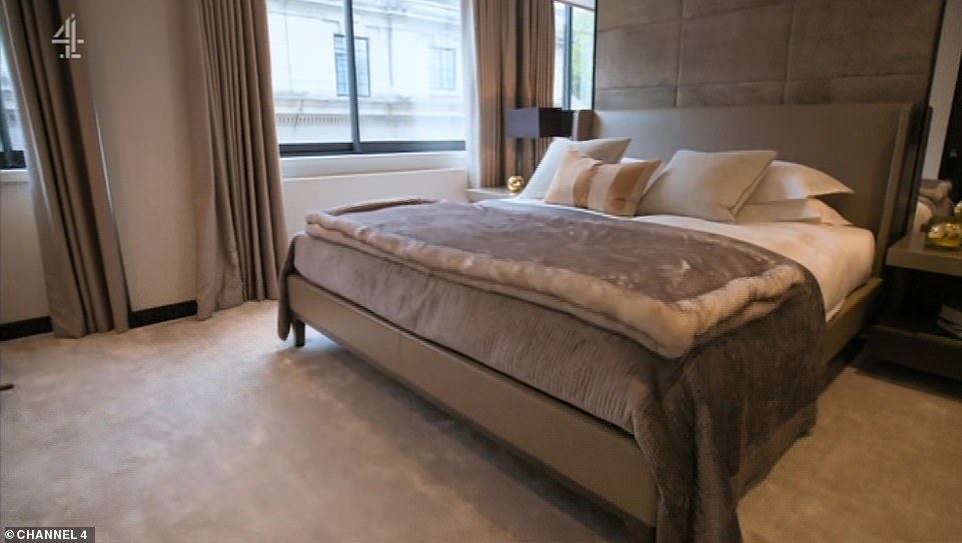 Each of the three bedrooms came with its own en-suite and bespoke wardrobes costing an eye-watering £25,000. The flat came furnished 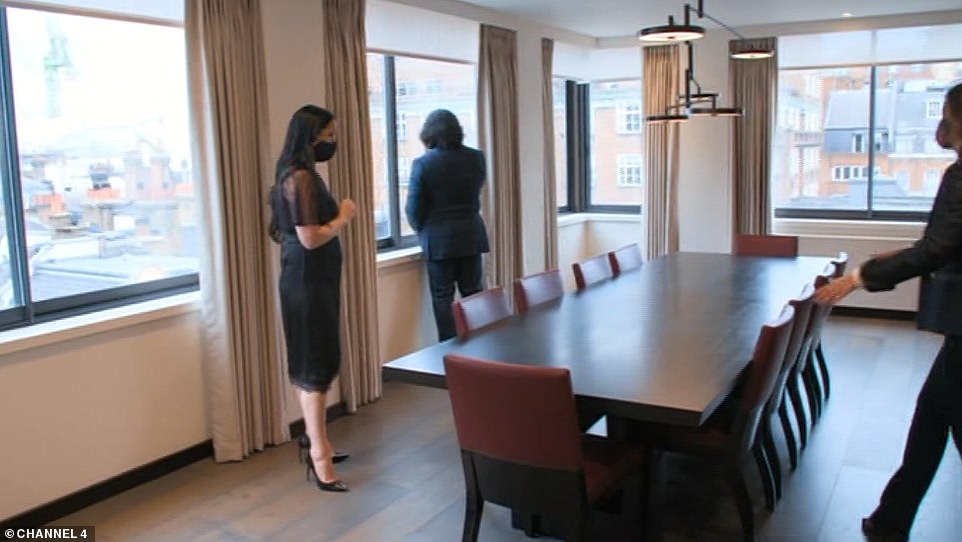 The large dining-room overlooked the city, however, Karl was disappointed the flat did not come with a terrace where he could smoke

She also told Karl the house comes was granted planning permission to extend to 6,000 sq ft, which means Karl could modify the flat to his taste even further.

Paulina explained the former owner of the flat had it for 42 years, but was ready to sell. She also admitted she knew it was above Karl’s budget.

She said: ‘I really hope he’s not going to be pissed off that I brought him to a different location,’ she said, adding she was hoping Karl would be ‘open minded,’ and ‘open hearted.’

In spite of the eye-watering price, the millionaire seemed happy with what he saw, saying it had ‘a lot of potential.’

‘I love the balcony there,’ he said after Paulina gave him a tour of the property.

Karl particularly liked the fact the house had ‘scope for development,’ but he admitted it was 20 to 30 per cent over his budget.

However, he told Paulina he would be making an offer on the most expensive property, even though he needed to sort out the financing.

Karl’s grand sense of style and love of cigars did not impress the Britain’s Most Expensive Houses’ viewers. 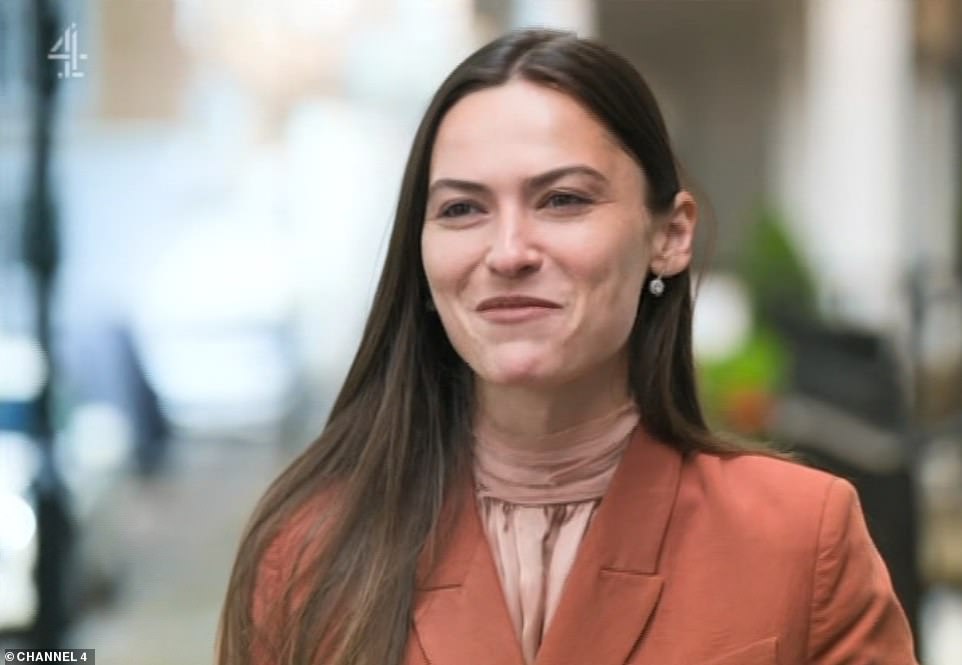 Some said the people on the show had ‘no class whatsoever’ and that Karl made his fortune making ‘grotesque’ shoes.

‘For me it would definitely not be in this country and none of the properties on this programme, stupid parasitic greedy agent,’ one viewer said.

‘Essentially paying £11m for a balcony… not sure why anyone would want to buy a house that looks like somewhere you’d go for a dental treatment,’ one said.

‘Just what the world needs. We have key-workers who can’t afford rent and food (or to move out of their parents’ house) but sure, let’s look at what the 1 per cent are up to these days (spoiler: they’re thriving,’ another disgruntled viewer wrote.

‘Britain’s Most Expensive Houses should be called Britain’s Biggest A*******. That guy who has made his fortune by skinning alligators to make grotesque shoes and bags made me sick to the stomach. No integrity,’ one said.

‘This ain’t Selling Sunset, is it,’ one viewers said, referencing Netflix’s popular property show based in L.A.

‘Britain’s Most Expensive Houses reminds me how stupid and vapid some of these people are,’ one said. ‘If I had money, it would be a four bed with acres of land and no neighbours looking in my garden… probably in Devon,’ they added.

‘Watching Britain’s Most Expensive Houses really makes me glad I don’t know anybody rich and stupid enough to buy one, or the Walter Mittys trying to sell them,’ one said. 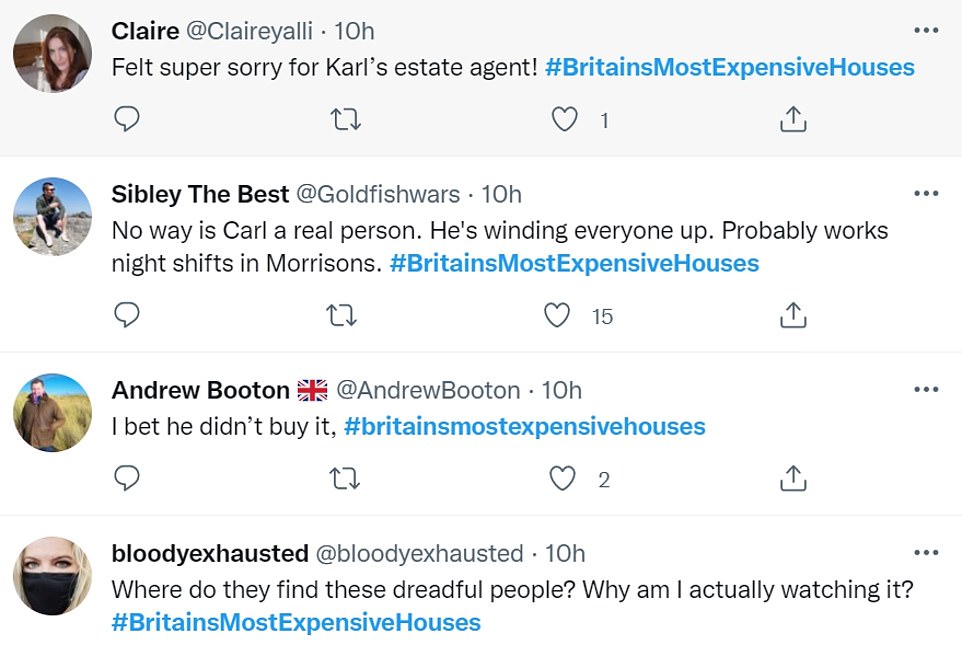 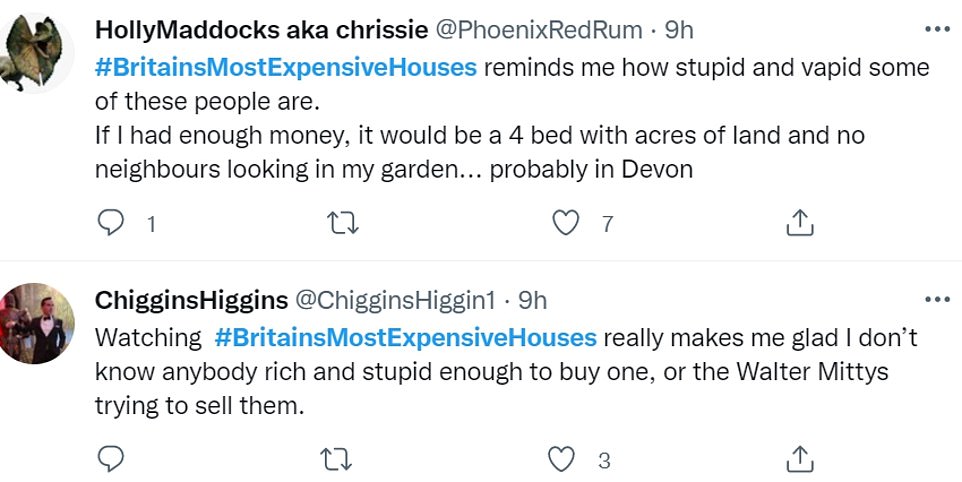 Viewers were not impressed by the show and did not warm to Karl’s personality, saying he was vapid, tasteless and ‘dreadful’