Vigilante fears grow as father of victim, 14, calls for teenage thugs to be ‘taught a lesson’

Fears more youths will take the law into their own hands continue to reach boiling point as police come under fire for failing to address African gang attacks.

Anthony Ferrari’s son Xavier, 14, and his mate Ricky, 17, were waiting for a bus home outside Wyndham Vale station late last month when a group of about 30 youths targeted them.

‘There is a lot of talk about (vigilante action). And the talk is mainly about people being frustrated with (the attacks),’ Mr Ferraro told Daily Mail Australia. ‘A lot of people think there is not enough being done to stop it.’

Anthony Ferrari’s son Xavier was robbed by a gang of youths outside Wyndham Vale station. He fears vigilantes may take matters into their own hands 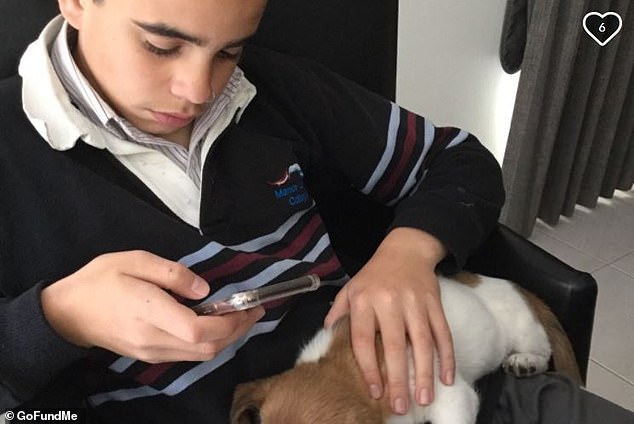 A GoFundMe page has been set up to raise money for Xavier, who lost a $1,000 gold necklace and other items in the attack

Xavier was robbed of a bank card, iPhone and a $1,000 gold necklace by the gang.

The attack prompted local youths to return to the station with baseball bats in what locals fear is just the beginning of a likely showdown between white and African youths.

‘It’s not what we want, I don’t think it solves anything,’ Mr Ferrari said.

But the Wyndham Vale truck driver said residents are sick and tired of being robbed by what can only be described as African gangs.

‘What happened to my son is happening on a daily basis in our area so my son is not the only one,’ Mr Ferrari said. ‘I could reel off the names of 10-15 kids we know through clubs that have been jumped by these kids on the buses.’

Many of the attacks happened on buses near Wyndham Vale and Tarneit stations and Werribee Pacific shopping centre – known locally as ‘The Plaza’ – Mr Ferrari said.

The worried parent said he knew of three kids who were robbed late last year by a group of brazen African youths who were apprehended when they used their victim’s bankcards to have pizzas delivered to their own homes.

A teenager suspected of carrying out the attack on Xavier and Ricky were arrested last weekend.

It is understood police plan to make further arrests over the attack in the coming days and weeks.

While Mr Ferrari applauded the quick work of police, he said he did not expect those responsible to receive justice.

‘It’s easy to say throw the book at them and lock them up, but what are the long term ramifications? They’re only going to get an education in jail and probably come out a lot worse,’ Mr Ferrari said.

‘I don’t know how to explain justice or what sort of justice we want. Yes, I want them to be punished, but to what extent I don’t know. I’d rather make sure it never happens again. You want him to become a better person don’t you.’

One of the alleged attackers, a 16-year-old boy from Brookfield, was allegedly on bail when he committed the attack.

The youth was released from custody on Monday after again being granted bail in a children’s court.

His release spurred more than a hundred angry posts on social media within an hour of word getting out.

‘Something has failed,’ Mr Ferrari said. ‘More than being punished, you’d rather see it never happen again, but who knows how that is going to happen?’

Mr Ferrari scoffed at suggestions he and a photographer had worked with the baseball carrying youths to create a picture that was splashed across the front page of a Melbourne newspaper.

The publication has come under fire from ABC broadcaster Jon Faine, who continues to suggest the photo was fixed.

‘We had no idea those kids had weapons until they produced them,’ Mr Ferrari said.

Mr Ferrari has set up a GoFundMe page in a bid to raise money to replace his son’s stolen items.

A treasured gold necklace stolen in the attack had been bought for Xavier by his dad just weeks earlier.

Mr Ferrari said he bought the necklace after his son made a selfless request for his birthday.

‘For his birthday, [Xavier] asked for everyone to donate to suicide awareness instead of a gift,’ he said.

‘He suffers anxiety and also lost his uncle, my younger brother to suicide. So I surprised him with the necklace and cross.’