The eight-month cruise will be operated by the 930-guest Viking Sun liner with tickets for the voyage, called the Ultimate World Cruise, starting from a staggering £66,900 per person.

It is hoped that when the vessel returns to London in May 2020 it will have set the Guinness World Record for the ‘longest continuous passenger cruise’.

The ‘world’s longest cruise’ will set sail from London on Sunday on an epic 245-day journey. It will be operated by the Viking Sun cruise ship, pictured

A map showing the route the Viking Sun will take on its 245-day voyage. It will visit 51 countries and 111 ports

Viking is promising that the ship, which will depart from Greenwich, will fully circumnavigate the globe ‘bringing guests to some of the world’s most legendary cities, iconic landmarks and far-flung destinations’.

Guests will begin the first leg of their cruise with calls to some of the coastal destinations in the UK and Ireland including Dover, Dublin, Liverpool, Holyhead, Belfast and Edinburgh.

It will then allow guests to explore Scandinavia, the Caribbean and destinations throughout South America before calling on the remote tropical islands of the South Pacific.

Viking Sun will then continue its journey along the coast of Australia and through Asia before returning to the Mediterranean and Europe.

Stunning locations guests will visit on the way will include the sprawling Great Barrier Reef, the lush Amazon rain forest, the famous Pyramids in Egypt, the majestic Norwegian fjords, the architectural wonder of Machu Picchu and the ancient marvel of Angkor Wat.

On the ship itself, guests will have access to two swimming pools, a fitness centre, two cinemas, a theatre and LivNordic spa, where the brave can try the traditional Nordic bathing ritual and snow grotto, as well as eight dining options.

To keep meals exciting and varied for the full 245-day itinerary, Viking says guests will be treated to a different menu each day with ‘delicious, destination-inspired food at the heart of the 680,000-odd meals that will be consumed’.

There will also be an onboard historian and guest lecturers, who will ‘shed light on each destination’s history, art, architecture, music, geopolitics, natural world and more’ as well as live musical performances covering different genres, time periods or cultural highlights from the region. 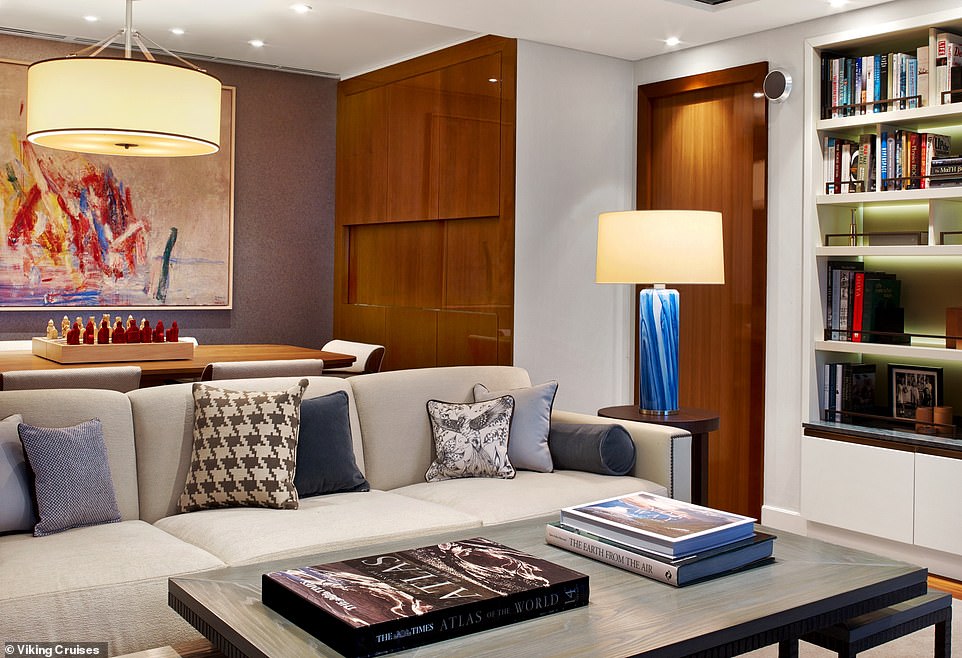 The Owner’s Suite stateroom – the most expensive suite onboard the Viking Sun. Prices to join the cruise start from £66,900 per person

If a 245-day cruise is too long for some passengers, they also have the choice of sailing on one of two shorter segments.

First, there is the 127 World Treasures journey from London to Los Angeles, which starts at the weekend. Remaining cabins start from £41,390 per person.

Or guests can opt to join the 119-day World Wonders cruise, departing from Los Angeles to London on January 4, 2020, with prices starting from £32,990.

Included in the price of the trip is an excursion at each port of call, unlimited onboard Wi-Fi, all gratuities and service fees and a business class airfare.

Torstein Hagen, chairman of Viking, said: ‘For more than 20 years we have been committed to connecting travellers to culturally immersive experiences that allow them to explore the world in comfort. 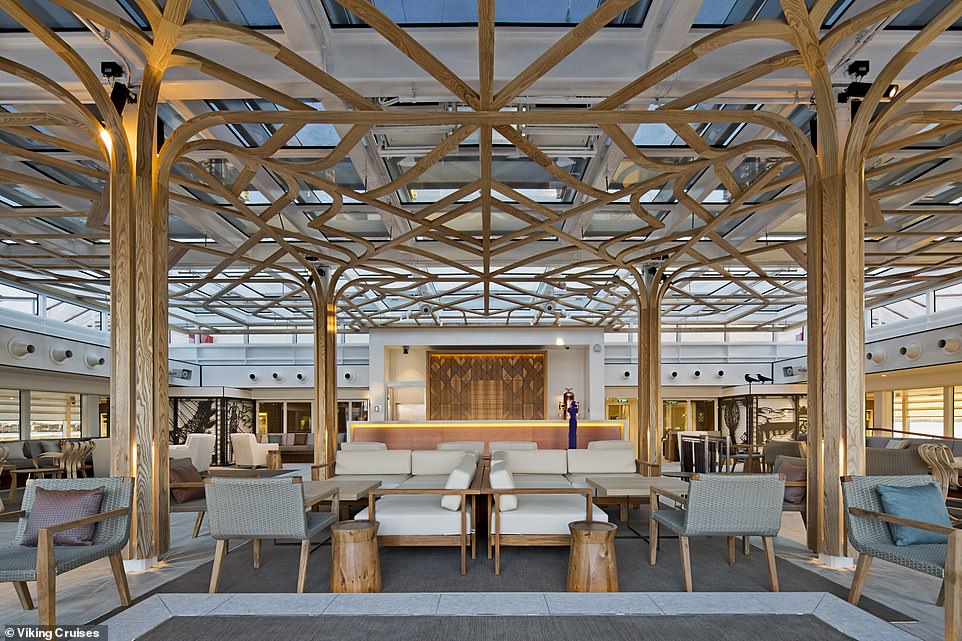 It is hoped that when the vessel returns to London in May 2020, it will have set the Guinness World Record for the ‘longest continuous passenger cruise’.  Pictured is one of the lounges onboard Viking Sun 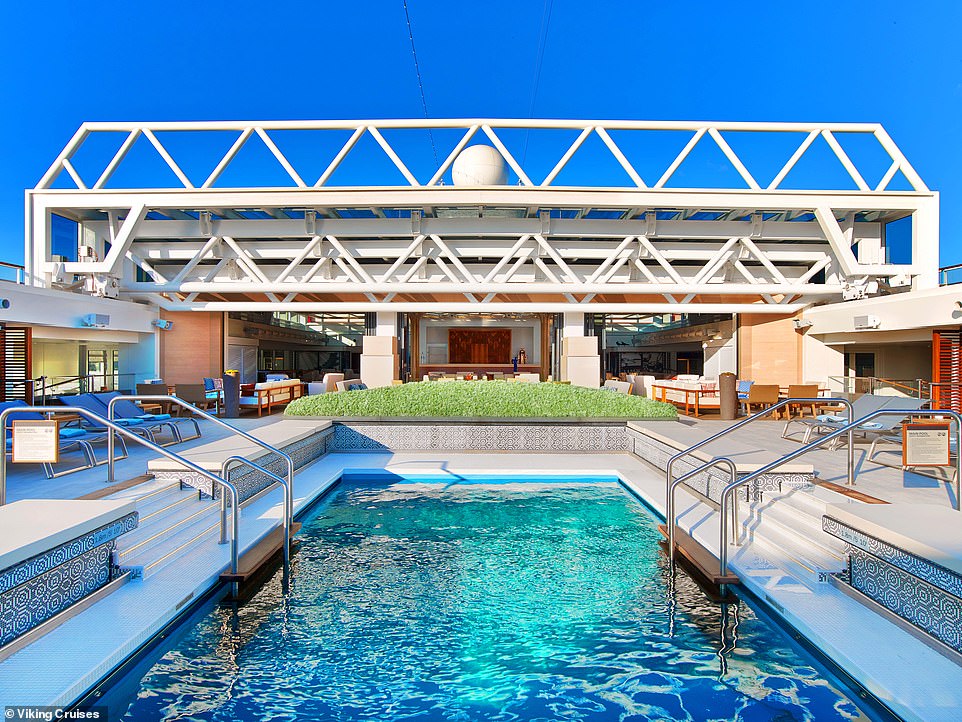 High life on the high seas: On the ship itself, guests will have access to two swimming pools, a fitness centre, two cinemas, a theatre and the LivNordic spa

‘Our Ultimate World Cruise is the most extensive itinerary available in the industry, nearly double the length of our previous world cruise itineraries. I am pleased to offer such a unique experience for our guests.’

Wendy Atkin-Smith, managing director of Viking UK, added: ‘We broke our own Guinness World Record in 2014 when we christened 16 new river ships in one day. We only launched ocean cruises in 2015 so to already be attempting the world record for the longest continuous passenger cruise four years later is remarkable.

‘Everyone at Viking UK is particularly proud and excited that the cruise is setting sail from Greenwich. We can’t wait to hear all our guests’ stories when they get back.’

Neil Foster, vice president creative consultancy EMEA APAC at Guinness World Records, said: ‘We’re very excited to be working with Viking Cruises on what promises to be one of the most exciting commercial cruise itineraries launched to date.

‘Securing a Guinness World Records title is no easy feat and we wish the passengers and crew of the Viking Sun the best of luck with their attempt. Our adjudicators look forward to seeing the Viking Sun return and hope that they will be crowning the voyage as the longest ever continuous cruise.’

Greenwich: London at Your Door – Dock in the historic Royal Borough of Greenwich, London, which allows guests easy access to the regal capital’s iconic sights, including the Houses of Parliament, Big Ben, Westminster Abbey and Buckingham Palace.

Rio de Janeiro, Brazil: Peak of Brazilian Culture – One of the 23 overnight stays on this itinerary occurs in the historic city of Rio de Janeiro, where guests can witness the larger-than-life Christ the Redeemer statue or relax on the scenic Copacabana and Ipanema beaches of this coastal metropolis.

Ushuaia, Argentina: ‘End of the World’ – Commonly referred to as the ‘End of the World,’ guests will visit Ushuaia, a city perched on a steep hill on the southernmost tip of South America, and explore its lush scenery through excursions to the nearby Escondido and Fagnano Lakes or the Tierra del Fuego National Park, which was first inhabited by humans 10,000 years ago. 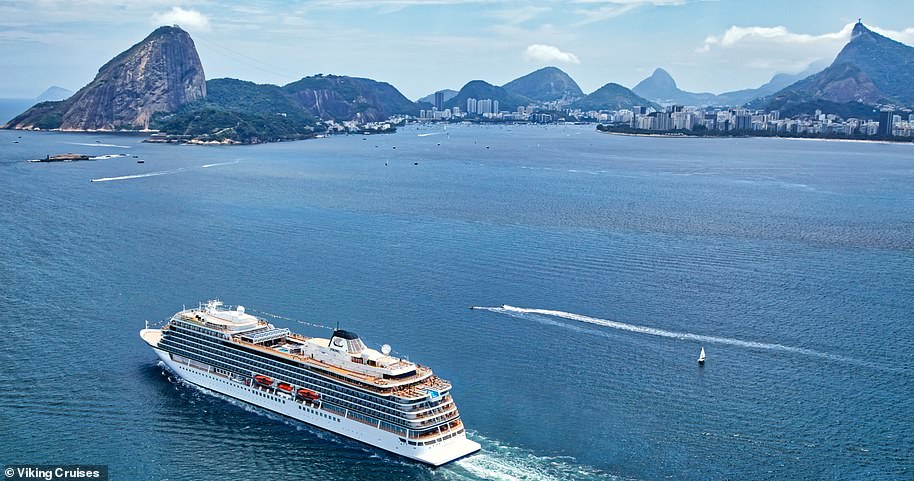 Viking Sun sails close to Rio de Janeiro, one of the calling points on the cruise, on a previous sailing. Here guests can visit Copacabana and Ipanema beaches as well as the Christ the Redeemer Statue

Hobart, Tasmania: An Island of History and Wilderness — The capital of Australia’s island state of Tasmania, Hobart offers guests the chance to learn about its aborigine history and explore its unique wilderness area, including Mt. Wellington, which the city is nestled under.

Mumbai, India: The Front Door to India – The bustling city of Mumbai, formerly Bombay, is the financial, commercial and entertainment capital of India. While in port, guests can learn about the iconic activist Gandhi at the Mani Bhavan Gandhi Museum and visit the Hanging Gardens, one of the prized few parks found in the busy metropolis.

Luxor, Egypt: Temples and Tombs – The site of the ancient Egyptian city of Thebes, Luxor is dense with historical monuments for guests to explore, including the Temple of Karnak and the Valley of the Kings & Valley of the Queens, which house the tombs of the Pharaohs and their wives.