Convicted arms dealer Viktor Bout, known as the Russian Merchant of Death, is back in his homeland after he was swapped for WNBA star Brittney Griner on Thursday.

Bout, 55, has spent the last 12 years in federal prison in Marion, Illinois, on charges relating to arms dealing and conspiring with terrorists to kill American civilians alongside Colombian rebels. He still had 13 years of his sentence remaining.

In his storied career, Bout is accused of working with terrorist organizations such as Al-Qaeda, as well as groups in Pakistan, Iran and Somalia.

Bout’s exploits helped inspire the 2005 Hollywood film Lord of War starring Nicholas Cage, which was loosely based on his life. Among his most infamous acts, was stealing $32 billion worth of weaponry from Ukraine between 1992 and 1998.

In August, DailyMail.com revealed that Bout had become part of the negotiations to bring Griner home.  The Russian Foreign Ministry confirmed the swap, saying in a statement carried by Russian news agencies that the exchange took place in Abu-Dhabi and that Bout has been flown home.

During his career trading weapons Bout became notorious for his willingness to arm almost anyone, from militias in Sierra Leone, to Charles Taylor’s brutal Liberian regime, to the Taliban.

A native of the city of Dushanbe in Soviet Tajikistan, Bout is reported to be fluent in several languages and to have served in the Soviet army as a military translator, including in Angola. He has said he attended a Moscow language institute that serves as a training ground for military intelligence officers.

After the 1991 collapse of the Soviet Union, he was able to capitalize on a glut of cheap, Soviet-made weaponry that could be sold to customers in Africa, Asia and South America.

Operating out of the United Arab Emirates, he used a fleet of Soviet-era planes, that he founded discarded in disused air force bases, to supply guns to insurgencies, warlords and rogue states around the world. 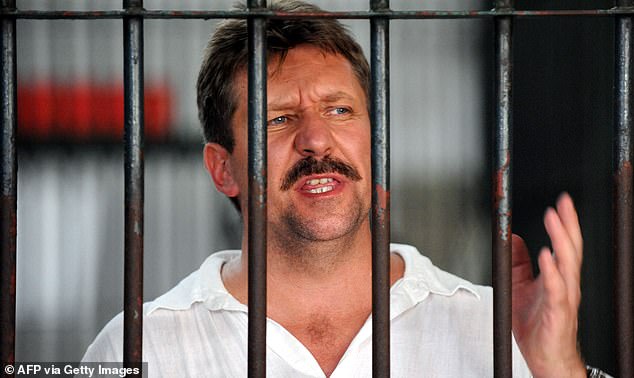 Bout’s exploits helped inspire the 2005 Hollywood film Lord of War starring Nicholas Cage, which was loosely based on his life

He began a life on the run in 2002 when law enforcement in Belgium issued an arrest warrant for him. It’s thought that he used fake passports to move around under a succession of aliases. Bout eventually showed up in Russia in 2003.

The moniker, Merchant of Death, was coined by British Foreign Office Minister Peter Hain, who said in 2003: ‘Bout is the leading merchant of death who is the principal conduit for planes and supply routes that take arms… from East Europe, principally Bulgaria, Moldova and Ukraine to Liberia and Angola.’

Hain added: ‘The UN has exposed Bout as the center of a spider’s web of shady arms dealers, diamond brokers and other operatives, sustaining the wars.’

Bout was arrested in 2008 in a Bangkok hotel in Thailand after a sting operation by U.S. agents who recorded him offering to sell missiles to people he believed were leftist Colombian guerrillas.

In a 2009 interview with Channel 4 in the United Kingdom, Bout denied ever working with Al-Qaeda but said that he did fly arms into Afghanistan to aid the forces who were battling the Taliban.

Bout said in the same appearance that he helped UN peacekeepers in Rwanda in the 1990s and brought supplies into the genocide-ridden country.

Following his arrest, then attorney general Eric Holder referred to him as ‘one of the world’s most prolific arms dealers.’ Though the arrest angered the Kremlin. He was extradited to the US in 2010.

At trial, Bout maintained his innocence. A jury heard that when a terrorist organization told him that his weapons would be used to kill American pilots, he replied: ‘We had the same enemy.’

In 2012, he was given a 25-year prison sentence by a U.S. court on multiple charges related to his arms dealing career. He was 45 at the time. Russia has always proclaimed his innocence, describing his case as a glaring injustice and attempting to secure his release.

The same year, Bout was named as an associate of Liberian President Charles Taylor and accused of aiding in war crimes committed during the civil war in Sierra Leone.

Biden’s authorization to release a Russian felon once nicknamed the Merchant of Death underscored the escalating pressure that his administration faced to get Griner home.