The body of a man has been found on a road which was left underwater two weeks ago during severe flooding which devastated much of the north of England.

A man’s body has been recovered from a road in Doncaster that was left underwater for more than two weeks following the floods that devastated South Yorkshire earlier this month. Police launched an investigation after the body was discovered on Saturday afternoon.

Villages in South Yorkshire and the East Midlands were left reeling following the ‘biblical’ rain earlier this month during which over 1,200 homes were evacuated and former High Sheriff Annie Hall was swept to her death.

Forecasters are warning more is yet to come as the remnants of Storm Sebastien, formed in the tropical Atlantic last week, continues to cause havoc.

The Met Office has today issued a yellow weather warning for rain across South West England, along with strong 50mph winds.

Tonight is set to see rain continuing across northern Britain, with showers dying out after midnight across central and southern areas. But further heavy rain and strong winds are expected to reach the southwest by dawn.

Tomorrow will see heavy rain heading north across the UK, with scattered thundery showers and strong winds in the south and west.

The wet and windy weather will gradually clear eastwards on Wednesday night and it is set to become drier by Friday and turning colder with some sunshine.

Villagers were left stunned when they spotted a grey seal swimming in a river 20 miles from the coast as flooded areas of Britain prepare for another three days of heavy rain.

The animal was sighted in the River Delph, in Welney, Norfolk, after drifting in on floodwaters following persistent downpours that have seen part of the UK submerged.

After spotting the seal in Norfolk, Sally Hayworth, from Welney, said: ‘I was walking along near the river and saw its head bobbing about above the water and couldn’t believe it.

‘We usually see birds in the river, but I’ve never seen a seal there before, it’s very exciting. He certainly looked very happy, even though he is miles away from his usual home.’

Emma Brand, of the Welney Wildlife Trust (WWT), said it was unusual to see seals so far inland. 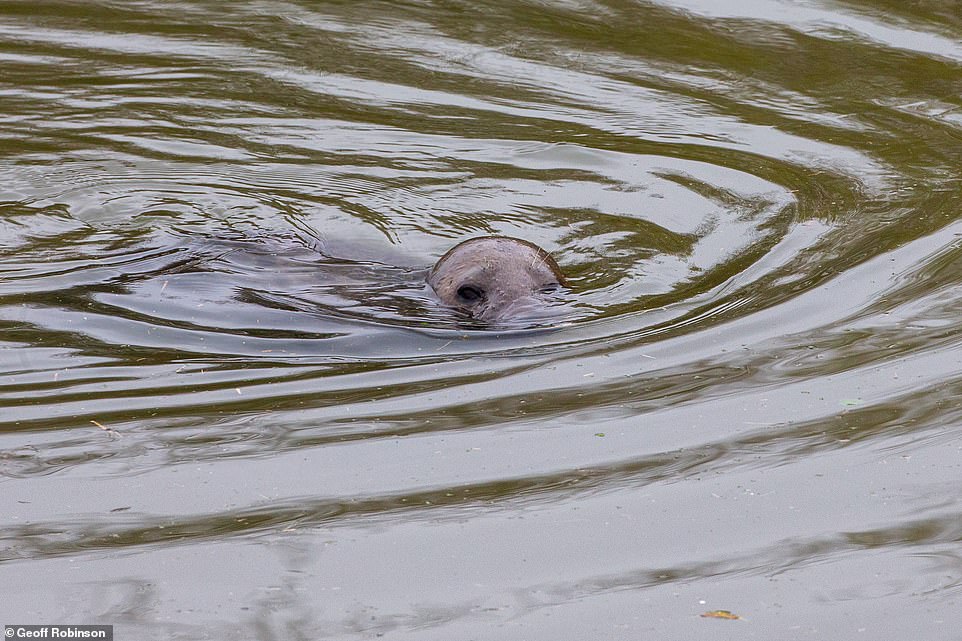 The animal was sighted in the River Delph, in Welney, Norfolk, after drifting in on floodwaters following persistent downpours 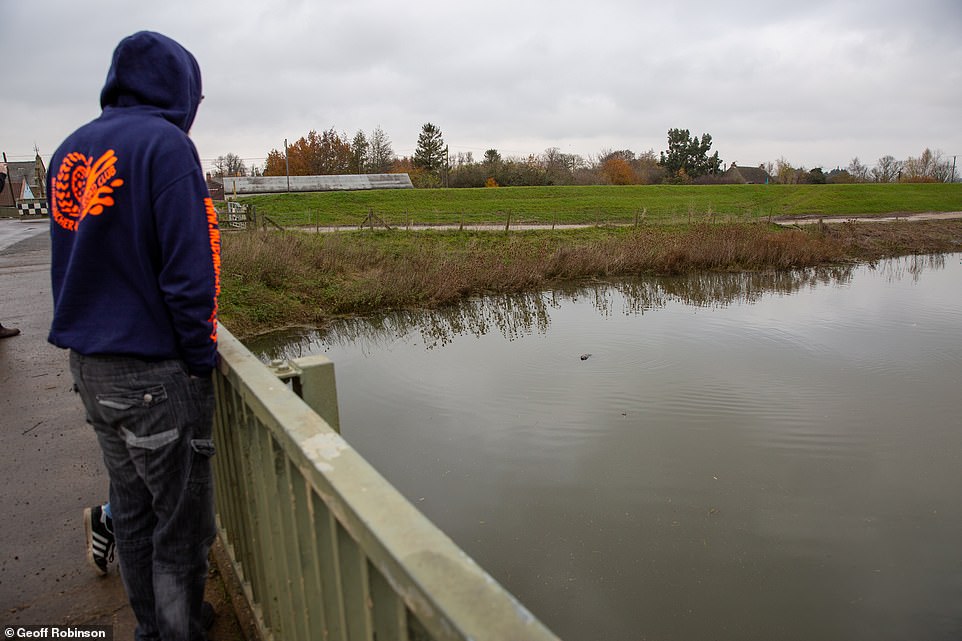 After spotting the seal in Norfolk, Sally Hayworth, from Welney, said: ‘I was walking along near the river and saw its head bobbing about above the water and couldn’t believe it’ 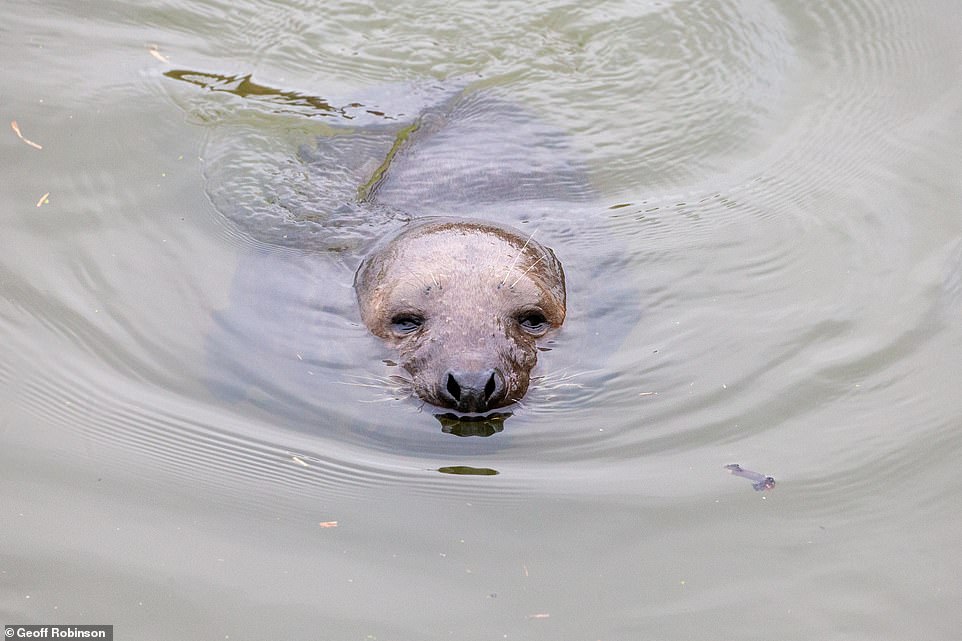 She added: ‘It’s not its usual habitat and it is unusual to see seals here. It may be a youngster who has got disorientated, but is finding enough fish in the water to be happy.’

The stormy weather comes as a farm in Lincolnshire is still cut off by floodwater two after a river flooded following torrential downpours.

Joe and Henry Ward’s farmhouse and outbuildings were left surrounded by 15ft of water after the Barlings Eau, a river near Lincoln, burst its banks in mid-November.

More than 1,000 acres of farmland in Lincolnshire was left underwater and a fortnight later the farmers are still having to use a boat to get to their buildings. 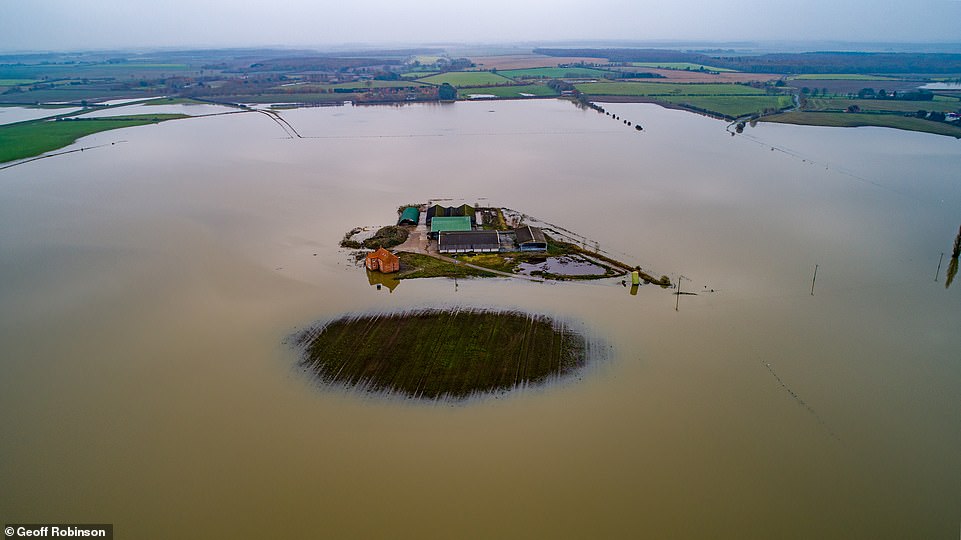 A farm in Lincolnshire (pictured yesterday) belonging to Henry Ward, 28, is still cut off two weeks after severe flooding was caused by the Eau River bursting its banks 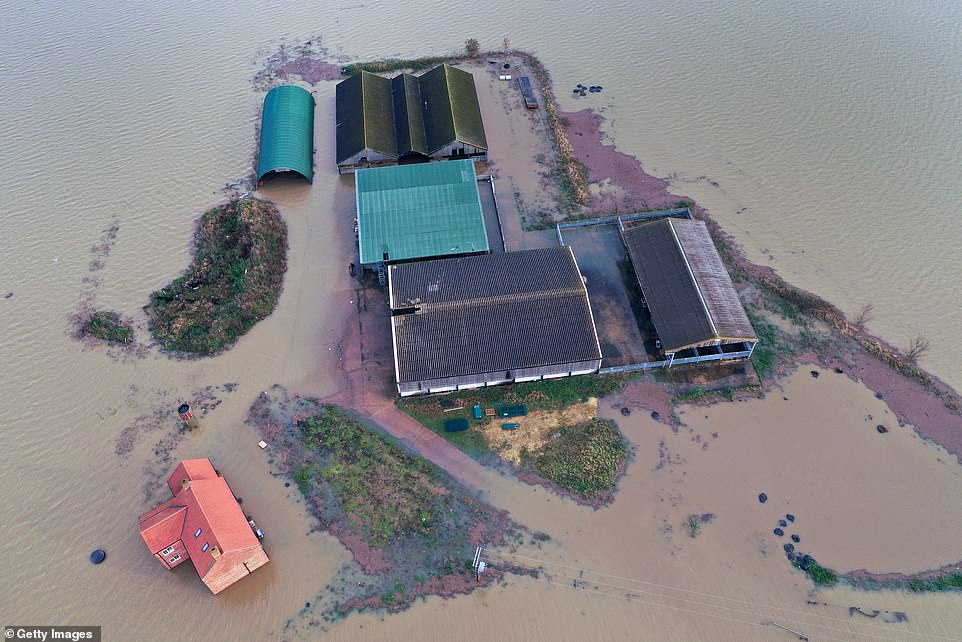 But the pair have been in continuous talks with the Environment Agency, who have arranged for drainage contractors to visit for a meeting with them today.

Joe Ward said: ‘We would like them to evacuate the water by pumping it off, as well as letting it flow freely back into the river if we can, then we’d like them to fix the breach in the bank so we are protected.’

He said the floodwater had subsided by about 25 to 30 per cent and dropped from about 12 to 15 feet at the deepest points to eight feet.

He added: ‘As a country we have got to get to grips with the severe weather events which will become more common. The whole country needs funding to keep the water in the rivers so people aren’t affected.’ 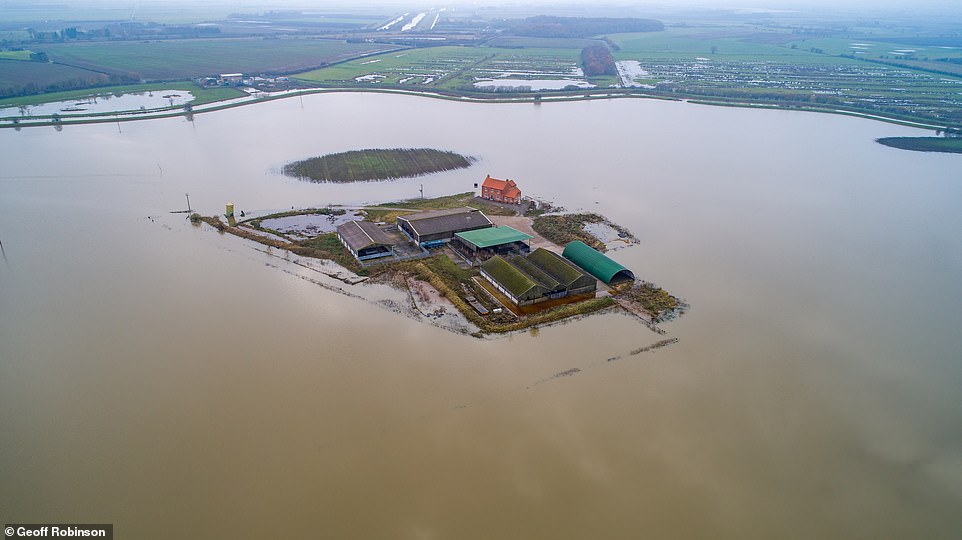 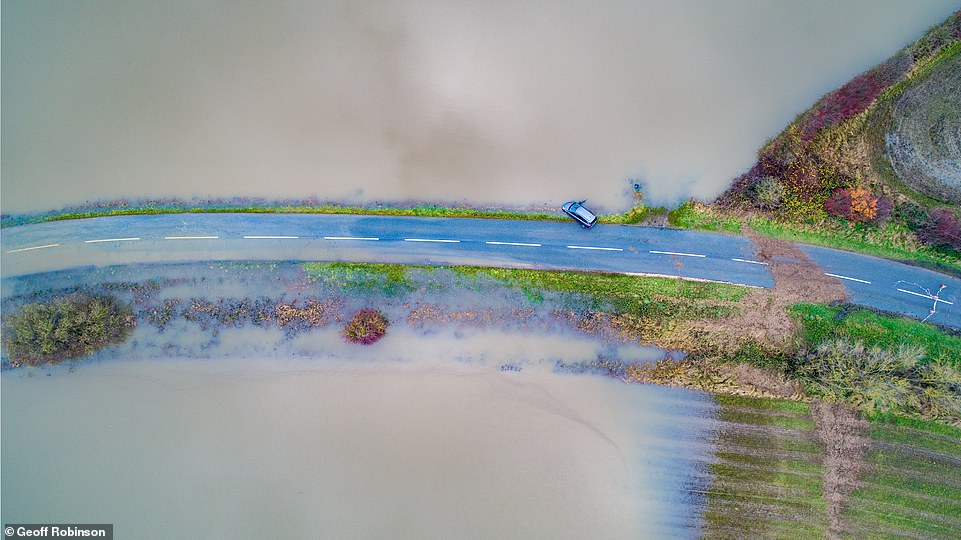 A car is seen toppled on its side along an abandoned road near the farm in Barlings, Lincolnshire, on November 24. More than 1,000 acres of farmland was left underwater across the county after the torrential downpour two weeks ago 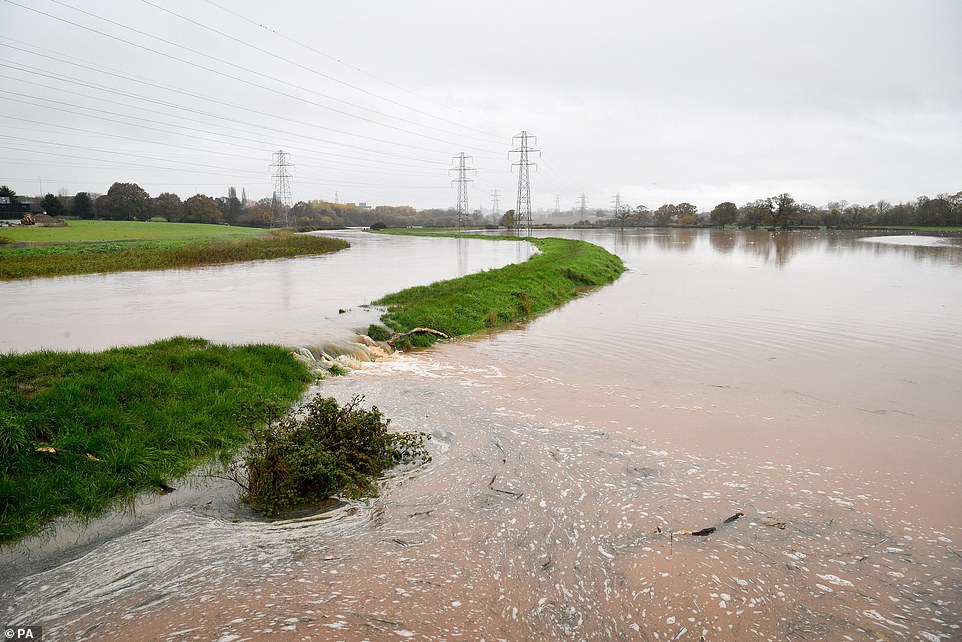 The River Clyst in Exeter has burst its banks and flooded the surrounding area. Earlier this month the Environment Agency issued 171 flood warnings or alerts 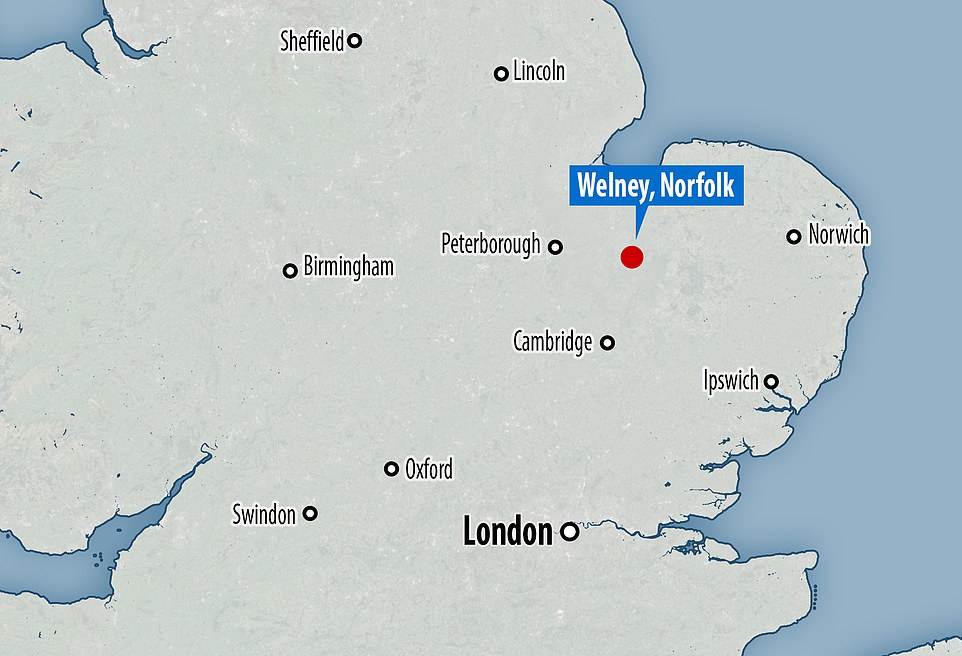 The grey seal was spotted swimming in the flooded River Delph at Welney, Norfolk, which is some 20 miles from the coast