Villagers in a picturesque village near Cambridge have turned to trench warfare in their battle to keep travellers off their green.

The parish council in Swaffham Bulbeck, has dug deep ditches surrounding sports pitches and a children’s playground in order to keep the caravans away.

Villagers in the area have also moved more than a dozen 3ft thick logs to block off the green, while mounds of soil are also piled up to stop caravans driving onto the fields.

The park has a football and cricket pitch on it, as well as a children’s play area. 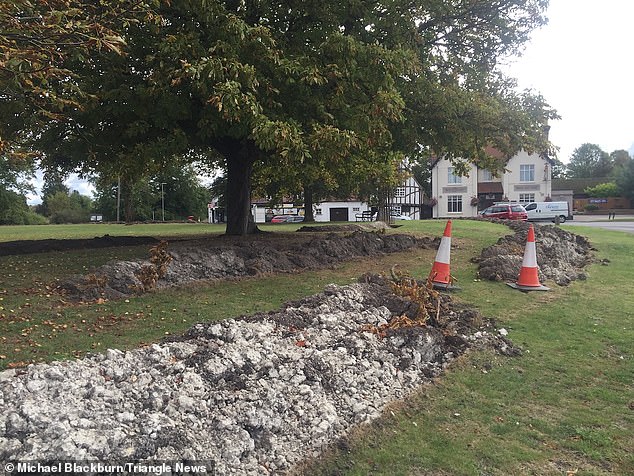 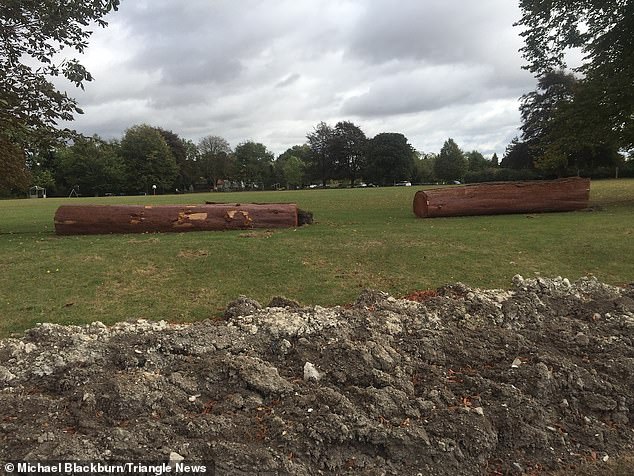 Two huge logs were also seen placed in the middle of the field, after the area was hit by two groups of travellers

The rural idyll has been hit by two groups of travellers camping up on the pitches in the last month.

On September 7, seven caravans and vans pitched up on the field and the parish council filed an eviction notice.

Two weeks later, a larger group of nine caravans arrived and set up a second encampment.

Residents explained it stopped local football clubs playing on the pitches and also blocked off the children’s play area. 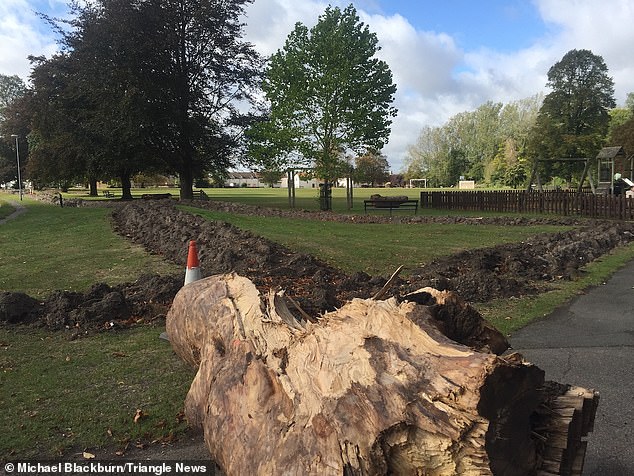 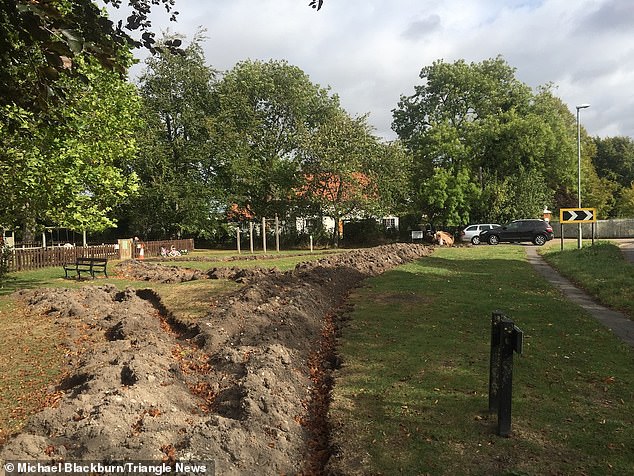 But after evicting the travellers, the parish council took matters into its own hands.

The huge trenches were dug up, in some places three deep. The logs brought in weigh up to a tonne.

The village was able to take such extreme measures as the parish council owns the green.

It is hoped that wildflowers will grow in the trenches to improve the view.

While they are a bit of an eyesore, Councillor Mathew Shuter said no one objected to measures.

He explained: ‘The travellers officer at Cambridgeshire Council recommended this method, as the best to stop the travellers.

‘After civil action the travellers left, and we want to make sure they don’t come back again.

‘It was a very easy access point, there were not any defences around the green so the parish council needed to do something

‘It caused a lot of aggravation in the village.

‘Schools use the ground so the travellers were very problematic.’

Other villages across Cambridgeshire, such as Waterbeach, have been forced to take similar action.

Travellers have roamed across the East of England for many years.

However in Cambridgeshire there are now only 10 legal sites for the groups.

Earlier in September, travellers set up a huge encampment on the promenade in Hove, Sussex, and had to be moved on by police.

In May, a High Court judge refused an injunction from Bromley Council which would have stopped travellers from camping on any public land in the south east London borough.

This is while in 2017 residents in Colchester also resorted to digging a trench around a field taken over by travellers.

Residents of West Bergholt, near Colchester, acted after the group broke the gate and moved their caravans onto the field in the village.

They mobilised a digger to cut a ditch in front of the only entrance to the field, making the area unusable and forcing the group to move on.