‘Vindictive’ boyfriend, 26, sent videos of sex with woman he met on Instagram to her father

A ‘vindictive’ man who was refused permission to marry his girlfriend by her family took revenge by sending sex tapes to her father.

Jamel Ali, 26, from Chester met his girlfriend on photo sharing app Instagram and wanted to wed her.

But her said her parents thought he was ‘too westernized’ and denied their daughter’s wish.

The pair carried on seeing one another in secret until he discovered she was getting married to another man.

He began threatening her with sex videos filmed on his mobile. Ali said he planned to show his girlfriend’s family ‘what kind of girl’ she was.

Then, in October 2017, he arrived at her home, climbed on the roof, and sent the footage to her father.

Stoke-on-Trent Crown Court heard how the victim was so distressed she considered taking her own life after her brother, who had the phone, saw the footage. Ali has been jailed for nine months after pleading guilty to distributing private sexual photos and films with intent to cause distress and two offences of harassment without violence.

Prosecutor Neil Ahuja said the defendant and the victim formed a relationship after meeting on Instagram in 2015.

In the summer of 2016, she told her parents of her feelings towards the defendant, but they did not think he was suitable for an arranged marriage.

Mr Ahuja said: ‘The defendant’s assessment is that they considered him too westernised.’

She tried to end the relationship, but it continued without her family’s knowledge.

‘Ali became possessive and controlling,’ added Mr Ahuja. ‘They had a consensual sexual relationship. He took videos and photos of her naked and in her underwear.

‘She sent him videos of her performing sexual acts upon herself. And he recorded himself having sex with her.’

In early 2017, she asked her parents to start looking for a potential husband and she accepted a proposal of marriage in September 2017.

The defendant found out and became abusive.

Mr Ahuja said: ‘He threatened to send screen shots to her brothers on Facebook. He made threats to turn up at her house, kick the door down and take her. He said they would get married whether her heart was in it or not.

‘He started to harass her father by telephoning him on his landline, mobile and contacting him on WhatsApp. He made threats to abduct her.’

In October the man climbed onto the roof of the family home.

Mr Ahuja said: ‘Her father received a call from the defendant. He claimed he was already married to his daughter. He said he would be at the house within five minutes and he wanted to see ‘his wife’.

‘The defendant came up the drive and knocked on the door. They were all terrified. He demanded to see ‘his wife’. He said, ‘Open the door or I will kick it in’.

‘The victim’s brother was in possession of her father’s phone. He received a WhatsApp message containing a picture of Ali in bed with the victim followed by a message, ‘Would you like to see more’?

‘While police were at the address, another message was sent to a phone in her brother’s possession. The defendant threatened to send pictures to her father’s friends in Stoke-on-Trent. He threatened to damage her father’s reputation. It was followed by further video recordings which showed the defendant having sex with the victim. 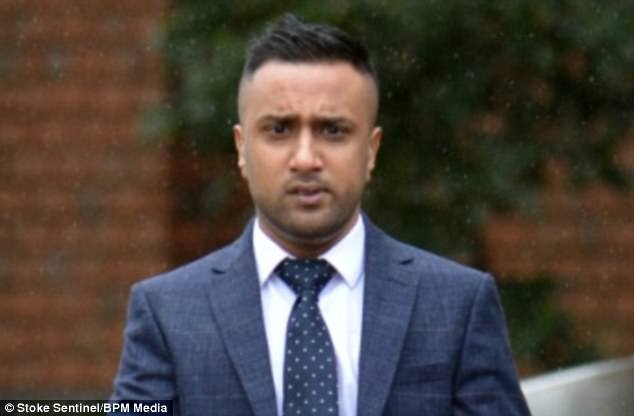 He told the court: ‘He acted totally inappropriately and out of character.

He has had no contact with the complainant or her family since the incidents.’

Judge David Fletcher made the defendant the subject of two restraining orders which prevent him contacting his victim or her father for 10 years.

He told Ali: ‘Rather than accept the marriage you had hoped for was not going to go ahead, you chose to embark on the most hurtful behaviour that one can imagine. It was selfish, vindictive and nasty behaviour.

‘This is very much a 21st century offence. This sort of behaviour is becoming a feature of life which is unpleasant and unwanted.’