Fascinating images from 150 years ago show Hong Kong in the early days of British colonial rule and capture the region, which is currently engulfed in civil unrest and protest, at a far more tranquil time.

John Thomson was one of the first British photographers to venture to the Far East between the years 1868 to 1870.

Hong Kong was ceded by The Qing dynasty to Britain in 1842 in the treaty of Nanjing, which ended the First Opium War.

During his explorations, Thomson took numerous haunting photos of rural and undeveloped landscapes and the native population he encountered.

The view from central Hong Kong Island. John Thomson was one of the first British photographers to venture to the Far East between the years 1868 to 1870 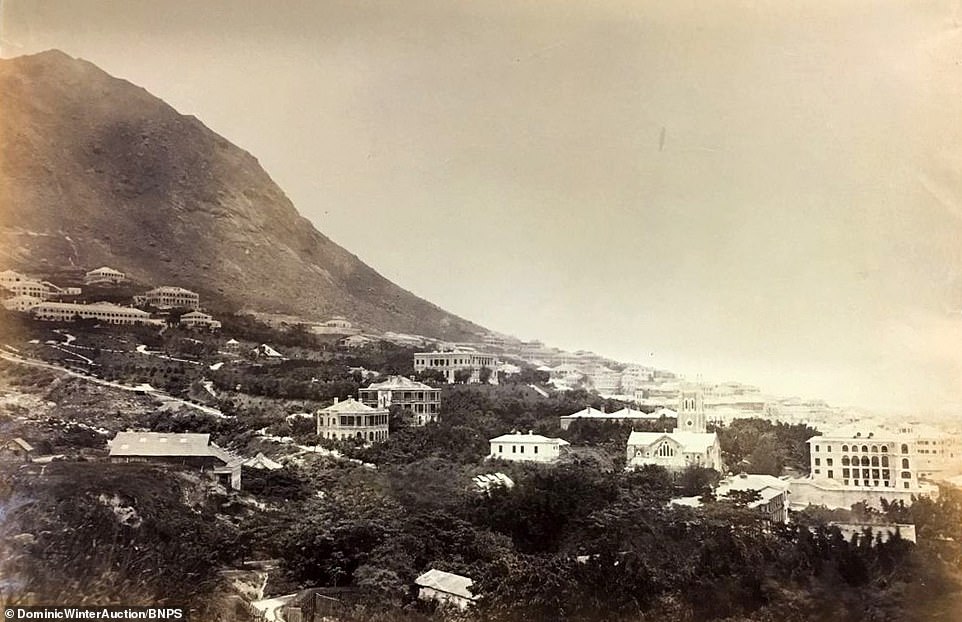 The view from ‘Scandal Point’, where British residents gathered to discuss the latest colony gossip 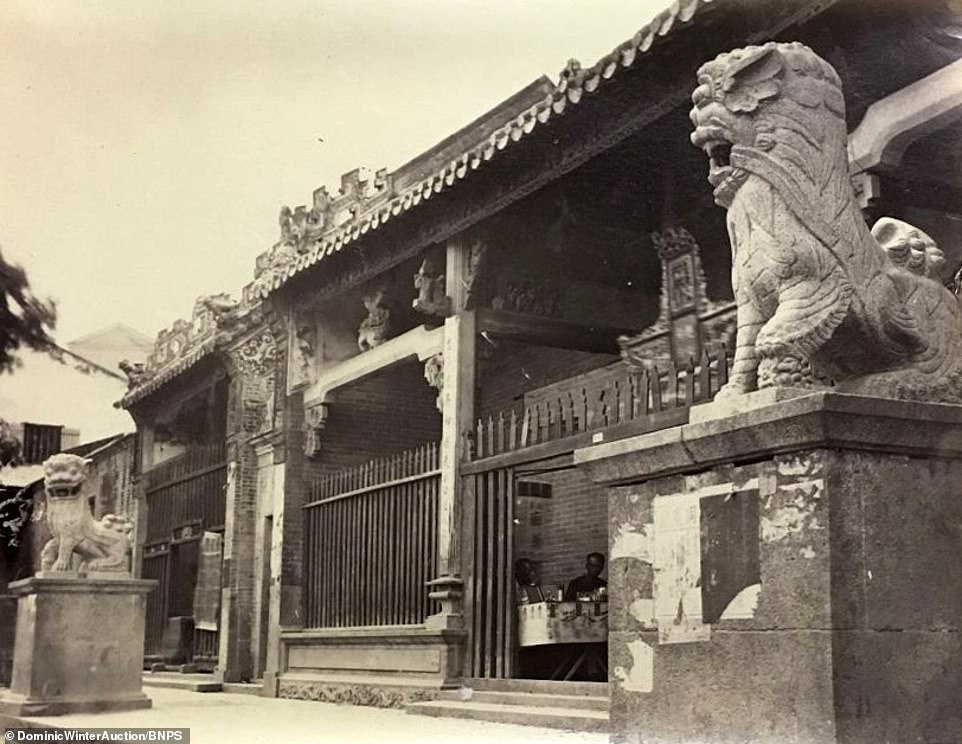 A so-called ‘joss house’ – Chinese temple – on Hong Kong Island. An old name in English for Chinese traditional temples is ‘joss house’. ‘Joss’ is an Anglicized spelling of the Portuguese word for ‘god’, deus 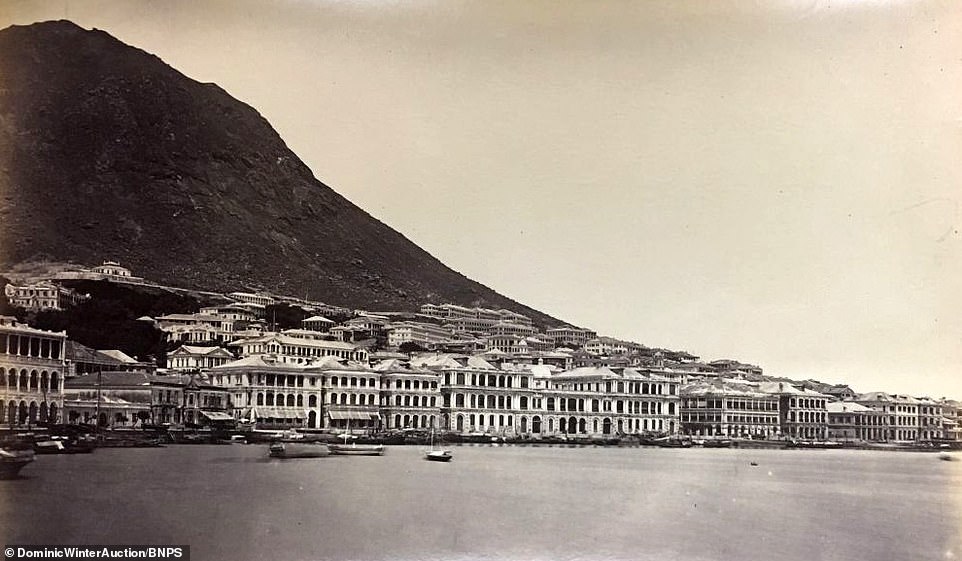 View westwards towards Victoria Peak. As early as the 19th century, the Peak attracted prominent European residents because of its panoramic view over the city and its temperate climate compared to the sub-tropical climate in the rest of Hong Kong. The sixth Governor of Hong Kong, Sir Richard MacDonnell had a summer residence built on the Peak circa 1868 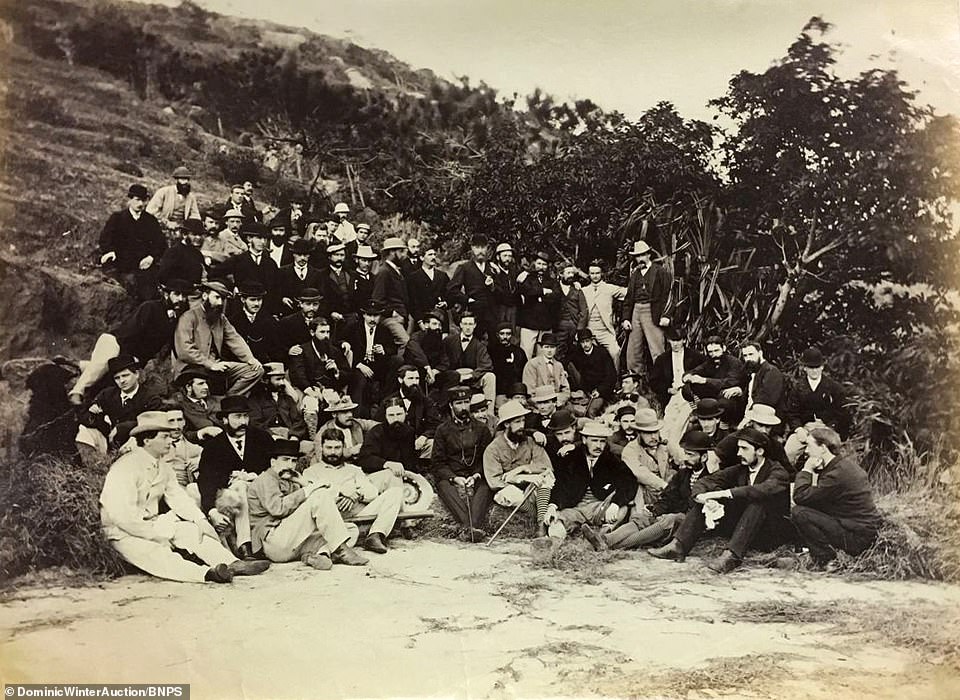 British men dressed in formal attire enjoy a picnic near Lin Tin, an island in the Pearl River estuary in the southeastern Chinese province of Guangdong

Photos capture the stunning views of Victoria Peak overlooking the city and panoramas of the relatively barren Hong Kong peninsula.

The Peak attracted prominent European residents due to its more moderate climate compared to the rest of Hong Kong.

A summer residence was built on the Peak for the sixth Governor of Hong Kong, Sir Richard MacDonnell, around 1868. The residents were carried up Victoria Peak’s steep slopes to their properties on sedan chairs.

Thomson photographed the botanical gardens, the famous Happy Valley race course and the city long before it became dominated by high-rise buildings. 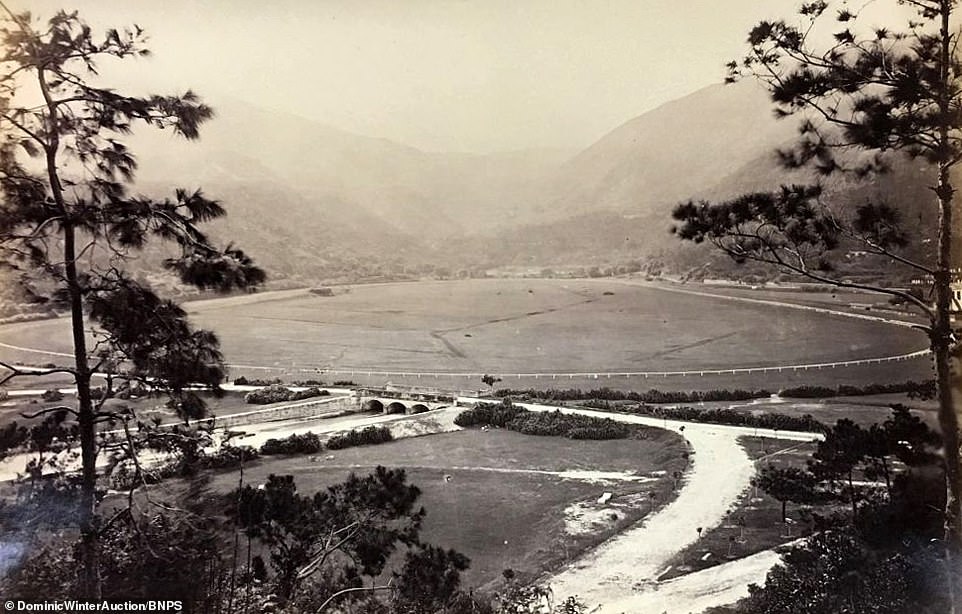 Happy Valley racecourse, which was built in 1845 to give the British a taste of home. It was built way from the more built-up areas of Hong Kong island but today it is surrounded by skyscrapers and remains a tourist attraction 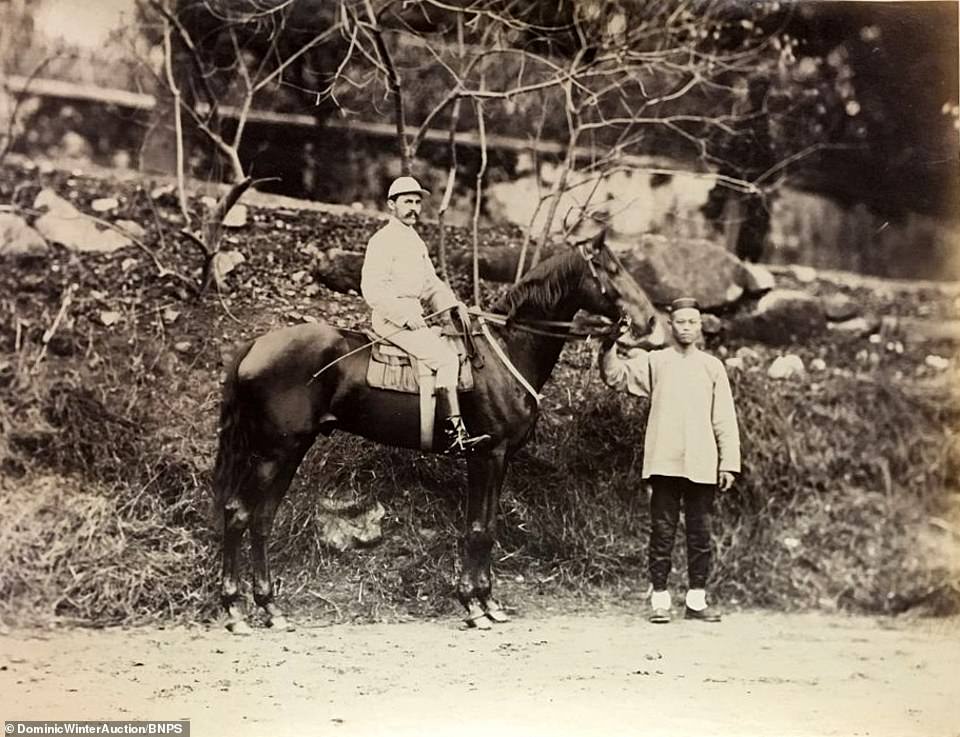 Pictured is the ‘Exeter’ winnder of the Hong Kong Challenge Cup in 1859. Horse racing was an early arrival in the booming settlement 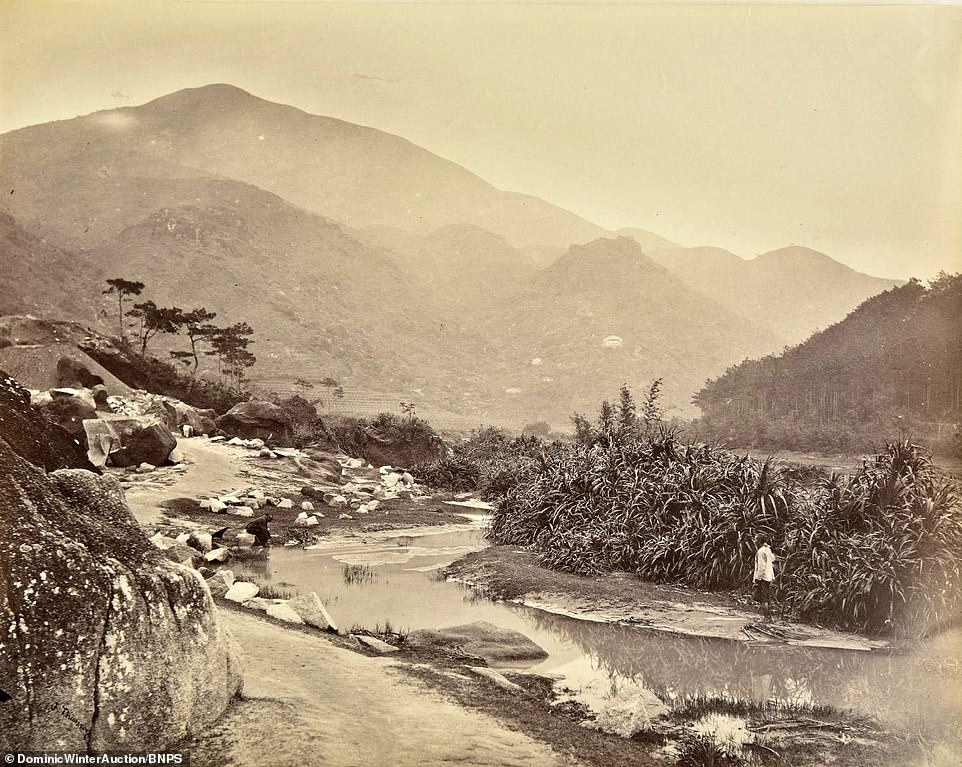 A rural idyll beside a brook in Happy Valley. In early 1840, the British Army set a military camp in the area. However, the camp was later closed due to the increasing number of soldiers succumbing to malaria

British forces established a military camp in the area in 1840, which was later closed due to high numbers of soldiers succumbing to malaria.

There was a high death rate in the area during early colonial days and the valley was also used as a burial ground for the dead.

Happy Valley racecourse was built in the Valley in 1845 to give the British a taste of home. It was constructed away from the more built-up areas of Hong Kong island but today it is surrounded by skyscrapers and remains a tourist attraction.

The area was previously swampland, but the only flat ground suitable for horse racing on Hong Kong Island.

There are snaps of Kowloon Ba, which is located at the east of the Kowloon Peninsula and north of Hong Kong Island.

One picture shows ‘Scandal Point’, which was given its name as locals would gather there and gossip about city life, while another captures Cochrane Street in a build-up area of Cantonese residents.

It was re-zoned in 1844 under the administration of Henry Pottinger to improve the hygiene condition of water supply. The Cantonese residents was later removed to Tai Ping Shan area. 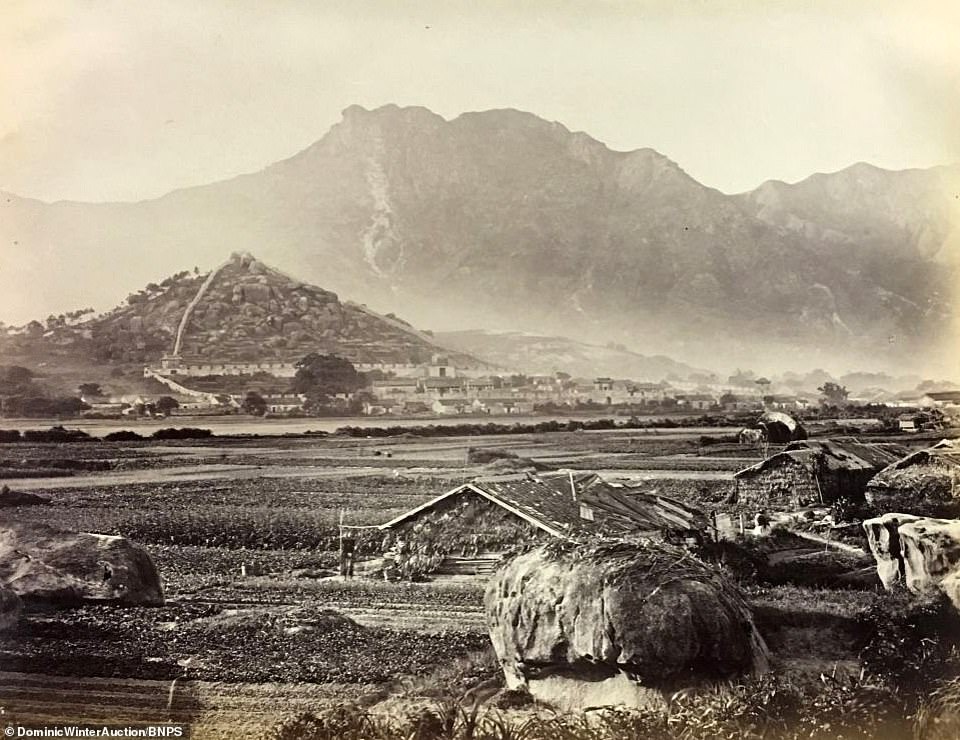 A rural scene across modern-day Kowloon, today the most populated urban area in Hong Kong, then a sparsely-populated rural landscape with farming huts dotted across the fields 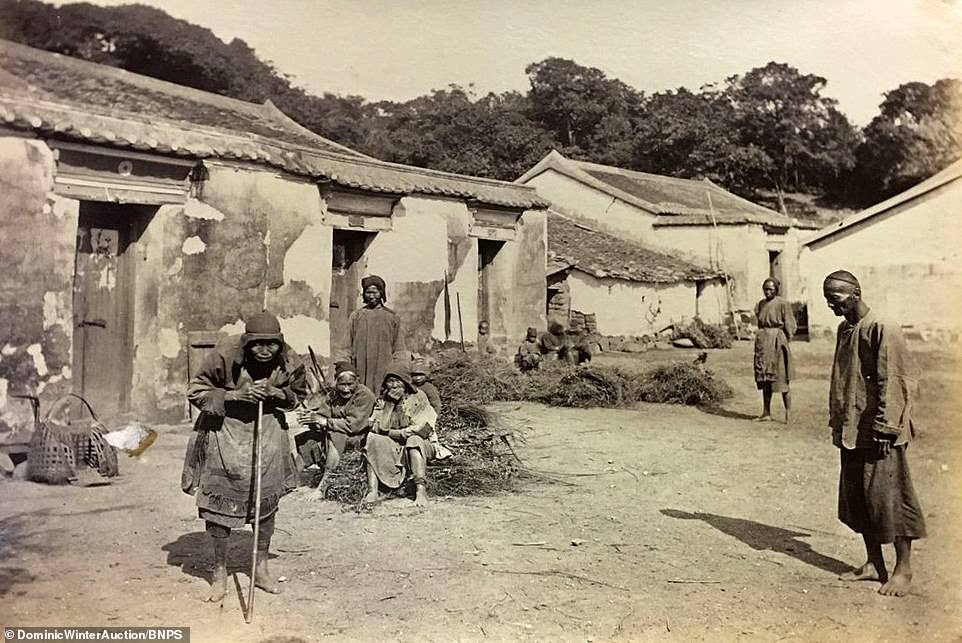 Locals sit outside a hut in a Chinese village. Only a few thousand people lived in Hong Kong when it came under British control in 1842, but that had risen to nearly 400,000 by the start of the 20th century and seven million by the 21st 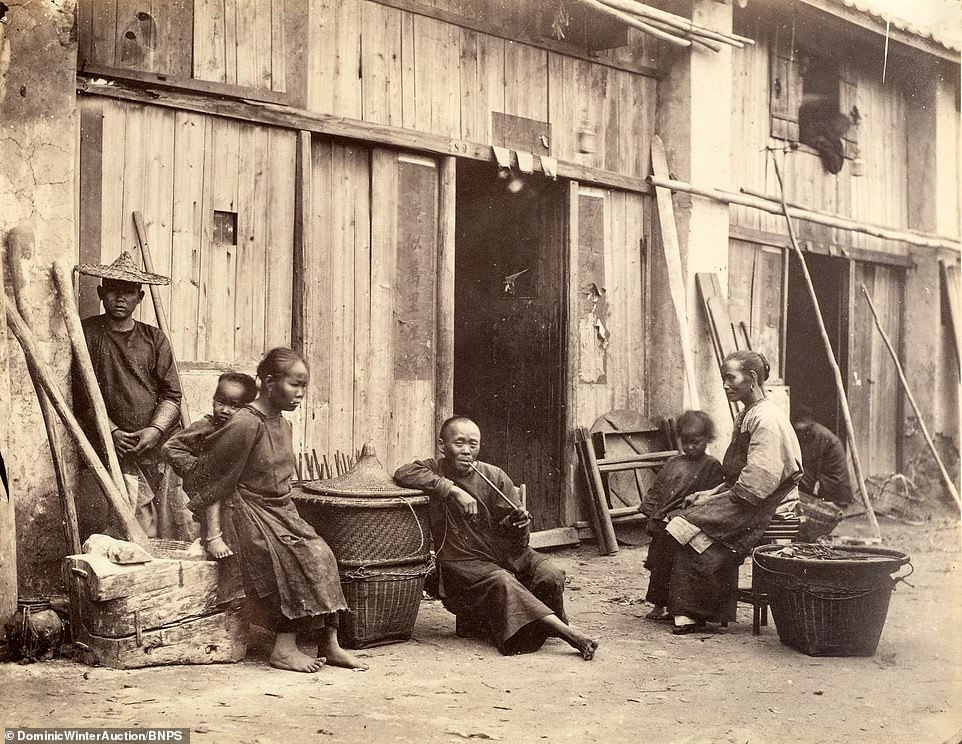 Residents sit outside their Chinese hut in Hong Kong. One man looks directly at the camera while the rest have their heads turned away

Thomson’s fascination with Hong Kong extended beyond its picturesque scenery to its industrious inhabitants.

He took images of natives on a Chinese junk and in a shop of exotic items, while villagers can be seen taking a break from work sitting together on a street.

Local residents are pictured sitting outside Chinese huts in Hong Kong. In one image, the man looks directly at the camera while the rest family have their heads turned away.

One photo shows a Chinese shop named ‘Wah Loong’ which imported goods from nearby Canton, also known as Guangzhou, and sold luxury items including silk, crape shawls and ivory. 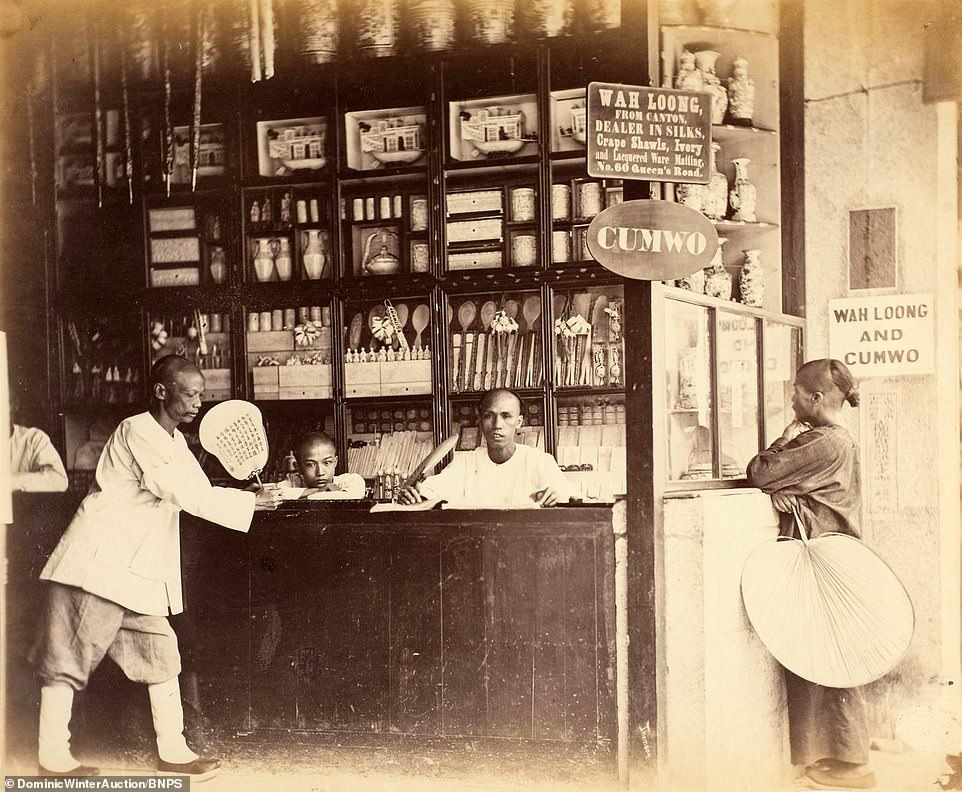 A Chinese shop ‘Wah Loong’ which imported goods from nearby Canton and sold silk, crape shawls and ivory 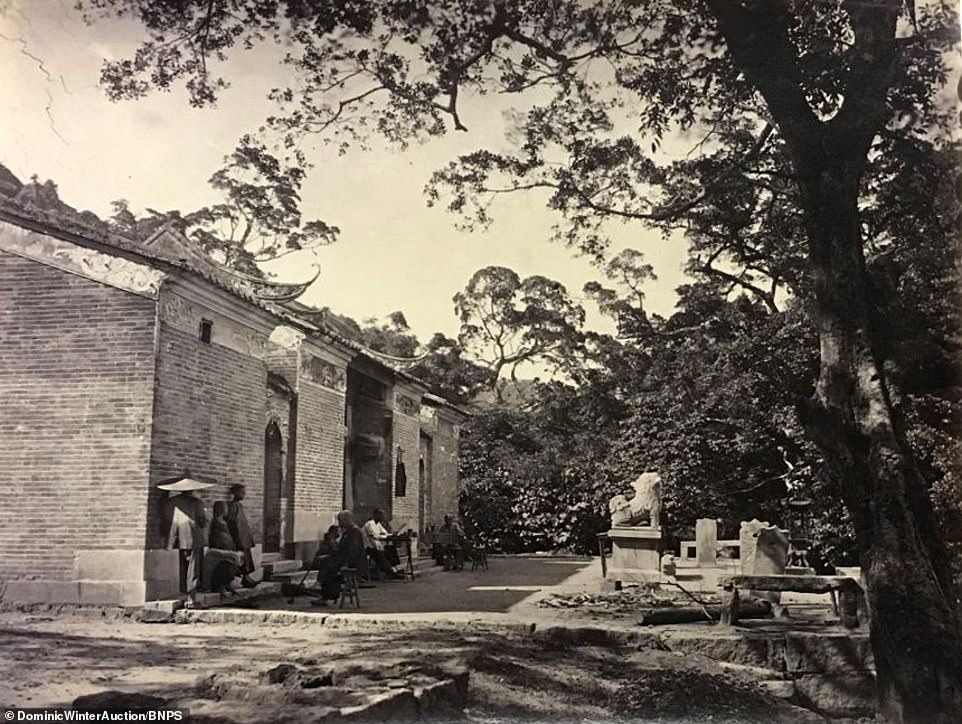 This picture shows a ‘joss house’, an old name for traditional Chinese temples which refers to the practice of burning incense or ‘joss sticks’ inside them. That name in turn is a corruption of the Latin ‘deus’, meaning God 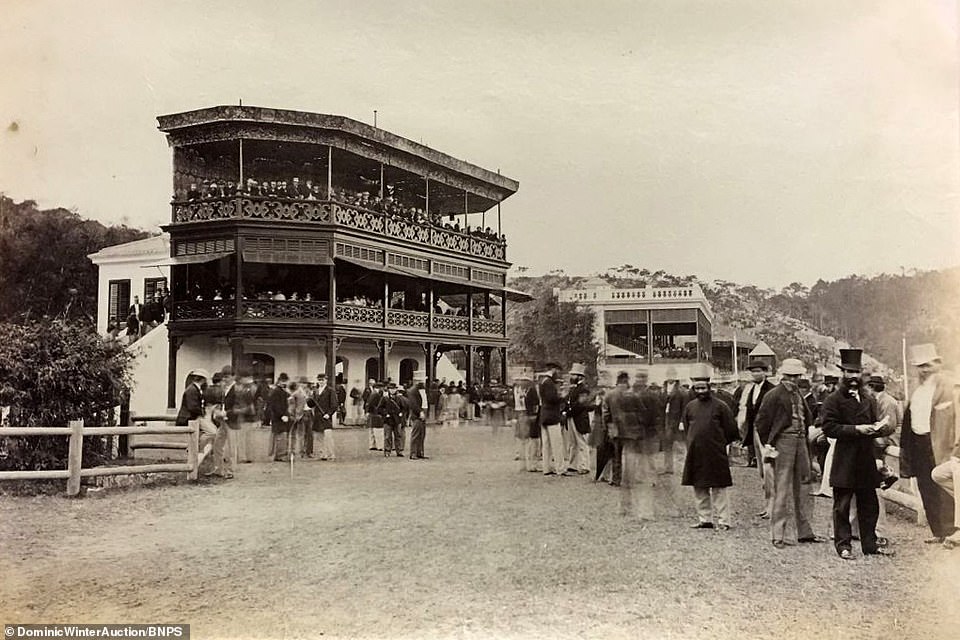 The photo album was collated by Hong Kong surgeon George Dods in the late 19th century, who like Thomson hailed from Edinburgh.

Thomson’s pictures are being sold by his descendants with auction house Dominic Winter, in South Cerney, Cirencester, and have emerged on sale for £15,000.

Chris Albury, specialist at Dominic Winter, said: ‘Thomson spent 10 years in the Far East recording a great body of work, which resulted in a unique record of ‘exotic’ societies and their monuments.

‘It is little wonder that these haunting images still capture the modern imaginations of collectors from the West and, increasingly, the East.

‘Thomson was equally adept at portraits as landscapes and the naturalness and beauty of his scenes and compositions make his works both compelling and expensive.’ 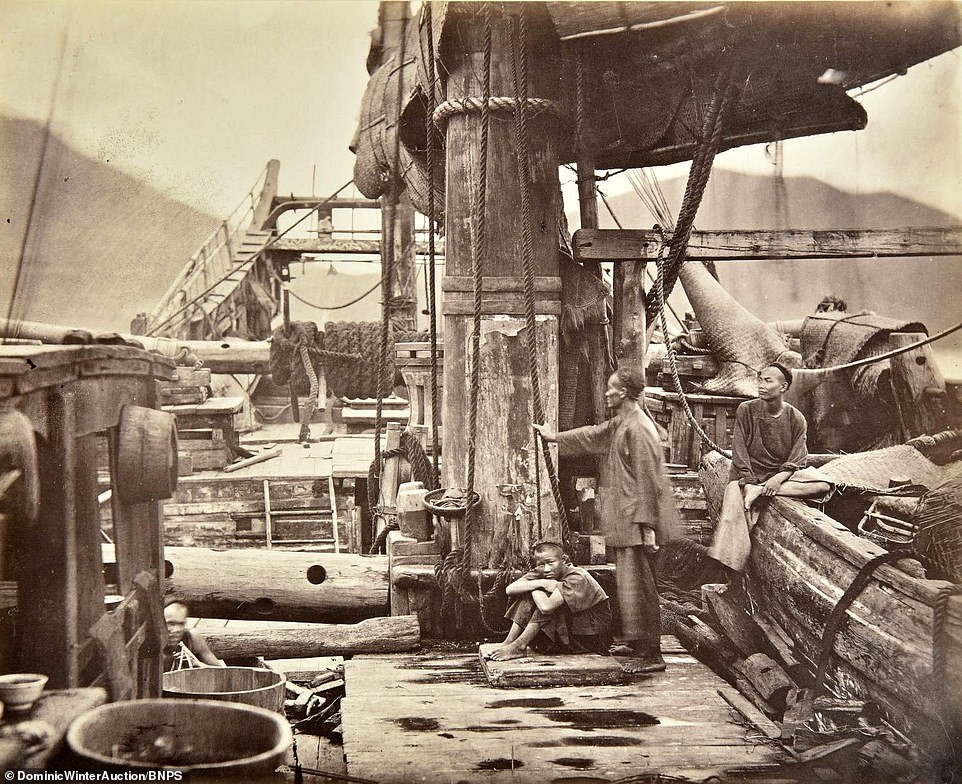 Locals aboard a junk, a type of Chinese sailing ship which has been used for hundreds of years. They were deployed against the British during the First Opium War that led to Britain taking control of Hong Kong 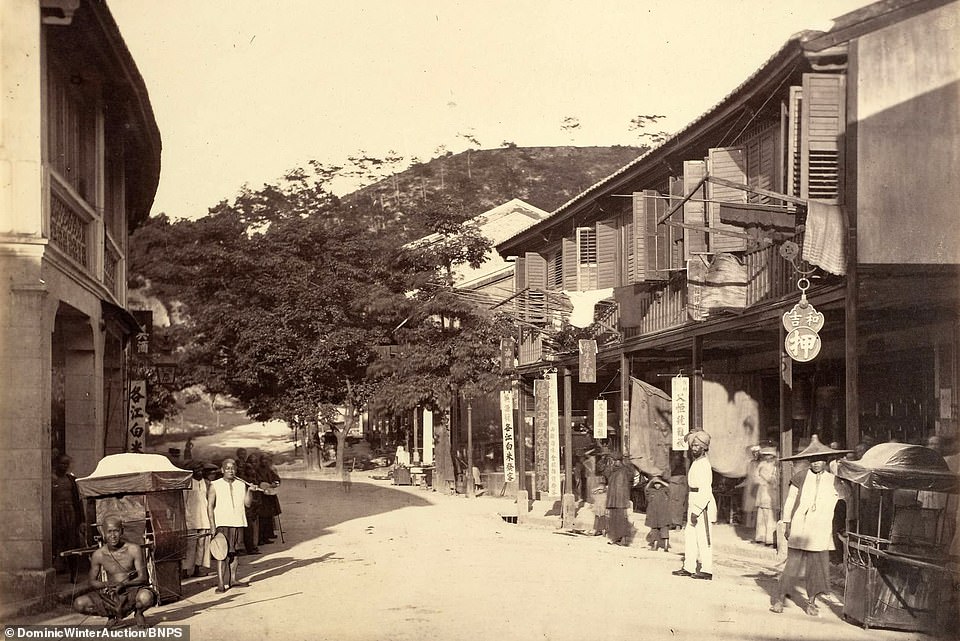 People walk along a street in Wanchai, once a fishing village which grew in population during British rule and has since become an urbanised area in the north of Hong Kong Island and a popular business and entertainment district 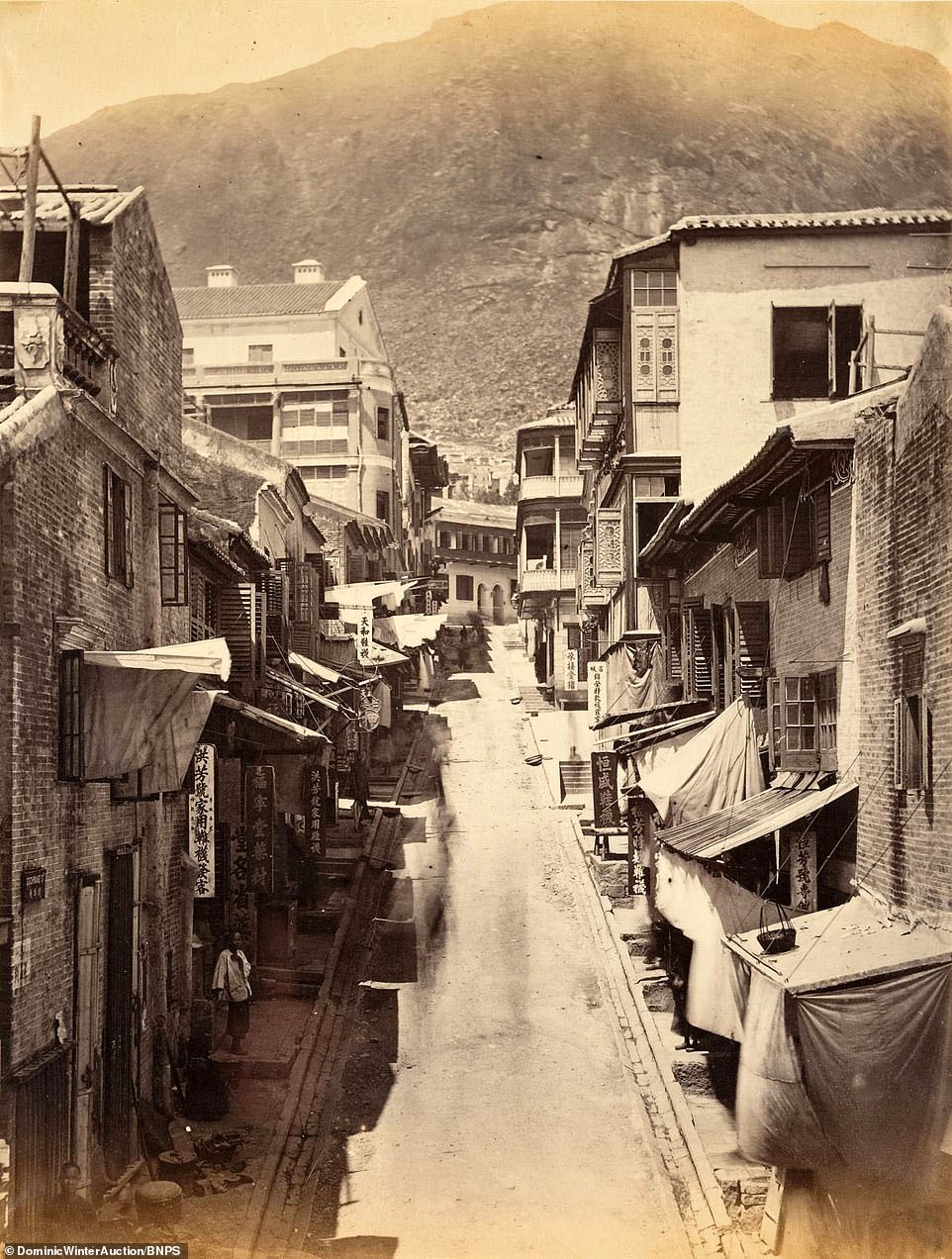 Hong Kong was ceded by The Qing dynasty to Britain in 1842 in the treaty of Nanjing, which ended the First Opium War.

It was occupied by Japan from 1941 to 1945 but otherwise remained under British rule until it was handed back to China in 1997.

The sale takes place on October 3.

The rare and fascinating images show Hong Kong in a more tranquil time, a far cry from the rioting city of today. 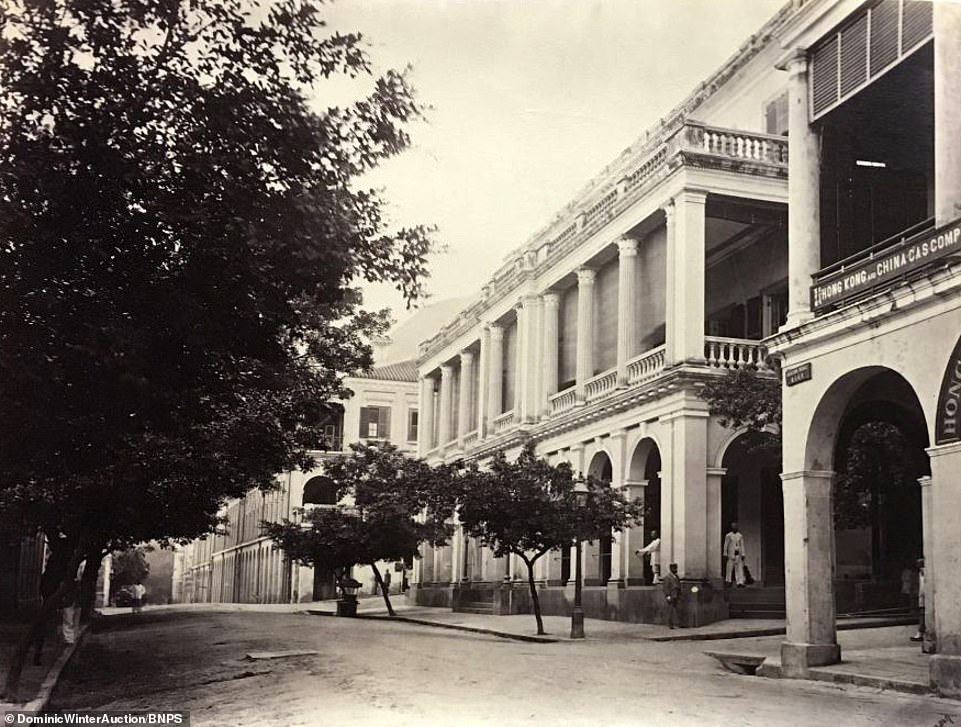 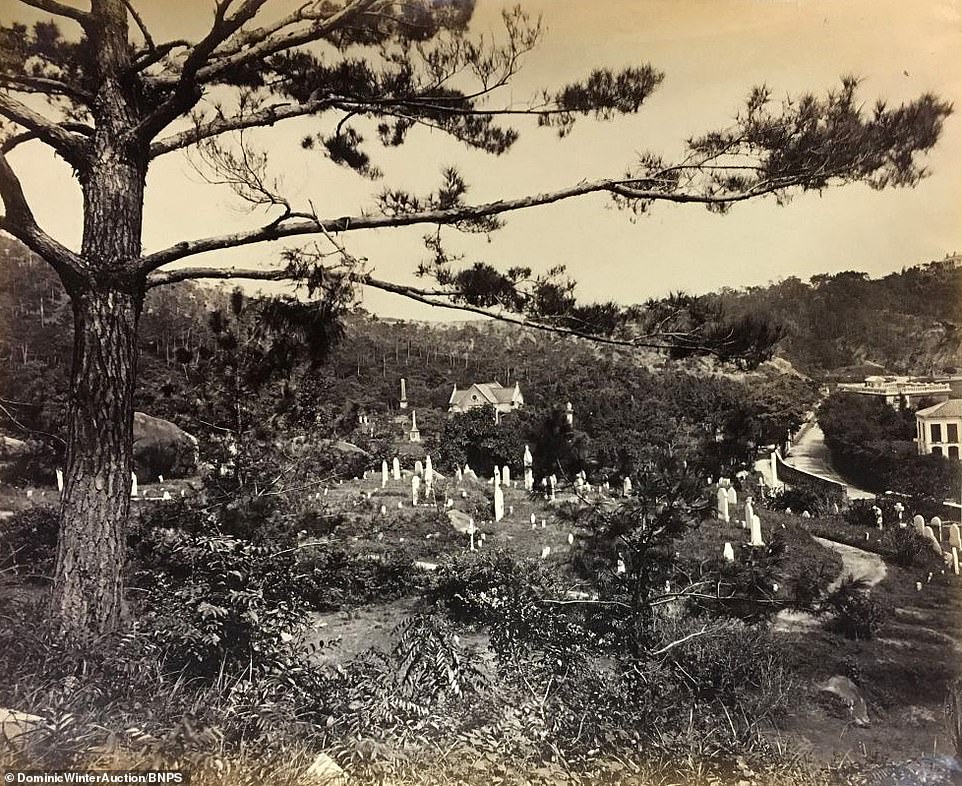 A British cemetery. The far eastern climate took a heavy toll on European settlers and there was a high death rate in the area during early colonial days

Hong Kong has been facing mass protests and civil unrest which were sparked in March by a now-scrapped plan to allow extraditions to the authoritarian mainland.

But they have snowballed into a wider movement calling for democratic rights and police accountability after Beijing and the city’s leader Carrie Lam took a hard line.

Pro-democracy activists have rallied in their thousands as the original protests transformed into continuing mass movements over the summer months and into autumn.