A ‘violated’ police officer has spoken out after a drunken yob called him Britney Spears before grabbing his crotch at a music festival.

PC Mark Walsh was on duty at the Victorious Festival in Portsmouth, Hampshire, when a 25-year-old man rubbed himself against the officer while pretending to have sex with him.

Mr Walsh arrested the London festival-goer for being drunk and disorderly and later disclosed the sexual assault in his witness statement.

The 34-year-old – an experienced public support unit officer – has spoken out in a bid to warn such assaults on anyone are unacceptable.

PC Walsh said: ‘When I arrested him he started to simulate we were having sex and was rubbing himself against me.

PC Mark Walsh, pictured, has spoken out after he was sexually assaulted by a 25-year-old reveller at the Victorious Festival in Portsmouth, Hampshire

‘Having someone grab you like that unexpectedly makes you feel violated and pretty powerless.

‘Everyone is so quick to judge and say what they would do if it happened to them like “deck the person” but that’s not a response we can take.

‘I was firm with him and expressly told him to stop. Policing is a risky job and there are expectations that you might get injured or assaulted.

‘Personally I think that it’s more of a risk than any other time than it has been in my 12 years of policing.’

The man was handed a conditional caution for the sexual assault on PC Walsh and for being drunk and disorderly.

He must now go on an alcohol diversion course and write a letter of apology to the officer.

PC Walsh now hopes to meet the man in a restorative justice process.

He added: ‘He seemed to think he can grope me and touch me like that.

‘In public life or in the private sector we shouldn’t have a culture where we go to work and expect to laugh off being inappropriately touched.’ 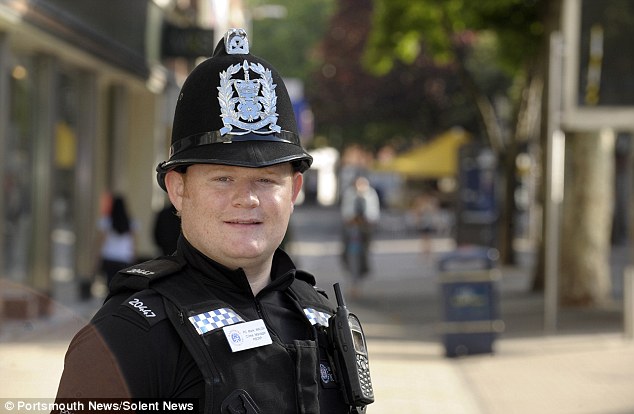 The festival-goer called Mr Walsh Britney Spears before grabbing his crotch. He then pretended to have sex with the officer and rubbed himself against him

Mr Walsh also spoke out about the sexual assault on Twitter, saying it should not just be laughed off because he is a man

PC Powling, a serving roads policing officer, said: ‘Any assault – whatever form of assault – on a police officer is totally unacceptable.

‘Socially I would imagine members of the public would think the same but in this case it’s extremely disturbing that someone thought it was acceptable to touch PC Mark Walsh in this way and think he could get away with it.

‘Fortunately he didn’t and is now full of remorse and fully accepts he shouldn’t treat an officer in this way and clearly won’t do it again.

‘He’s gained a criminal record from doing something like this.’

A Hampshire police spokesman added: ‘An attack on one of our officers or staff is an attack on all of us.

‘If someone is hurt while on duty, the impact is huge.’

Over the Bank Holiday weekend a police officer arrested a reveller at Notting Hill Carnival in west London for slapping his bottom.

Inspector Owen Pyle, who is a neighbourhood inspector for MPS Southwark, tweeted about the incident and called it ‘unacceptable’.

He wrote: ‘While dealing with an incident at Carnival yesterday a woman thought it’d be funny to slap my bum. She soon regretted it when I arrested her.

‘I don’t come to work to be sexually assaulted while doing my job. That kind of behaviour is unacceptable.’ 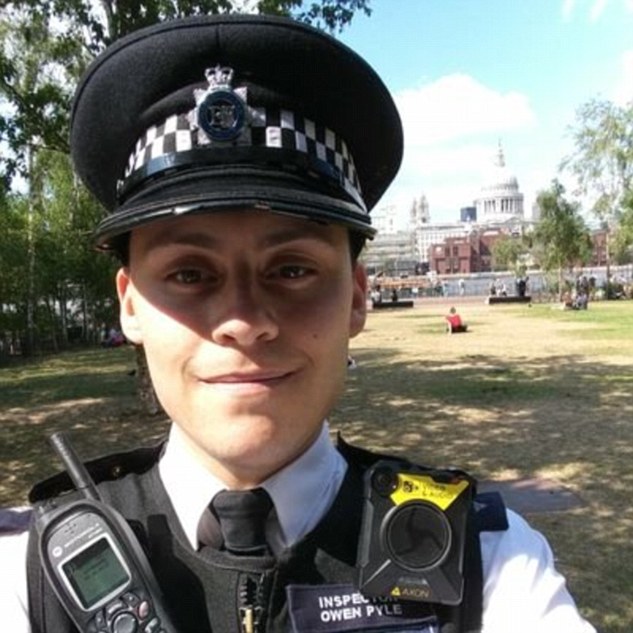 Inspector Owen Pyle, pictured, has also spoken out about being sexual assaulted while on duty at Notting Hill Carnival

Mr Pyle said the woman slapped his bottom, and added: ‘I don’t come to work to be sexually assaulted while doing my job’