Five men were stabbed and police were abused and spat at as violence broke out on Britain’s beaches yesterday – one of which ended with a 15-year-old being arrested.

Huge crowds of young people clashed by the seaside in South Wales, Kent and Exmouth on Thursday, with hundreds of people involved across the three sites.

Three men were stabbed near Bournemouth Pier as the beach was crammed with visitors yesterday, while fighting also broke out in Margate. 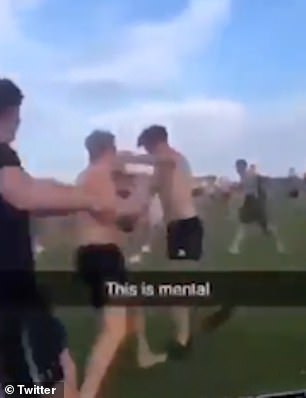 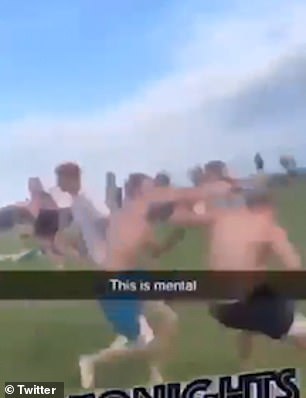 More than 100 youths scrapped on Ogmore-by-Sea beach on Thursday, in scenes described as a ‘contagion of stupidity’ by South Wales Police and Crime Commissioner Alun Michael

Violent scenes erupted in Ogmore-by-Sea, Bridgend in a brawl described as a ‘contagion of stupidity’.

South Wales Police urged parents to ‘check where your children are’ after reports of ‘large numbers of young people’ gathering.

Two men in their 20s were arrested and police say one person was injured.

Footage of the brawl sparked a backlash on social media as locals slammed piles of rubbish that were left behind. 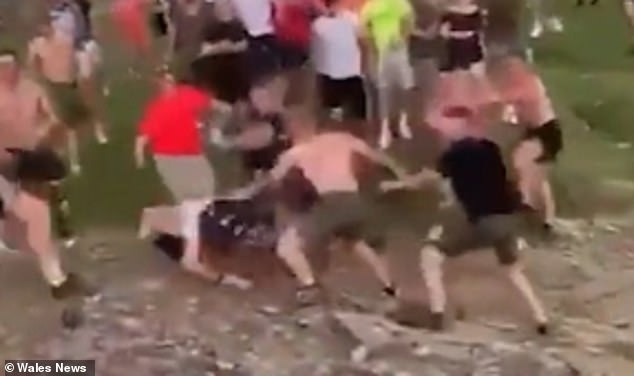 One wrote: ‘This is disgusting there wasn’t any need of this. You really should be ashamed of yourselves.’

Another said: ‘Disgraceful and by your actions now threatens a second wave and more lockdown measures! Great and thank you!’

Lockdowns rules in Wales say people can meet just one other household outside and should not travel outside their local area.

South Wales Police and Crime Commissioner Alun Michael described the scene as a ‘contagion of stupidity’ and said people were ‘completely ignoring the risk to public health’. 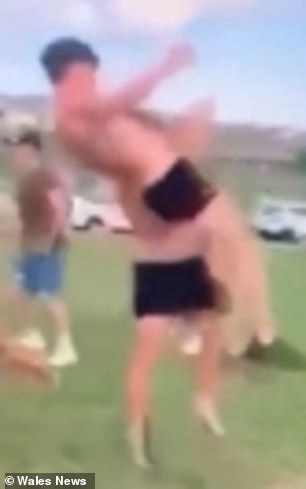 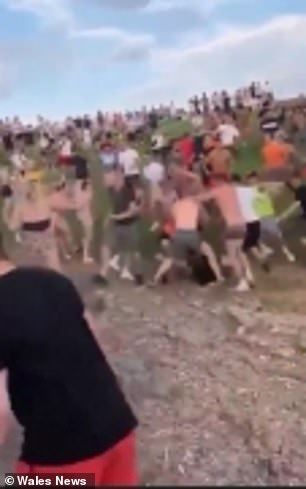 Footage from the brawl has been described as ‘disgusting,’ with one user saying those involved ‘should be ashamed’ 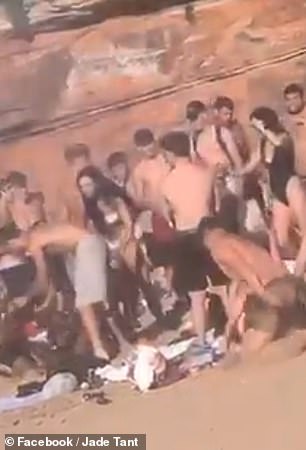 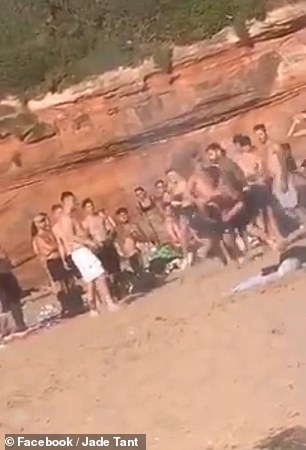 He said: ‘We need people to use common sense and that has been the characteristic in south Wales throughout the pandemic to date. It seems to becoming a bit apart.’

The violence came after similar scenes on the Isle of Sheppey in Kent on Thursday.

Two men were stabbed as coach loads of revellers were bussed onto the island for a party on Leysdown Beach.

Shocking videos show the scene as partygoers unwind on the hottest day of the year.

And emergency services were scrambled after two men, in their 20s, were stabbed.

Both victims were taken to a London hospital in a serious but non life-threatening condition and a 24-year-old man was arrested on suspicion of assault causing grievous bodily harm. 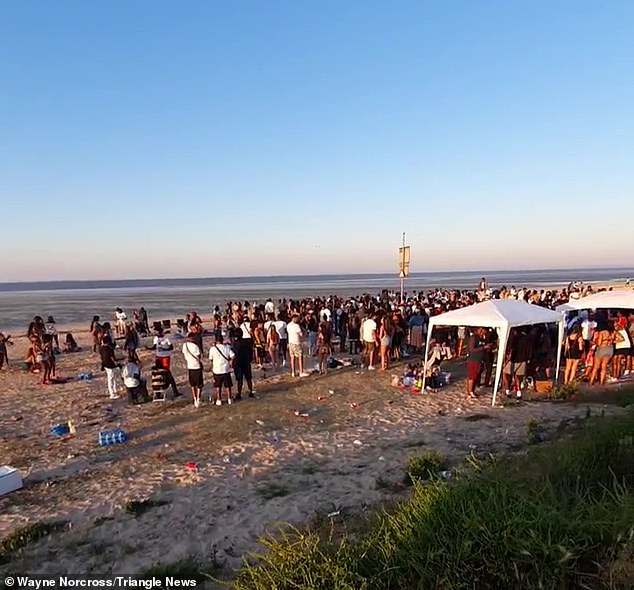 Two men were stabbed as coach loads of revellers were bussed onto the Isle of Sheppey for a party on Leysdown Beach. 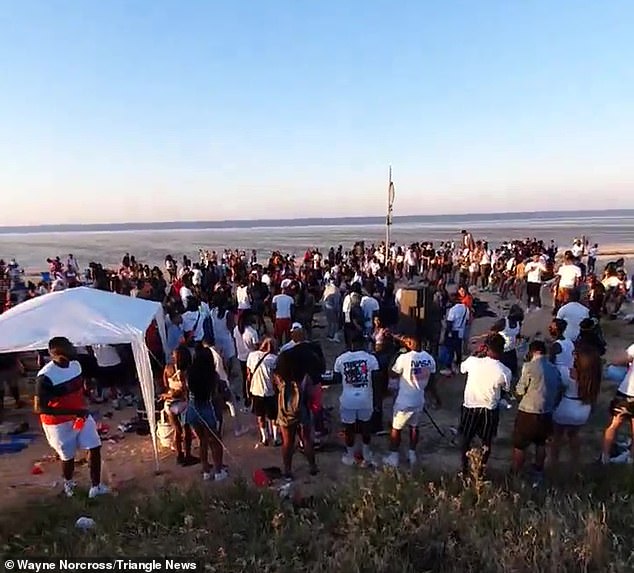 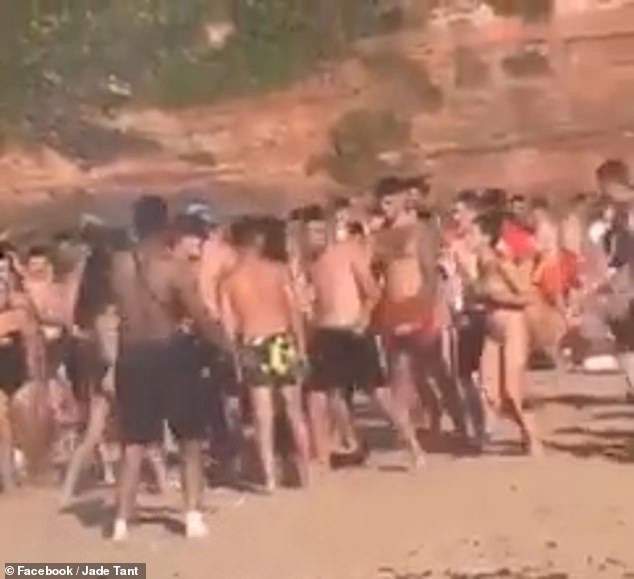 Around 50 people were thought to be involved in the violence on Exmouth beach on Thursday, following a larger brawl on Wednesday

Despite social distancing measures still being in place, a three-day event was advertised on the beach.

The organisers had security and a sound system for the ravers – who onlookers estimated to be in their thousands.

Wayne Norcross, 52, saw the revellers at around 7pm on Thursday, he said: ‘I saw cars parked everywhere by the entrance to the beach.

‘There were around two to three thousand people there. Coaches were driving into Sheppey and dropping people off.

‘You couldn’t get in or out because there were so many cars and coaches parked for the rave.

He said it was dispersed at around midnight by the thunderstorm.

However the night took a dark turn as two men were stabbed.

A police spokesman said: ‘A 24-year-old man was arrested on suspicion of assault causing grievous bodily harm and remains in custody.’ 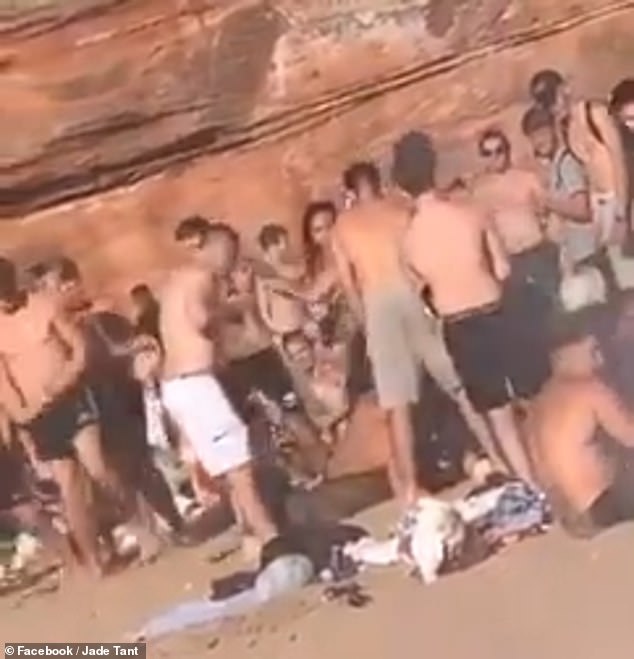 For the second consecutive day, violence broke out on Exmouth beach, with a 15-year-old arrested 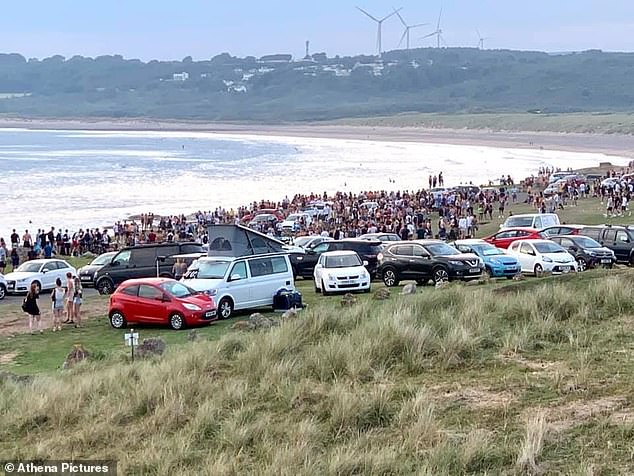 Smashed bottles and laughing gas canisters were strewn across the beach after the rave at Leysdown, on the Isle of Sheppey in Kent.

Elsewhere in Kent, a fight broke out in Margate, on Thursday between two groups of girls.

Footage from the beach in North East Kent shows a large crowd gathering to try and arguing between two groups of people.

Police have stepped up patrols around Bournemouth Pier after three men in their 20s were stabbed last night.

All three victims, who had travelled to seaside from London, were taken to hospital.

One was stabbed in the back, another in the face and the third in the chest and arm. None of their injuries are described as life-threatening.

Neighbourhood Inspector Jon Wasey, of Bournemouth police, said: ‘I would continue to stress that we are asking people listen to the Government advice and if the beach is busy and you can’t socially distance, please go home to protect our NHS.’

Around 50 youths were involved and a 15-year-old boy from Exeter was arrested on suspicion of being drunk and disorderly.

Yesterday, police were called to a large scale punch-up on the beach involving a crowd of youths. Later, a 20-year-old man from Exeter suffered serious head injuries in an incident near Exmouth train station that police believe was linked to the earlier incident on the beach.

Now, police have confirmed trouble flared up at the beach again last night.

‘Officers attended the incident at Orcombe point where a group of up to 50 youths were fighting. Whilst in attendance, officers were verbally abused and spat at.

‘A 15-year-old boy from Exeter was arrested on suspicion of being drunk and disorderly in a public place. He was taken into custody and later released under investigation pending further enquiries.