A couple driven to the brink of divorce by their struggle to control their eight-year-old son’s violent rages were finally able to reconnect after getting to the bottom of his behaviour issues – with a little help from his drawing book.

Adrian, 46, and wife Emma, 37, who live on Barry Island, South Wales, parents to Sorel, 11, and eight-year-old Ioan, told how his outbursts often turned bedtime into a six hour-long ordeal.

His aggressive behaviour often saw him lashing out at his parents, kicking, biting and punching until they were covered in painful bruises and teeth marks.

Child psychologist Laverne Antrobus, who visited the family for Tuesday night’s episode of Channel 5’s Violent Child, Desperate Parents, was astonished when she witnessed how Emma resorted to physically restraining her screaming son in a bid to calm him down.

Laverne told Adrian and Emma how an important key to understanding Ioan, who has a developmental age of three, lay in his drawings of his family, which showed him standing between his parents, with his mother looming large and his father at a distance.

The psychologist explained how it indicated that Ioan was ‘stuck’ in a developmental phase where ‘mummy belongs to me’, and told the couple it was essential they work as a team to bring his behaviour under control. 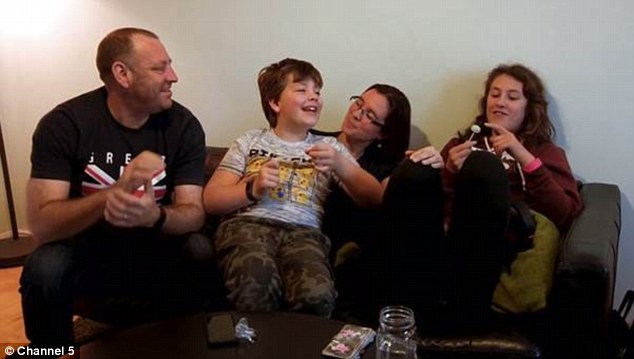 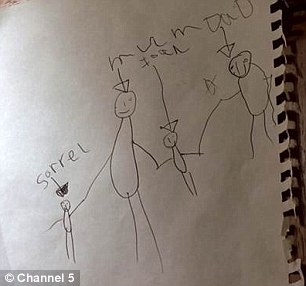 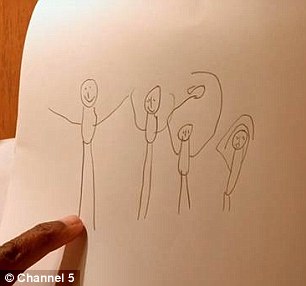 Before the family put Laverne’s new rules into place, Ioan drew his family with him at the centre, with his mother looming large and his father on the fringes (seen left). But after weeks of following a new approach, Ioan no longer placed himself in between his parents (seen right)

One of Ioan’s drawings up on the wall showed him standing between his parents, and not only had he drawn his mother larger than his father, he had made her central to the family by sketching his father at a distance – almost at the edge of the drawing paper.

Laverne explained what it implied: ‘He is stuck in a developmental phase where “mummy belongs to me and daddy can sit in the corner”.

‘I know as a psychologist it is pretty much part of the deal that a very young child closely allies with a parent of the opposite gender.

‘That is absolutely ordinary, but what seems to have happened in this family is that you haven’t been able to help him get out of that,’ she told the parents.

Ioan was well-behaved at school but at home it was a different story, with the eight-year-old screaming and shouting for his mother for hours on end.

His parents explained that he had destroyed their home, banging doors so hard he left holes in the wall, and jumping up and down so ferociously that a radiator came loose from its fixtures. 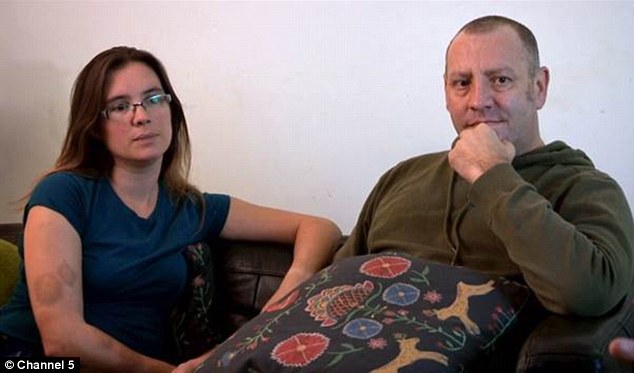 Adrian and Emma were at the end of their tether with their violent son Ioan and were desperate for help, Emma shows off her visible bruising from her son 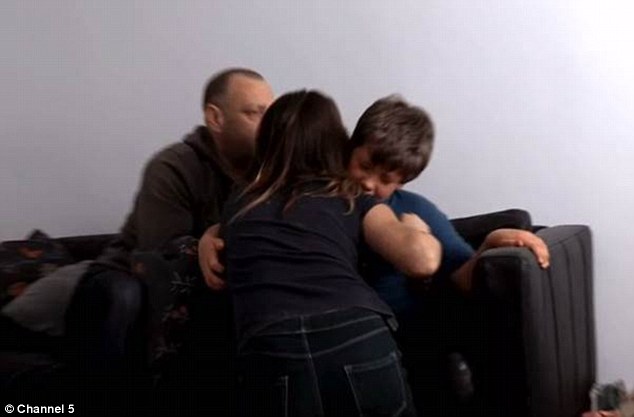 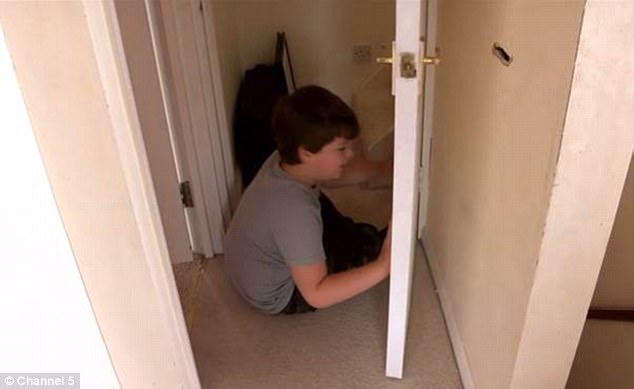 When Laverne arrived at the family home in the programme, which sets out to help parents struggling to manage their difficult children, she watched as Ioan had a meltdown when he was asked to turn the volume down on the TV.

He immediately launched an attack when his mother tried to calm him down, biting her on the shoulder which left her in tears.

Later, when Emma attempted to tuck him into bed, he had another violent episode, prompting Emma to wrap her arms and legs around him to gain some control – a move that concerned Laverne.

‘I have very rarely seen a parent use this level of physical restraint – it’s far too physical and I can’t see how it helps with Ioan’s behaviour,’ she said.

‘Ioan is being restrained and that feels completely wrong to me and in fact he is more violent because of it,’ she added. 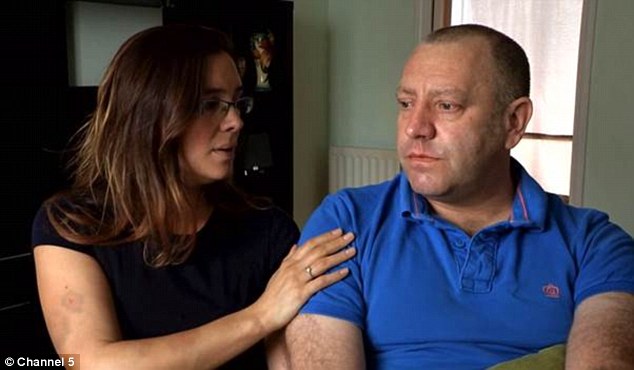 The divided couple admitted they had been left feeling broken and defeated by their son’s temper tantrums.

‘We are struggling in so many ways and it has caused so many arguments, we don’t know if we can carry on,’ Emma said.

Laverne issued new rules for the parents to follow – the most important being to unite as one and deal with Ioan as a team.

‘Adrian needs to be upstairs helping Emma, to show him he has two parents,’ she said.

‘He needs to see you as a couple – he needs to know that his coming in between you is coming to an end.

‘If you carrying on letting him your marriage will come to an end,’ she said.

Emma took a backseat to allow Adrian to form a closer bond with his son, who in turn had the opportunity to spend time with his father – and to learn that he had two parents, and not one.

The new regime improved Ioan’s behaviour so much that the couple were able to leave the children at their grandparents and enjoy a date for the first time in years. 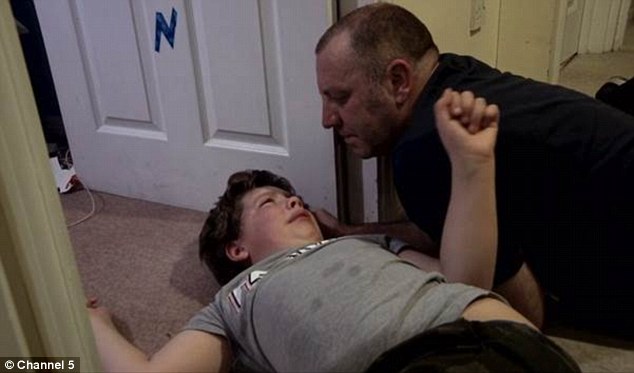 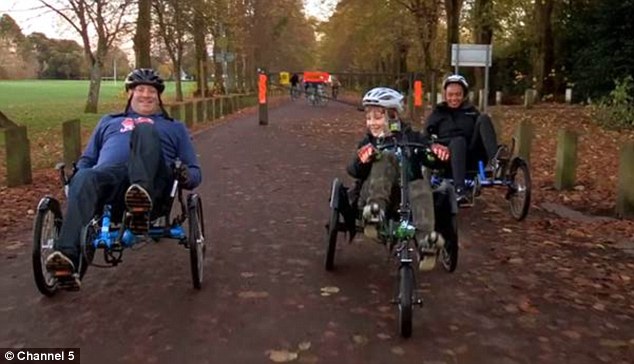 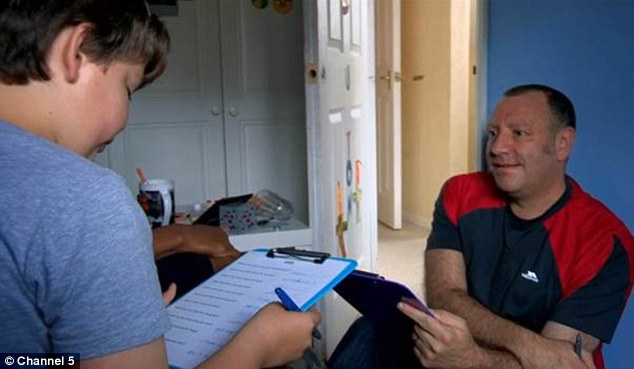 They learn more about each other and bond without Emma being there, which helps Ioan to understand his father’s role in the family

After facing Ioan’s problems head on the family had a renewed sense of passion for wanting to help him develop and grow.

Instead of letting him stay in his room for hours on end staring at a computer they took Ioan outdoors to take part in physical activities.

The youngster began to learn how to ride a bike and started swimming lessons with his father alongside him. 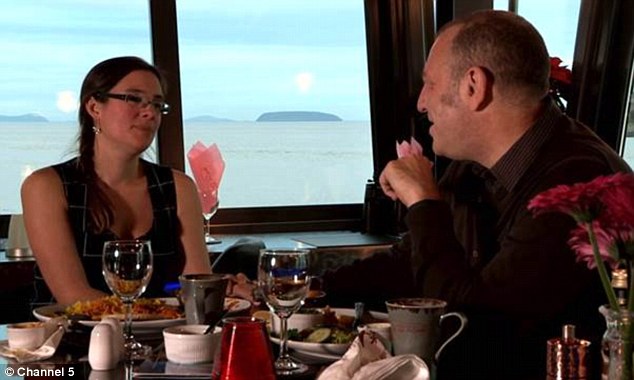 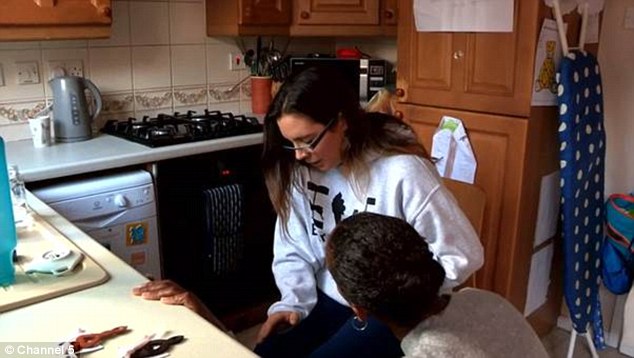 After nearly two months of the new regime Laverne returned to the family to show them old footage of Ioan’s violent outbursts.

Revisiting the traumatic moment was too much for Emma who was so distressed at the sight of her restraining her child she had a panic attack, and vowed never to do it again.

‘I just can’t believe how bad it was. Seeing him like that… we were making matters worse,’ she said.

‘We are not doing that to him again.’

Laverne had even more good news, after asking Ioan to draw another picture, this time reflecting how he saw his family now.

‘Children’s drawings are often quite illuminating and I’ve noticed every time I came into the house it really tells how Ioan has felt, needing to be between the two of you,’ she explained.

Revealing the new piece of artwork Laverne said Ioan had started with his father, then mother, adding his sister Sorrel and then himself.

‘He’s put himself with his sister and left you two together.

‘He’s no longer feeling like this, [a] developmentally and emotionally delayed young boy who has to somehow get his way in between his mum and dad, he can just be himself.’

WHAT CAN YOU LEARN FROM CHILDREN’S DRAWINGS?

Child psychologist Laverne Antrobus explains that the content of children’s drawings can be quite ‘illuminating’.

Their artwork often reflects how they are feeling and more often than not they do not censor what they draw.

It can give psychologists and insight into their point of view of the family and what they see their role as.

In the Channel 5 series Violent Child, Desperate Parents, Laverne dealt with a family who were struggling to cope with their eight-year-old son’s violent outbursts.

A drawing made by Ioan showed he saw his role cemented between his mother and father – with his father appearing in the distance almost off the page.

Laverne explained that it implied: ‘He is stuck in a developmental phase where “mummy belongs to me and daddy can sit in the corner”.’

However, after the parents paid attention to working as a unit together to deal with their son’s behaviour instead of letting him divide them, there was a significant change.

Revealing the new piece of artwork Laverne said Ioan had started with his father, then mother, adding his sister Sorrel and then himself.

‘He’s put himself with his sister and left you two together.

‘He’s no longer feeling like this developmentally and emotionally delayed young boy who has to somehow get his way in between his mum and dad, he can just be himself.’