The former hitman accused of beating Whitey Bulger to death in prison had a reputation for extreme violence as he rose through the Mafia’s ranks in the 2000s.

Fotios ‘Freddy’ Geas, 51, was serving a life sentence for the murders of Gary Westerman and Adolfo ‘Big Al’ Bruno when he allegedly helped beat Bulger to death with a lock in a sock and partially gouged out his eyes with a shiv on Tuesday.

Those who knew Geas described him as a feared killer around his hometown of Western Springfield, Massachusetts, who was prone to outbursts of violence and operated alongside his younger brother, Ty. 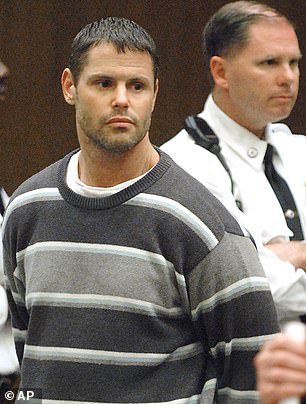 Fotios ‘Freddy’ Geas, now 51 (pictured left and right in the late 2000s), is the former mob muscle-man suspected of beating Whitey Bulger to death in prison on Tuesday 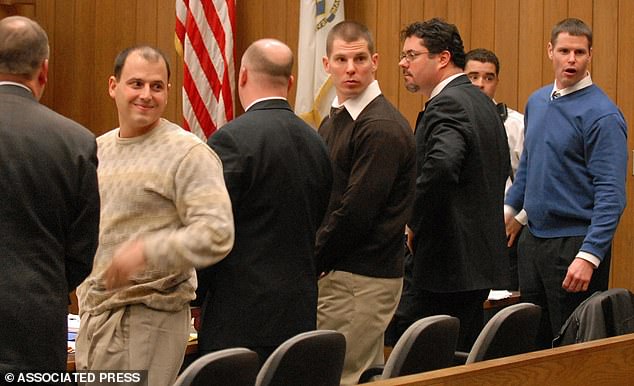 Being Greek, the pair grew up outside of Mafia circles but quickly became associated with organised crime following their first convictions.

Those came in 1989 when, aged just 17, Ty Geas fired a rifle into the air during a brawl at a high school hockey game and was sent to jail, Mass Live reports.

Freddy, then aged 22, exhibited what would become a lifelong hatred of ‘rats’ when he threatened to murder a witness against his brother, and was also jailed.

While inside, Ty met and befriended Anthony Arillotta, and up-and-coming Mafia figure who recruited the brothers as ‘muscle’.

Over the course of the next two decades the brothers went to work for Arillotta, racking up a total of 75 convictions between them by the late 2000s, including beatings, vandalism, and robbery.

They were never inducted into the Mafia themselves, because all ‘made’ men must have Italian blood, but were known as Arillotta’s close associates.

Indeed, the brothers helped the aspiring Arillotta ascend through the ranks of the Mafia by whacking his enemies and rivals within it.

On the night of November 4, 2003, the pair murdered Arillotta brother-in-law, their former friend and low-level criminal Gary D Westerman because they correctly suspected he was a ‘rat’.

They carried out the murder by luring Westerman to what he believed was a marijuana stash-house with the promise they were going to rob it. 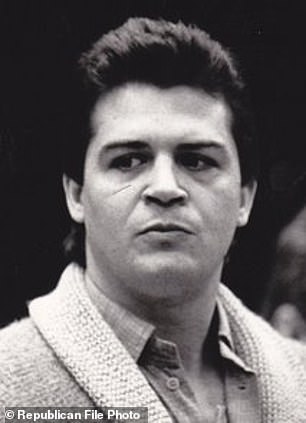 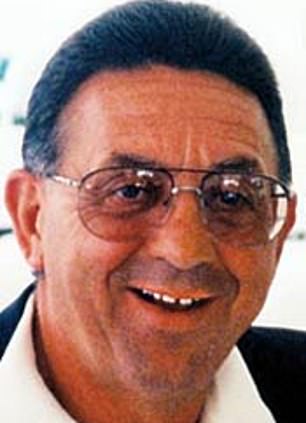 In 2003 Geas murdered Gary D Westerman (left), Arillotta’s brother-in-law, by shooting him in the head and beating him with shovels. A few weeks later he ordered a hitman to take out Adolfo ‘Big Al’ Bruno (right), who was shot repeatedly in the head and groin

Westerman showed up with a ski mask and a stun gun ready for the raid, but was instead shot twice in the head by the Geas brothers.

The pair then attempted to drag his body to a freshly-dug grave in the back yard, but Westerman somehow survived the bullet wounds and broke free.

Not to be deterred, the murder team – which included Arillotta and another associate, Emilio Fusco – beat him to death with shovels and buried him.

Just a few weeks later Freddy Geas was told to whack Adolfo ‘Big Al’ Bruno, Arillotta’s boss, who he wanted out of the way because he was not making enough money, and out of suspicion that he was also an informant.

After getting permission for the murder from high-ranking mob boss Arthur Nigro, the task was passed to Geas. 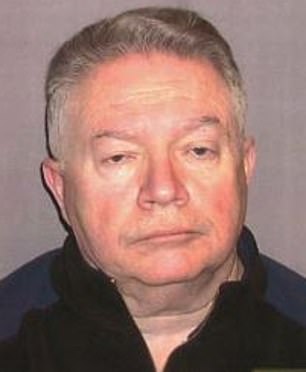 Geas and his brother were offered the chance of a reduced sentence in return for informing on mob boss Arthur ‘Artie’ Nigro (pictured), but flatly refused

Rather than carry out the killing himself, Geas paid hitman Frank Roche $10,000 to take out Bruno.

On November 23, Roche walked up to Bruno as he was leaving the Our Lady of Mount Carmel club in Springfield and called out his name.

When Bruno turned, Roche shot him six times in the head and groin, killing him.

Geas also acted as the getaway driver in the attempted murder of Bronx union boss Frank Dabado, who was shot nine times in the same year, but survived.

Nigro had ordered that Dabado be killed after the pair got into a fight over some Tony Bennett concert tickets.

However, the criminal enterprise fell apart when both Roche and Arillotta turned informant in order to bring down the Geas brothers and Nigro.

Prosecutors did attempt to flip Freddy Geas, but according to his defense lawyer Daniel D. Kelly, he simply refused.

‘He didn’t even blink an eye. He didn’t flinch. He just said no,’ Kelly said.

The trio were put on trial and in 2011 were each given life sentences for their parts in the murders of Westerman and Bruno, as well as a host of other charges including racketeering.

On Monday, three inmates at US Penitentiary Hazelton in West Virginia dragged a wheelchair-bound Bulger into a corner and killed him.

According to reports, the men attempted to gouge his eyes out with a shiv and beat him over the head with a lock in a sock. 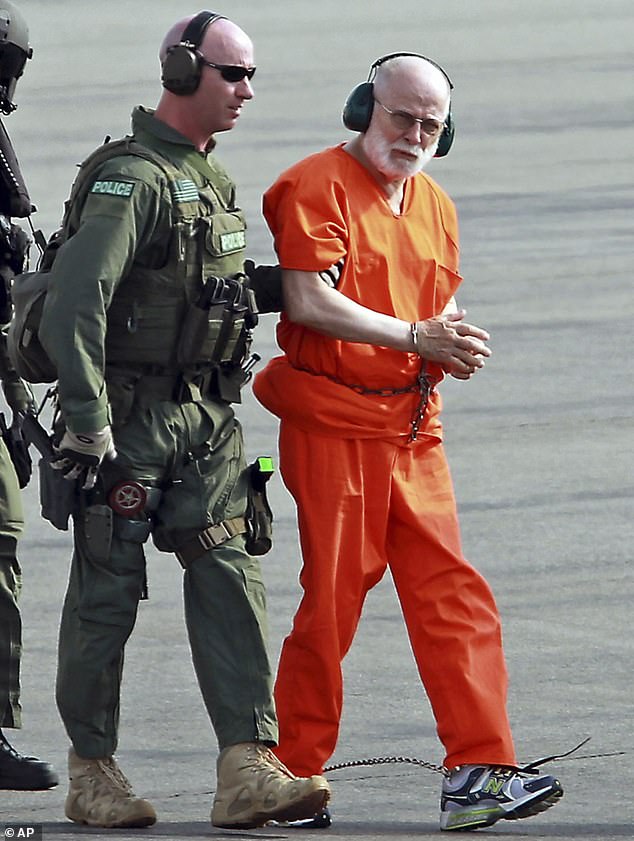 Geas is suspected of instigating the death of James ‘Whitey’ Bulger (pictured in 2011) in prison on Tuesday. The former gang boss was beaten to death with a lock inside a sock 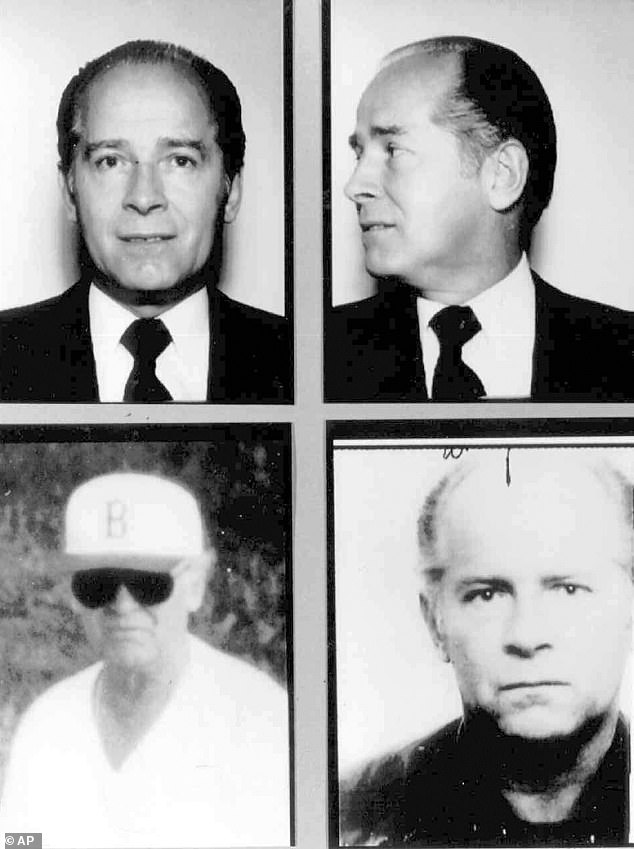 Geas’s name quickly emerged as a potential killer, and according to the Boston Globe he has not denied his role.

He has also refused to help prison officials identify his co-conspirators.

Among potential suspects are Paul Weadick, 63, was sent to Hazelton this summer after his murder conviction alongside Francis ‘Cadillac Frank’ Salemme – Bulger’s co-defendant in a sweeping federal racketeering indictment in 1999.

Salamme and Weadick were convicted in June of the 1993 murder of Steven DiSarro, a nightclub owner in South Boston.

Bulger’s right-hand man, Stephen ‘The Rifleman’ Flemmi, was the star witness in the prosecution of Salamme and Weadick – though Flemmi also testified against Bulger himself in 2013.

Bulger was one of the FBI’s most wanted fugitives for 16 years until his 2011 arrest in Santa Monica, California.

His 2013 trial, which featured 72 witnesses and 840 exhibits, produced chilling testimony worthy of a pulp novel.

It heard harrowing tales of teeth being pulled from the mouths of murder victims to foil identification and the strangulation of a mobster’s girlfriend who ‘knew too much.’

The Federal Bureau of Prisons said in a statement Tuesday: ‘Life-saving measures were initiated immediately by responding staff. Mr. Bulger was subsequently pronounced dead by the Preston County Medical Examiner.’

The BOP said that no other staff or inmates were injured and that an investigation was underway.

In a statement, Bulger’s lawyer J.W. Carney Jr blasted the prison system over the mobster’s death.

‘He was sentenced to life in prison, but as a result of decisions by the Federal Bureau of Prisons, that sentence has been changed to the death penalty,’ he said.