A woman has shared a shocking video of an angry mother berating her for being ‘half naked’ at a local park because her sports bra and stomach were showing.

Getti Kehayova, 43, from Las Vegas, Nevada, was hanging upside down from a set of monkey bars and hula hooping when her shirt slipped down, revealing the bottom of her white sports bra.

The mother, who holds the Guinness World Records for the largest hula hoop spun, was practicing when the stranger came over and started yelling at her about her ‘obscene’ outfit.

Another local captured the alleged confrontation on camera, and Getti shared the video TikTok, where it has gone viral.

Say what? Getti Kehayova, 43, from Las Vegas, Nevada, shared a video of herself being berated by another mother at a public park because her sports bra was showing 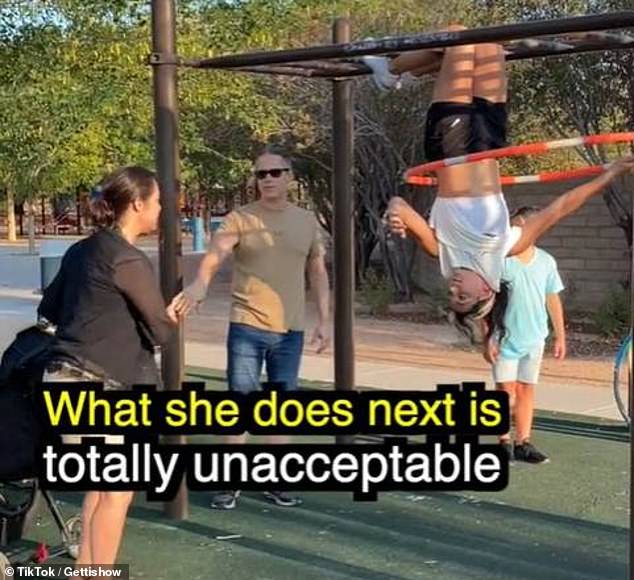 Angry: The unknown woman, who was pushing her child in a stroller, furiously pointed to her top that was sliding down while she was on the monkey bars 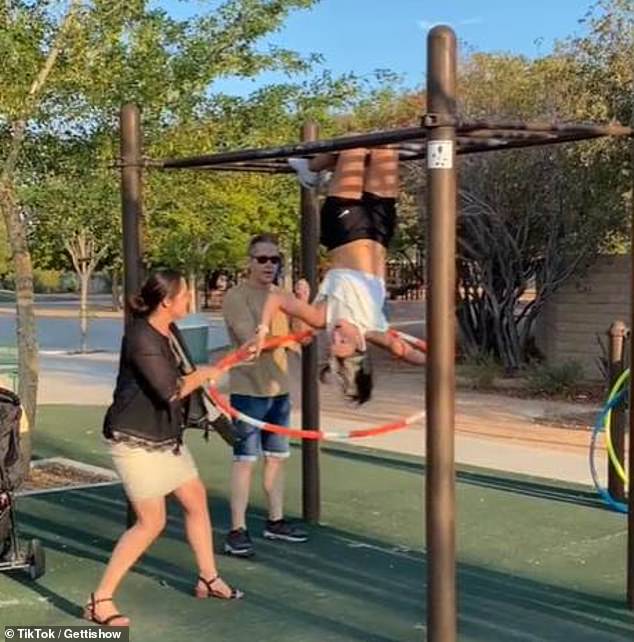 Wild: The stranger accused her of being ‘half naked’ and ‘obscene’ in the park before yanking her hula hoop off her

Getti had on a white tank top and running shorts at the park, and the only reason her sports bra was showing while she was upside down was because of gravity.

The unknown woman, who was pushing her child in a stroller, furiously pointed to her top that was sliding down while she was on the monkey bars.

‘Everybody around here is seeing this! You’re half naked right there,’ she screamed. ‘This is a place where kids play.’

Getti warned the woman to stand back while she was hula hooping, saying: ‘Watch yourself. I’m trying to film.’ But the woman wouldn’t get out of her personal space.

‘This is a place for family. You can’t be half naked up there,’ she continued to rant. She then turned to Getti’s husband, Michael, asking: ‘Are you okay with this?’

Getti tried ignoring the woman, but when the stranger caught her son filming her hula hooping, she started griping about everybody being on ‘the TikTok.’ 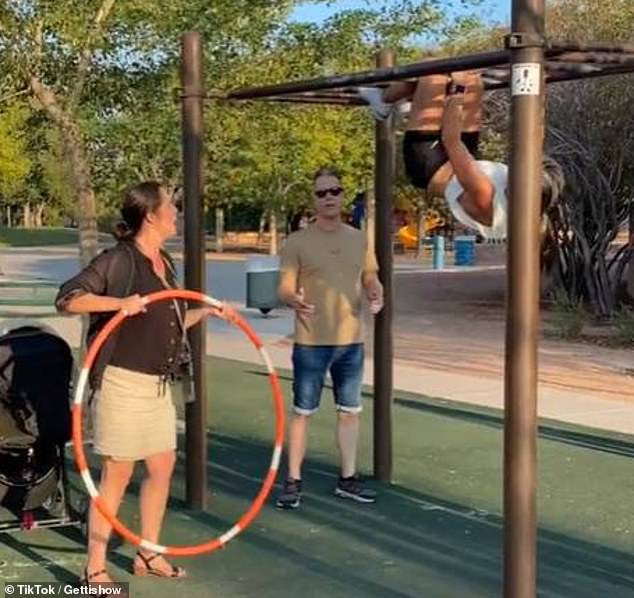 Showdown: Getti, who was joined by her husband and son, was forced to get off the monkey bars after initially trying to ignore the woman 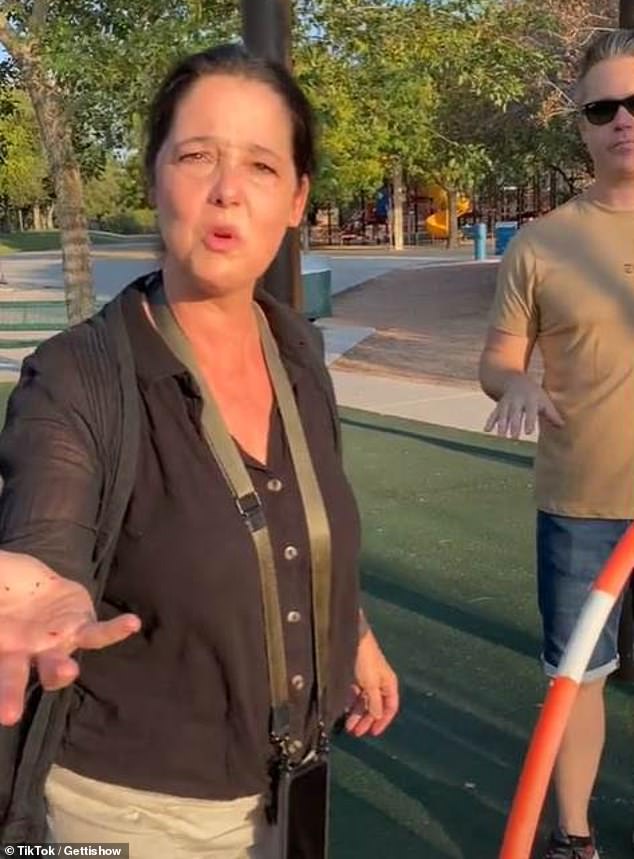 Caught on camera: The man who was filming the moment tried to intervene, and that’s when the woman started yelling at him, saying it was none of his business

‘This is where kids play, this is a place for families. That is so obscene,’ she continued. ‘I can’t believe you’re doing this in our neighborhood park with almost no clothing. That is totally revealing.’

Michael stepped between the woman and his wife while trying to de-escalate the situation. That’s when the woman claimed Getti and her husband were going to ‘wake up’ her baby — even though she was the one who was yelling.

The woman finally grabbed Getti’s hula hoop and tossed it on the ground, forcing her to get off of the monkey bars.

The man who was filming the moment tried to intervene, and that’s when the woman started yelling at him, saying it was none of his business.

She also screamed at Getti’s son to get away from her baby, even though he wasn’t doing anything. When the protective parents told her to back off, she yelled: ‘You people are off the charts.’ 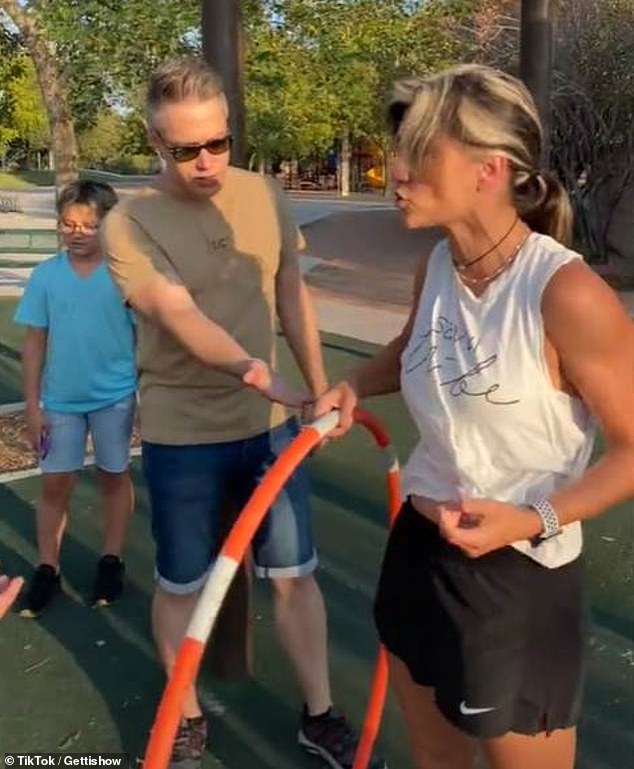 No reasoning: Getti once again tried to explain that she was just working out, but the woman wanted to know why she was wearing ‘revealing clothing’ 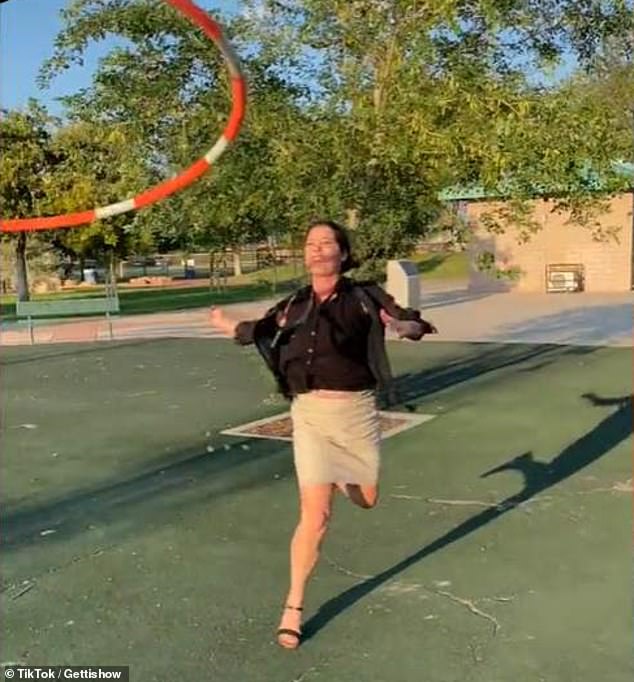 Outrage: When Getti pointed out that the woman’s clothing was just as revealing, she grabbed her hula hoop and threw it at a lamppost. The family then left the park 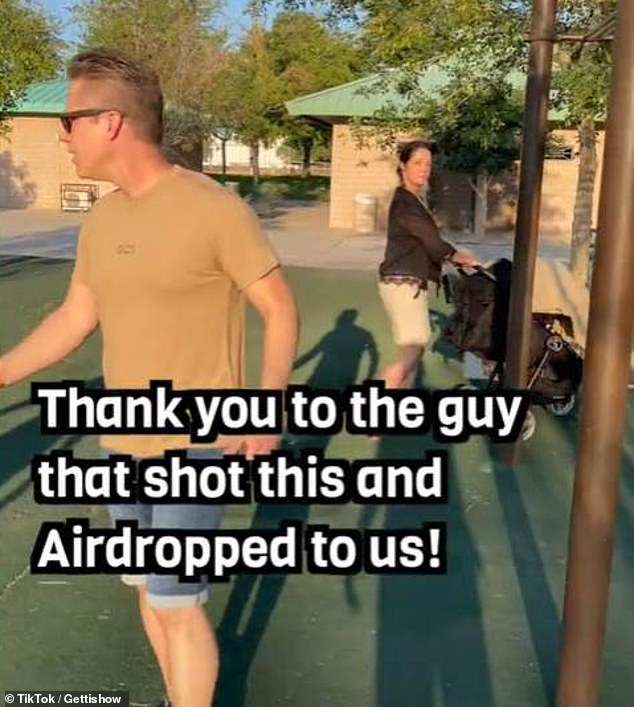 Going viral: Getti shared a video of the alleged confrontation on TikTok, where it has been viewed more than 2.4 million times, but some accused her of staging the scene

Getti once again tried to explain that she was just working out, but the woman wanted to know why she was wearing ‘revealing clothing.’

‘You’re wearing revealing clothing yourself,’ Getti hit back at the mom, who had on a cardigan over a sleeveless V-neck top and a skirt.

The woman then grabbed Getti’s hula hoop from her. ‘Let me show you what you can do for a TikTok,’ she said before throwing it into a lamppost.

‘Find somewhere else to bare your belly,’ she added.

That’s when Getti and Michael gave up on reasoning with her and decided to leave with their son.

When she posted the video on TikTok on August 29, she said she is ‘still shaken’ by the unprovoked confrontation. 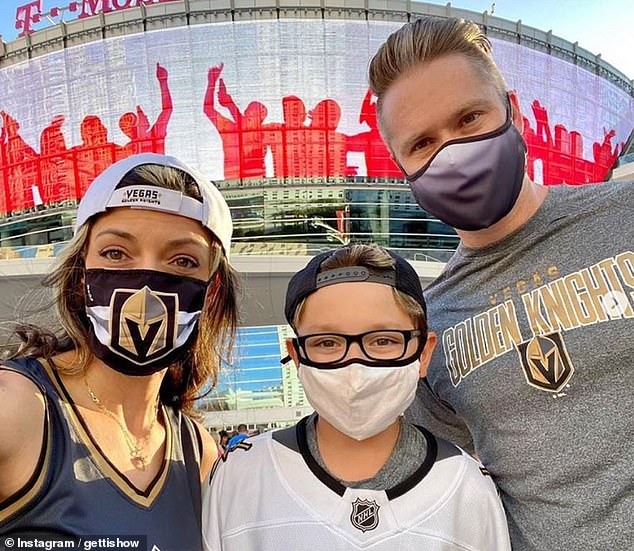 Hard to believe: Getti, pictured with her husband and son, insisted in the comments that the showdown was ‘no joke’ 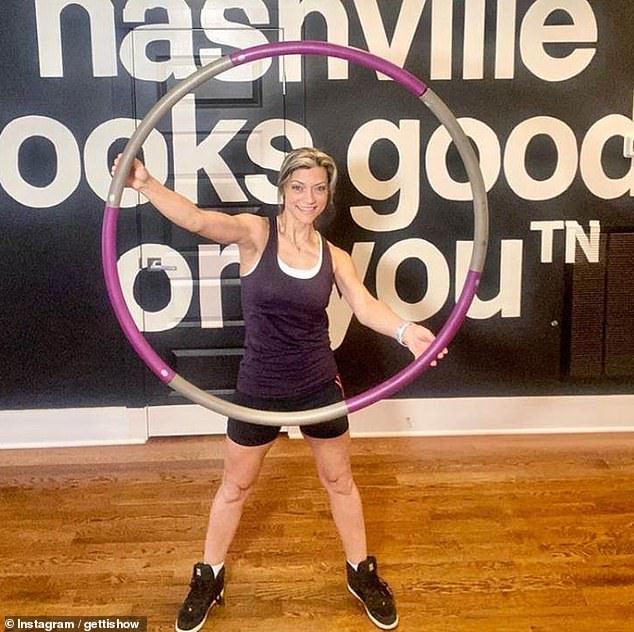 Social media star: The mother is a hula hoop instructor and has more than 1.2 million TikTok followers 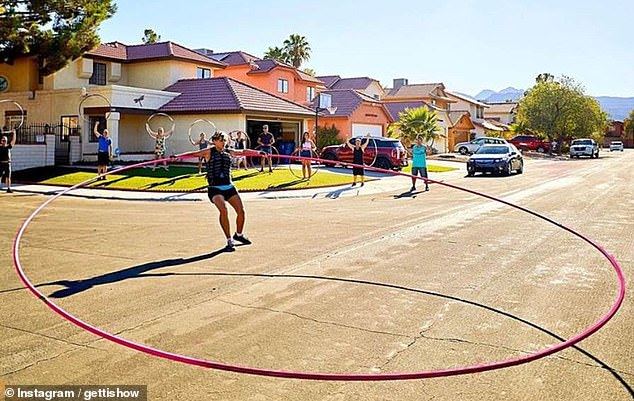 The TikTok has been viewed 2.4 million times and has received more than 14,000 comments from people who couldn’t believe what they were seeing.

‘Has she never been to a public swimming pool?!’ one person asked.

‘I could never imagine thinking someone’s stomach is more harmful to a child than her behavior and language,’ another added.

Others were convinced the video has to be staged, with one TikTok user saying it was ‘very much an acted out skit.’

‘No way this is real,’ someone else said, while another agreed: ‘This cannot be real.’

However, Getti insisted in the comments that it was ‘no joke.’