‘We need to do it a little bit better, especially than in the second half’: Virgil van Dijk insists Liverpool need improved performance in Porto to reach Champions League semi-finals

Liverpool defender Virgil van Dijk insists their Champions League quarter-final is far from won and they will have to be better in Porto next week if they are to progress.

Unlike their last-16 clash just over a year ago, when Jurgen Klopp’s side won the first leg in Portugal 5-0 to render the return fixture a formality, a 2-0 victory at Anfield still leaves some work to do.

Van Dijk knows they will have to put in an improved performance next Wednesday as their opponents have shown they can cause them the odd scare.

‘Obviously we know it’s going to be a tough game and to score two good goals was very important but the clean sheet was the most important thing,’ said the Holland captain.

‘We have something to build on. We kept pressing, we kept going – we played very well I think.

‘Obviously in the second half they tried to change it up a little bit: some moments of danger, but I don’t think there were any clear chances really.

‘But we need to do it a little bit better, especially than in the second half. It’s a good result and if we score one (away) then it’s going to be even more difficult for them to go through.

‘But the only thing is that we go in there to play our game, so hopefully we will create chances and finish them off. It’s going to be tough because their fans are pretty extreme, like here, and I’m definitely going to enjoy that.’

The result keeps Liverpool on track for a dream double as they lead the Premier League by two points from Manchester City. Van Dijk believes it is possible to win both.

‘We should be confident. It’s a great time to be a Liverpool player,’ he added.

‘Hopefully. There are (a maximum) of nine games left in total if all goes well, fingers crossed. Let’s give everything we’ve got and have a well-deserved break after.’ 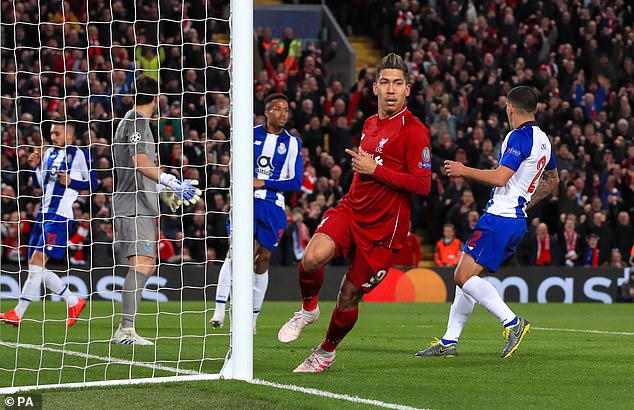 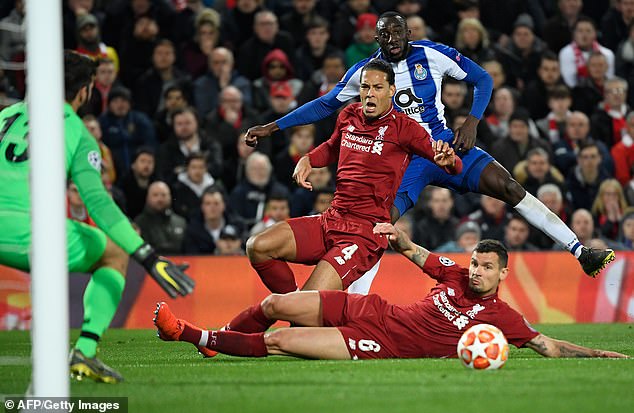 Roberto Firmino popped up with the second goal for his 14th in the Champions League for Liverpool and only Steven Gerrard (30) has more for the club in the competition.

The Brazil international has also cautioned against complacency next week.

‘It was an important victory. We’ve taken the first step,’ he told liverpoolfc.com.

‘We played well and we scored goals. Now we have to keep our feet on the ground because the next game will be difficult as well.

‘And we have to give it our all away at their stadium.’

Klopp has won 16 of 20 two-legged ties in European competition in his managerial career and he has never lost a two-legged tie as Liverpool manager in Europe, winning all nine.

And after extending Liverpool’s unbeaten European home record to 21 matches, winning 15, in a run stretching back to October 2014, the manager was satisfied with the advantage they take into the second leg.

‘Two-nil is a really good result. I would have bought it before the game and I will take it now! All good,’ he said.