For a moment, forget about the assassin. Mohamed Salah moved a step nearer to history at Selhurst Park, but this time it didn’t feel right to make him the focus.

The goal he scored — No 37 of this absurdly prolific campaign — settled a tense scrap with Crystal Palace, thrust Liverpool to within touching distance of next year’s Champions League and provided the perfect tonic ahead of Wednesday’s season-defining night.

He commands the gaze and carries the dreams of Liverpool fans ahead of the European showdown with Manchester City, but Salah alone will not take Jurgen Klopp’s team into the last four. So now is the perfect opportunity for another record-breaker to make a statement.

Virgil Van Dijk made history of his own on January 1, becoming the most expensive defender of all time. It is for occasions such as a Champions League quarter-final that Klopp invested £75million.

Van Dijk’s start has been solid, the crowning moment being a debut goal to settle the FA Cup third round tie with Everton, but the numbers don’t suggest he has made a major difference yet: Liverpool have conceded seven goals in the eight Premier League games he’s played, keeping three clean sheets.

Saturday was another mixed bag. He seemed distracted by Christian Benteke at points in the first half, and an error in the second period — for which he swiftly raised his hand to apologise — almost allowed the Belgian to profit. A forward in better form would have scored. 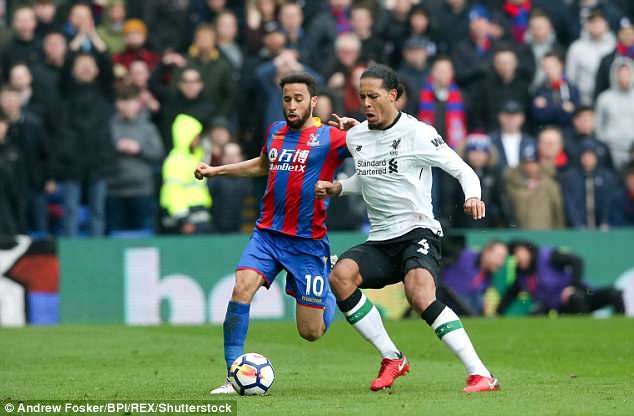 But then there were moments when you saw Van Dijk on cruise control, when he put his head or foot in at the right time and passed the ball with panache.

Van Dijk is about to be tested like never before, but, to talk to him, you sense that nerves will not be an issue. He speaks quietly and confidently and won’t be flustered when City, who were desperate to sign him, begin their pinball passing.

‘We know it’s going to be a big test with two hard games,’ Van Dijk said. ‘But these are the kind of games you want to be involved in and we’re looking forward to it. We will recover and then prepare right for Wednesday night.

‘Everyone wants to play in the Champions League. With the quality we have in this team, it’s where we should be every season. We need to keep showing that on the pitch. It’s very exciting. It’s the quarter-finals of the Champions League and I’ve never played at this stage before.’ 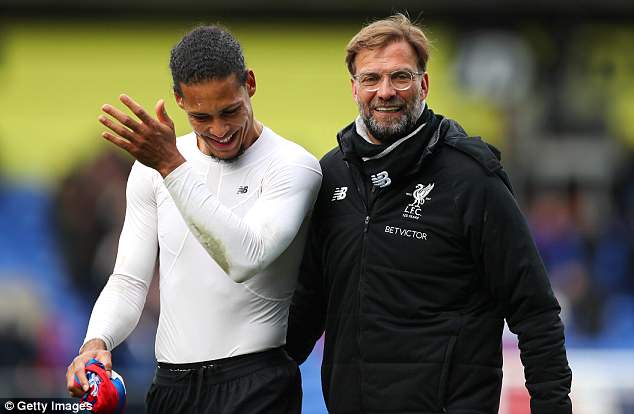 A 4-3 win over City in January has shown the Liverpool players what is possible. ‘I’m looking forward to playing in a fantastic atmosphere at Anfield and hopefully we will be enjoying it afterwards as well. We know they are beatable, definitely, but this is a different game,’ Van Dijk added.

His desire to keep things in perspective is admirable but for the 54,000 who will be squeezed inside Anfield, Wednesday is so much more. It is a night when reputations will be cemented and these opportunities do not come along so frequently.

The way they played, in parts, at Palace suggested they were distracted and Roy Hodgson, whose side battled with tenacity, must hope there is no lingering damage to confidence as they fight to keep their heads above water.

Liverpool did enough to grind out the win, which Salah secured after Sadio Mane cancelled out a Luka Milivojevic penalty awarded following a rash moment by Loris Karius.

But they will need so much more against City. ‘Do we know we have a chance? Yes,’ said Klopp. ‘Actually that was clear before but they are the favourites. At specific moments I think we are on a similar level but they have been much more consistent and that’s why they are about 20 points higher in the league.

‘We all know that in the game it doesn’t mean too much. We see our chance but we know it will be unbelievably difficult. But if I would have had the choice to watch a Champions League game on Wednesday, I would watch this one. There will be fire in the game.’

But there must also be ice. Van Dijk needs to be the man to provide it. 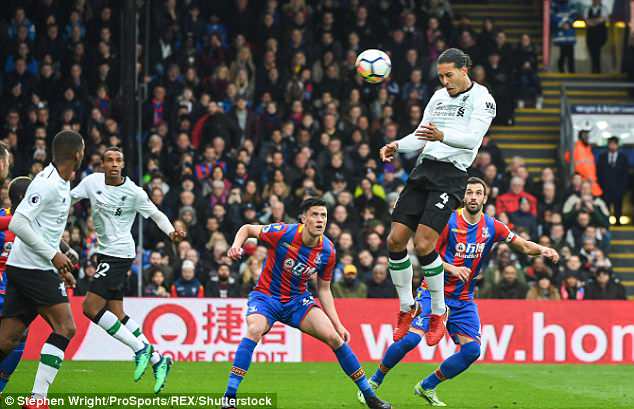