Play to the whistle. It is one of the most simple instructions in football, a command you will hear coaches telling schoolboys on every park across the country every weekend.

It gets drilled into them over and over to ensure that stupid mistakes don’t get made; carry on playing, do your job and do not stop no matter how aggrieved you may feel until the referee intervenes.

If it is that basic for those of a primary school age, surely the most expensive defender in world football would find it second nature? Ordinarily you would say yes but, for some reason, Virgil Van Dijk short-circuited in the second minute of the biggest game in which he has played. 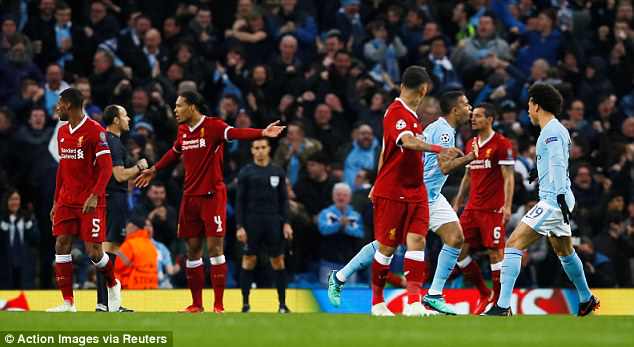 An innocuous push in the back from Raheem Sterling left him wanting a free-kick that did not come, Van Dijk was out of position standing on the touchline and as he looked on, Manchester City had succeeded in turning the second leg of this Champions League quarter-final into a frenzy.

The mistake was as untimely as it was unexpected. Van Dijk has been impressive, commanding, dominant – all the words Jurgen Klopp would have hoped to hear – since his £75million January move from Southampton.

He’s helped improve the numbers of Liverpool’s back four and lifted the levels of those around him.

‘It’s hard to put into words,’ said Jan Molby, the Liverpool icon. ‘You just know that everything is better when he is in the team.’

That is how it has been. Van Dijk was a player whom Pep Guardiola wanted to sign and had him scouted at Southampton as far back in November 2016, prompting Saints’ players to buy him a Manchester City shirt for a Secret Santa present.

But his ambition was always to join Liverpool once he learnt of Klopp’s interest and, steadily, he has been repaying the German’s faith, to the extent that the size of that colossal investment has barely been mentioned. 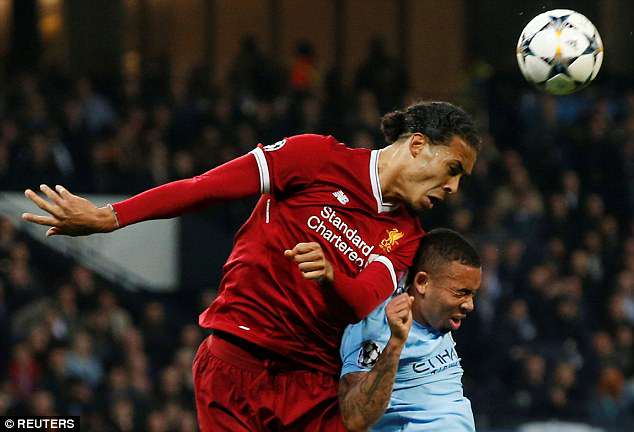 He knew, though, that it was going to be different at The Etihad. This was the kind of game in which he was brought to make a difference, to be a calming presence and provide leadership. Van Dijk has laughed off the idea he might be nervous during Monday’s press conference and insisted it was the kind of night to which he had aspired.

That is why it came as such a surprise to see him switch off so soon, to let City get the scent of blood. It was the kind of mistake that could lead some players to fold and for a couple of minutes you wondered what would happen, particularly when he shanked a clearance out of play.

In the main, though, he was always there with an interception when it was needed, helping Liverpool – just – to withstand the first half “thunderstorm” which Klopp had predicted would be coming. He played his part in ensuring his team secured their objective and they are now in the Champions League semi-finals.

If they are to go any further, however, improvement is still required.