Virgin Australia cancels ALL of its domestic flights apart from one

Virgin Australia has cancelled all of its domestic flights apart from one daily return service between Sydney and Melbourne.

The flight will run once per day, apart from on Sunday.

The move comes after the airline asked the government for $1.4billion to survive the coronavirus crisis.

Virgin CEO Paul Scurrah told the government the carrier didn’t need the cash immediately, but would do if the pandemic continued beyond six months.

‘We have been in ongoing discussions with government about the support the whole industry will need if this crisis is prolonged,’ a Virgin Australia spokesperson previously told Daily Mail Australia.

Prime Minister Scott Morrison closed Australia’s borders in response to the crisis after seeing figures which suggested the overwhelming majority of COVID-19 cases in Australia were brought in from overseas.

The decision instantly stripped tens of thousands of airline staff, travel agents and others in the industry of their jobs.

Virgin alone was forced to stand down 8,000 staff members without pay when it grounded its entire fleet of 125 planes.

‘Companies like ours are taking a range of measures to respond and manage the financial impact,’ Mr Scurrah said.

‘However, the support we’ve proposed will be necessary for the industry if this crisis continues indefinitely, to protect jobs and ensure Australia retains a strong, competitive aviation and tourism sector once this crisis is over.’

Under the proposal, the government would take an ownership stake in Virgin if the airline was unable to repay its debt within three years.

Mr Scurrah described the situation in Australia and globally as unprecedented.

‘There has never been a travel environment in Australia as restricted as the one we see today and the extraordinary steps we’ve taken have been in response to the Federal and State Governments’ latest travel advice,’ he said recently.

‘We are now facing what will be the biggest grounding of aircraft in this country’s history.’

So far, there are 6,089 known cases of coronavirus in Australia, including 51 fatalities.

While concerning, the figures are far greater in other parts of the world, particularly European nations and the United States.

In America, there are currently more than 435,000 cases, while Spain, Germany, Italy and France all have more than 100,000 infections.

International travel has been halted in most corners of the globe to slow the spread of the virus. 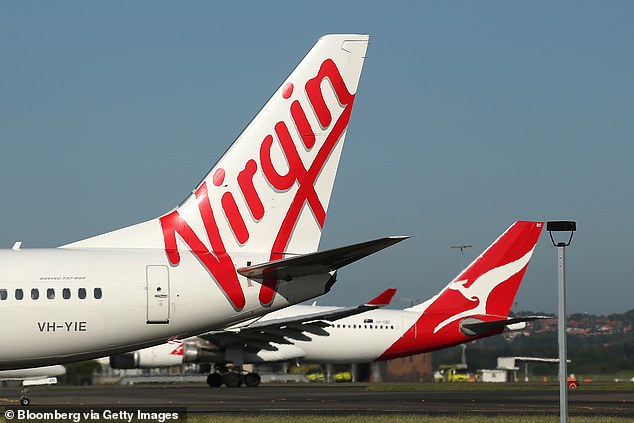 Virgin Australia accused its rival, Qantas, of spreading rumours it would collapse following the decision to suspend services.

Both carriers have suspended international flights until at least mid-year.

Virgin Australia complained to the Australian Competition and Consumer Commission after Qantas chief executive Alan Joyce told Sky News it would be unfair for the government to effectively nationalise Virgin to stop it from being placed into administration.

‘Whatever aid is given to one company has to be given to every company in that sector.’

‘The complaint that we’ve had from Paul Scurrah is that Qantas is engaging in anti-competitive conduct, designed to damage Virgin as a competitor,’ he told the ABC.

‘We have to look at whether the behaviour has the purpose or the effect of substantially limiting competition.’